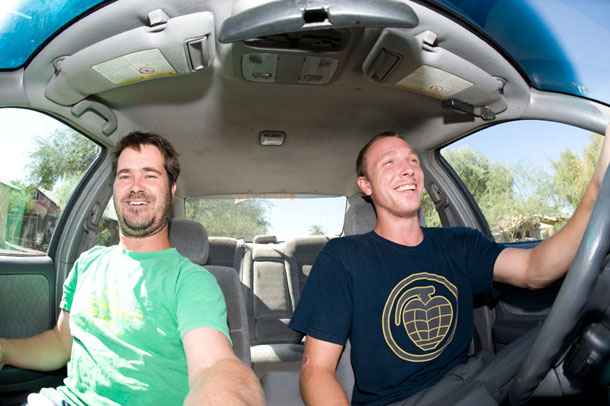 "Wake up, meet up with people, figure out where to skate"

A GOOD TOUR GUIDE for a city is hard to come by. Sure, there’s always a guy who knows where the spots are, but you always run the risk of the guy being a bit on the—dare I say—kooky side. Either he wants to hold out on some spots or he thinks that it’s his time to show the visiting pros what’s up. Robbie Brockel is neither of those. These photos show that he can rip the spots he takes visitors to, but ask anyone who he’s shown around and they won’t feel like he’s trying to steal the show. He’s just going to skate along with them. He’s not going to hold up the crew that’s in town for a day at a spot that he can skate at any time. On top of all that, he’s pretty mature for his age. A great guy to take on the road. Always down to drive a shift in the car and not run it off the road. Down to kick it at the party, sleep on the couch, but he never wears out his welcome. He’s my go-to tour guide when people come to town, and if there’s a spot in the car for a road trip, he’s the first guy I call. —Joe Hammeke

What’s an average day like?
Wake up, meet up with people, figure out where to skate, end up at a skatepark at night.

Which park do you usually end up at?
Union Hills skatepark in Glendale, by my house.

Who do you usually meet up with to skate?
Phil, Andrew, and Dave Haefer.

When did you graduate high school?
2008.

Are you back in school now?
Yep, but just taking some regular classes.

You took a year off?
Yeah. I just traveled and skated. Went to Minnesota, Denver, Albuquerque, San Francisco, and Oregon. 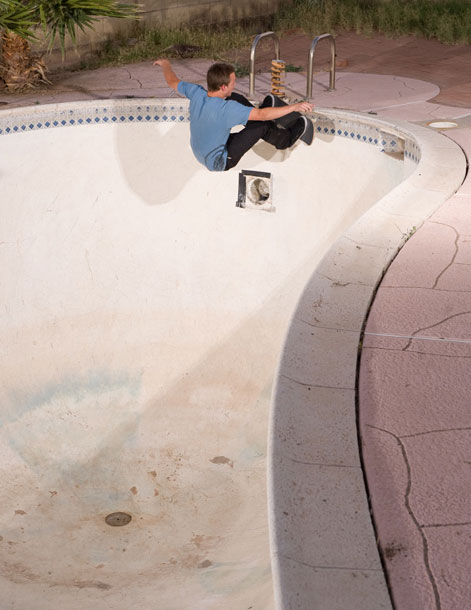 Why didn’t you skate the Bust or Bail contest?
I was about to and then Moose started trying the 360—which was what I was going to try.

How close have you come to a back three down the Tucson Courthouse?
Pretty much as close as you can come without rolling away.

How many times have you tried?
Been there two times; not sure how many tries.

How many have you landed on?
Over 20, but I just can’t get it to roll away.

How did you get into the bars for Angel Ramirez’ 21st birthday blowout?
I got a fake ID that says I’m 36.

How does someone get away with an ID that says they’re twice as old as they really are?
I have no idea. Except it kinda looks like me. It was issued nine years ago, but it doesn’t expire until 2038.

How do you know where all the AZ spots are?
Just years of skating around the city. Friends find them and let me know about them.

Is there ever a spot that you can’t locate?
No, ’cause I got reliable sources. I can always find them somehow.

Do you have a day job?
I work at Cowtown. Just a couple days a week.

I hear your brother is quite the football player.
He plays for Boise State, the Broncos. He’s the number-one ranked fullback in the nation.

Is he looking at a pro career after college?
A couple teams have been talking with him.

Who sponsors you?
Real, Spitfire, Thunder, Circa Combat, and Cowtown.

How’d you get hooked up?
PHX Am 2006—I won best trick skating a Real board. Jim hit up Laura from Cowtown and they started sending me boards.

What’s the Brockel flip?
I think that’s what some people call it. I guess it’s what I did at PHX Am 2008 best trick. It’s a bigflip with an extra turn—a bigflip 360? I’ve even heard it called a Gazelle Flip.

Anyone you want to thank?
Friends, family, everyone at Cowtown, John and Darin at Deluxe, and Andrew and Mario at Circa.