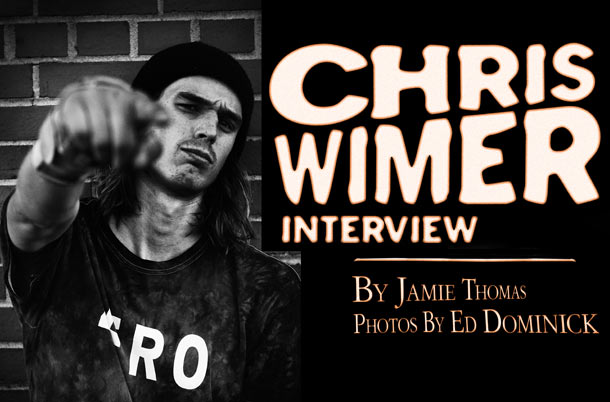 Jamie Thomas sits down with the Zero Army's latest recruit to discuss his hard-charging “No Cash Value” Part. Producing a part for Zero is a big deal. It instantly signifies you went full-psycho on your skateboard. Here's an interview with the ripper himself.

So this is history in the making. Let’s start off with the basics: how old are you, where are you from and when did you start skating?
I’m 22, I’m from Virginia Beach, Virginia, and I started skating when I was about 11 or 12.

What got you into skating?
I think my mom's friend's son had a board and I kinda just used his and picked it up from there. Then I got a board the next Christmas and it just stuck—skating over manhole covers in the neighborhood.

Who were your influences growing up?
Pat Burke was a big influence, locally, and after I saw Kids In Emerica I was hyped on Reynolds and Leo. 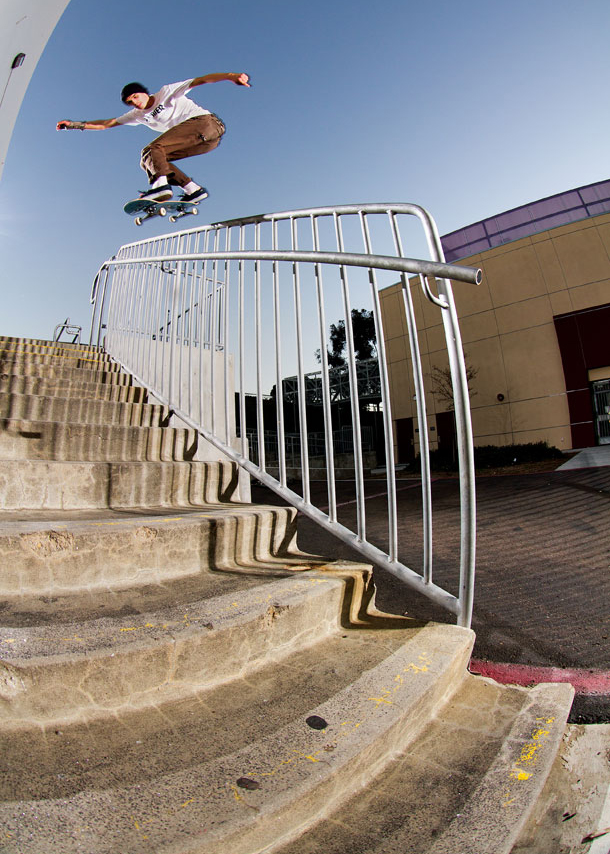 Did you skate with Pat growing up?
Nah, not at all. I used to go to this website vafleezers.com and there would be montages with Pat and all of the local dudes. That was the crew that me and my friends looked up to.

When did you first get sponsored?
I got sponsored when I was 13 by this shop called Hotline. it doesn’t exist anymore.

How did you start getting stuff from Zero?
My homie Stephen Mullen was riding for Mystery and he put in a good word with Bama, the Zero Team Manager, and sent him a link to my footy. He hit me back a few days later and it’s been going ever since.

Why did you pick Zero to send your footage to?
I always looked up to the Zero dudes, for sure, but Stephen kinda guided me there. I know Zero is picky about putting people on, so I didn’t think I had a chance, but it was worth a shot. 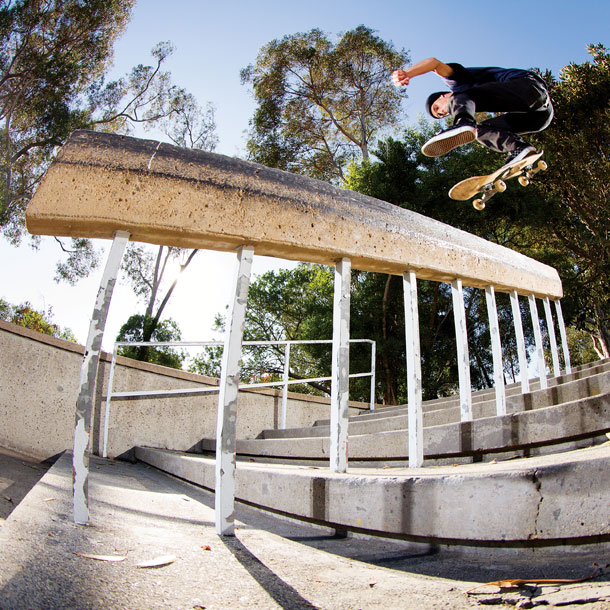 You were on flow for several years. Why do you think it took so long to officially get on the team?
Well, I guess coming from the East Coast probably had something to do with it 'cause I wasn’t in California very often and it took a while to get to know everyone. I got a call from Ryan Bobier one day and he asked if I could go on the Cold War tour and that was the first day I met everyone.

How was that tour for you?
It couldn’t have gone any better. I had no idea what to expect. I couldn’t believe I got money for food. It was the first time I ever got money from skateboarding. We went through the South and into Raleigh and it was cool to see everyone and skate some of the spots with the team that we’ve been skating for so long.

Of everyone on the Zero team, whose approval do you think was the hardest to earn?
Dane, hands down. He was also the one I was most nervous about meeting. All I had heard was how much of an asshole he was, but he’s a cool-ass dude. Well, until he watched me type in my password on my phone and then I fell asleep and he posted his nuts on my Instagram and sent pictures of himself to my girlfriend. When I woke up I had a shitload of notifications and I looked at my photos and it was just his nuts chillin'. Brass commented on the photo, “nice hair.” Dane's cool as shit, but he can definitely rub you the wrong way.

Were you pissed about all that?
I wouldn’t say pissed, but I was definitely irritated. I got over it, though. 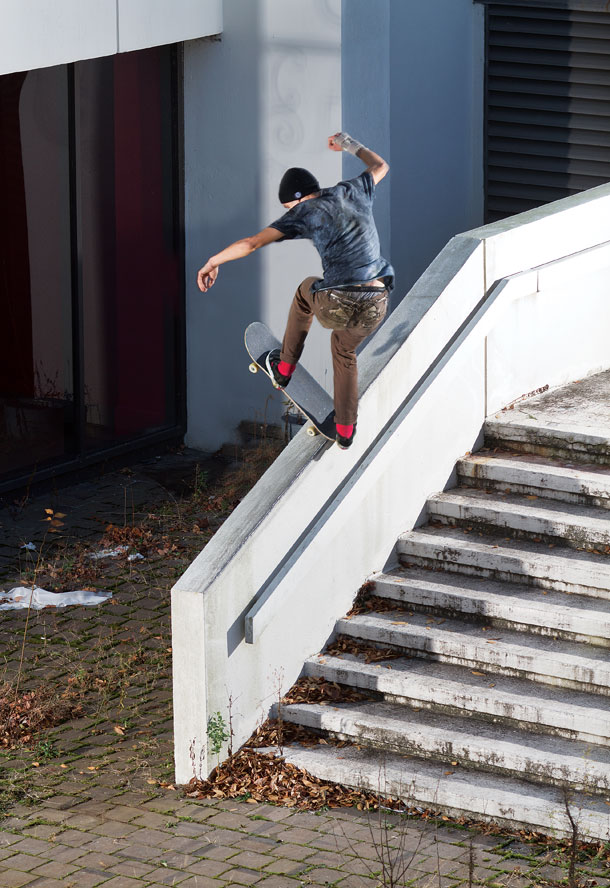 Don’t you think that’s the role of the new kid?
What, to get picked on? Yeah, I’d probably say so. I feel like anyone going on a tour and meeting dudes for the first time is going to get picked on.

Seems like you discovered a ton new things that were pretty basic on that trip. For example, you were tripping out on pita bread like it was the best invention ever. Had you really never seen or heard of pita bread? Didn’t they have that when Jesus was alive?
Well, that was the first time I’d heard of it and tried it. Yeah, that shit’s good.

How do you think you made it to be 20 years old without ever seeing pita bread?
I have no idea. Maybe I’d seen it but didn’t pay attention. Someone shared some with me and I was shocked how good it was. At that same meal, I had a large Dr. Pepper and it was in a styrofoam cup and Dane poked a hole in the bottom of it when I wasn’t looking and all my soda drained out on the floor.

That’s a classic move. How did you figure out what happened?
Well, it was a fully-filled large soda and I took one sip then set it down. Next sip it was was empty. I couldn’t figure it out and I looked at the bottom and saw that it had a hole in it. I didn’t think anything of it, so I got up and got another cup and then ten minutes later it happened again. I looked at the bottom of the cup and everyone just started laughing.

You got any more Dane stories from that trip?
Yeah, I do. We were in South Carolina and I had a super-gnarly hipper and we were walking back to the van. Dane came running up behind me and slapped the shit out of my hip with his insole. I was instantly pissed. I asked him why he did it and his response was, “Stop being a pussy!” I just got in the van. I wanted revenge, but I barely even knew the dude and I didn’t want to get into a war. 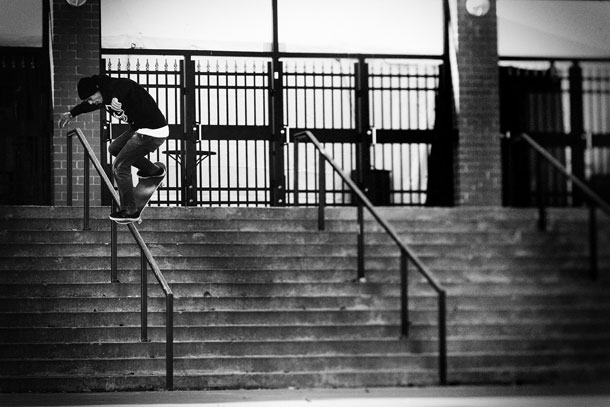 Okay, let’s talk about your new part. You only had three or four months to film your No Cash Value part and you had a job the whole time. How hard is it working a full-time job and trying to film?
Definitely hard at times, especially when you can’t get time off. But luckily my boss let me take off two to three days a week and I was able to spend those days filming. I wash boats and when winter time came I got more time off 'cause work slows down. I went to North Carolina every weekend I could and then me and my friend John took a trip to Florida and the weather was perfect. That’s probably when I got the most done.

Do you have any goals for skateboarding or are you just going with the flow?
I’m not very good strategizing or planning, so in that aspect I just kinda go with the flow. But I definitely do have goals of becoming a professional skateboarder one day, but 'til then my goals are just to skate as much as possible and be the best I can.

For a long time you were adamant about staying on the East Coast, but recently you’ve been talking about moving to California. Why the change of heart?
I don’t enjoy flying and I know overall it would make it easier for everything I’m trying to do in skating. Also, my girlfriend wants to become a nutritionist and I feel like it would make more sense for her to do that there, 'cause people here aren’t too concerned about nutrition. The weather is also nice. But if we do move I’ll definitely miss the seasons.

Do you feel any pressure to get gnarly from some of the past Zero team and videos or is that something you look forward to?
I feel like there's a standard or a legacy to live up to based on all of the Zero videos, but that pushes me and intimidates me in a way. I feel like it will help me out in the long run, though.

Who are your favorite people to skate with?
Back home: John Evans, Blake Scott, V-neck and Kevin Love when he’s in town and a bunch of my homies from North Carolina and Virginia. When I’m in California, it’s sick to go out with Brockman, Brass, Kurt, Buya and Forrest. He always keeps it interesting.

What is your definition of success?
Achieving all of the goals you set for yourself. 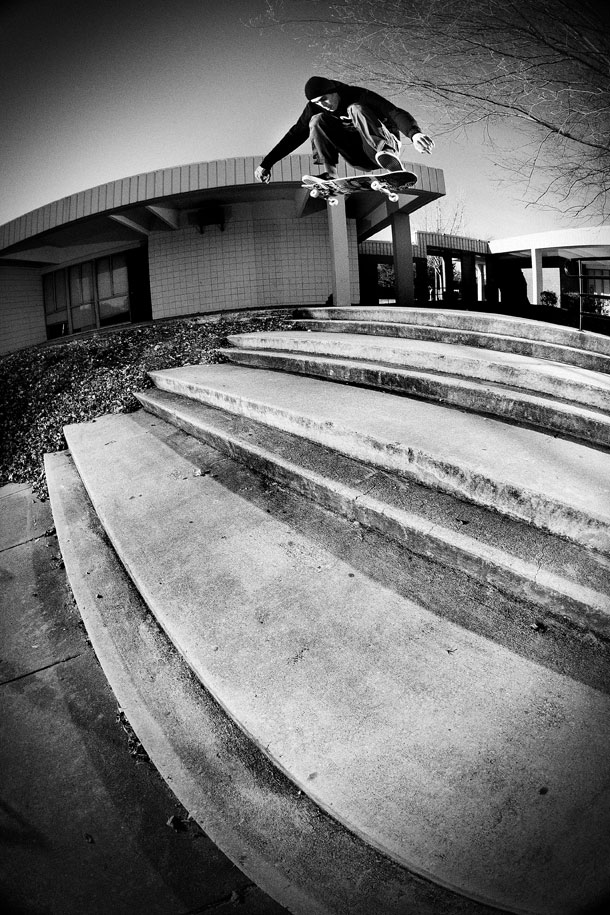 What is skateboarding to you?
Skateboarding is having as much fun as possible with your friends and staying productive.

Is there anyone you would like to thank?
All my friends, my family for supporting me, can’t thank all my sponsors enough for keeping me rolling: Zero, Vans, Thunder, Spitfire, Altamont and Cardinal skateshop, my homie John for filming me in 20-degree weather. Everyone that’s helped me along the way and my girlfriend Kayla for taking care of me and being there every step of the way.