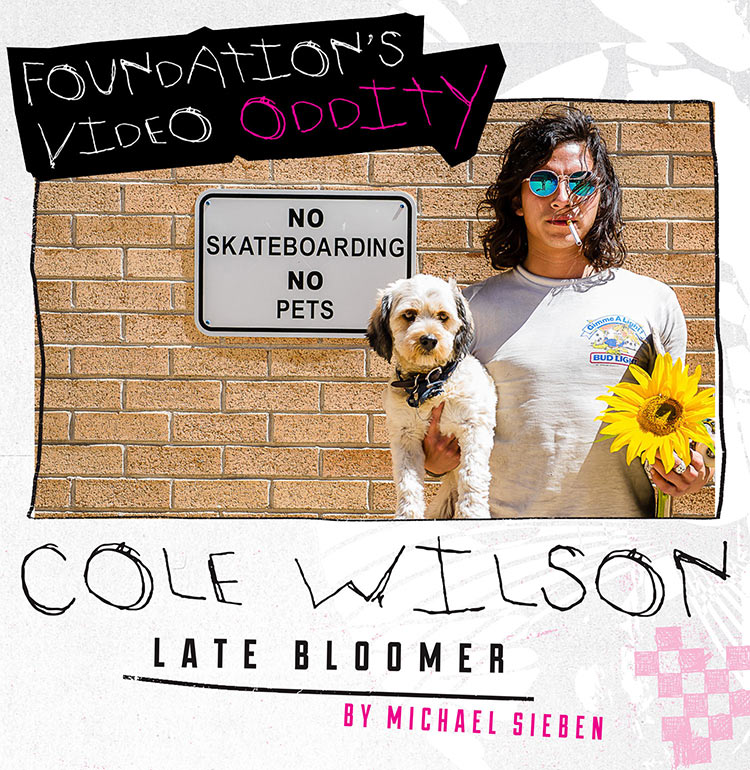 So you just turned pro. How has your life changed?
Nothing has really changed. My parents are pretty psyched for me. Skateboarding kinda looked different for the first couple of weeks. I’d look down at my board and it just kind of felt different.

Because it had your name on it?
No, not even that, just skateboarding itself looked different. It almost got more fun. After I turned pro I just skated every single day—trying to learn tricks again, little-kid style. 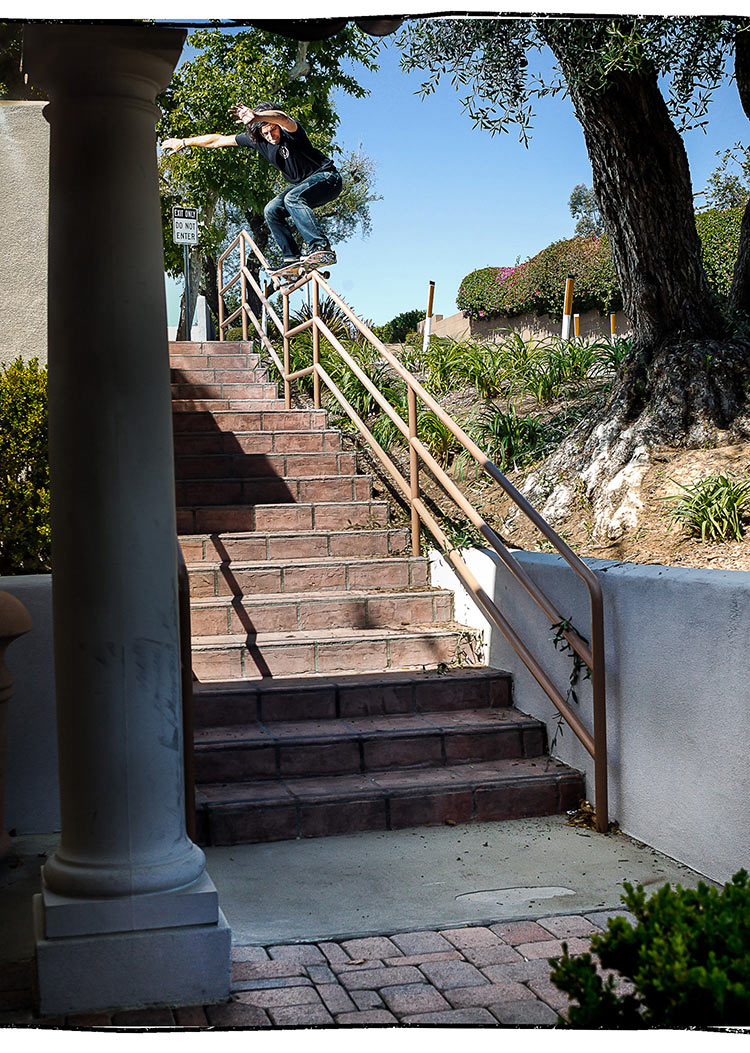 Hope you're feeling kinky, 'cause Cole is here to grind through every angle on Earth. Backside 50-50     Photo: Karpinski

Did it feel like the pressure was off? Did it feel like you’d reached your goal and now you could breathe a sigh of relief and have a moment of reflection?
Yeah, actually you nailed it with that. And that turned into, oh shit, now I’ve got this gnarly responsibility.

Are you ready to live up to this responsibility, Cole?
I’m gonna try my fuckin’ heart out. 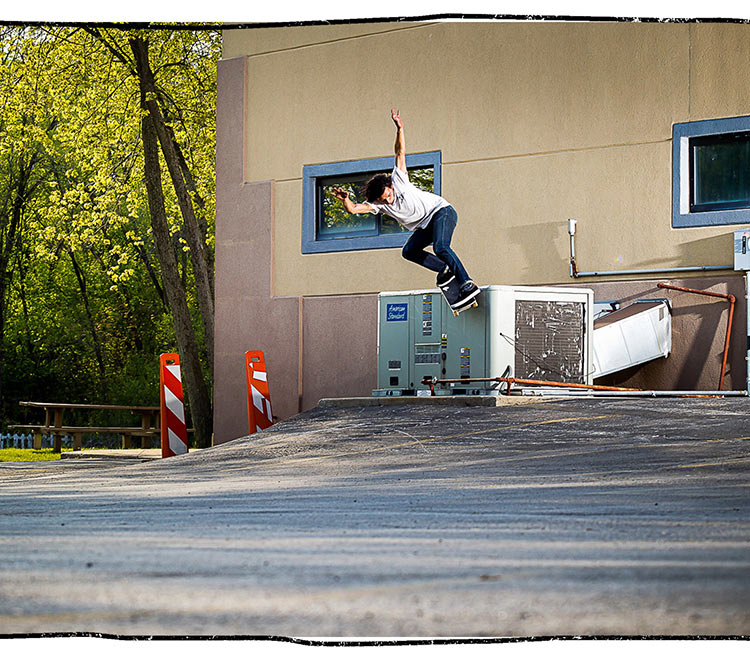 Back Smith on the AC unit. V chill     Photo: Karpinski

Long term, do you have any career goals as far as being a pro skater?
Yeah, I’d be down to have a tranny part or just something different than just handrails. Jeremy Leabres has me juiced on skating tranny, so I think that would be dope. Kinda like Mumford style. 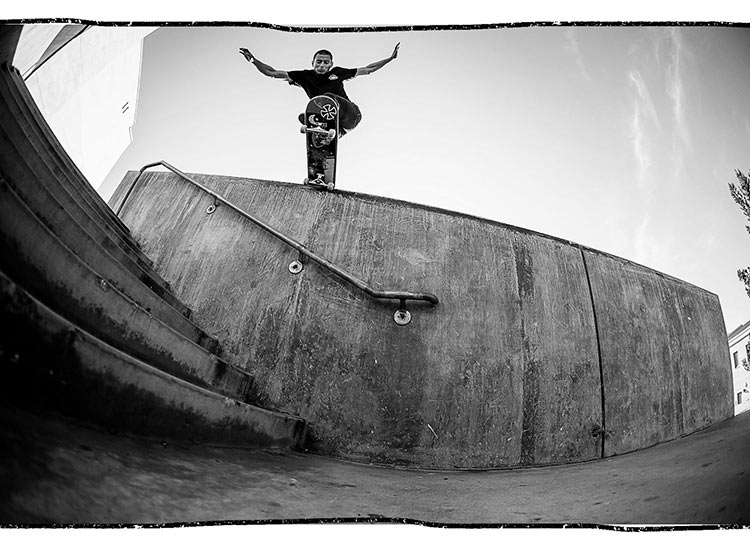 Spread your wings and slide! Backside tailslide on the high dive     Photo: Bradford

So is this really your first full-length video part?
In a big brand’s video, yeah.

Was it more stressful filming for this project than, say, a homie video?
No, it wasn’t really stressful. It felt the same. But I’m scaring myself more often now that it’s a career. 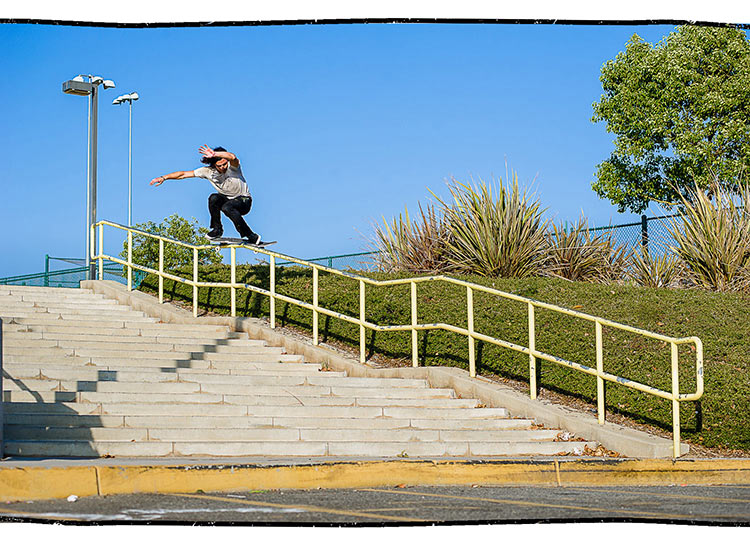 Making up for lost time, Cole holds a high feeble for the full length    Photo: Gould

Before Sinclair hit you up, had you kinda accepted the fact that skating wasn’t going to work out in terms of it being a job?
Nah, I wasn’t even trying. I was just skating because it’s the best thing on Earth.

So it was just a pleasant surprise that you got hit up by Tum Yeto?
Yeah, exactly. I was getting boards from Gary Collins’ brand out here, Instrument, but I never knew if it was gonna work or not. But then Sinclair hit me up and asked if I wanted to start getting Foundation boards and I was, like, “Oh yeah, I’m down.” 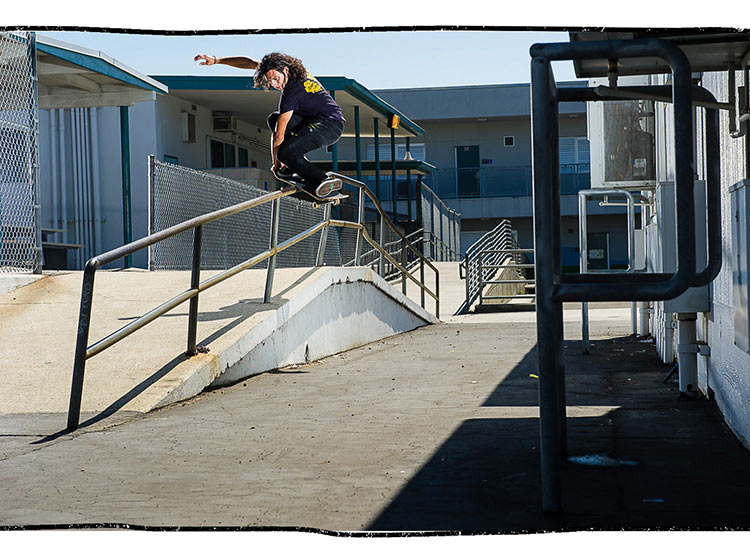 This feeble was looking pretty precarious so Cole slapped a seatbelt on it    Photo: Gould

If that hadn’t happened, what do you think you’d be doing in Kentucky right now?
Probably just construction jobs or something. Maybe working at a coffee shop? I couldn’t even call it. 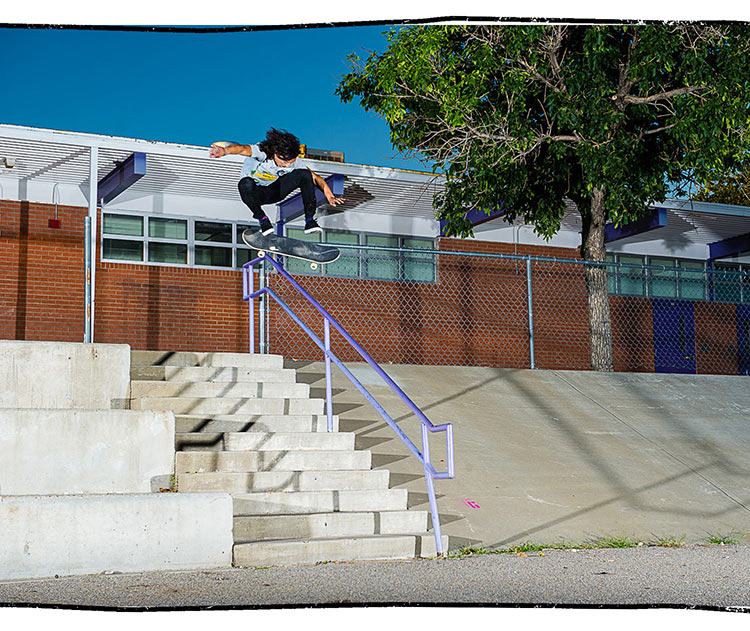 He's normally assaulting them but Cole took pity on this rail and kickflipped over it. He stomped that bank's ass, though      Photo: Gould

You’ve got some crazy stunts in your part. What do you step to next? Got any tricks or spots in mind that you want to hit up for your next project?
Definitely more tricks. I don’t have any spots in mind, but just more variety. After this video comes out, I want to watch my part and think about things that aren’t in there.

Just mix it up. Not put out the same part twice.
Yeah, not be repetitive. 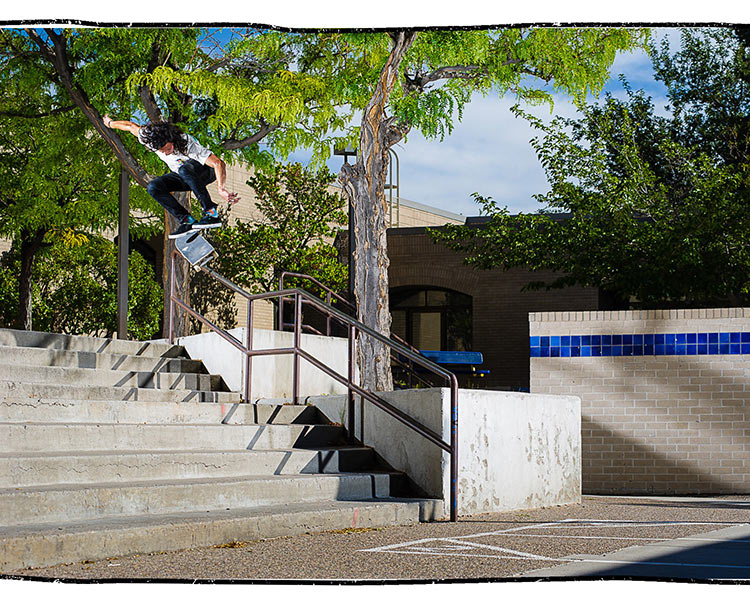 Are you already working on a new project—besides your tranny part?
I have a Real Street part coming out in March. And I think we’re going to try to do another Foundation video before the end of the year.

Another full length?
Maybe not full length but just keep the content coming out. 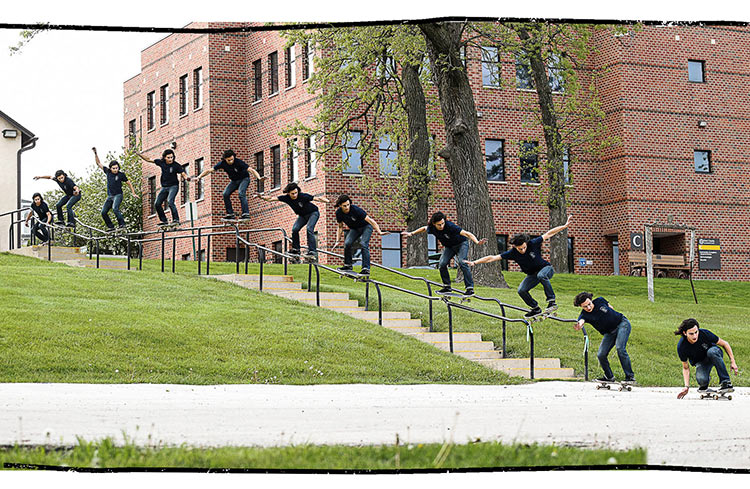 He was filming for Oddity but this 50-50 is definitely WTF! territory.    Photo: Karpinski

Have you seen the whole Oddity video yet?
I haven’t seen it all edited but I’ve seen all the footage. And Ryan Spencer—I can’t wait for his part. His whole style, just how he goes about it—

He’s got that surf style, right?
Yeah, it’s the surf vibes. But he’s still getting gnarly. 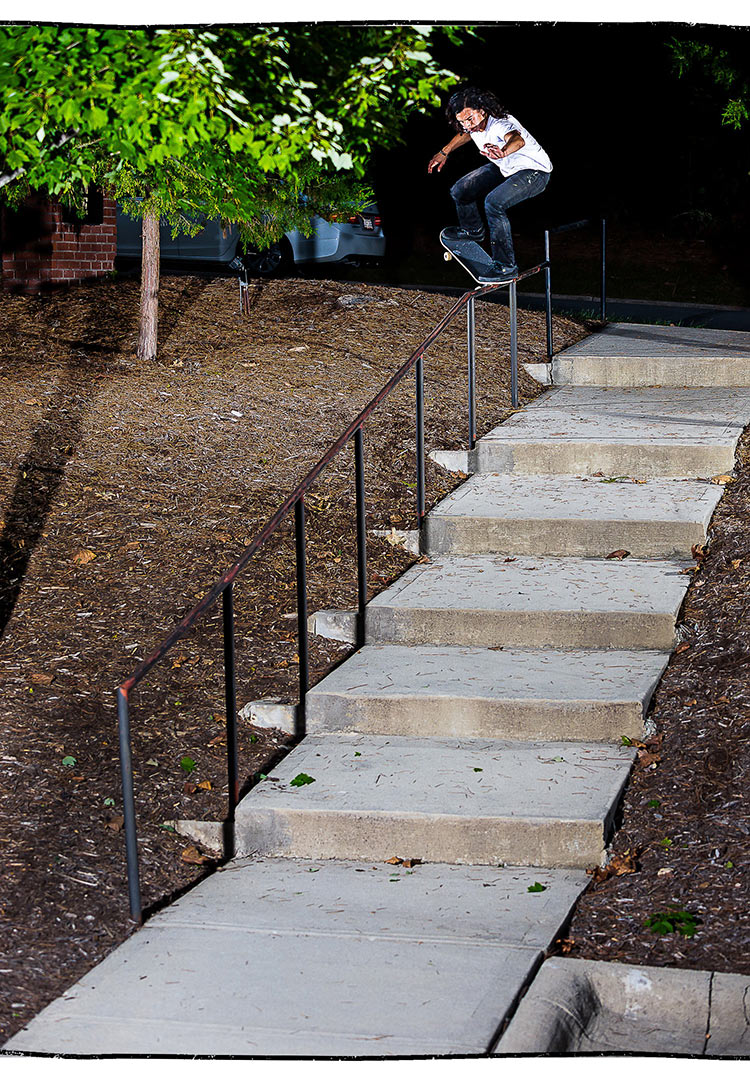 It's all in the pinch. Frontside nosegrind, heel over wheel     Photo: Rodent

Why do you think the video is called Oddity?
I think Sinclair came up with that. But I think Foundation is just an oddity in itself. You look at the history of it and it’s all over the map. But so many of my favorite skaters have skated for the brand. We’re just oddballs, man.

What’s life like after dating a famous LA fashion heiress?
Really no different. It just gets brought up from time to time.

Okay, last one: what’s your advice to the kids out there working their crappy jobs who are dreaming of someday being a pro skater?
Man, I don’t want to say anything too cliché, like, “Don’t think about it. If it happens, it happens. It’ll work itself out.” Just don’t bum yourself out if it doesn’t happen and you’re stuck working your shitty job. Because skateboarding is supposed to be our way out of reality. 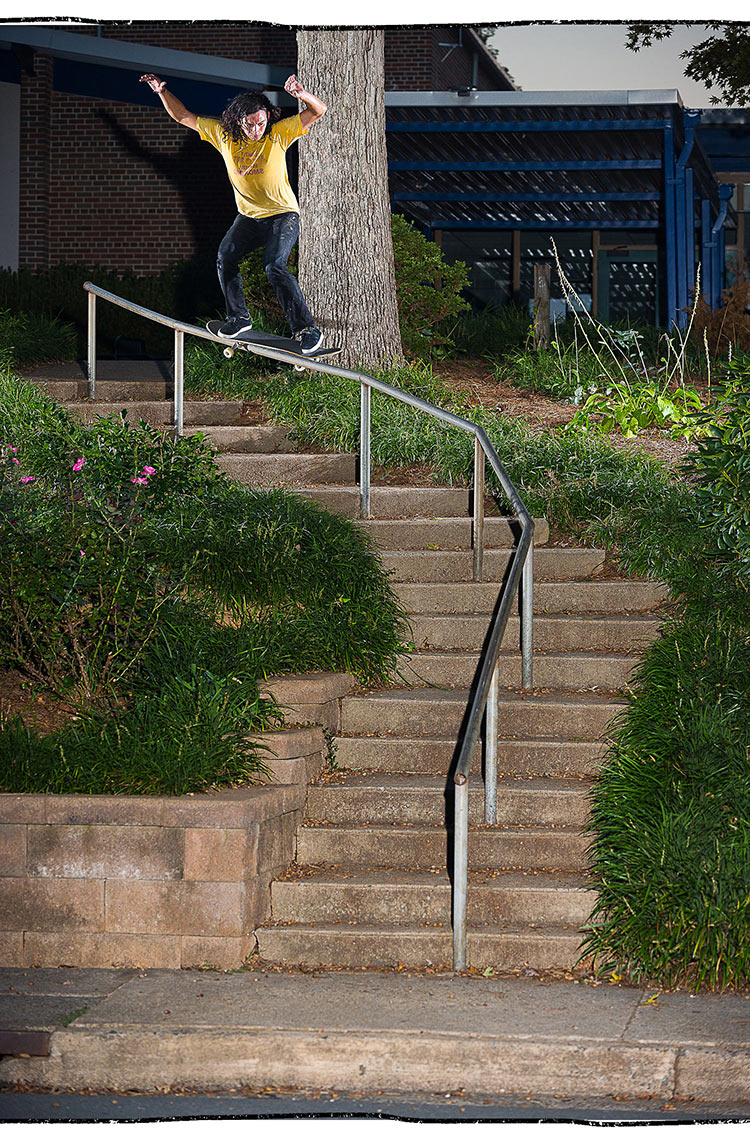 Closing the curtains with a sick Smith down the serpent's spine. We love you too, Cole     Photo: Rodent

Last words?
I love you all.