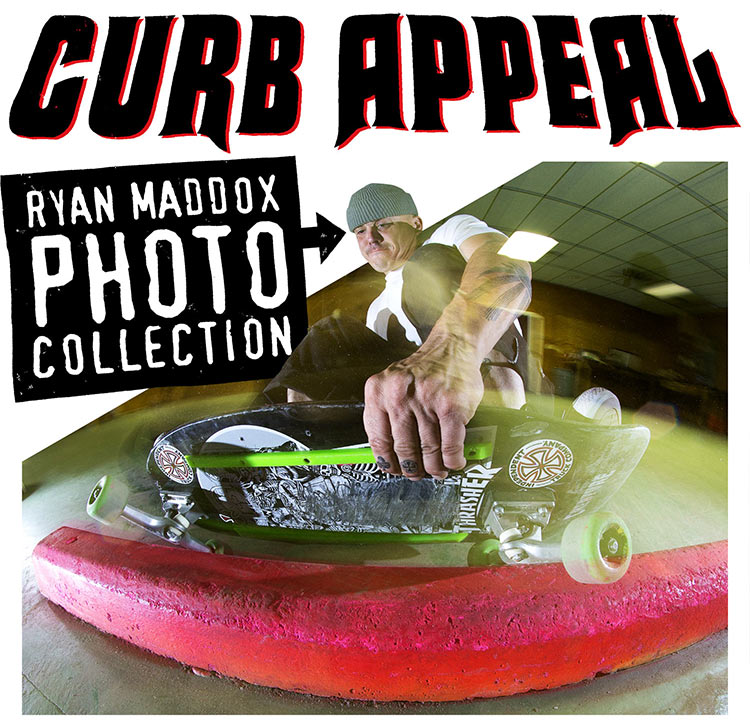 SKATE PHOTOGRAPHY is a tough gig. The timing of a shot can be unforgiving to the point of cruelty. If your trigger finger is a millisecond early or late, the photo will be garbage. And with dangerous, high-stakes spots, this pressure is cranked to the boiling point. Curb skating, however, is on the other end of the spectrum. It is essentially the smallest terrain that can be ridden. Everyone knows that bashing a curb is a feel-good endeavor, but the camera usually stays in the bag. The assumption is that an ankle-high environment just isn’t worthy of photography.

Ryan Maddox explores this overlooked opportunity, on both ends of the camera. Of course, he is by no means the first to document skating’s most-humble obstacle. However, the way in which his pics confront the moment of impact allows curbs to become mountains and small collisions to become earthquakes. He captures in fresh detail the explosion of stoke that is generated with every curb crunch. —Adam Creagan 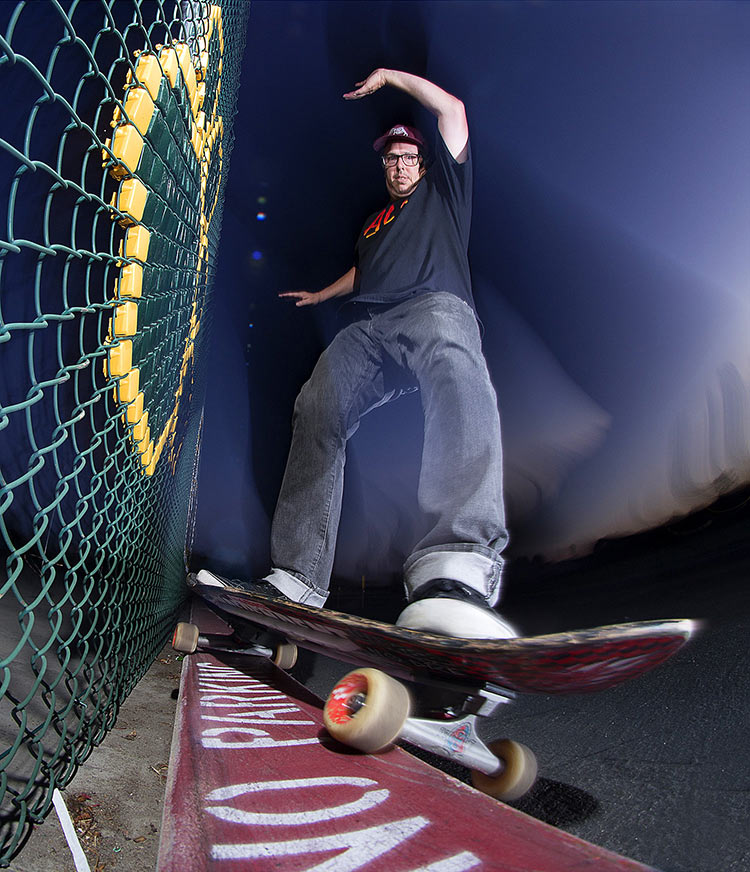 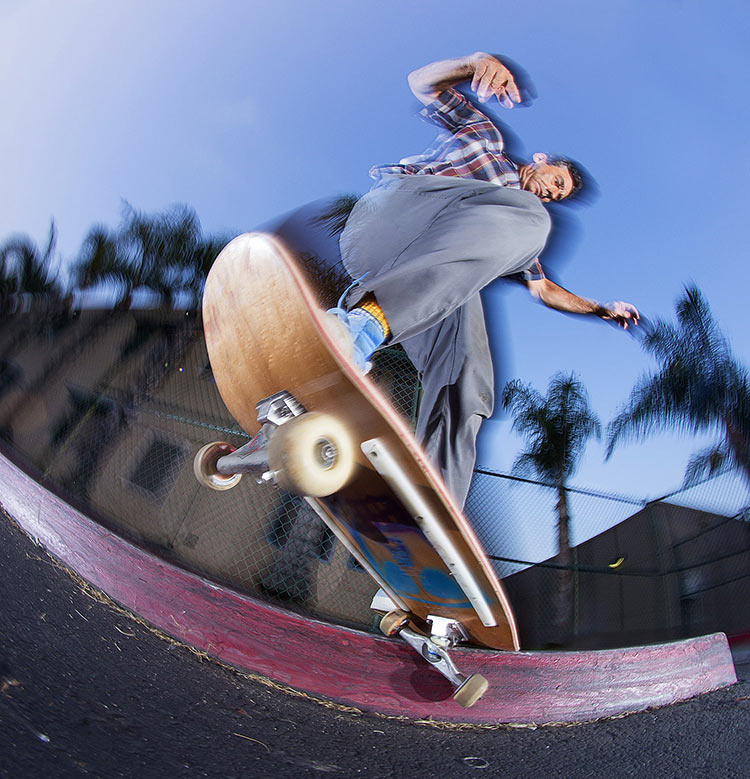 You shoot a lot of skate photos. Were these curb pics a natural part of your rotation or was it a theme that you focused on?There’s a lot of different kinds of skateboarding and I’m into it all, as long as it’s aggressive and people are eating shit. I don’t take photos or shoot video until someone gives me that feeling, and curbs give me that feeling big time.Do you have any deep philosophy about the art of curb skating or is it just fun to crunch those things?I think skating should scare you daily and be fun at the same time. Curbs give you both.As always, your pics are shot up close and from a low angle, but it’s hard to get lower than a curb! Are you fully laying down and getting dirty for your art or are you hunched over at the waist?I’m usually just throwing my camera into the danger zone. I couldn’t imagine putting my face to the view finder a half inch from someone’s wheel on a frontside slappy. That’s insane. A few test shots can usually tell you where you’re at and it’s all about finding the right angle to show the duality of aggression and style. Shooting long lens is a different story. Focus is key, so I’m all the way flat on the ground with my cheek on the concrete or in the ditch mud for those. Shit can get gross or you can ruin your lens or camera, but it always pays off. Just watch out for needles and human shit. 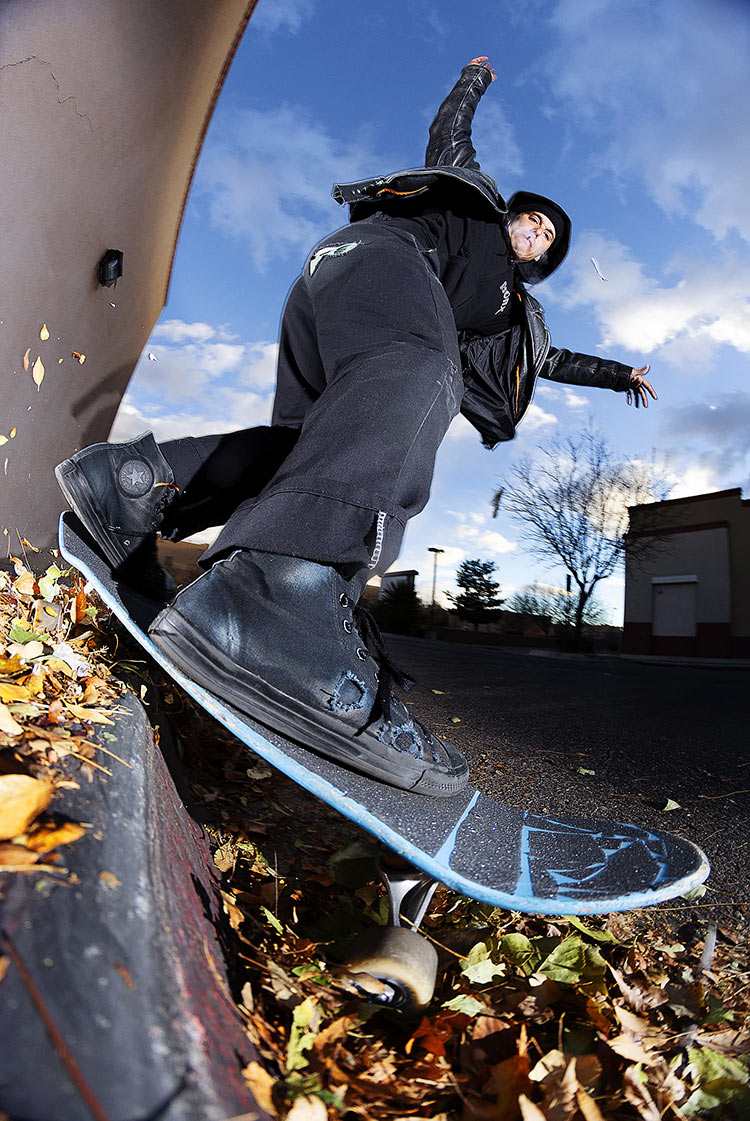 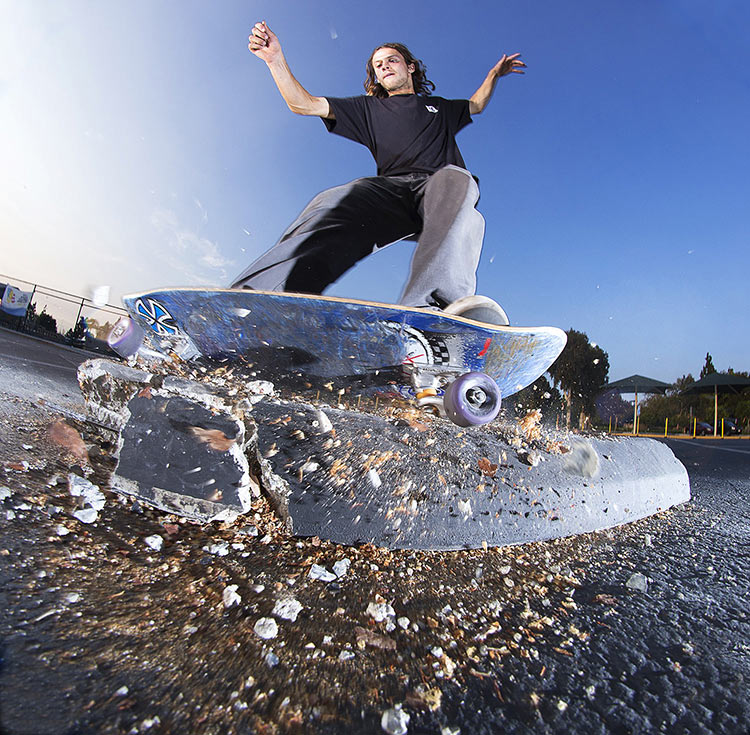 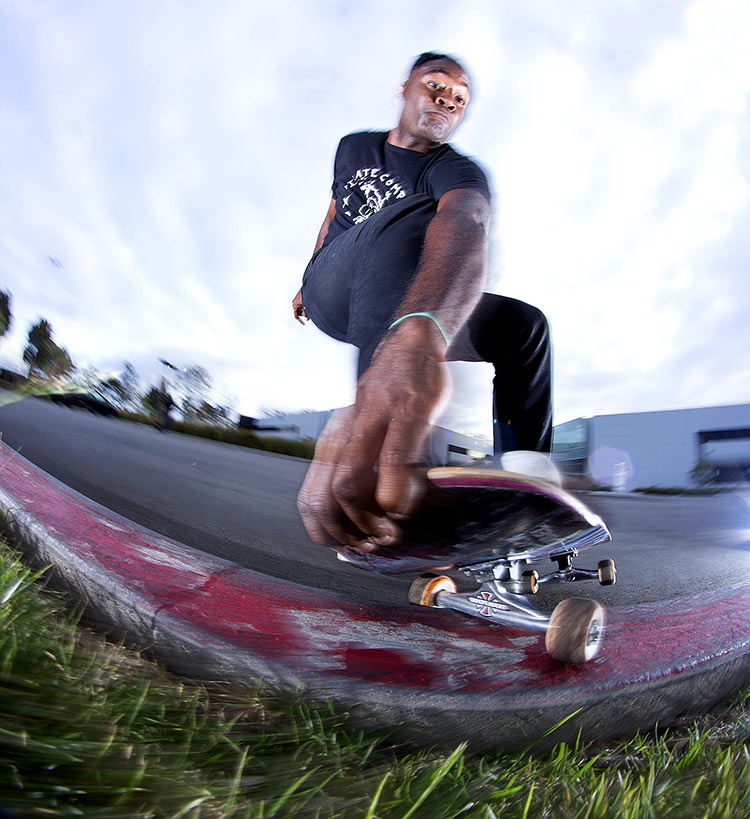 Up-and-coming skate photographers are often told, “Shoot with pro skaters if you can.” It’s usually regarded as a dismissive way of saying, “Don’t call us. We’ll call you.” You were told this and, sure enough, you came back with photos of Lance Mountain, John Lucero, Jason Adams and Sam Hitz. How did you wind up shooting with those guys?I did a curb contest at Cibola Skatepark in Albuquerque. Black Label ended up sending a box of prizes. I thought that was cool and have always been a Lucero fan, so I bought a Van Man deck and gave myself the goal of getting a picture on Black Label’s IG. That photo became a subscribe ad for Thrasher and I later found myself getting a box from Black Label with a note just saying, “Keep doing what you’re doing.” Months later I was visiting a friend in LA and got an invitation from John to drive down to Huntington Beach and meet. We went to skate the umbrella curbs and John casually mentioned, “I guess Lance is gonna come by.” We ended up having a blast. It was like skating with my hometown friends—non-stop laughter and jokes, some good slaps and some clips and photos. We listen to a lot of the same music, mostly power pop from late the ’70s and early ’80s. I feel at home skating with those guys. I even started a new band with Lance and recorded a few songs. I’ve gotten to skate with quite a few heroes through Lucero and have made some lifelong friends. Eternal thanks John!In your mind, who would you describe as the King of Curbs?Godfather: John LuceroKing: Jason AdamsPrince: Ace PelkaMost Aggressive: Sam HitzMost Funny: Lance MountainI see that Hitz caught some raw sparks. I’ve only seen sparks in the wild once or twice in my life. How often have you seen slappy sparks?It definitely happens. Dry curbs and Indys are a good combo. Very rare, but it happens. Hitz can do it on command. 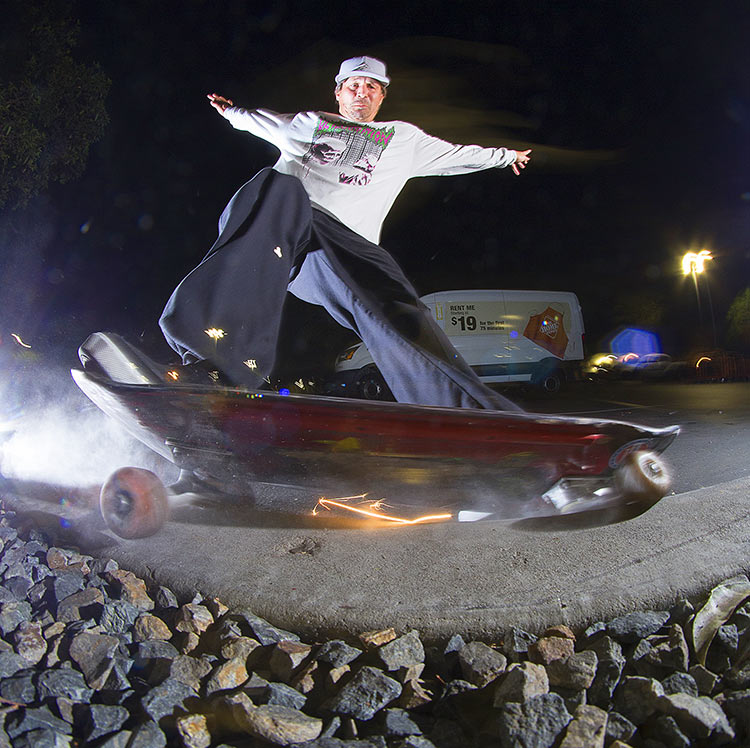 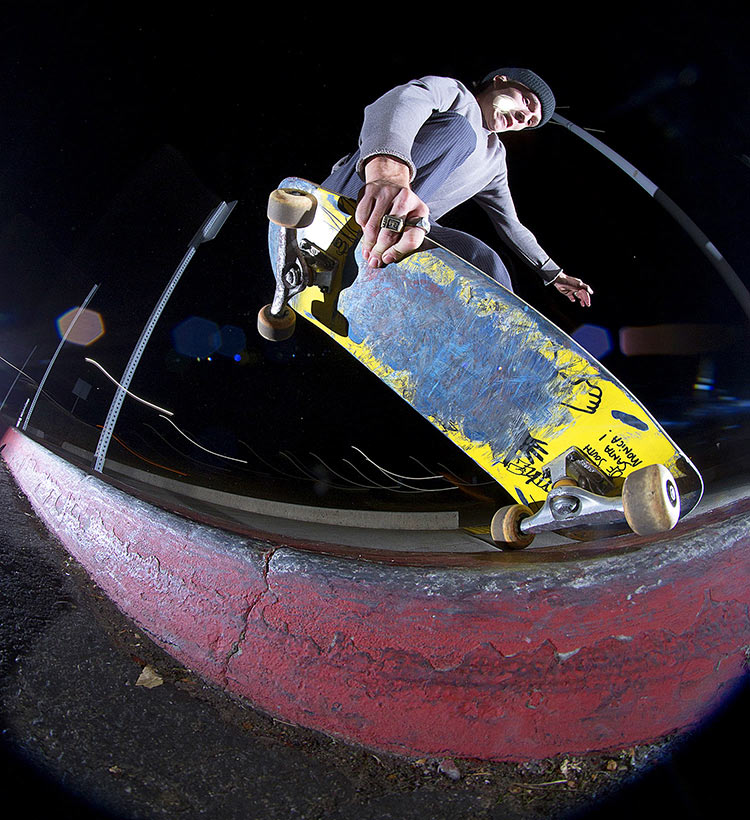 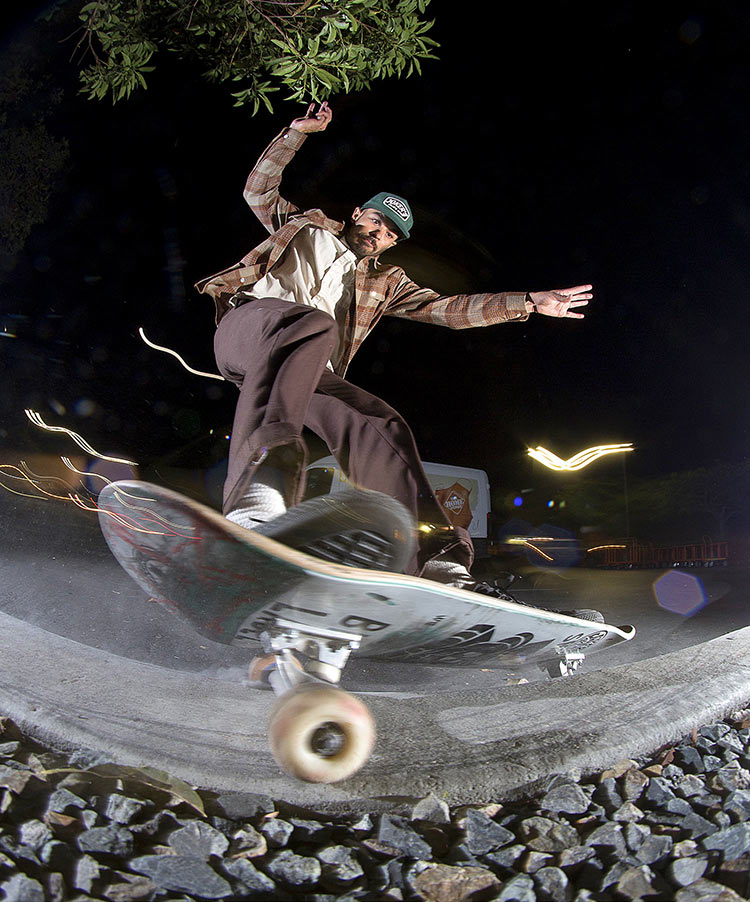 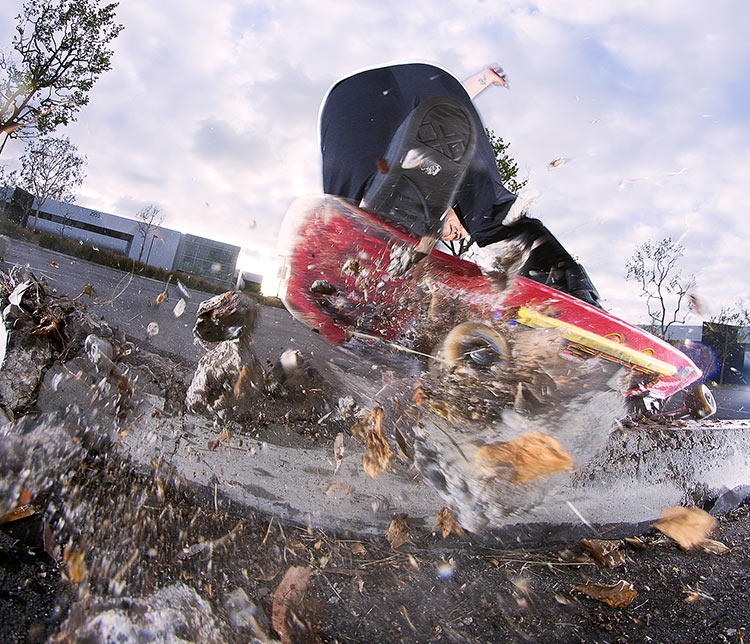 Every skater knows what a slappy is, but they’re actually tricky to describe. How would you define a slappy for Webster’s dictionary?To me, a slappy describes a certain approach to a slide or grind. Anything vertical that you can’t just ride right on to, you must smash up—no ollie, no lift. Frontside grinds are also done different than backside grinds, but both touch front and right truck on the way up. Roll-on grinds are a totally different thing where you roll straight onto the grind. Slappys go up, defying logic and moving upward by pure aggression alone.In the shots you’re in, was it self-timed or did someone take your pics?I usually pass the camera to friends after getting the lighting and exposure all set for them. I’ve only been shot by a real photographer a few times—once with Hammeke in an LA ditch and another time with Swift in an Oceanside ditch. My friend Fro in Albuquerque is a good photographer and has been down to come on some missions with me. I’m also picky and usually know what I want, so it’s cool to have folks into working with you on your ideas. But mostly it’s just whoever is near me and down to go through it.You shoot photos of all types of skate terrain. The only thing left is flatground photography. Do you think you could take compelling pics of sheer flatground skating? No fire hydrants!Tell Rodney Mullen to give me a call! Maybe Hammeke still has the street sad plants? Street plants are sick. I’m down. 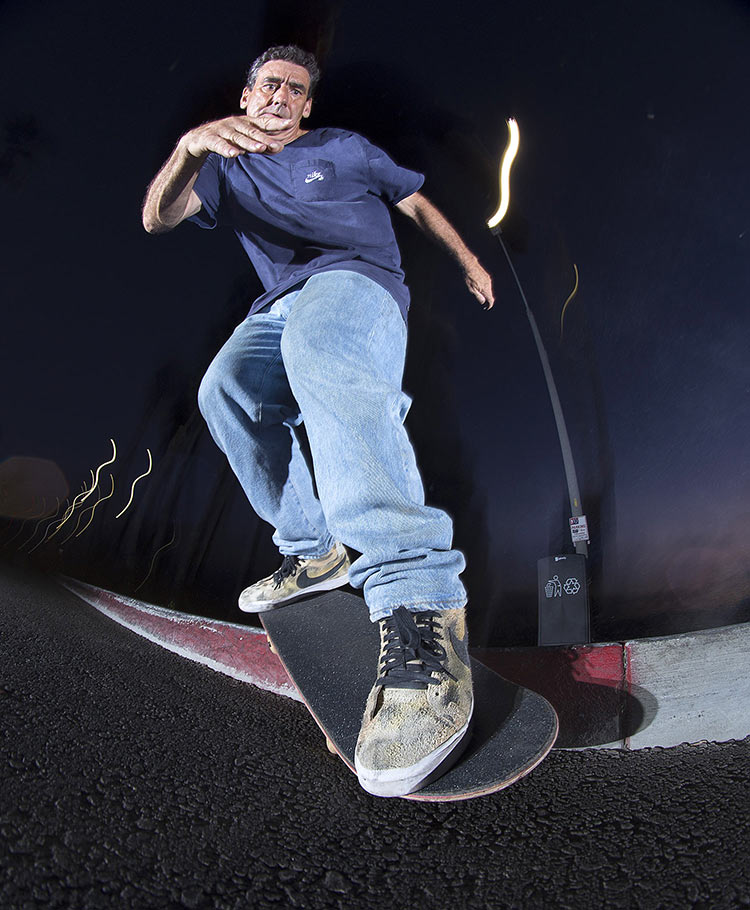 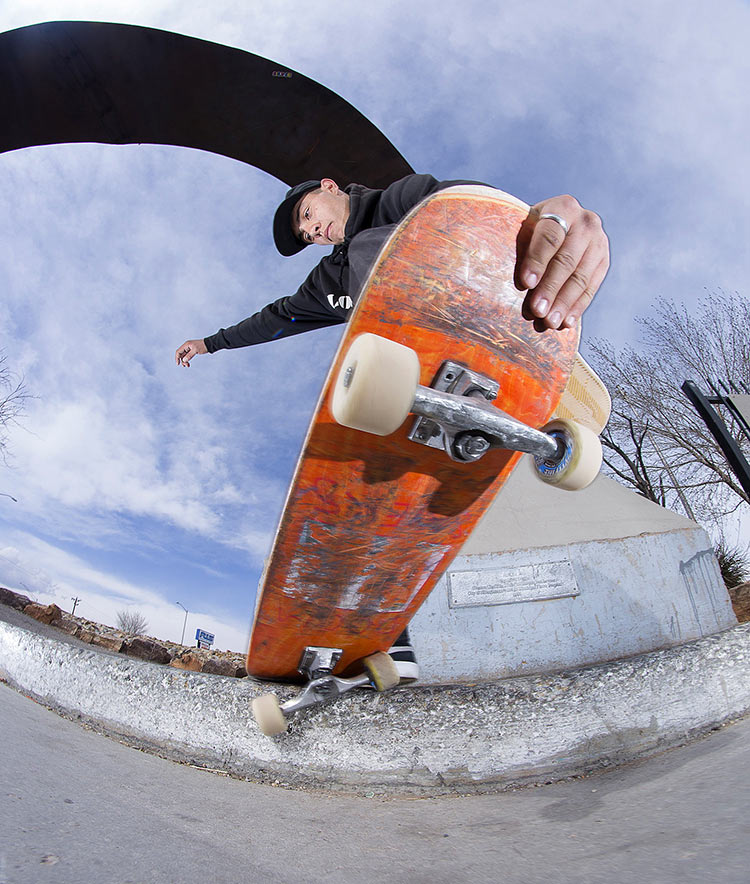 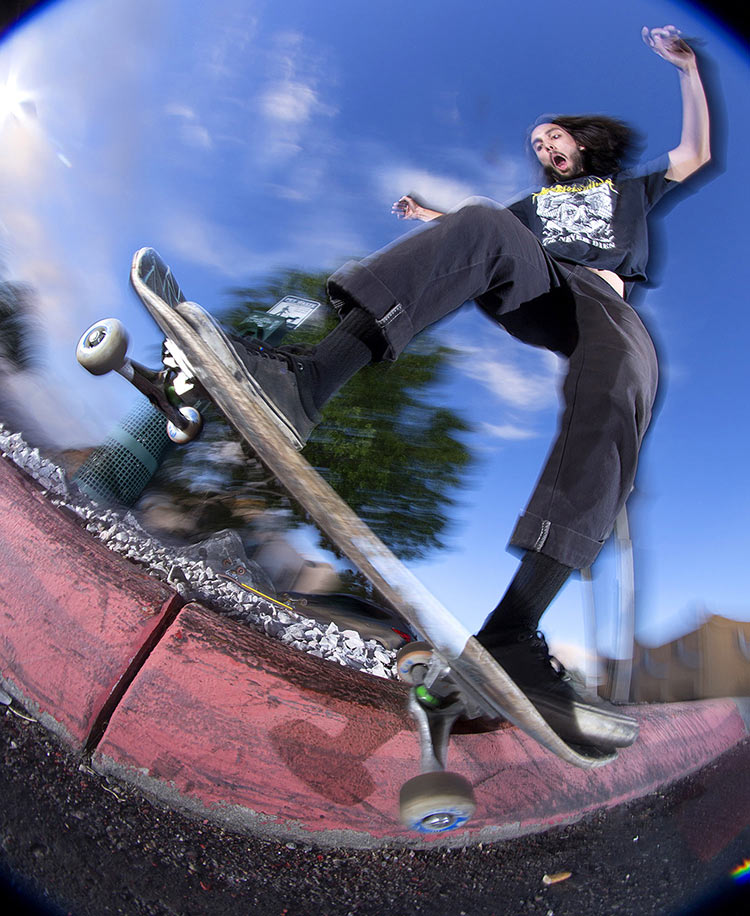 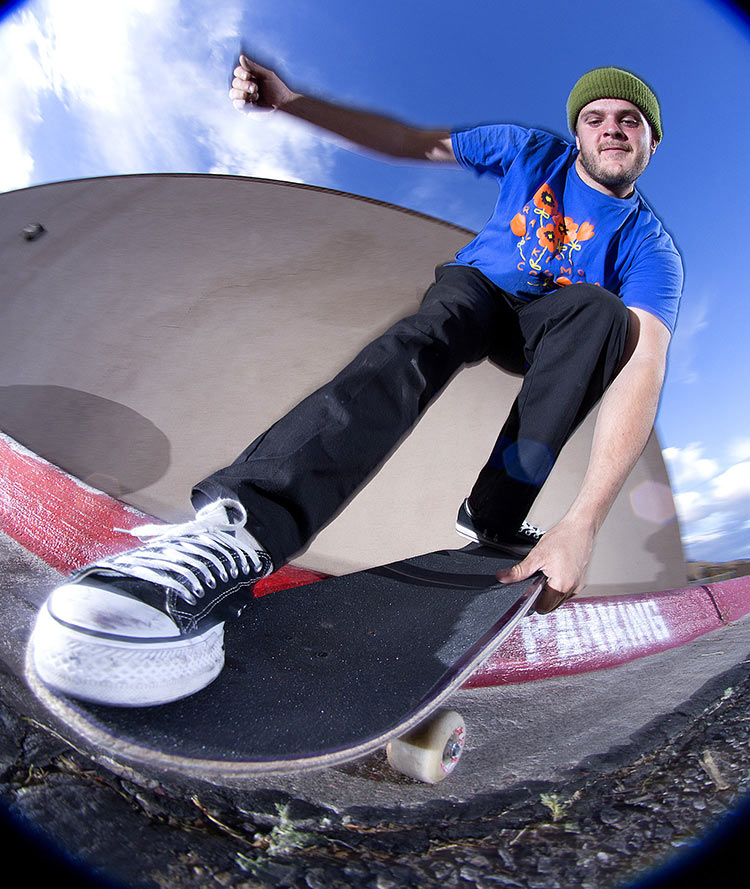 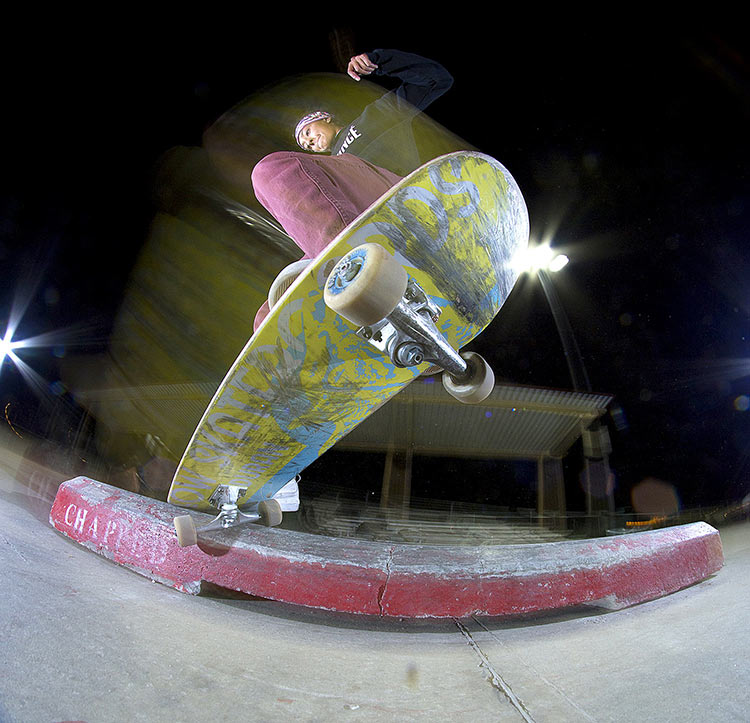 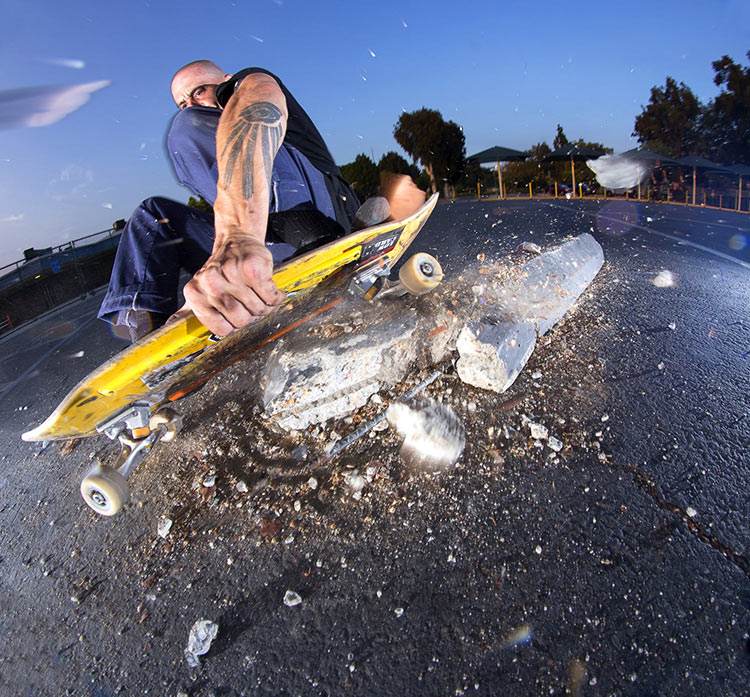 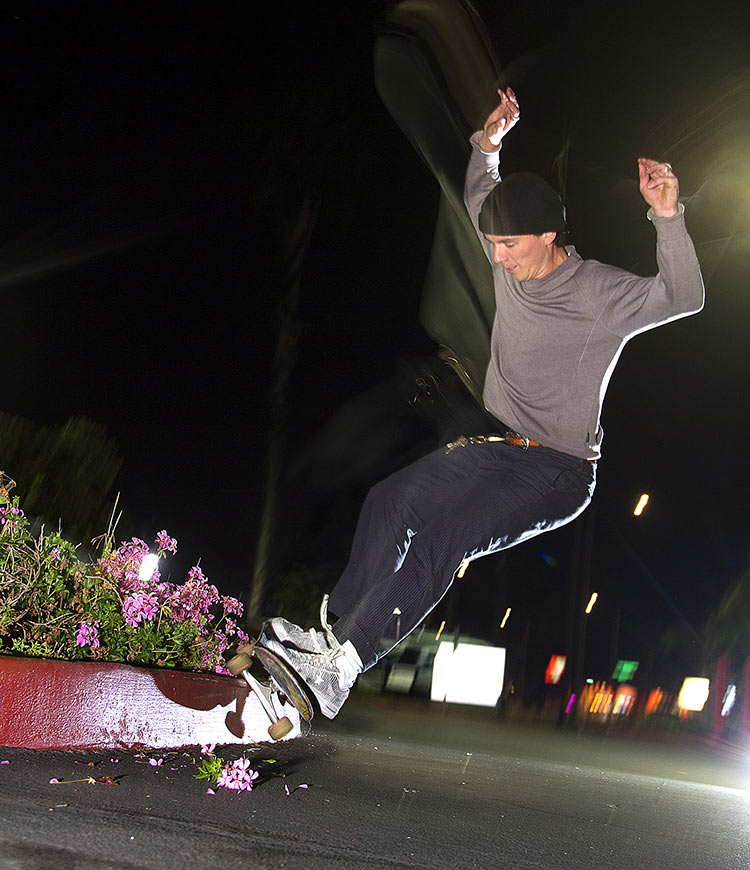 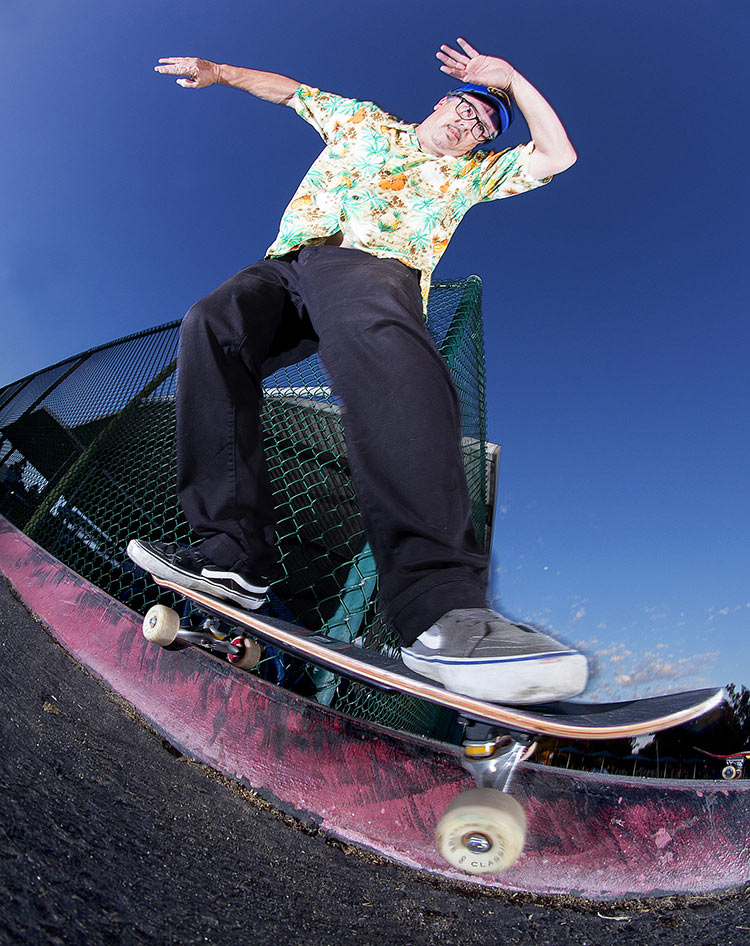 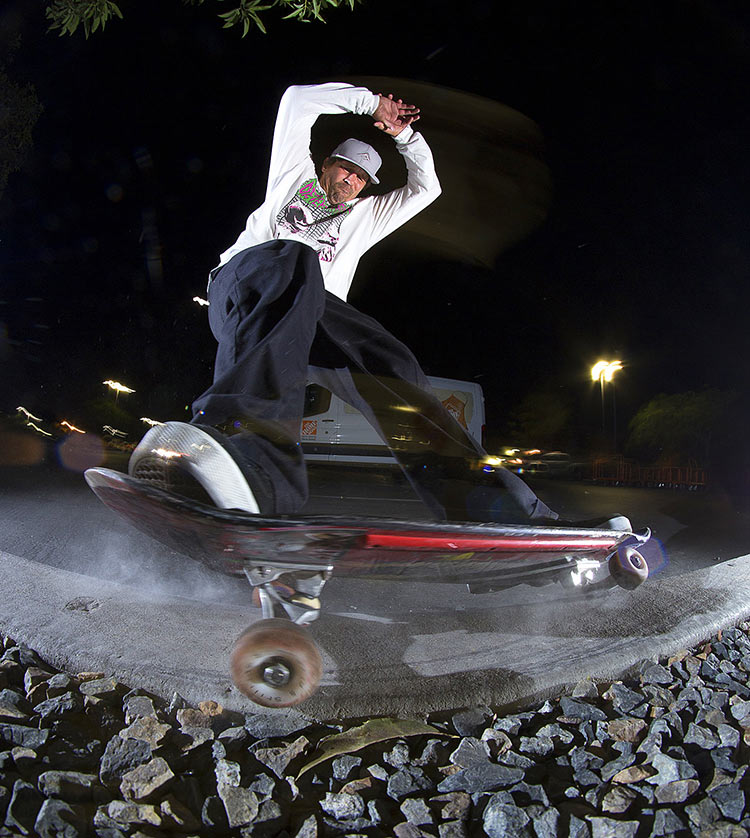 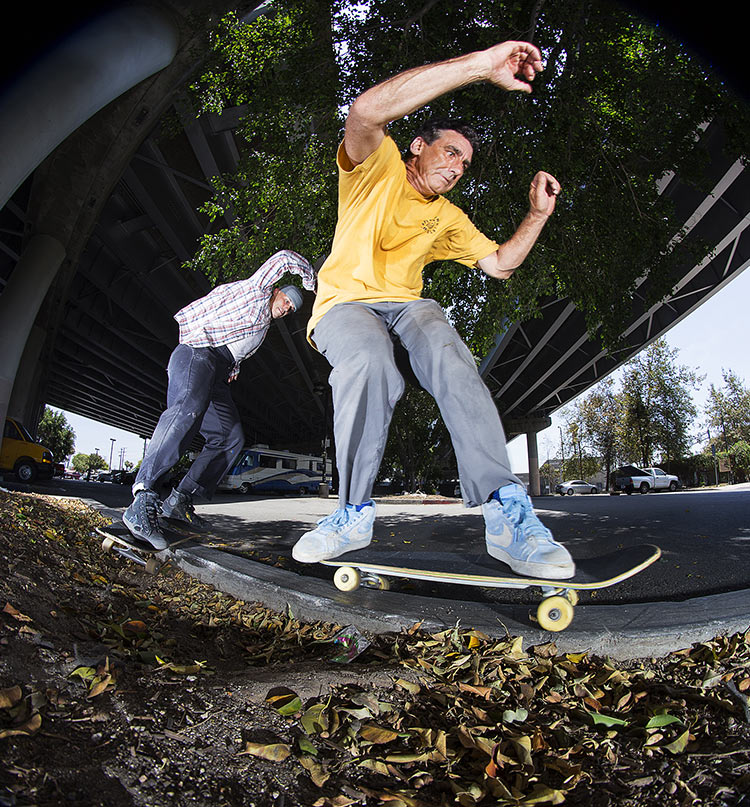 Ryan Maddox and Lance Mountain  /  Photo: Angelo
You’re still the King of Photograffiti in the mag and we appreciate all the great pics you send. What else have you been up to lately?I’m working in the transportation department on two TV shows for NBC in Albuquerque. More importantly, I’m finishing the newest full length in the Chapped series, Crackrock. (Trailer here.) It’s getting ready for an August 2019 premiere. I almost died making this film, so I am ready to be done with it and have it out. I’m working with Fos on art and DVD layouts, so I’m excited to get all three Chapped videos onto one DVD and make the trilogy available. I’ll be traveling to Chattanooga, TN, to play the DYHW punk fest with my old band Hidden Spots. We recently released a full length 12” called New Me, New You on DeadBroke Records, with vinyl and digital downloads available online. Lance Mountain recently mentioned something about an album and tour soon with our band, so I’m excited for a lot of things right now. Life is crazy and I’m really glad to be here.Sounds good. Take care, man.