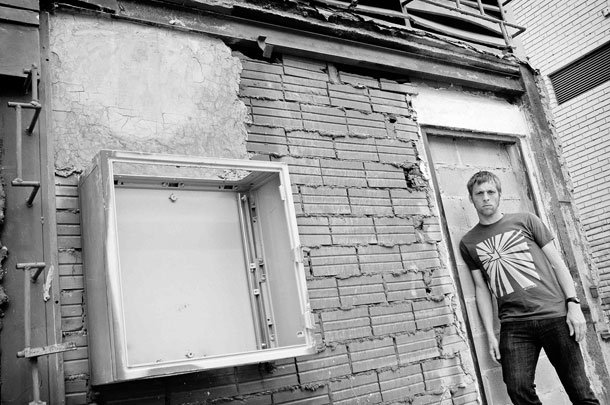 "I'm not into killing them, but I love butchering them."

I've known Diego for a long time. When he first started living in the US, my house was one of the spots he stayed at. He and I became a two-man team, travelling, filming, and enjoying the life while trying not to "break our heads." We worked on a few video projects together and he really helped me learn to see things differently and get creative. His passion for skateboarding is something you rarely see. He seems to always have a plan, and he knows the steps to get there. I haven't seen him in a few years since he moved to Spain, but for sure the term amigo will always remain. Here's an exclusive web interview to catch you up with The Butcher.

Damn Diego, what's it been, like five years-plus since we've hung out?
Yeah, it’s been a while. Last time I saw you was at the RVCA mini ramp contest for a hot second. Before then was at the Wallenberg contest—the first one—about five years ago.

So are you still the vegetarian butcher, or are you eating meat now?
Fuck no, it's been so long since I stated eating meat again. I'm actually into trying all kind of different meats. Argentinean asado; that's still my favorite one. I even slaughtered three lambs and a pig. They taste so much better if you do it yourself. I'm not into killing them, but I love butchering them.

When did you put together a website, and how long have you been taking photos?
It was about a year and a half ago. I had all these photos that I wanted to share with everyone, and since I was shooting a bunch of skate photos as well, I thought it was gonna be a good idea. I've been shooting photos for over 14 years, since I was 18. 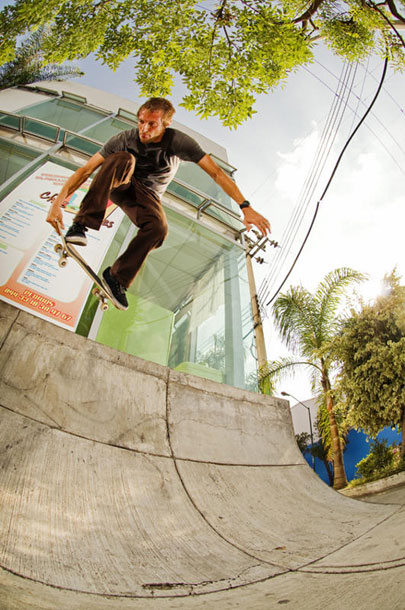 Backside air, Guadalajara, Mexico. I learned backside airs after 20-something years of skating, and I've been doing them everywhere I go. Baby quarterpipe, baby backside air.

How's the married life?
Married life… It’s got up and downs, like anything else, but overall it's great. It's a bit harder for traveling, but we make it work.

How are your legs?
My knee is finally getting good. It's been over a year since the surgery, and even though the recovery is really slow, it feels great to be able to jump around again.

What's your favorite memory of Jake Phelps?
There are way too many to choose one, but driving around SF with him and Mic-E while they were showing me the most gnarly and hard-to-skate spots was a great one. He would lie to me, trying to convince me to do shit at spots that people got killed at. I'm sure he still does it with all the new kids. 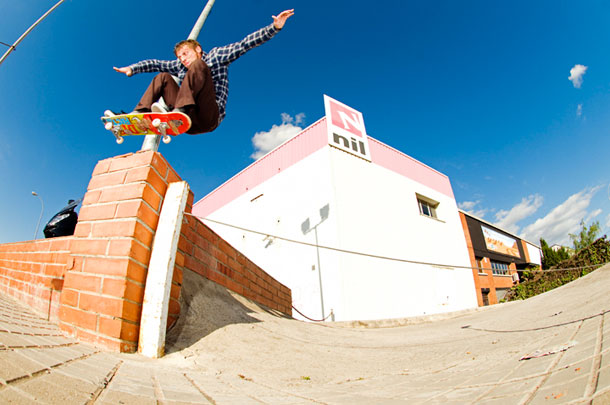 Wallie. Barcelona, Spain. I found this spot on my way to another. Really crappy, but fun.

What spot that you’d seen in the mags impressed you the most when you finally saw it in person?
Almost all of them. You’re always expecting something different. There are only a few spots where the photo or footage does it justice. A lot of the things that Geoff and Arto skated are like that.

That double set that you ended your part with in Scorching Summer. Did anyone else try it before you? Was that one of the biggest jumps you've taken on a skateboard?
I think Jamie and Reynolds tried it before, but they couldn't roll away. That was probably the biggest ollie that I have done as far as a drop. I would rather go farther than higher. It was one of those things that I wanted to do for a while and Phelper told me that Kasper was gonna do it, so I thought it was the right time to go for it.

Other than landing the ollie, what do you remember most about it?
It was the craziest day. After I told Jake that I was gonna do it, we met up at the school and he showed up with Luke, the Gonz, and some random dude with a dog. Luckily I made it second try and Gonz was there to see it.

What's new with the Toy Machine besides Leo Romero? Are you working on another video, or do you have some big tours coming up?
We’re finishing a new promo video—it should be out in the beginning of November, and after that we’ll start filming for a full length.

Who has better musical tastes, Josh or Austin?
I'm not sure. Probably about the same. 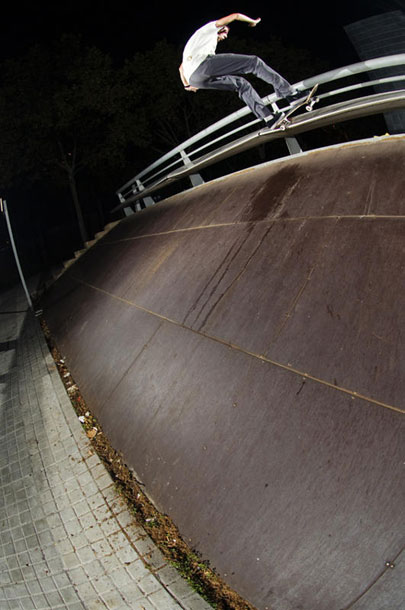 Frontside 5-0, Barcelona, Spain. The police station is right across the street from this spot, so after shooting the photo as quickly as possible, I packed all my shit and left. I realized I left my board at the spot once I got home. Great.
What do you miss most about living in SF?
Skating around, hanging out at Thrasher, and good Mexican food.

What do you miss most about LA?
Nothing. Long Beach is so much better.

What's the best part of living where you do?
Right now, I'm living with my parents-in-law for just the summer. After that, my wife and I are going to Long Beach for a few months, and then to Argentina for the summer there—so we’re gonna be moving around for a bit. Not sure where we’ll end up, but traveling is always fun.

What's the sketchiest situation you've found yourself in?
One year, my friends and I were drinking some beers at our local spot for Christmas, and a bunch of idiots starting shooting fireworks at us. So we threw beer bottles back at them. They got pissed and charged us. One dude had a broken bottle and tried to cut my throat with it. After dodging him I ran, but the guy chased me for about 10 blocks. Luckily I escaped. 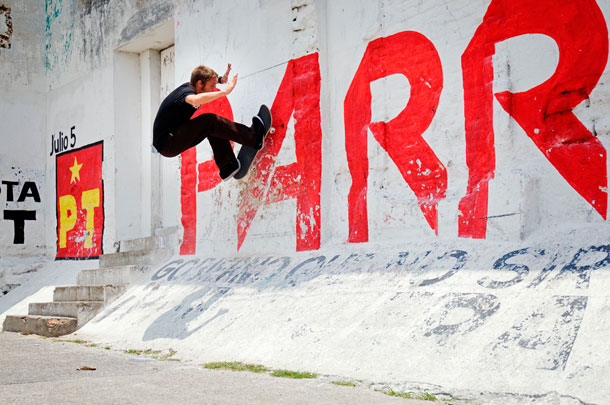 What does "Breaking Your Head" mean?
My friend Luchi came to the US to visit me, so we went on a road trip to AZ and Colorado. After seeing the Grand Canyon, he said, "This is breaking my head," meaning “it's blowing my mind.” He literately translated it from Spanish to English.

How often do you visit the Argie homies?
About once a year. This year I'm gonna spend a few months there, so it’ll be fun to hang out with them for more than a week.

What is Buenos Muchachos?
It’s an Argentinean skate mag. It means "Good Fellas." 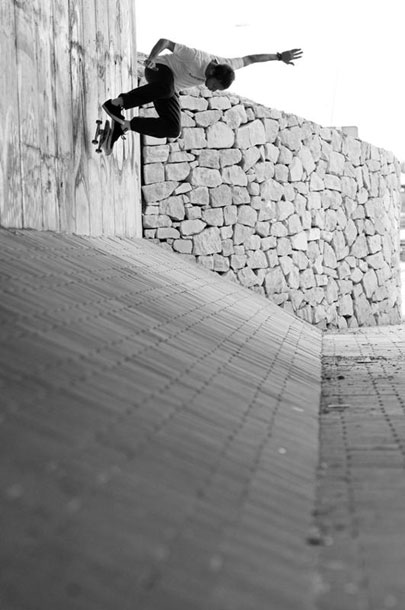 Kickflip wallride, Alicante, Spain. Spending my summer in Elche, I skated with Roberto Aleman a bunch. We found lots of spots and this was one of them.

Imagine that you transformed into being the traveler, Kenny Reed. What un-traveled-to spot would you visit first?
Siracussa, Sicily, where my father's family is from.

Who do you think should be SOTY this year?
Leo Romero.

Ollie, Barcelona, Spain. This is the famous spot where everyone skates the banks. I always try to look at spots in a different way, and I came up with this ollie from one pyramid to the other.

Why weren't you at the Skatepark Roundup with the Toy Machine team?
Unfortunately, I've been stuck in Spain for the last 4 months waiting for my work visa to come through. It finally got approved, but way too late for the skatepark session with the boys.

What does the future hold for The Butcher?
Shoot more photos, and keep skating until my legs fall off.

Most importantly, when can I see you again? It's been way too long.
Thanks bro. Soon, very soon.