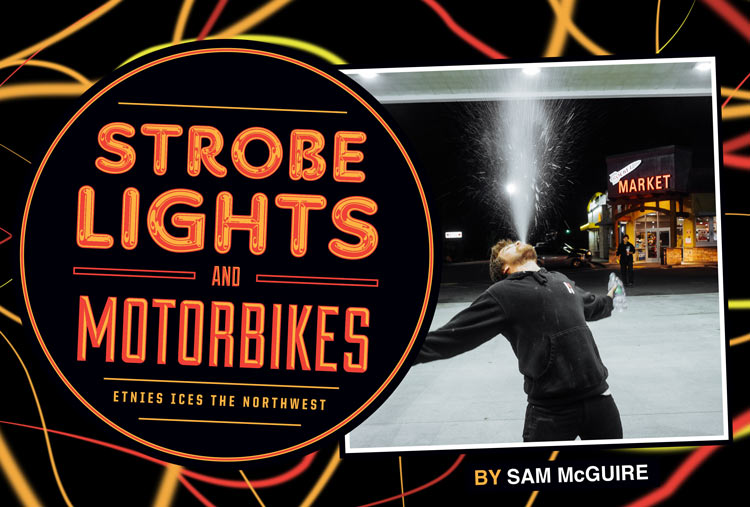 We were about an hour outside of Seattle when the van was magically transformed into a rolling EDM nightclub. We were in a big Dodge Sprinter—one of the vans you can stand fully upright in—and towards the front, two people were doing handstands. The rest of us were in the back, crowded around an oversized portable speaker while a strobe light did its best to induce a seizure. The van was full of smoke and somebody dove off the backseat and crowd surfed to the front. We barrelled into a gas station. David Reyes grabbed his board, flung the sliding door open and flew out of the vehicle before it screeched to a stop. He sped off into the parking lot and landed the most perfect impromptu high-speed 360 flip I’d ever seen. Everyone in the van went nuts. At that very moment, we knew that the first trick had been filmed for Etnies’ upcoming full-length video. You heard it here first. 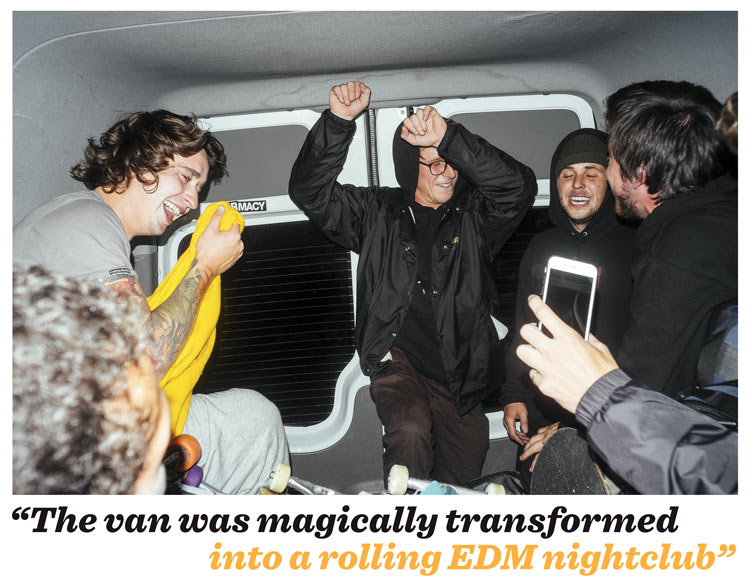 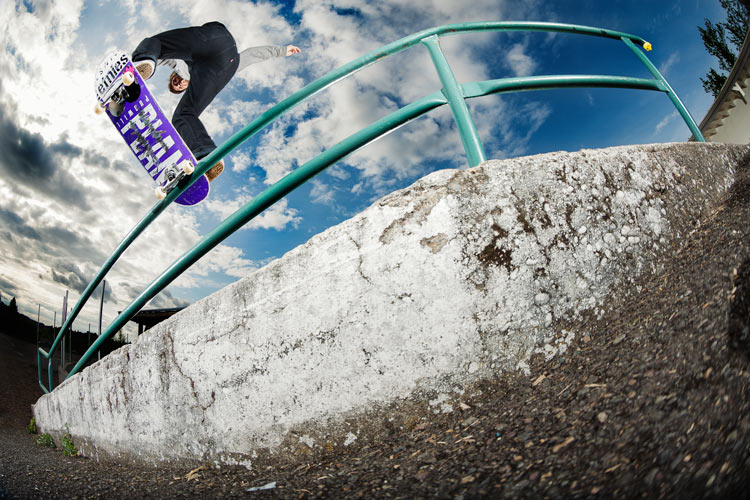 Recreational marijuana use is now legal in Oregon. David Reyes celebrated by sparking a fatty blunt transfer in Eugene

It’s been 20 years since Etnies’ last video, High 5, became a coveted VHS-library addition, and with the company’s 30-year anniversary on the horizon, the time was right to return to the long-play format. So a healthy chunk of the team hit the highway to the Pacific Northwest, on up into western Canada, to see if we could get this bad boy going. It’s a long road to the end of any video journey but if this maiden voyage was any indication of things to come, this production is gonna be smooth sailing—all seizures withstanding. 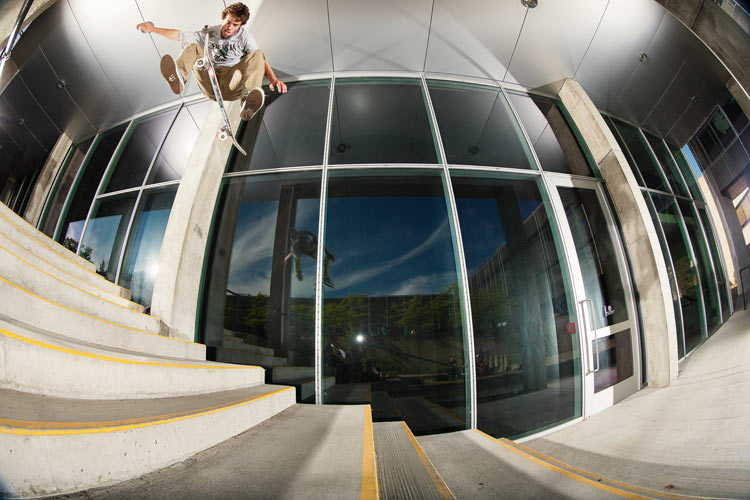 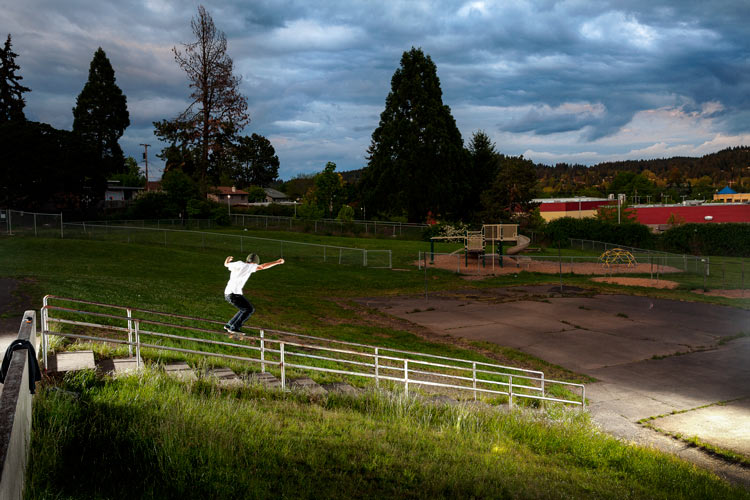 NO BRAKES? NO PROBLEM!
Nick Garcia had a spot in Seattle that he wanted to hit but realized when we got there that he was gonna need a motorcycle to pull him if he was gonna get to the top. We were standing around staring at it when we heard a brap, brap, brap sound behind us. And up rolled Brandon—an epic human with a bitchin’ mini motorbike. Unfortunately, his little cycle wasn’t powerful enough to pull somebody from a dead stop, so Brandon would gas it, Nick would push to catch up, grab hold of the bike and then whip himself up the bank. It was so sketchy. To top it off, the motorbike didn’t have any brakes! Half the time Brandon would crash into the stairs after Nick let go. Luckily, no people (or machines) were injured during the process and Nick rolled away from a banger of a frontside air. And Brandon, well, he just rolled away. 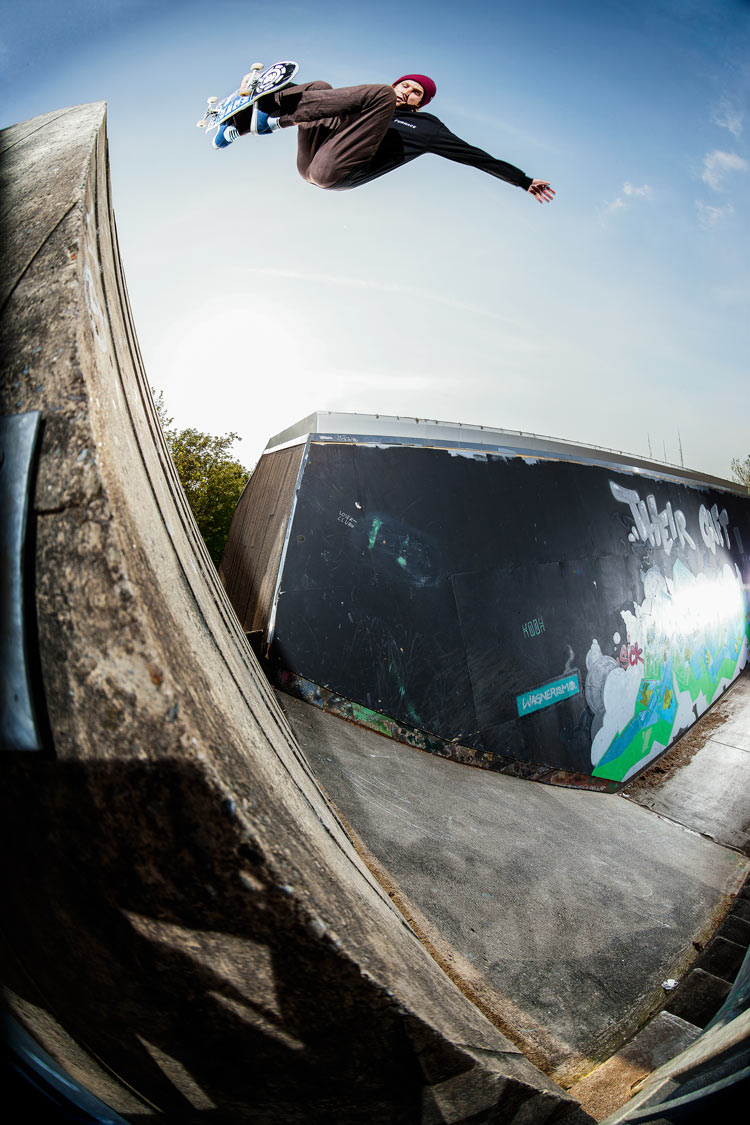 We were guessing pivot or nosepick but Nick blew it out (and our minds) with an FSA. Braaaap, Braaaap

THAT BOY GOOD
I get asked a lot what it’s like to shoot with Chris Joslin. “Is he really as good as they say?” people ask. And to be honest, before this trip I didn’t really know. I had only been around him a handful of times, so I hadn’t witnessed too much of his madness firsthand. That all changed in Vancouver. We got to a hefty double set and I got my gear together as fast as I could ‘cause Chris was ready to jump. He warmed up with an ollie and then I thought he was going to try a 360 flip, but as he was rolling up one of the dudes said he was going for a nollie flip. And—boom—first try, stomped it perfectly. I sat there in disbelief. It wasn’t until I looked at the photo later in the hotel room that the gnarliness fully hit me. So now if I’m asked, “Is Chris Joslin really that good?” I can say without a doubt, yes. That boy good. 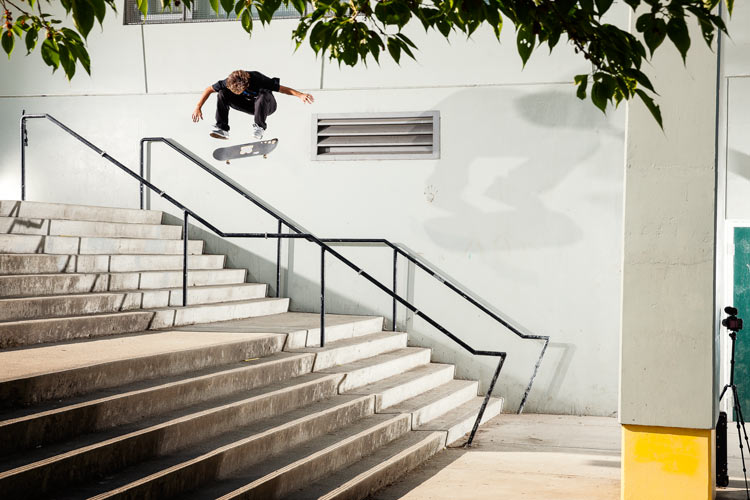 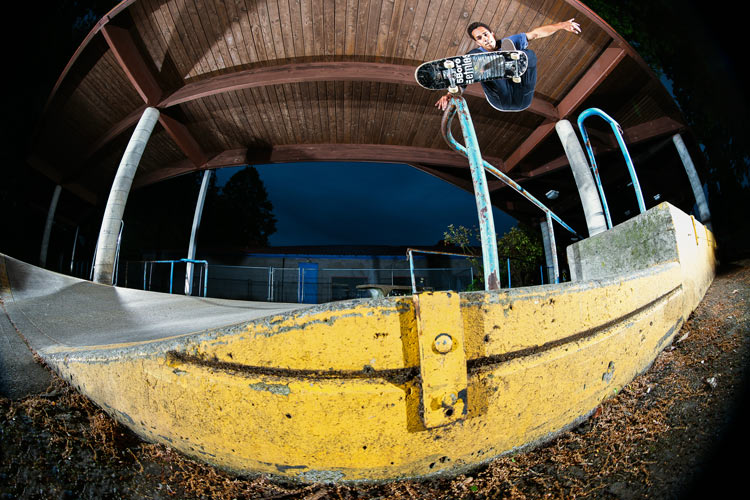 Silvester Eduardo found a new line at an old Portland haunt. Double-duty rail ollie ‘cause that’s just how Doogie do 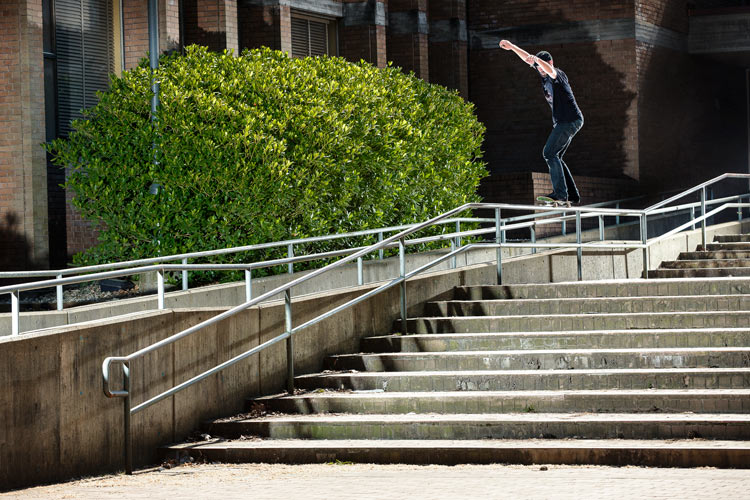 Who knew mild-mannered Matt Berger had a kinky side? Long-haul 50-50 in Vancouver, BC

THE COLD RUSH
Ten days before this trip went down I had knee surgery. I was actually zonked out on pain pills when I got the call and probably shouldn’t have even agreed to go. When I left the hospital, they gave me this little contraption called an Ossur Cold Rush machine and it’s literally the best thing you could bring with you on a road trip. It’s basically a little cooler that you fill with ice and it pumps ice-cold water into a Velcro pad that you can strap to any part of your body that’s sore. Silvester Eduardo and David Reyes both got hurt and kept asking to borrow it, which was mildly annoying. But then one of the dudes figured out that you could use it to cool down beer—extra fast—and I spent the rest of the trip trying to track down my medical device. If I owned a skate company, I’d probably buy a dozen of these things to take on every trip. Actually, maybe skaters don’t necessarily need something that makes drinking cold beer even more convenient. Scratch that off the list. 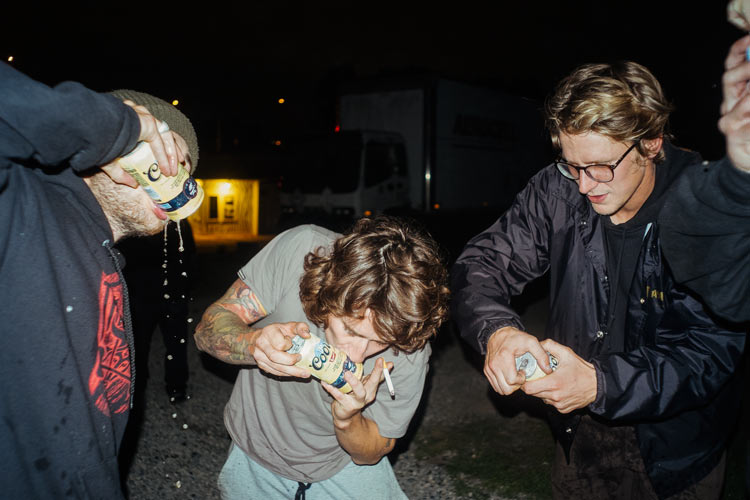 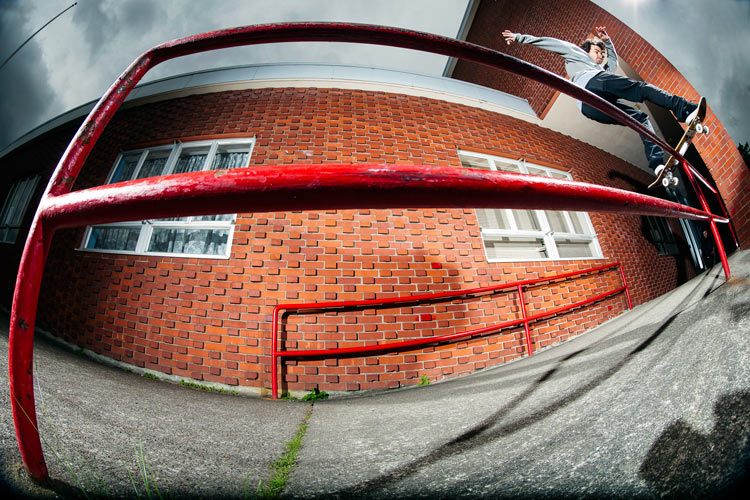 Quite often, the quietest dudes bring the heaviest moves. Trevor McClung, silent in the van, screaming on the streets: screeching switch front board 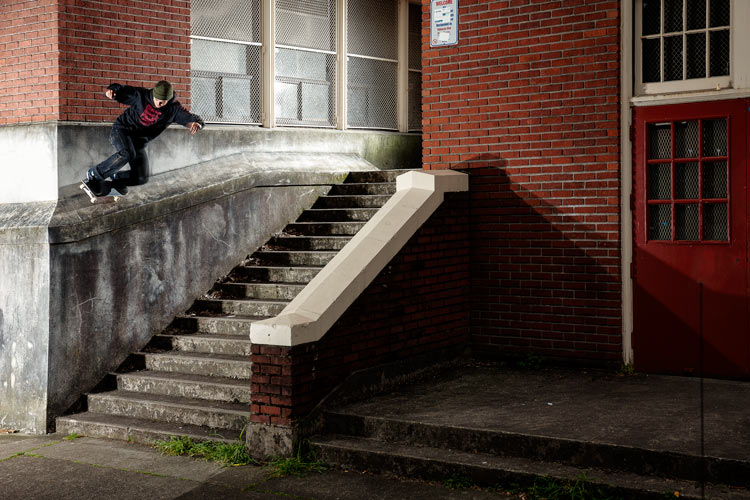 We stopped to grab some beers in Portland and Aidan spotted this crusty gap to wall crawl. He managed to ice it down without my Cold Rush. Take note, dudes!

At the start of this trip, the only clip we had for the video was a flatground 360 flip, but by the end we were already sitting on a healthy chunk of footage. And I know it’s super early to make such predictions, but based on how high the stoke level is with all the dudes involved, I’d say this Etnies video is going to be another coveted title in every skater’s library. The road to completion might still be long, but as long as we’ve got a van full of smoke and strobe lights and some medically cooled brews, I’d say the journey is gonna be nothing but good times and high fives. See you at the premier. I’ll be the dude trying to find my Cold Rush.