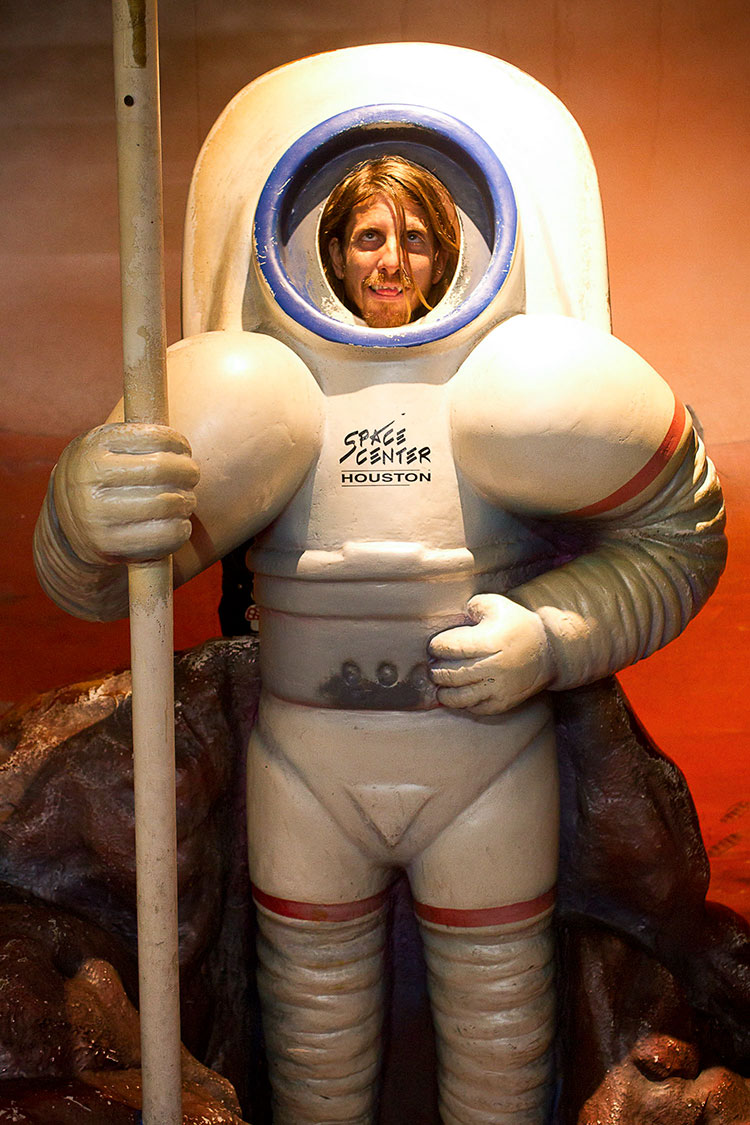 How did this part come about?
I’ve always liked the band STRFKR and thought it would be cool to try to do something with them. I reached out to see about doing a board with them and they were down, then realized I was sitting on a little bit of footage and thought it would be cool to do a part to go along with it. So now I get to skate to one of their songs to tie it all together.

How would you describe STRFKR’s music to a first-time listener?
Good-mood music.

Are you bros with these guys or was it just a cold call?
I have a buddy Shawn that actually used to live with some of the guys in Portland a long time ago and he is the one that put us in contact. The bass player, whose name is also Shawn, happens to skate so he is the one that I guess I am closest to. They got me passes to go see them last time they came to Phoenix. 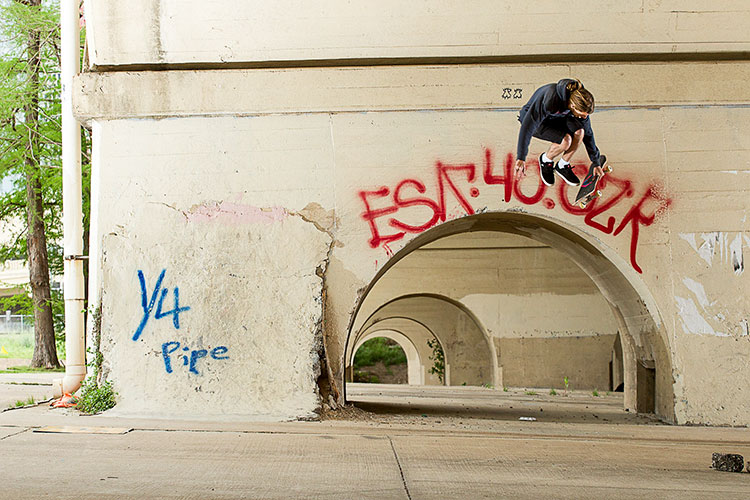 Does the band use any mouth harp?
I haven’t heard any yet but I definitely showed them my stuff and they were psyched.

How did you get into playing that?
I looked up techno beat boxing on YouTube and found someone playing one and thought it sounded really cool and decided to get one myself.

How long have you been playing them now?
Maybe four or five years?

Did the slam on KOTR change your sound or style of play at all?
It definitely fucked me up for a little bit. I couldn’t play at all for a good eight weeks. It still sounds the same but I think I use my top teeth more now and take it easier on the bottom row. To go back to the first question, that was another reason I wanted to put out the part since I haven’t really had anything come out since that slam on King Of The Road, so this has pretty much been what I have been up to since then. 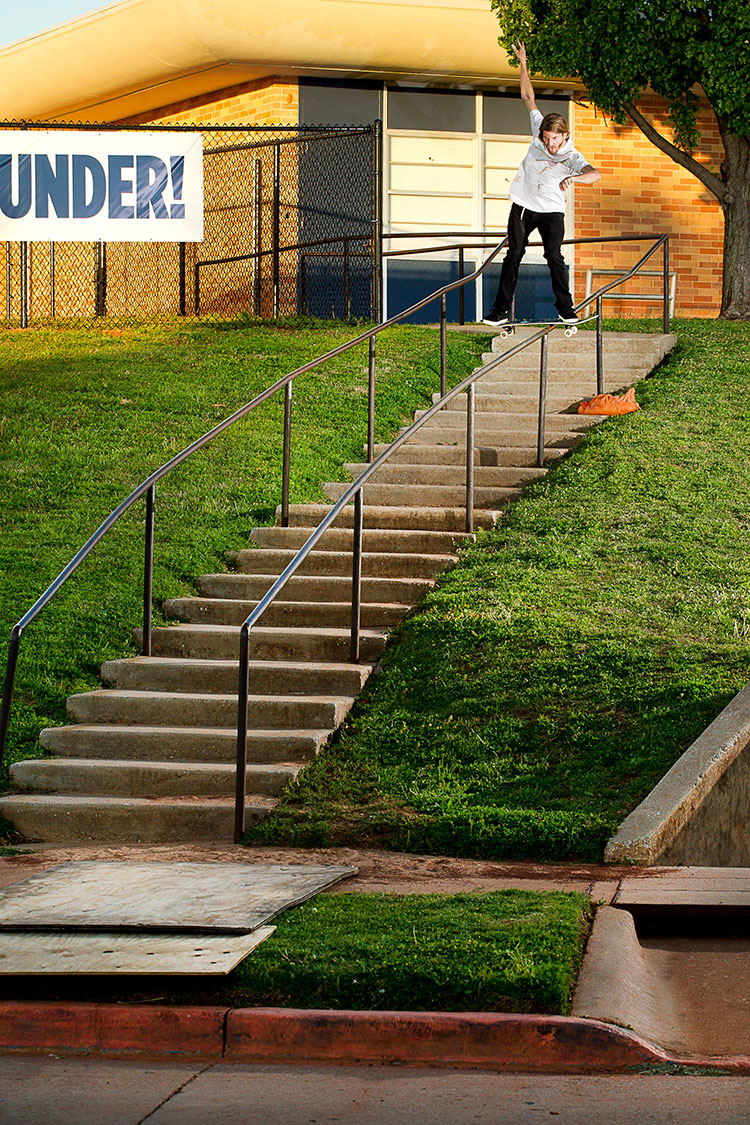 Going the distance on a lengthy boardslide in OKC. I thought Dakota was the rail guy!

I wanted to mention how all the photos we got for this interview have been from a 72-day Toy Machine trip that you have managed to drift your way onto. How did that work out?
The ol’ drifter. It came about because a few months back Leo and Dakota took the Yeto van on a Brostyle trip to Texas and Arkansas and picked me up on the way with Ryan Townley and Michael Cukr. We had so much fun on that trip that when I heard Leo and Dakota talking about doing an even longer one I begged them to let me go on it. Dakota is my best friend and Leo was cool with it so I got to drift on in.

So leaving your house for 72 days, how many pairs of socks did you pack?
Dude! Ha! I brought two pairs. I was planning to just buy more once we were gone, but yeah, I left the house with two. 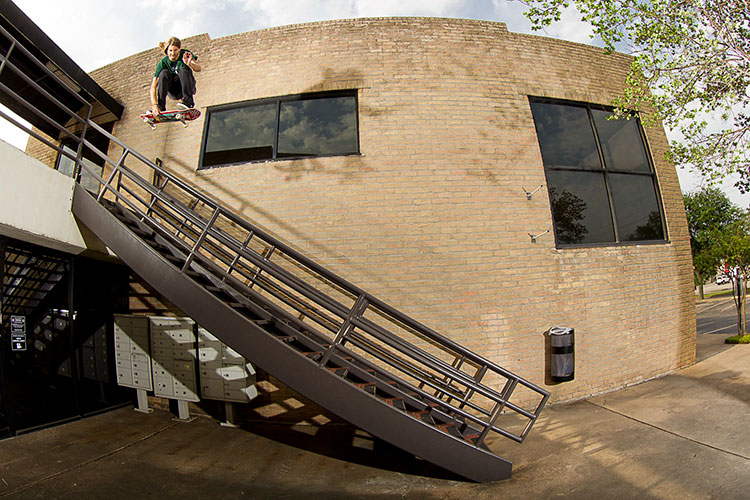 If you think this street grab is gnarly, wait ’til you see his socks

Can we talk about your mushroom sponsorship?
Of course! Four Sigmatic is seriously one of my favorite sponsors.

How did you wind up with a mushroom sponsor?
I met the dude Taro at X Games where he had a little booth. Ge had a Reishi and a Chaga mushroom up there and I was, like, “I know what those are!” and we started talking since then.

This is more than just a post-a-photo-of-a-package-on-your-Instagram-story-and-get-free-stuff sort of thing, right? Didn’t these guys just take you on a trip to Europe?
Well, I have been with them for the past seven or eight years but he just recently really blew up and got in Whole Foods and everything so he took 12 of us that have been supporters of him for a while all on a trip to Lapland, Sweden to go foraging for mushrooms in -40 degrees and to check out the Northern Lights. It was an amazing trip.

How important do you see Instagram as part of your skate career these days?
I don’t know. I back it but it definitely lacks the longevity. Like if you post a trick you are stoked on, there is no way it is going to stand the test of time. The good thing about it, though, is you get to engage directly with people. So there is this whole other level of connection.

Why do you think it is so hard to get a shoe sponsorship now?
Everyone is insanely good at skateboarding now so I think a lot of it comes down to your personality and I guess how good you are at your social media. I wish I knew what else to tell you. I’m still trying to figure it out myself. 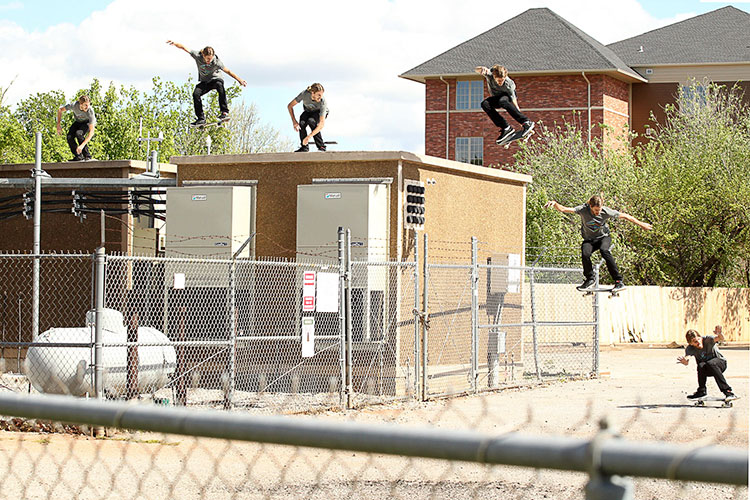 So what’s the most common reaction when somebody sees you on their roof?
First thing is, “Get the fuck down from there.” Second is normally, “How’d you get up there?” and lastly is, “I’m calling the police!” Ha! People really don’t like it when you get up on their roofs.

Have you had any notably crazy interactions?
I was recently in Hawaii and was skating off a roof that we had gotten kicked out of the day before and as I’m up there I see the same lady security guard that kicked us out previously and she is screaming at me from the bottom, “Get down from there! Get down now!” So I say, “Alright, I’m coming down right now.” And wound up landing the trick that try. Then this truck pulls into the parking lot all fast, honking their horn, and I think that they are all stoked ‘cause they saw the trick but this giant Hawaiian guy jumps out and walks straight up to me and grabs me by the shirt collar and starts yelling, “What did you do to her? What did you do to the security guard?” This guy was so big, though, he looked just like Tito from Rocket Power. So I knew fighting back or even trying to escape wasn’t an option. I was with the Weedmaps team and Jon Holland was filming it all so he still has the camera rolling and the dude’s wife now jumps out of the car and says, “You want to film something? Film this!” and started charging towards him, so things escalated pretty quickly. Lucky for us another local came out of the building and stepped in and told them we were professional skaters and that I definitely didn’t do anything to the lady. The guy kind of looked around and then let go of my shirt and as soon as the guy let go we all just started running to the van and bailed.

Was that the same trip when you tried the frog secretions you were telling me about?
That was the same trip. It’s called kambo. But yeah, that was actually the same day. 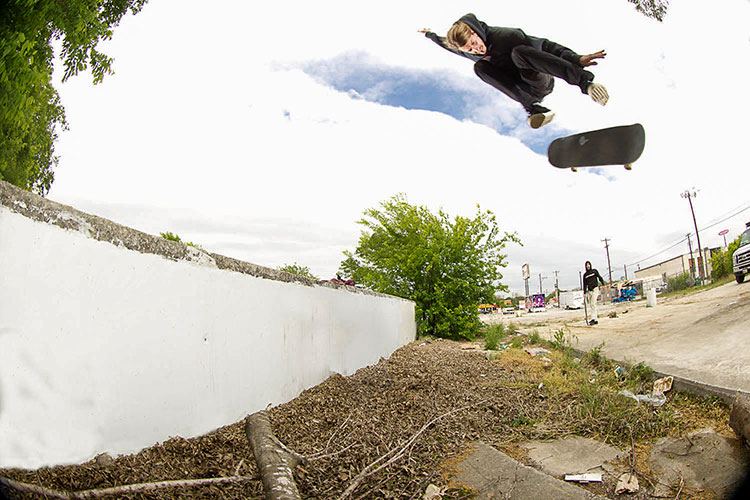 Everything is bigger in Texas, including Jaws’ backside flips. San Antonio served up some success

So what’s the deal with kambo? Can you explain the process a bit?
It’s pretty much a purge or like a super heavy detox. We heard about it from our yoga instructor in Hawaii who asked if any of us wanted to try it. I thought it sounded interesting and did my YouTube research and figured why not? It’s the secretion scraped off a frog’s back and what they do is burn three to five little holes on your arm and then put the secretions into your body and then you pretty much just puke, sweat and shit everything out of your body for about an hour. That hour was rough but afterwards it felt like I woke up from a ten-year nap. I had so much energy and no urge to smoke or drink. That night was the best night’s sleep I have ever got. I felt great for four or five days. It just seemed like a really good tool to detox your body.

So the other day in San Antonio, the dude showing us around took us to “The Jaws Gap.” How many different Jaws Gaps have you been taken to?
I feel like there is one in every city. It’s always, “I got a spot for you…” and then we go look at a massive gap. It’s actually pretty sick, though. If it is coming from a good source then chances are it’s going to be possible. Like the one the other day worked out.

What’s the most absurd thing someone has taken you to? I can’t imagine what your DMs look like.
Probably just crazy roof drop ins. Like, 20-foot drop in to then fly off a roof where you would have way too much speed to take any sort of drop at the end. If it’s stairs or a gap, though, chances are something is possible. 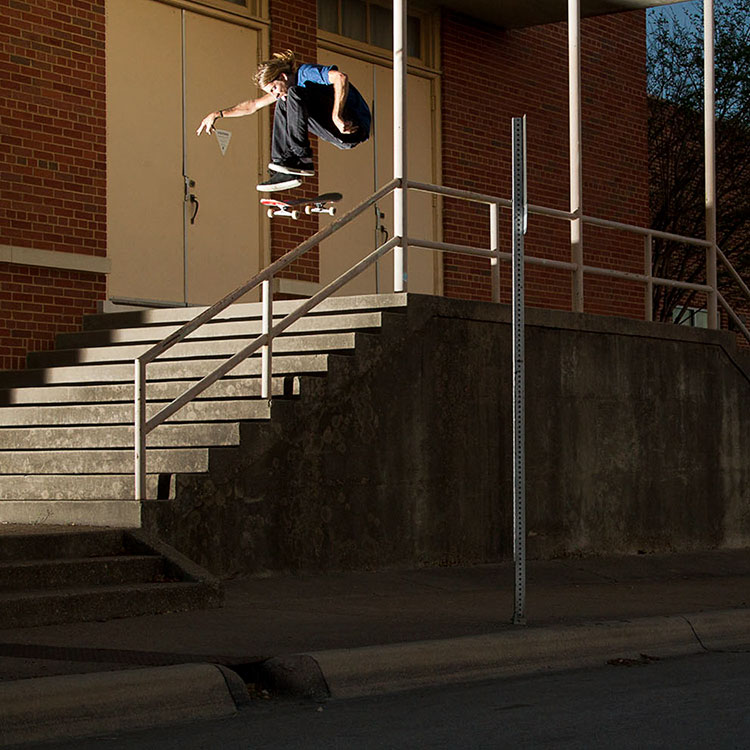 Let’s get back to Sweetwater Street. How did you meet Dakota?
I met Dakota through skating the curbs at my old elementary school. One day my brother and I met up with my friend Brian there and Dakota showed up with him and I just remember trying to manual the hopscotch squares with him and we have been friends ever since.

Was there a nuclear power plant on the block or something weird? How did both you and Dakota turn out the way you did?
I think it was just that both of our parents were really supportive. My dad also used to always tell us to do something that scared us at least once a day, so that always sort of stuck with us. Plus, we were young so we were never really afraid of getting hurt, it was more just trying to keep up with each other. Like if Dakota boardslid the rail at the park I knew I had to try it. Then eventually Dakota got too good at rails and I thought it would just be easier to jump down the stairs.

Do the big drops still scare you? What has been the last scary trick you’ve tried?
I guess the one the other day just because if something weird happened on the flat gap I’d be going too fast to stop before the roof and the fence. I get scared when other people get scared for me and I saw Dakota just chilling in the van, not even paying attention, so that was kinda in the back of my head too.

Okay, well, that’s all I got. Anyone you would want to thank?
Just Leo and Dakota for letting me jump on this trip. This part wouldn’t have happened without them. And then of course STRFKR for making the awesome music they do and for doing this board with me. 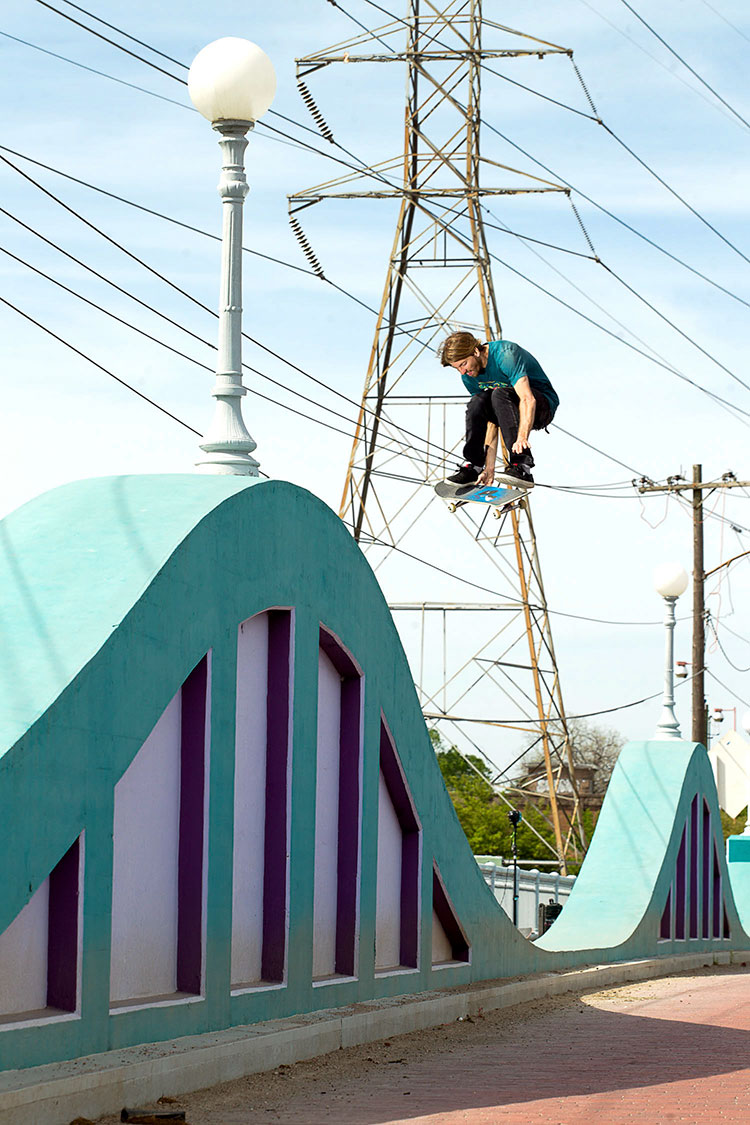 Jaws pulls the ever-elusive street kickflip stalefish out of his bag of insanity. Great part, JWS!