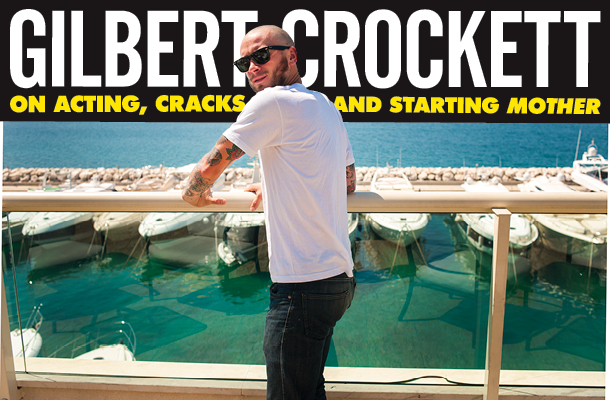 So I saw the ad, Gilbert. Tell me about your new board company, Mother.
It’s a board brand out of Ohio with me, Jake and Tyler and it’s being run by Chad Bowers who was the Workshop team manager for the last six or eight years or something. And yeah, it’s gonna be hopefully something different. We’re gonna all be a part of it, you know, everything that you see, it’s gonna be there for a reason We have a lot of say in what we want on our graphics, with the ads and what all the videos are gonna look like, so it should be cool.

What were some of the other names you considered?
For the brand?  I think Ceremony was probably the only other one that was taken seriously. But I don’t know. Mother was the only one that I really liked. I don’t really remember any other names.

So how did you pick the team? How did you decide who was gonna be on this thing?
Well, Chad did that but I don’t think any of us wanted to ride for anything that already existed. We’d been talking to Chad about this since Workshop fired all of us. And everyone’s friends, everyone’s sort of on the same page. We didn’t want to do some of the other bullshit that’s already there. I don’t think any of us wanted to be doing something just to do it anymore, really.

That’s just what I heard, bro.
I don’t think I’m at liberty to talk about that.

So what is Mother all about?
For me it’s just, like, these are dudes that are real street skaters and these dudes are gonna do something because they want to do it. We’re not trying to be on any trend train or worry about the way other people operate. The idea is pretty much to do something that doesn’t operate by the same set of rules as all of these other brands.

But at the end of the day you’ve gotta fucking fill those seats; you’ve got to push this wood. What are you gonna do to make sure that kids are out there buying this shit?
I don’t know, maybe they just won’t buy it. I don’t think Chad thinks that way. I don’t think that way, so if it works it works. If it doesn’t then it doesn’t. 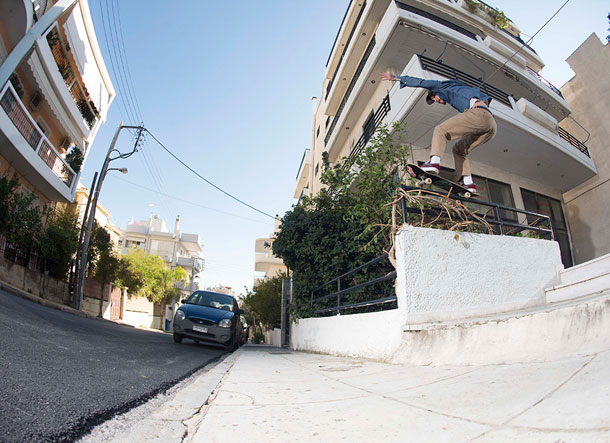 He cut down a tree for this. 5-0 fly-out into the street. Photo: Brook

Cool. You got any ams in the running?
We do not. We’ve got nothing.

So where do the kids send their tapes?
Where do they send them?

Yeah, where do they send the links?
I don’t know. Should I put my address in the mag?

I’m just saying if somebody wants to get on the team, what kind of rider are you looking for out there?
Me personally, I don’t know—someone that cares about skateboarding more than he cares about points, you know? Someone who cares about just doing it. Keeping it real, pretty much. Doing it for the right reasons.

What would you say are your biggest influences creating this company? What’s getting you inspired to put this together?
Music and art, pretty much. Those are the two things that it’s inspired by the most. So when I have ideas for a graphic or the way a font is written or whatever, it’s coming from the art that I look at and the music that I listen to and the album covers and the lyrics from songs, shit like that. It’s sort of the same with the other dudes. We listen to a lot of the same music, so a lot of it comes from the stuff we listen to.

I’m not trying to blow your shit up here, but what’s in heavy rotation on the Gilbert Crockett playlist?
I’m not putting that in Thrasher.

What do you mean? We’re the fucking Bible. If you can’t put it in Thrasher then where are you going to put it?
Nowhere. I hate blowing shit out. You know when you have that friend who blows music out, like, you get into his car and he listens to the same fucking song all the time? I don’t even like telling him what I listen to. 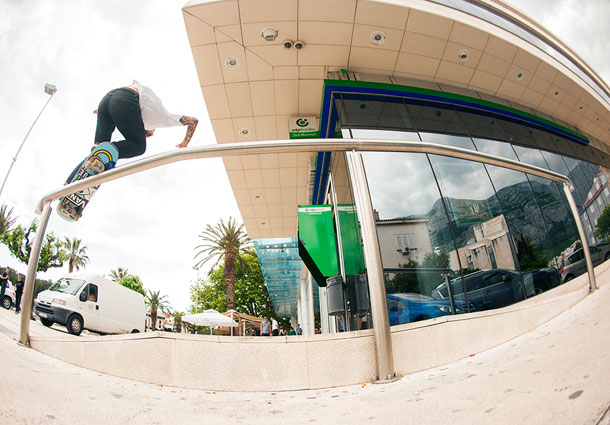 Dude, there’s a lot of secrets with this company already.
That’s just my personal music selection.

So I’ve seen you’ve been doing some great artwork, like tattoo-flash-inspired type stuff.  Are you gonna be drawing the graphics for Mother?
As of right now, no, but I’d like to do a graphic eventually. We’ve talked a little bit about it. We already have the first boards ready to go.

So is that something you’d want to do in the future? Doing more kind of design, illustration artwork-type stuff?
Yeah, but I also want to do like ten other things, so I don’t really know what the fuck I’m going to do.

But you’ll wear a denim jacket over a denim shirt?
Yeah, I don’t really do that often or maybe I don’t do that, but I’ll go denim top denim bottom. I’m wearing that right now as I’m talking to you.

Do you own a pair of chaps?
No.

What about cowboy boots? How many pairs of cowboy boots do you have right now?
One. Yeah, but I wear them.

I know you and your friends in the Bust Crew hit the streets hard—I’m talking, like, curbs, cracks, trees, bumps, it’s not just all fuckin’ handrails with you guys.
No, it’s not.

Would you say that’s kind of the direction you’ve been going with in this Vans video?
Well, I tried to not have any handrails in my part for the Vans video but I think I have one, maybe. I just pulled away from doing the same shit. How many years can you skate the same fuckin’ obstacles?

So what are you out there combing the streets of LA looking for these days?
I don’t know.  Like a wall or, yeah, a crack sounds good, like a big-ass crack to skate. You know, fucking anything! I just like street shit. To me, I like to skate shit that when you’re a kid it was relatable. If I see footage of a dude skating something in a neighborhood or in a city downtown, there’s something relatable—like a wall or a Philly step or something where if you leave your house right now you’re gonna find it—a curb cut with something behind it or a sketchy fucked-up ledge or whatever. It’s something like when you’re a kid you’d watch videos and be like, “Oh, we have those in my town.” You know?  Are kids gonna relate to a 20-stair handrail?  Are they gonna go find one that’s skateable and think about skating it because they saw a video of it?

The roots. How many tattoos did you get this week?
None.

Are you putting them on yourself yet?
Yeah, I gave myself a few a couple of years ago.

How’d they turn out?
Pretty good. 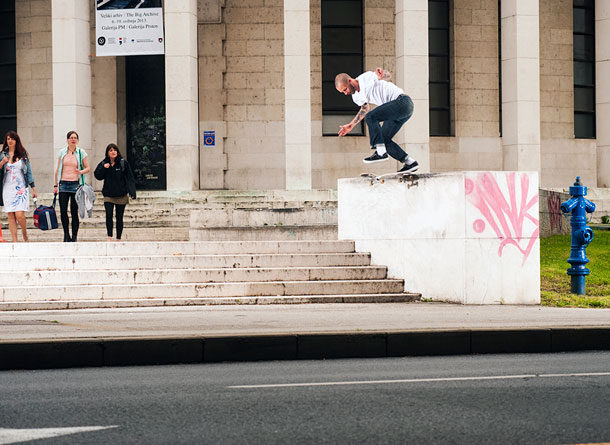 Kickflip back tail, high as a washing machine. Photo: Burnett

Okay, let’s talk about the ten other things that you’re excited about. Just give me three of them. Bronco busting? What else?
Horseback riding. I’ve been doing a little bit of horseback riding. I’m trying to learn how to make clothes.

Horseback riding, sewing, how about roping?
No, no roping. Doing illustration. I guess. Drawing, painting. And running. I started running around this lake by my house.

This is getting really disappointing. Don’t you know pro skaters are only supposed to skate and look at their iPhones?
I know.

You’re fucking blowing it.
What else do I do? I feel like that’s not ten.

Those are pretty good, though.
Let’s see. I’ve been doing a little bit of acting for the Internet.

Oh, I like that. Do you mostly express yourself in the six-second format?
Yeah, I usually stick to Vine.

What’s been your most successful bit so far?
Um, there’s one I put on Instagram of me dancing in a cowboy outfit which was on Vine and Instagram. That was probably the funnest and most successful. 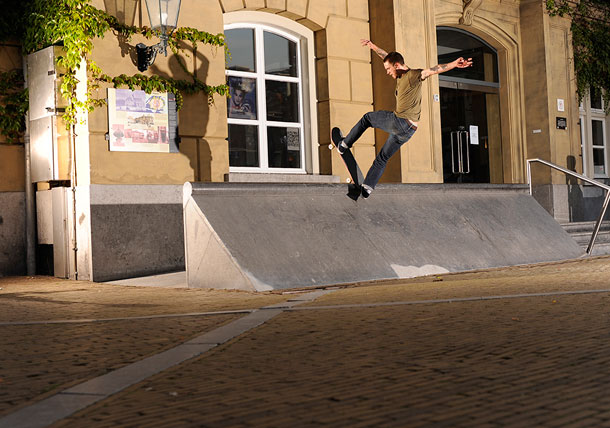 Cowboy dancing?
Yeah. Um, I’d say dancing. I do a little bit of acting sometimes but it’s usually by myself. I kinda, like, play one role talking to myself or something.

So tell me this: is Jake Johnson crazy or is he just a misunderstood genius?
I’d say misunderstood genius, if it’s one of those. Yeah, I was with Greg Hunt yesterday and Jake had been texting him and was joking with Greg ‘cause he’s working on the Vans video and Jake said, “What’s that? I haven’t heard about it.” And Greg believed him. But he was just fucking with him. So I don’t know. He’s really fucking smart and he’s crazy talented at just about everything. I don’t know if people know that, but yeah, they have to.

Okay, so in conclusion, why should somebody go out after they read this interview and buy a Gilbert Crockett or a Tyler Bledsoe or a Jake Johnson Mother skateboard?
Hopefully because they can relate to it. We’re all pretty different dudes but I feel like a lot of these boards—they’ll be able to see something that they relate to whether it’s our skating or the art or that we wanted to put out our own boards or whatever. Everyone’s keeping it real and no one’s trying to be something that we’re not. We like what we like. We’re putting out what inspires us in skateboarding and hopefully people will like it, too.

You heard it, kids. They’re the strongest, lightest boards. Go buy one.
Yep.