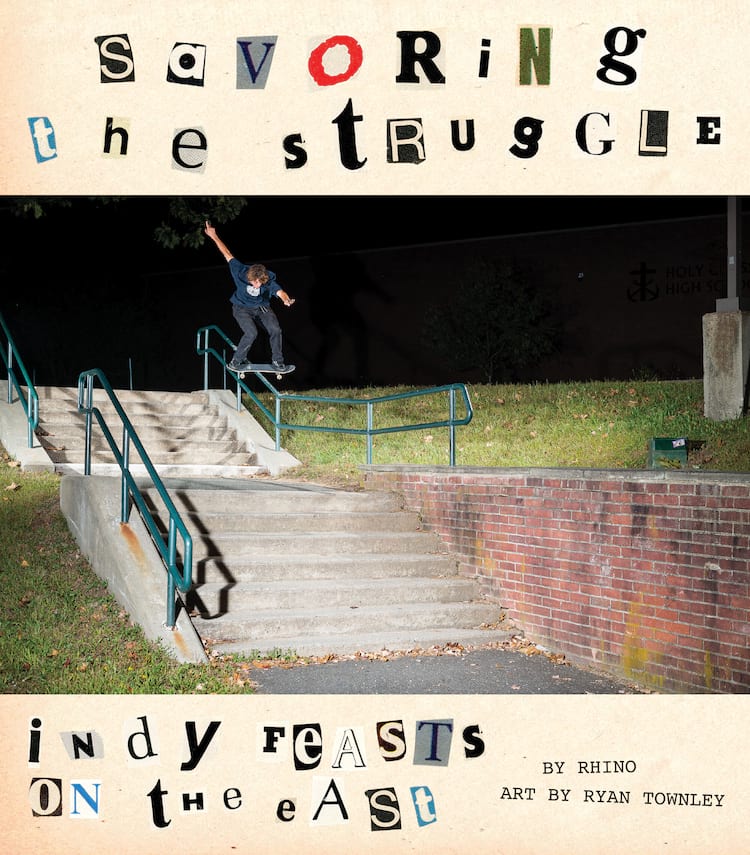 We tried to skate this school during the day and the principal called the cops on us. We came back at night and Willms scored an A+ for this boardslide onto the ledge. The school of stoke has its own grading policies

I grew up on the East Coast and let me tell you, it’s no fuckin’ joke. Walking to school in the winter, sometimes it’d be so damn cold I’d have to put hot baked potatoes in my coat pockets to keep my hands from freezing. I’m not shittin’ ya. GPS won’t help you out here because the roads are constantly under construction. Wanna skate a backyard ramp? Hope you like soggy plywood and monster mosquitoes. The skate spots are full of massive cracks and you’d need an extra job to pay your Bondo tab, if you were gonna try to fix ‘em all. Not to mention most of them are haunted by ghosts of the American Revolution. The people are gnarly, too. Try asking for a side of ranch to go with a slice of pizza in Boston, NYC or Philly and you’ll get a response like, “Ranch for what? You didn’t order a fucking salad!” Even our spot guide’s name on this tour was tough—Tim Savage. You don’t fuck around with a dude with a name like that. But despite being rugged as hell, there’s a certain allure to skating out here. Kinda reminds me of all those people who die trying to climb Mt. Everest every year—there’s just something in our human nature that thrives on the struggle. That being said, I brought some bros from California (and a few other stragglers) out to the East Coast to crush some cobblestone, barge some bricks and bail out some pits. Was the expedition a success? Did anybody die? Scroll down and let’s begin our ascent from basecamp. 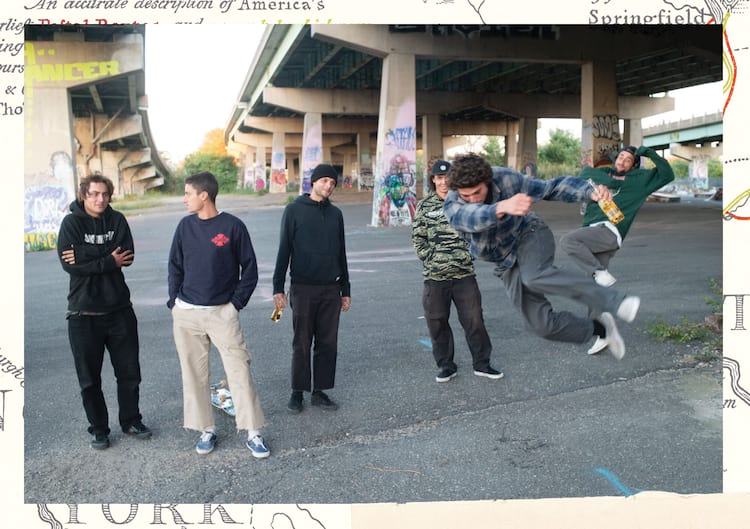 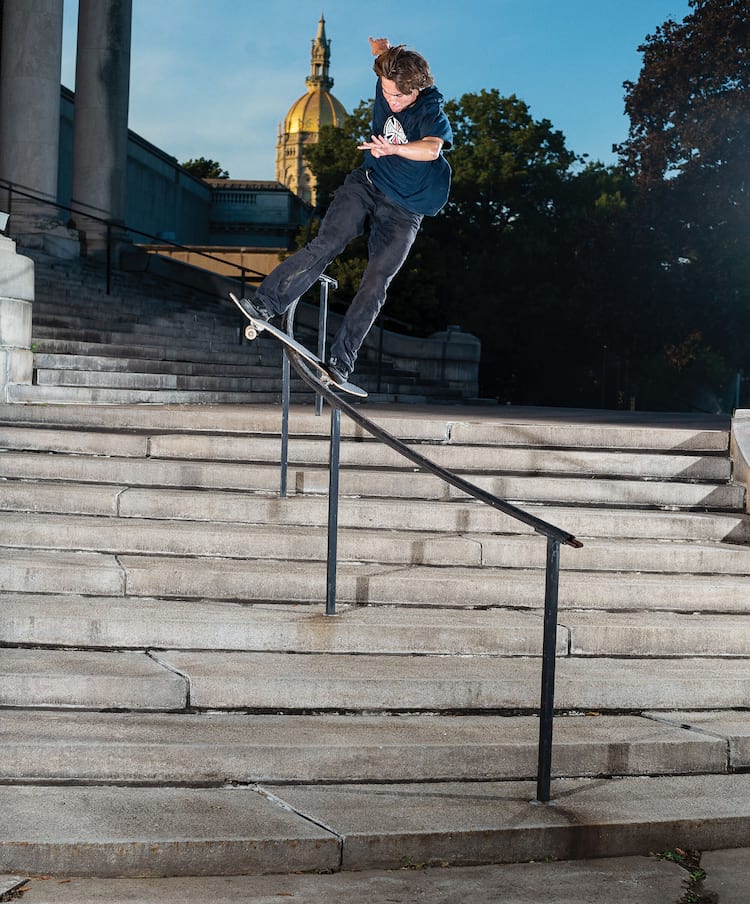 Alex Willms front lips a curved tall boy with Connecticut’s capital glowing in the background. And what’s that seeping up from the crack? Probably piss 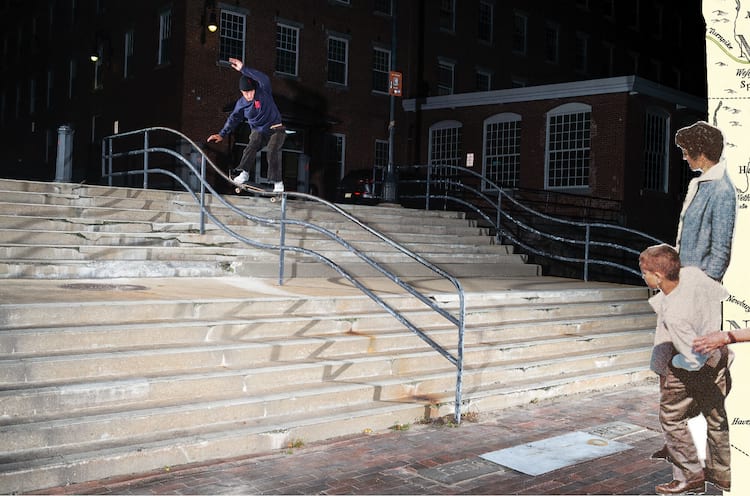 “Live Free or Die” is the best state motto ever. Ducky escapes death with a wavy Smith in New Hampshire. Ah, sweet freedom 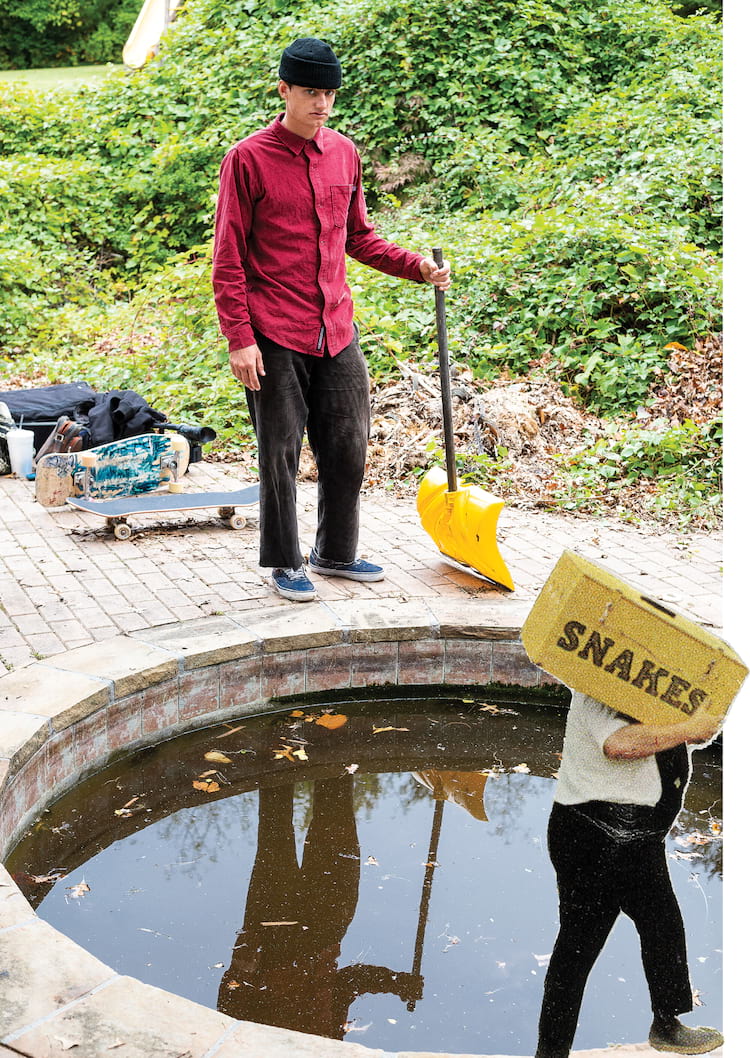 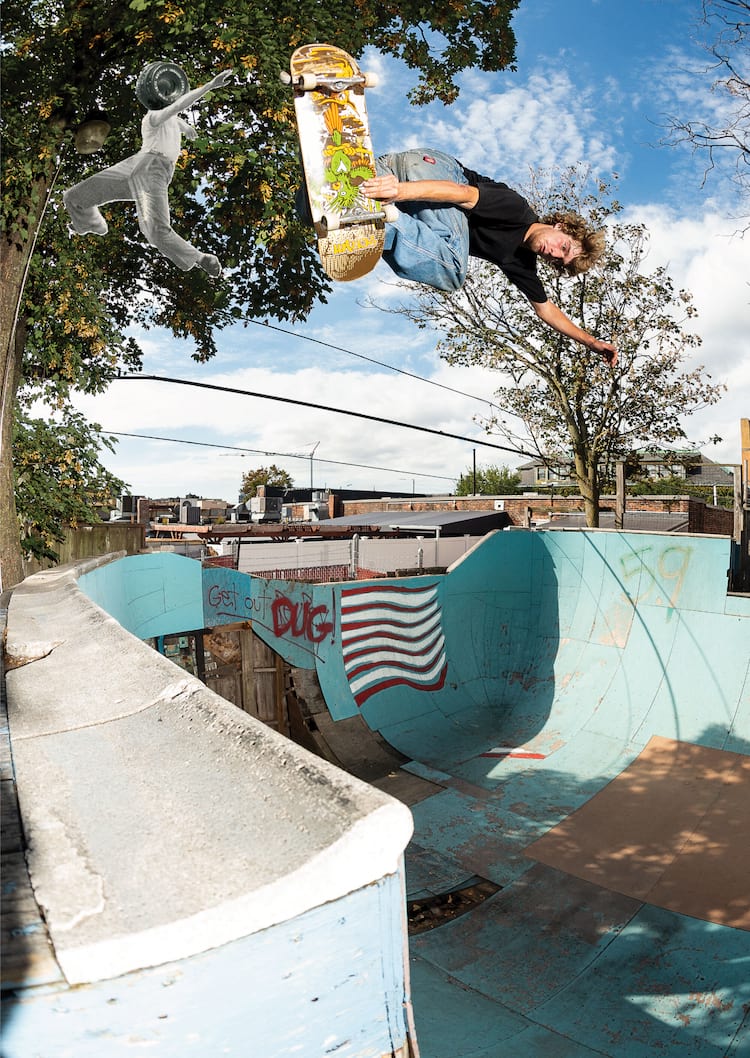 Beanwater blasts off in Beantown! Lindloff scraped some sky at the Hell Gate ramp in Boston before he got shipped back home. Heal up, Jesse 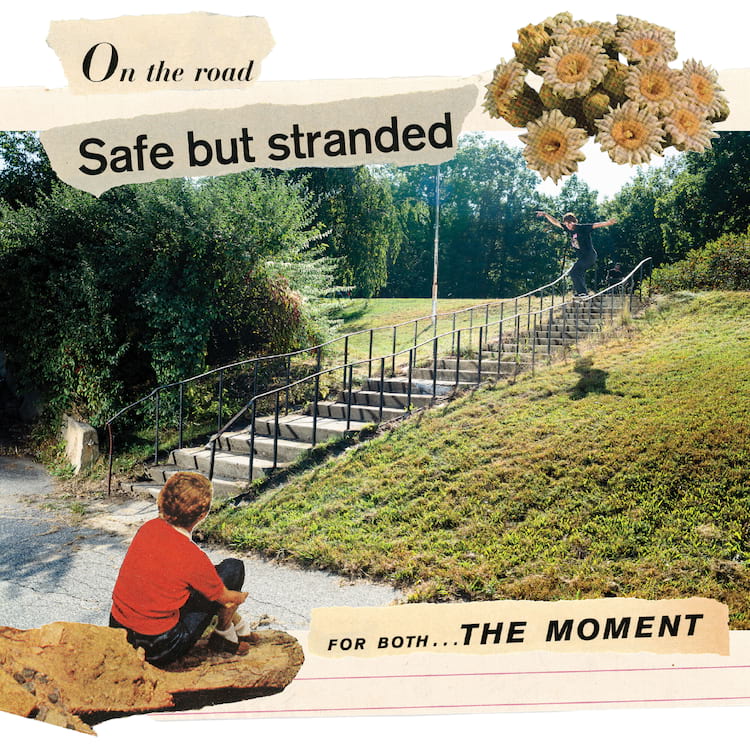 Rusty rebar posts and a rickety wrought-iron top, this rail is about as East Coast as they come. Willms tames the metal snake with a backside 50-50. Sssssick 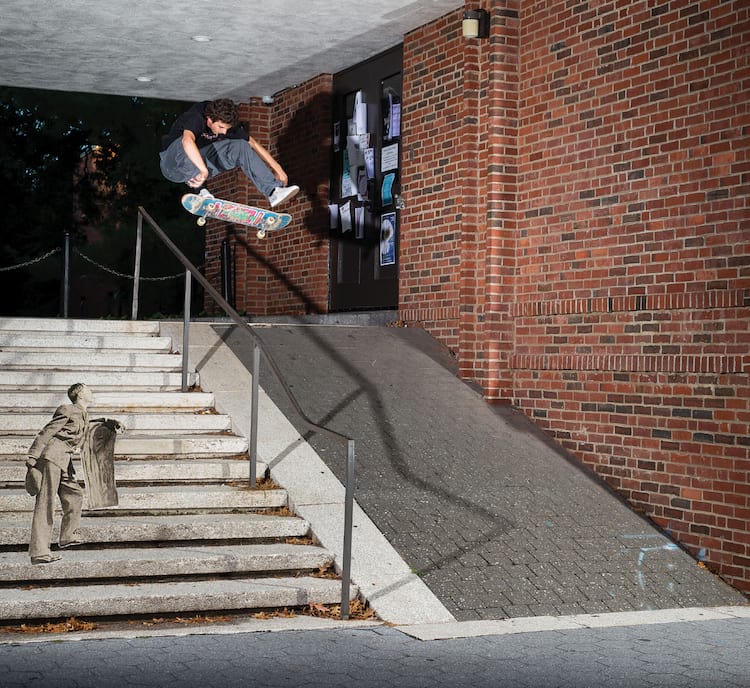 The frat boys at this college were giving us the stink eye. Whatever, at least we don’t paddle each other’s butts for fun—we let the streets kick our asses. Manch, frontside flip into the bank 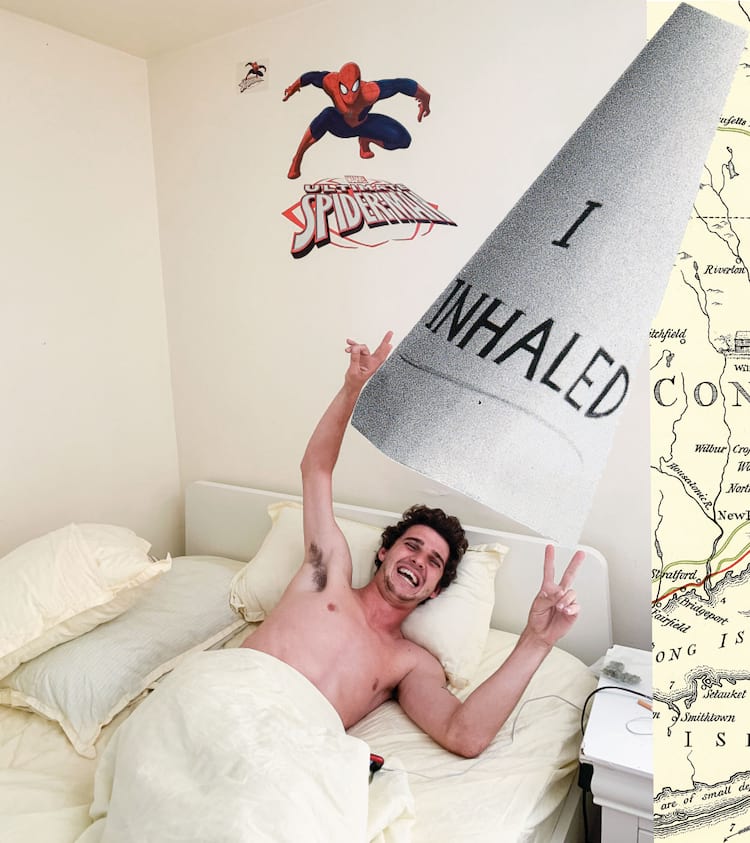 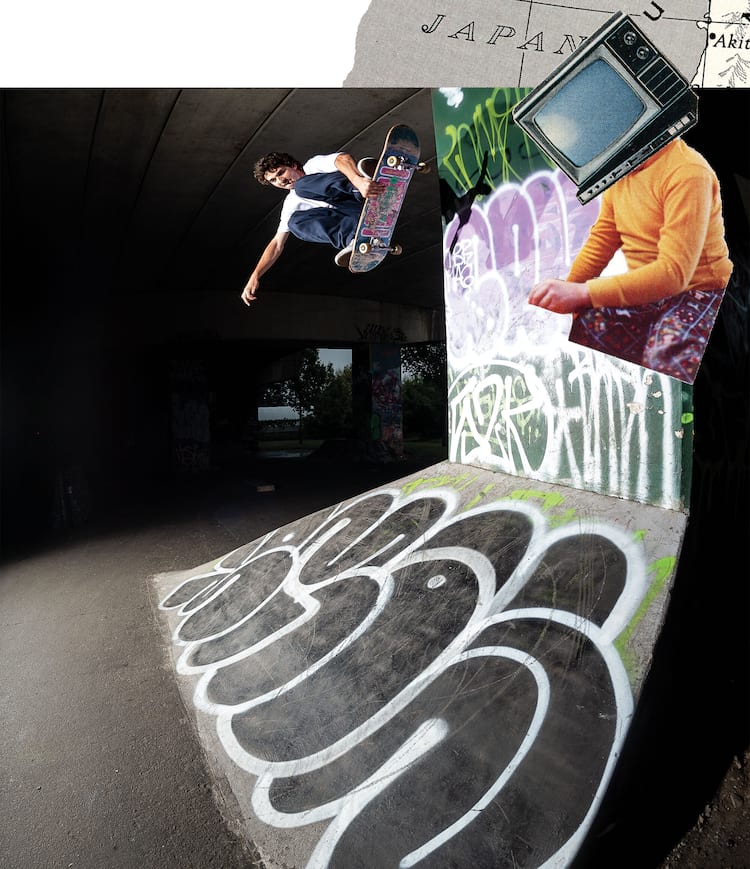 “This one’s for my boy Mike Carroll!” Manchild screamed, followed by, “How the fuck do you do a Japan air?” He figured it out pretty quickly 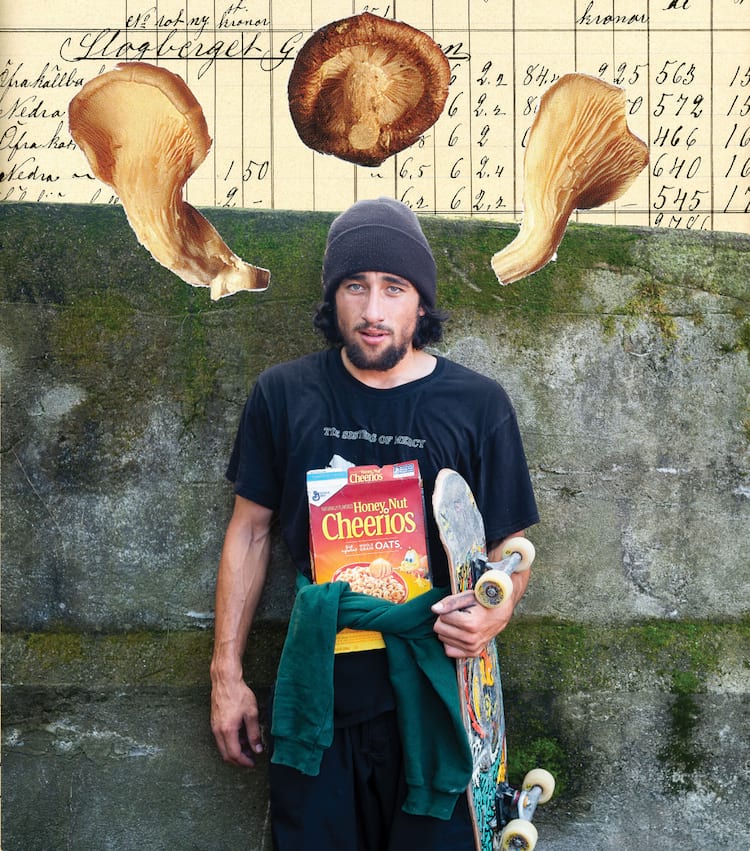 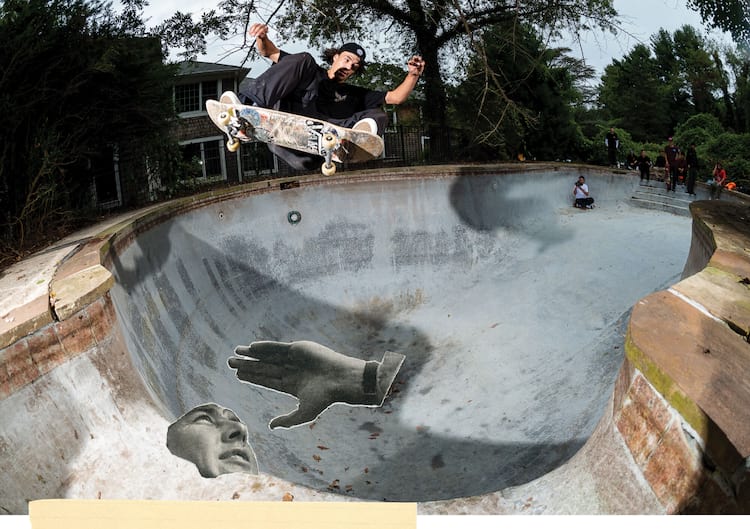 We found three pools at some vacant mansions outside of NYC and it felt like we were back in Cali. We kept waiting for Salba to hop over the fence. Van Vark, channel FSO 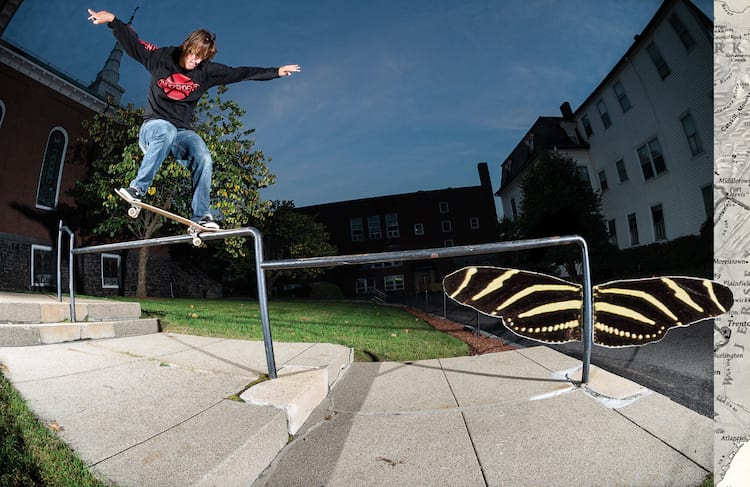 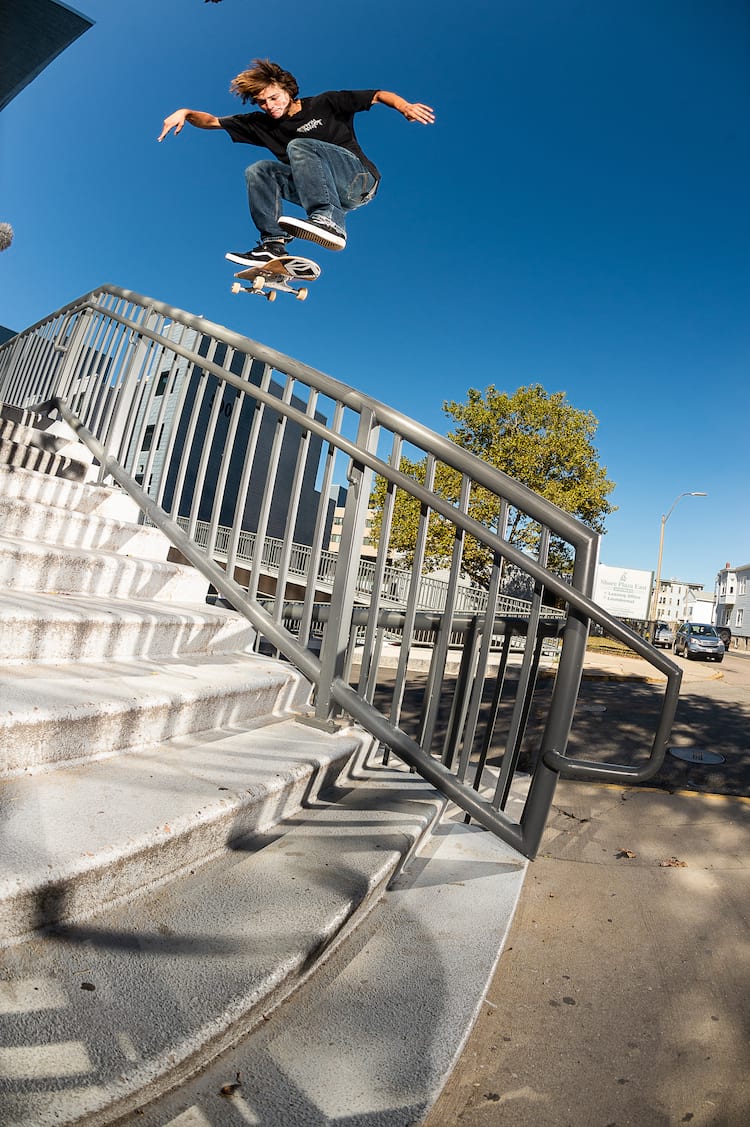 A little kindness goes a long way, Alex got this kickflip back lip at the only spot where the locals liked us 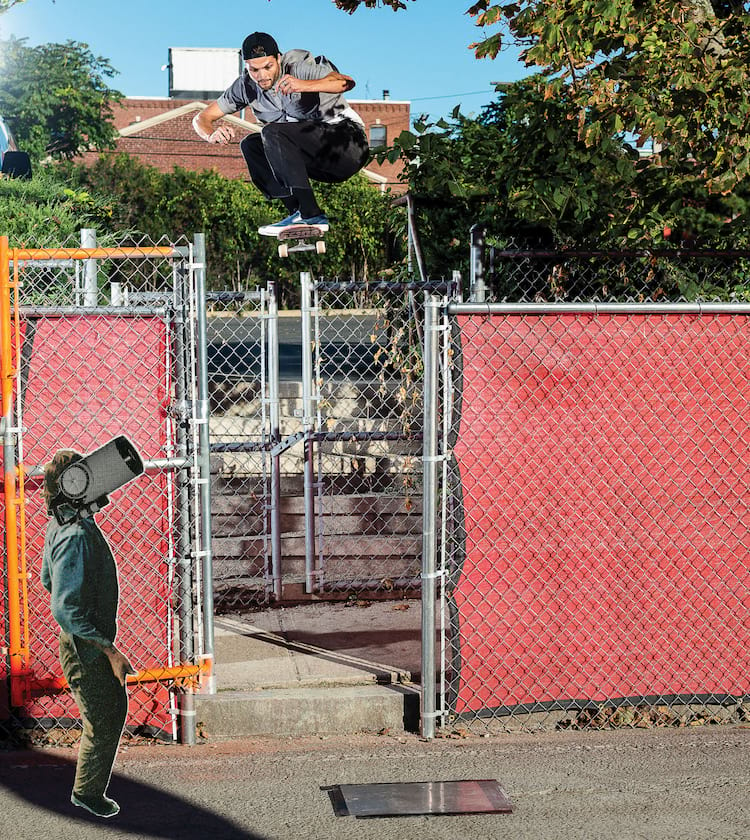 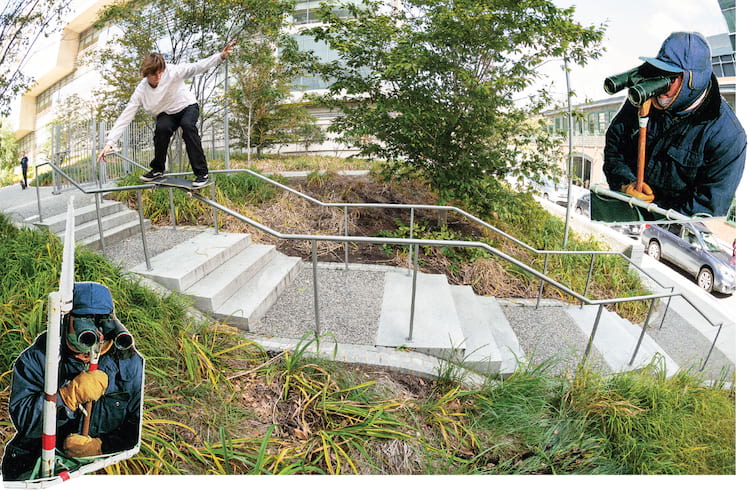 Alex missed some classes to come on this trip. He should have just told his professors he was taking a field trip to MIT. Kinked grind at the number-three-ranked university in the US 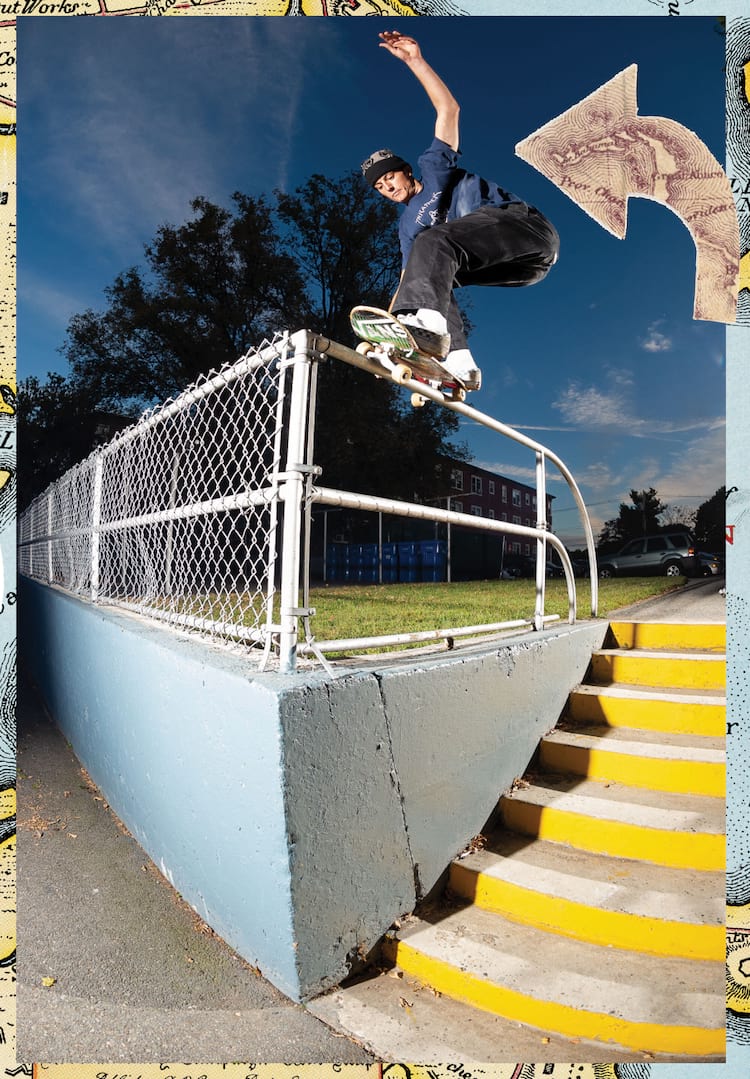 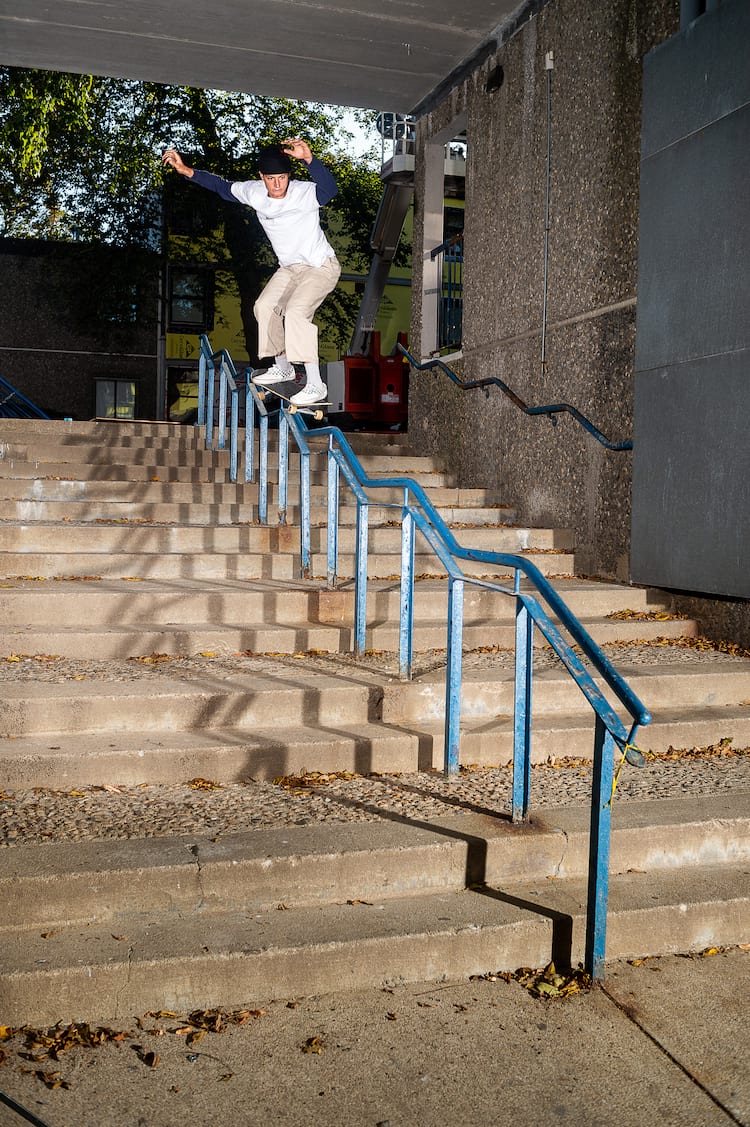 Proving my point, Ducky also took down a dozen kinks 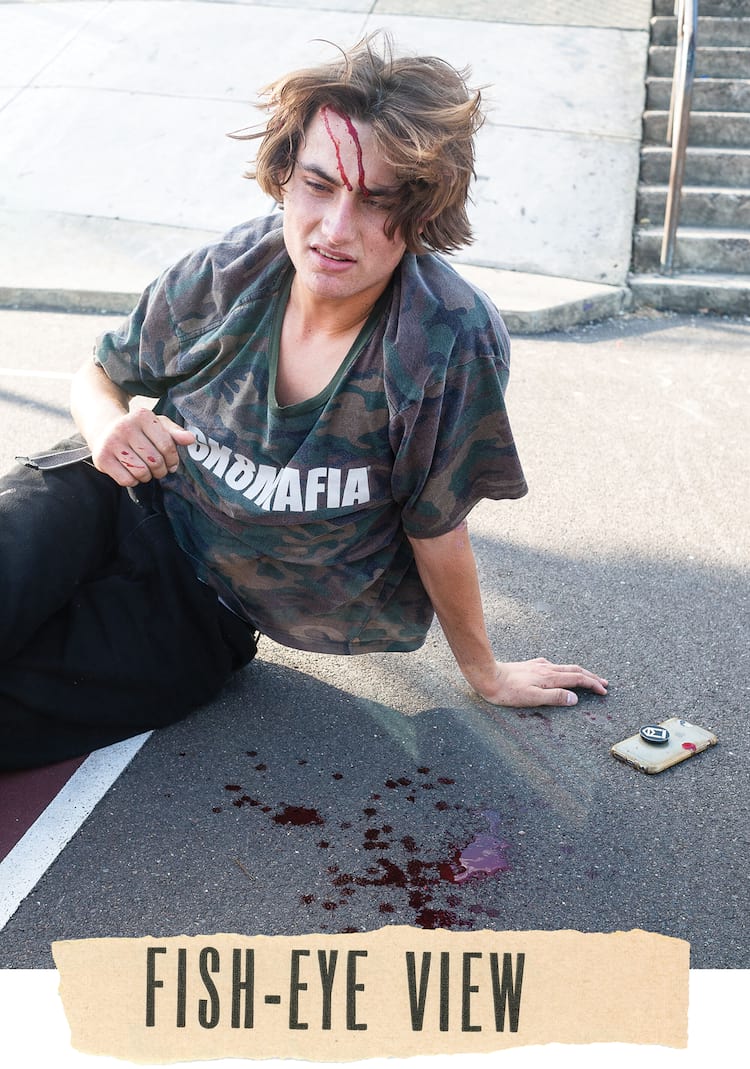 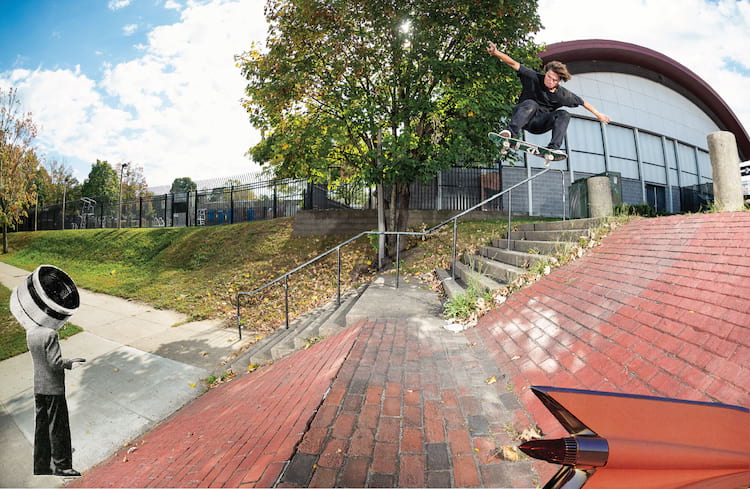 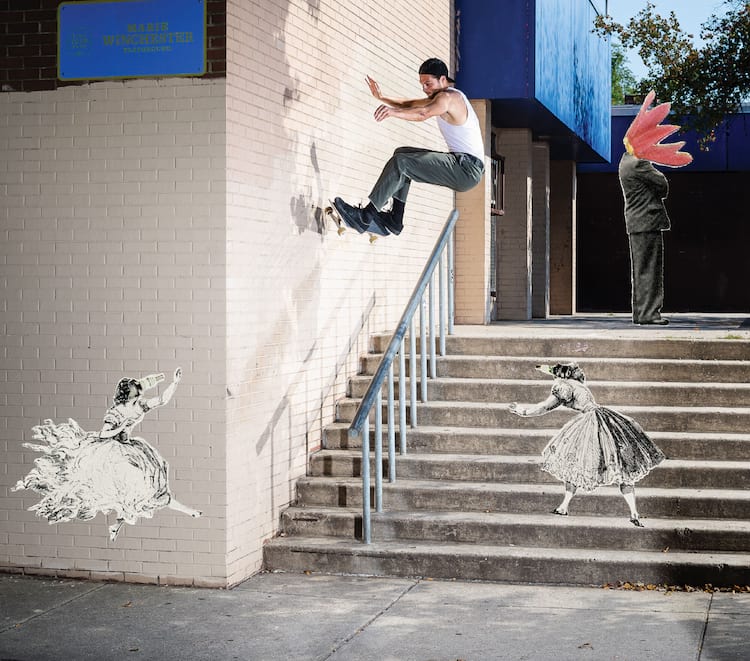 Townley knows the rules: keep your damn hands off the wall. Ollie over to wallride then straight to Gino’s for a veggie cheesesteak 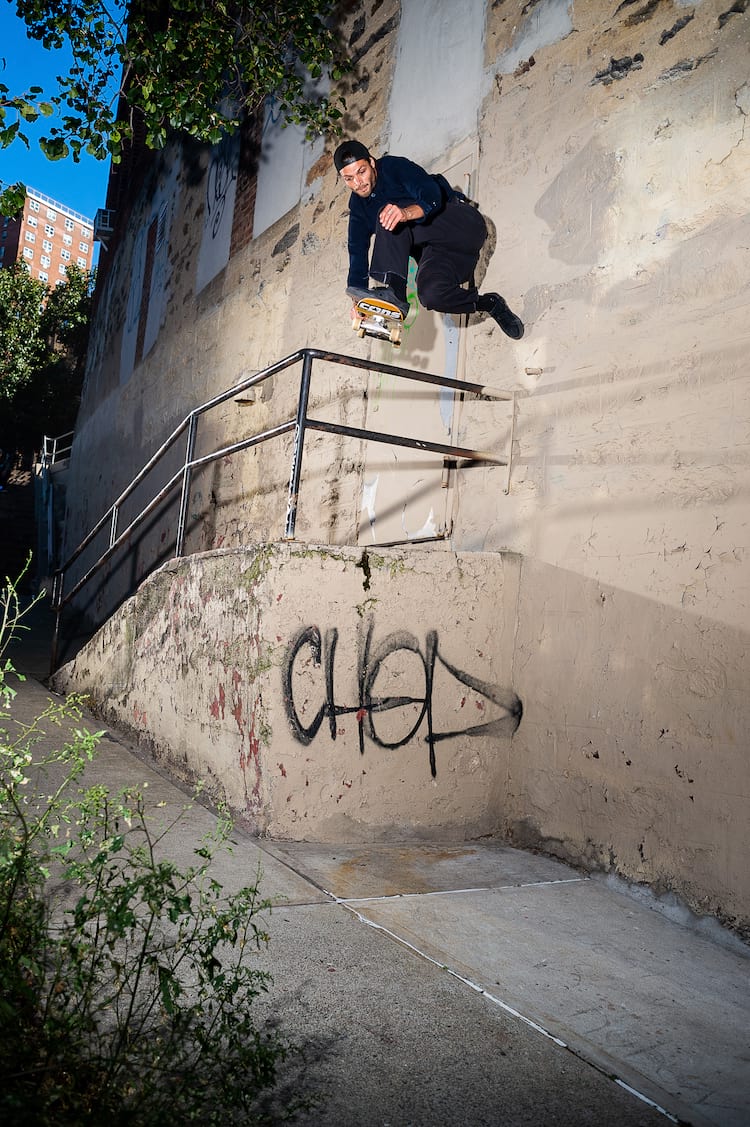 Chippin' more paint off the walls, Townley plants a fast one in the Big City

We spent 12 days in the 13 colonies, put 6,650 miles on the van (I drove it out from SD), burned through four cans of Bondo, got heartburn from eating nothing but pizza and cheesesteaks, Erick got heat stroke and couldn’t use his legs for two days, Jesse folded his ankle, Willms got a concussion and fractured his collarbone and a dickhead elementary-school principal called the cops on us. Yet despite the downers, everybody loved suffering on this mission. Palm trees and perfect ground are great and all, but sometimes you need a vacation from paradise. Luckily, the East Coast will always be there, waiting to scrape your skin off and wheel check your ass. Sign us up. We live to bleed. 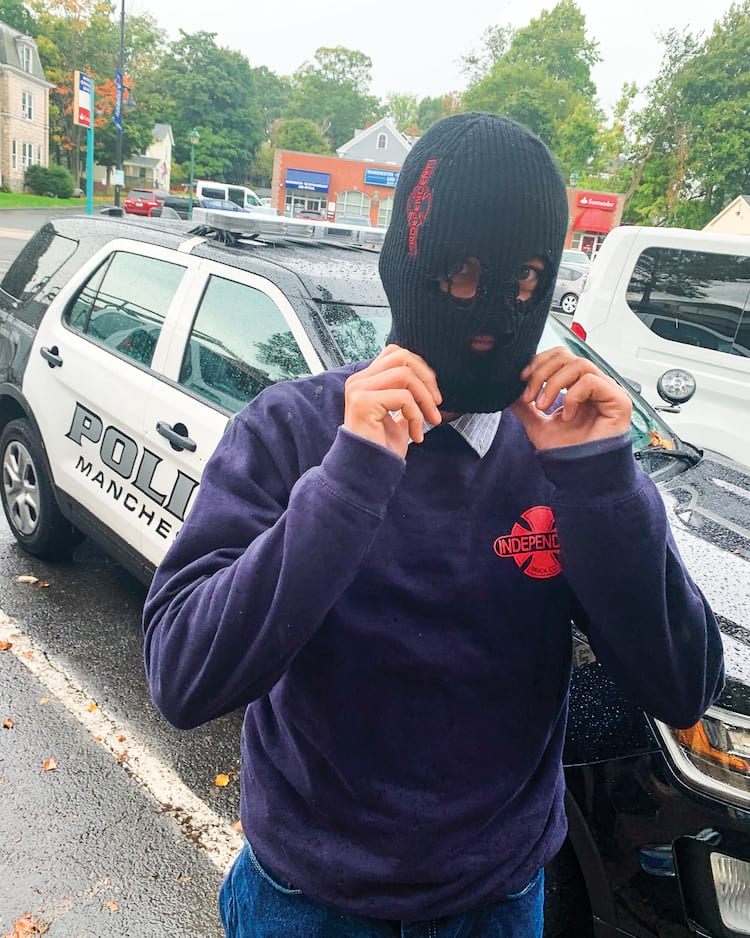 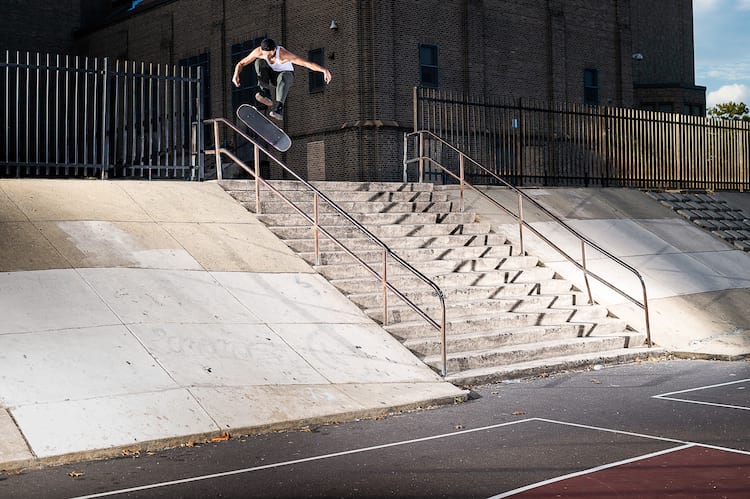 Gettin' close to the end, Ryan flings a spring-loaded 360 flip into this East Coast icon 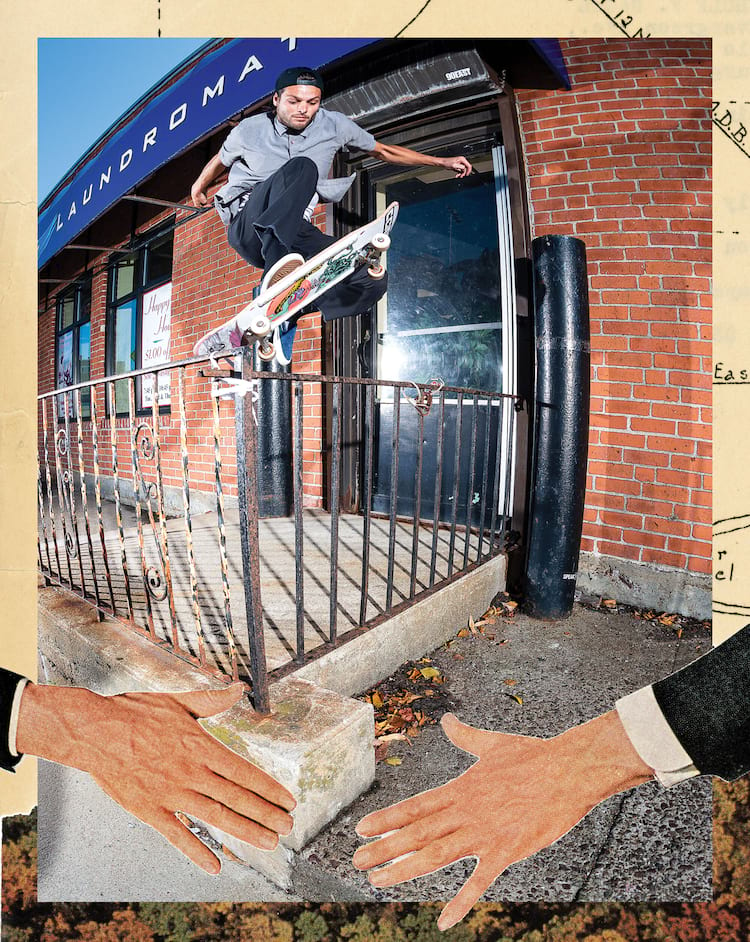 He made all the collages in this article and sliced through this no comply in Boston. Townley’s talents know no bounds
© 1981–2022 High Speed Productions, Inc.