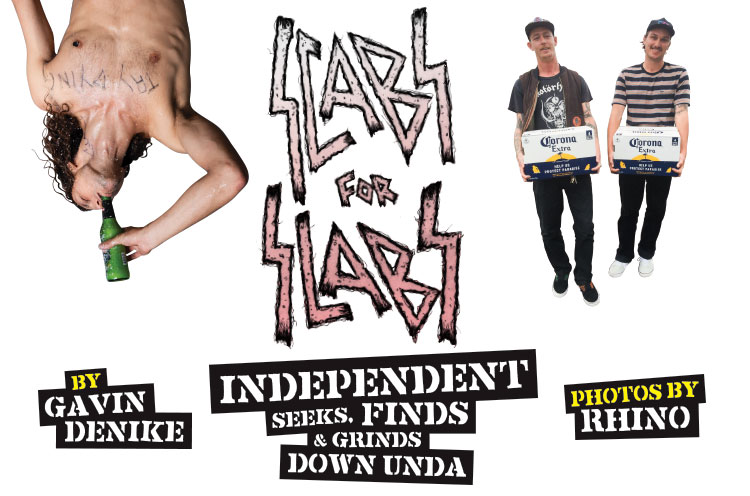 "Indy. Australia. Make it right!” Click. This was my one-sided phone conversation with Phelps this past December. Everyone knows Jake is notoriously an asshole, but he’s SKATEBOARDING’S ASSHOLE. At times, alongside Rhino and Ewan, I questioned why we brought this piece of dirt along for the ride, but Jake brings something special to every session—he’s relentless. Without Jake you wouldn’t have this epic crew, consisting of two SOTYs, one Oz SOTY, three runner-ups, one hungry am and The Provider. Without this group of misfits you wouldn’t have Slayer cranked to 11 at all times, consistent steady revs being fired up alongside clean rips and heavy sips—but most importantly, the pure unconditional stoke to constantly seek, find and grind by any means necessary. You take the good with the bad. 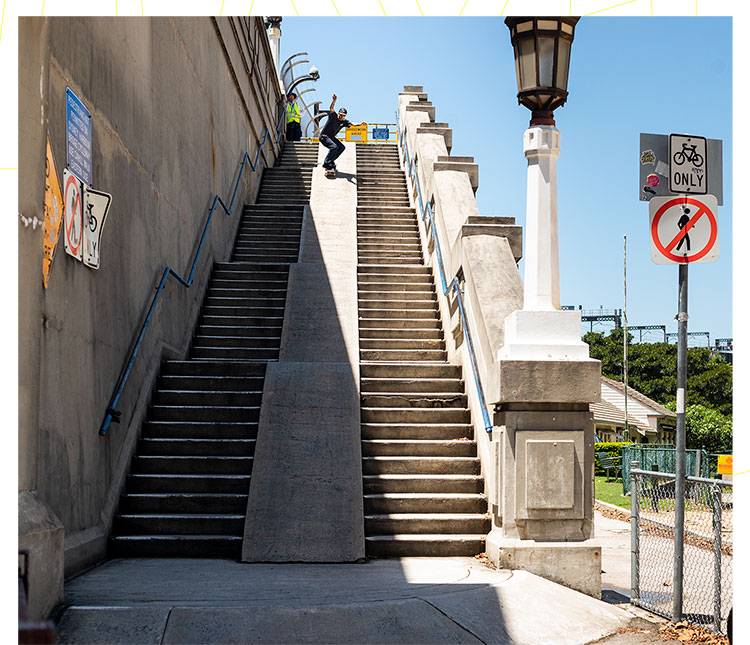 The security guard at the top of this set was everywhere we went. This shit he just watched… Milton almost clipped a pole at the bottom. So close 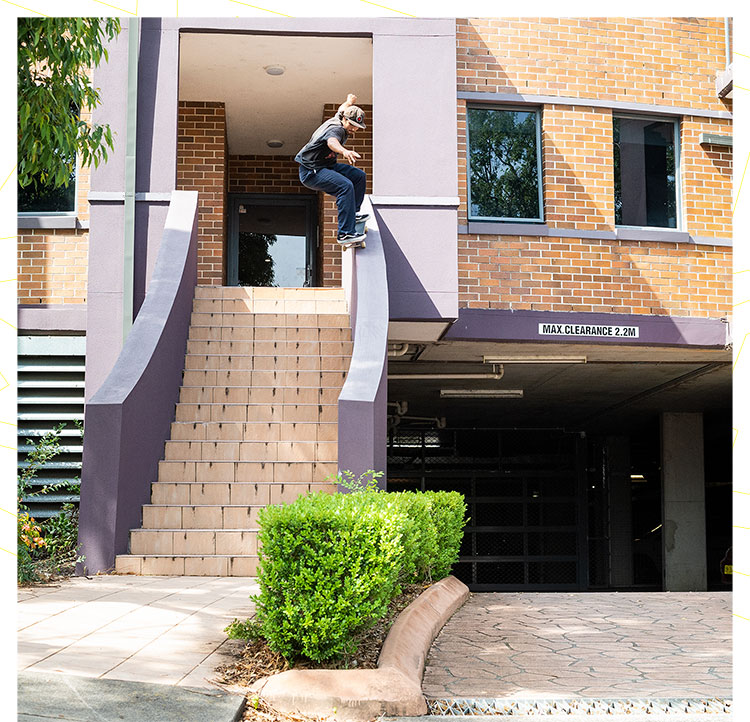 Oz builds ‘em hearty. Delfino gets down. Long way from the Goldy 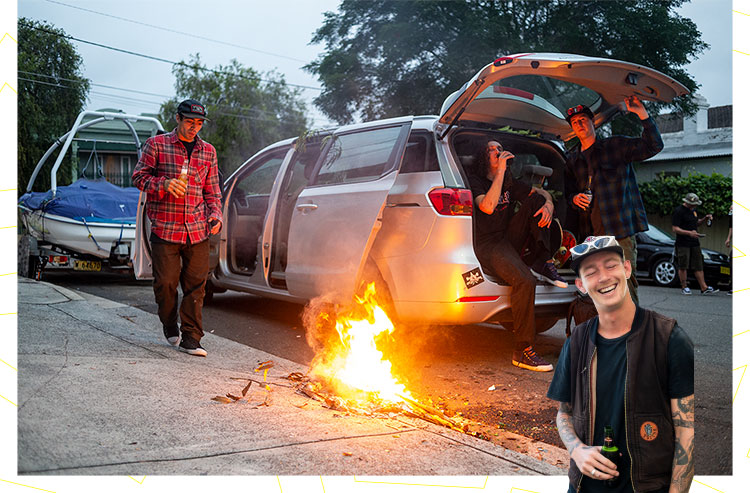 NEVER MEET YOUR HEROES
Straight off the 15-hour flight, we dropped our bags at the hotel and hit the streets of Sydney for a mandatory meet up with skateboarding’s favorite crash-test dummy, Dustin Dollin. You know the old saying: never meet your heroes? My 14-year-old self, watching Baker 3 on repeat, screaming along to Child of Bodom should have been given such advice. Our unofficial tour guide soon turned into a brew-fueled madman screaming “Shakeys!” after every make, bail or sail with his hot, horrid cigarette-scented breath grazing the back of my neck as I guided our Hell Ride through Sydney’s suburban maze. I would soon find out that the Shakespeare Hotel in Surry Hills was Dustin’s poor excuse at an attempt to end the day early. This was his escape route to get the crew to his home away from home—his local pub to enjoy the self-proclaimed “best fish tacos,” but not before getting treated to a star-studded, half-drunken self-guided tour of every spot in Sydney he’d obviously conquered 10-15 years prior. With the infinite dishing out of self-hype from our backseat driver, the crew wanted to see Dustin put his money where his mouth was and get at least one clip. True to form, DD tackled a virgin, untouched crusty spot under the Harbor Bridge. With a healthy supply of Peroni on deck, he soon rolled away, laughing like a half-pissed hyena. By the end of the trip Dustin had definitely earn his Jäger, especially with the infamous sliding nap slam heard ’round the world on the last day of the trip. Cheers, Dusty! Love ya, you dirty-ass cunt! 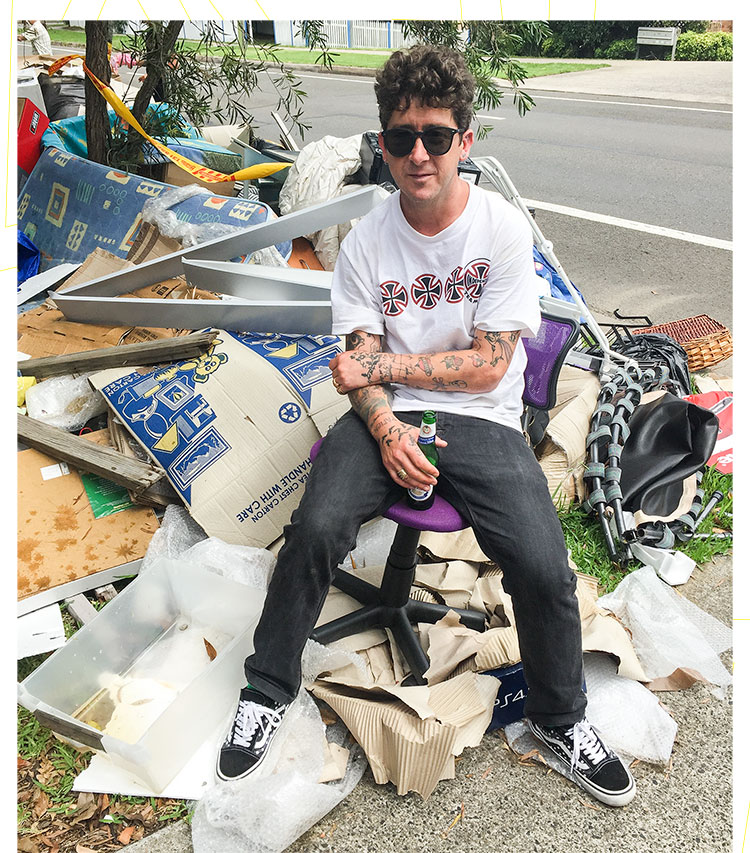 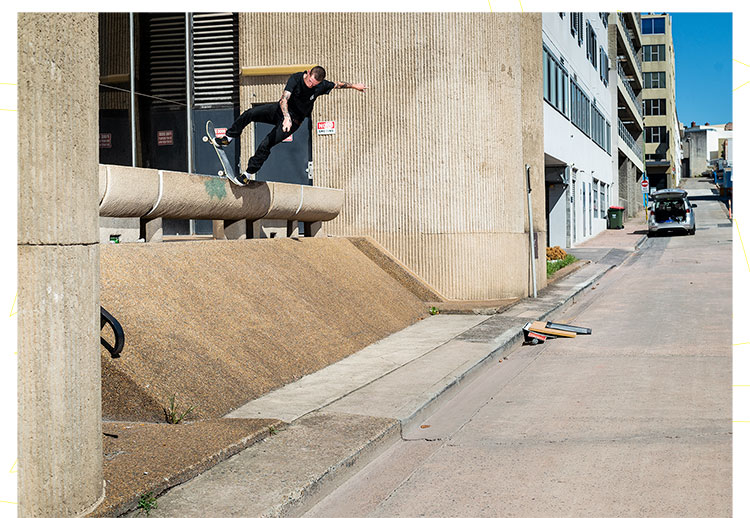 Figs told me Spider is the best blunter he ever seen. How urban can you get? Back-streets blunts 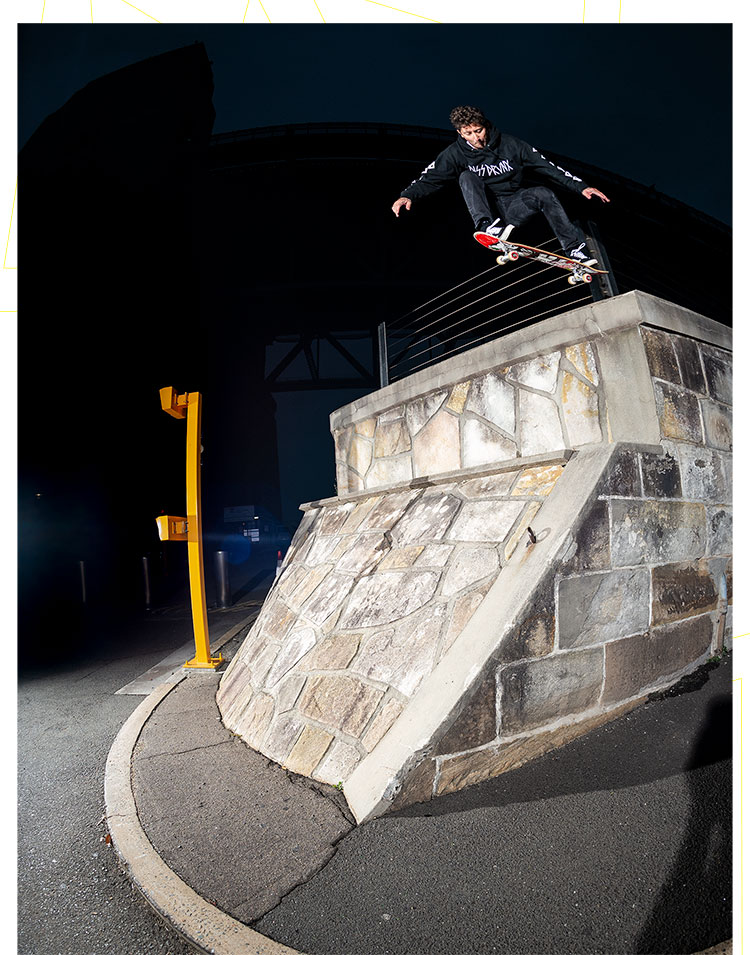 When he’s not at Shakey’s or having a grit, D Dollin can surprise you. Simple stuff, ollie into slate wall

HUMAN JERKY
“Double Scabba Slabba” is what we were greeted with one morning by Grant Nawsty himself, emptying the melted ice of our previous days mission, seeping deep into the fully-flooded trunk of our trusty ship. By the end of each day the back of our rental van would be completely flooded with stagnant water from our broken cooler, which Dustin destroyed on the very first day of the trip. With a mixture of different colored wood veneers from our boards slowing bleeding into the liquid, it turned into a discolored body of water referred to as “The Blue Lagoon.” With Evan finding heaven in every sip, splashing his face, washing away the blood, sweat and beers from his battered body from the day before, this turned into his daily morning shower—a pre-session ritual. We later found out that late-night activities turned into early-morning escapades with Evan voluntarily eating others’ scabs for slabs. 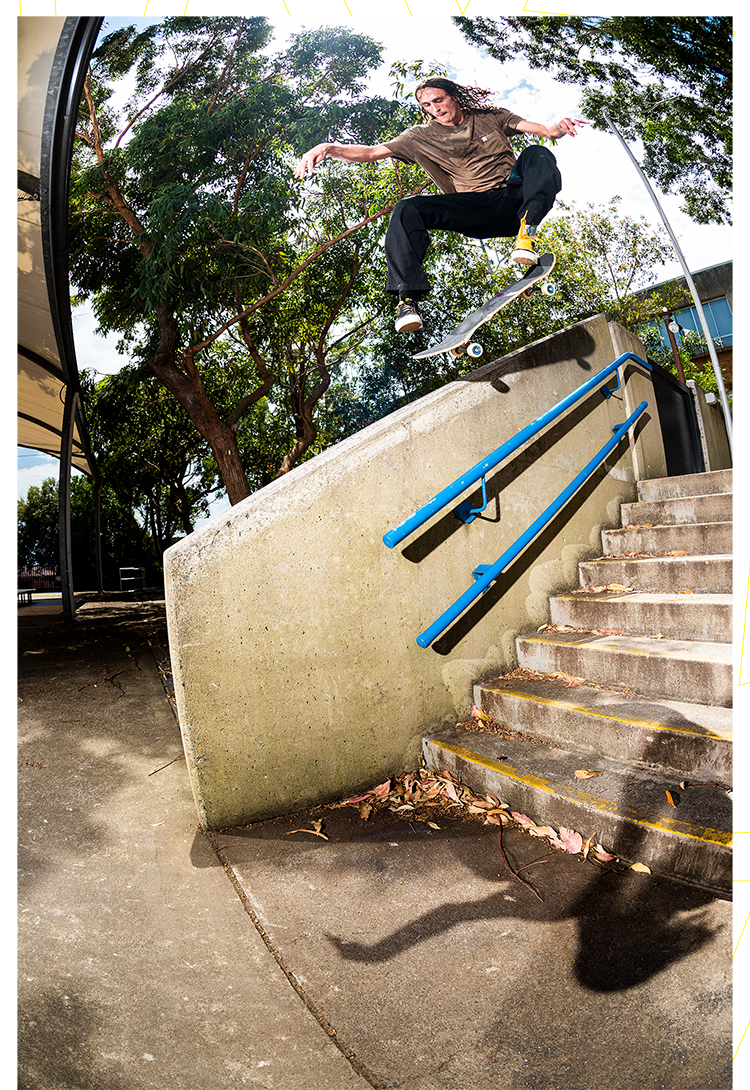 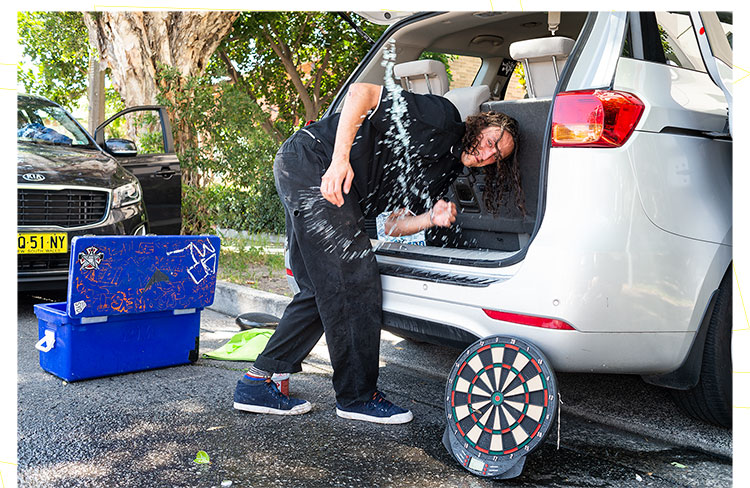 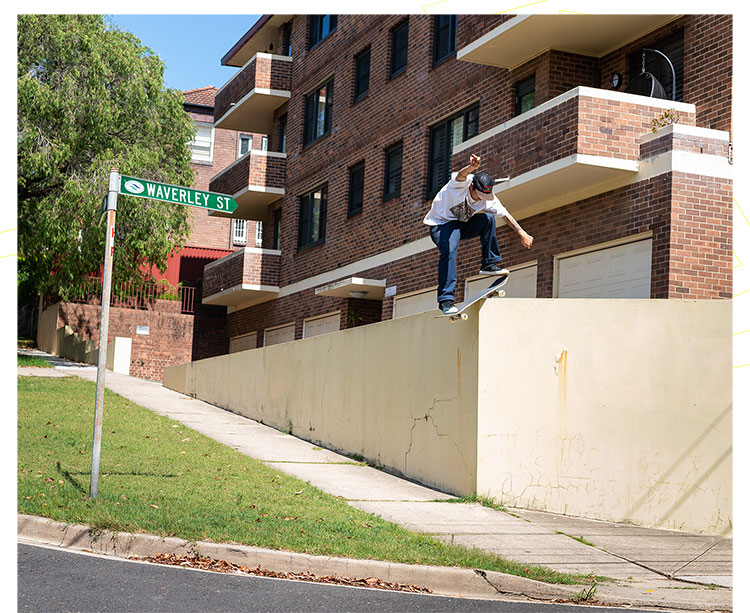 This lipslide was usual shit for Milton. Not a boardslide transfer, a burley long-ass graphic scratcher… in a line...

For those of you who have never had the privilege of visiting Australia, a slab is a flat case of beer in stubby bottles. Evan was ripping and tearing oozing, blood-hardened beef-jerky-looking strips off the crew’s skin and fully chomping them down for free beer. Twenty-four bottles for eating just one scab? This ain’t no King of the Road—no points, no problem! Evan, aka REVin, aka REVington soon turned into a scab aficionado, stocking the cooler full of cold ones for the boys upon every pit stop, slipping safety brews in his back pocket (RIP P-Stone) and letting the good times roll on and on again. Pretty sure Dustin still owes him eight slabs, though. Pay up, sucka, nobody rides for free. 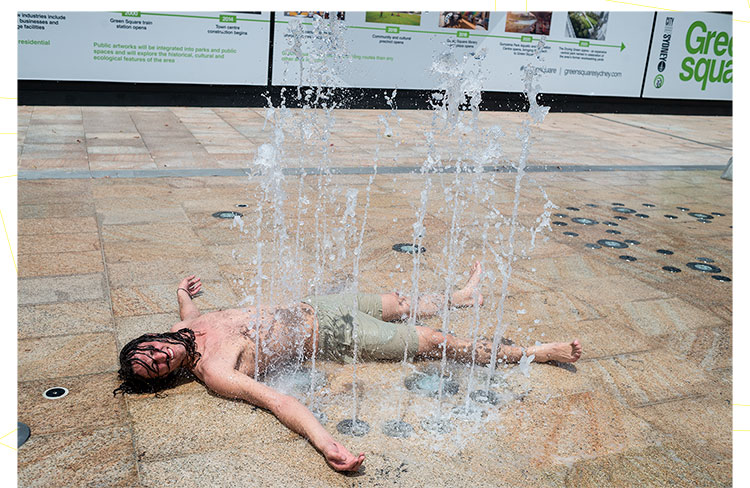 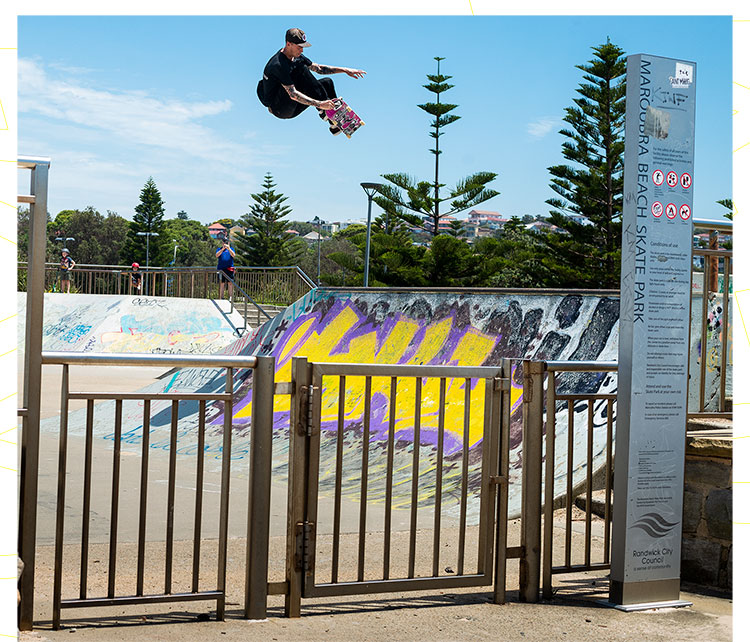 This photo explains the future. Stunt squirts running for cover when they seen Spider alley the fuck out this ooped lien

BRING IT; DON’T SING IT
After a few days in Sydney we set our sights on Canberra for a day trip. With local and loyal Bogans Cody Riley and Jack O’Grady as our tour guides, we knew we’d find some gems. Three-and-a-half hours and one speeding ticket later, we found ourselves at the famous Cardiel brick banks. After Jackson pounded himself to a pulp in the blistering heat (ultimately rolling away victoriously), the fuse was lit for what would be an unforgettable day in the bush. We took it over to the shaded concrete U-Pipe to witness the Grant and Pedro show. They put on one hell of a clinic with endless lines and unlimited airtime. Next spot! We packed the cooler full of brews and moved the party to the bottom of a 15-stair rail. Pedro was first to step to it, followed by Figgy and then Milton. With Jake yelling, “Bring it; don’t sing it!” a chain reaction occurred. Five tricks in ten minutes? C’mon, Tom! Clean, done, sold and back to the van to roll one up. Canberra got crushed. 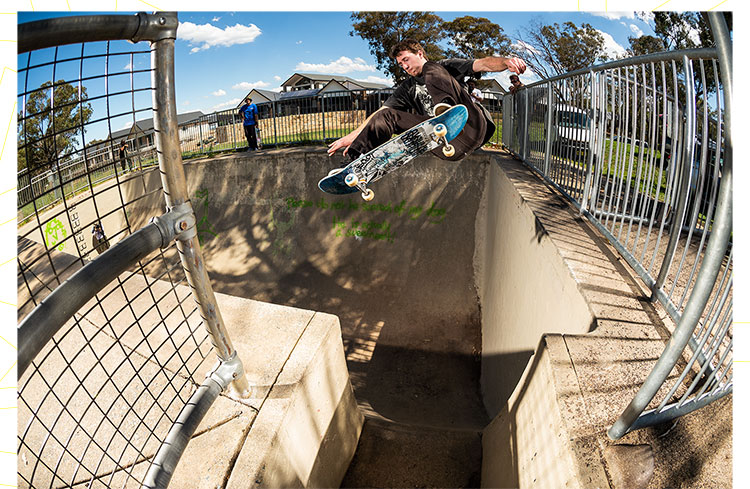 He did this ollie eight years ago but the photo got fucked up. Kambah U-pipe channel ollie? He did it again. Shocker 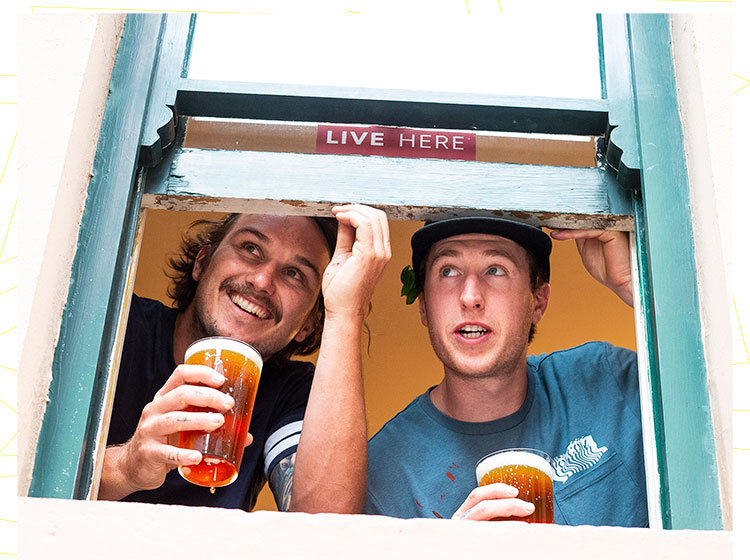 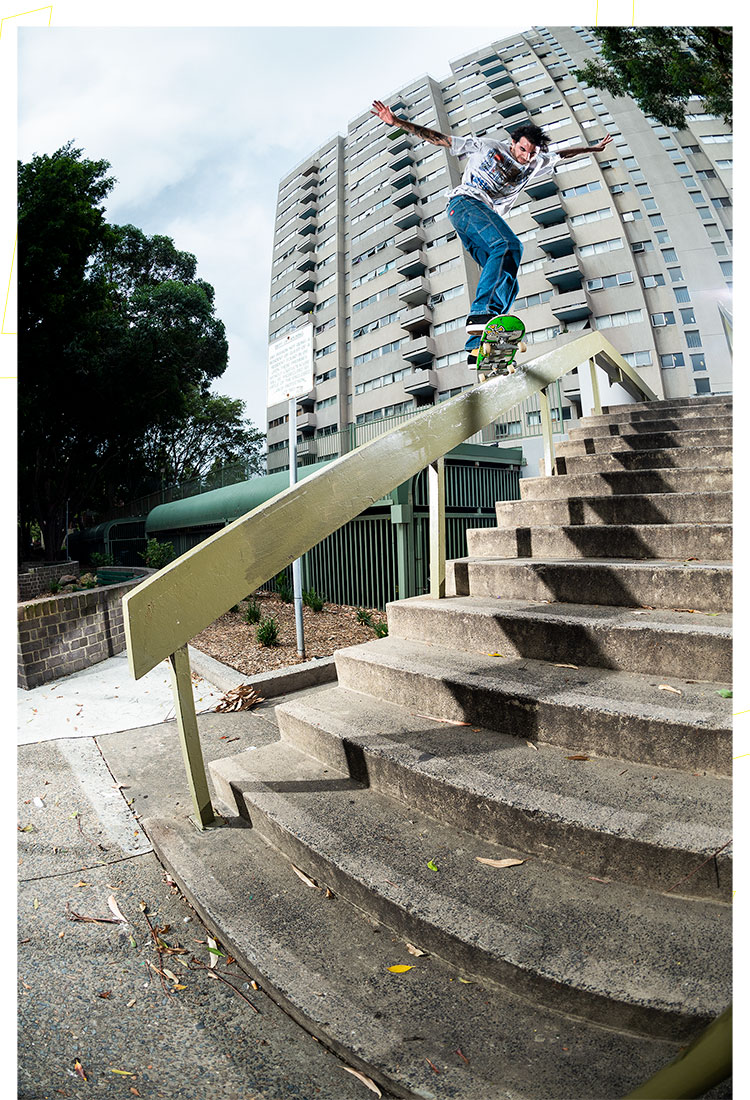 The name Suicide Towers comes from fools jumping off the building. Figs, stand-back Suski. Back and bad 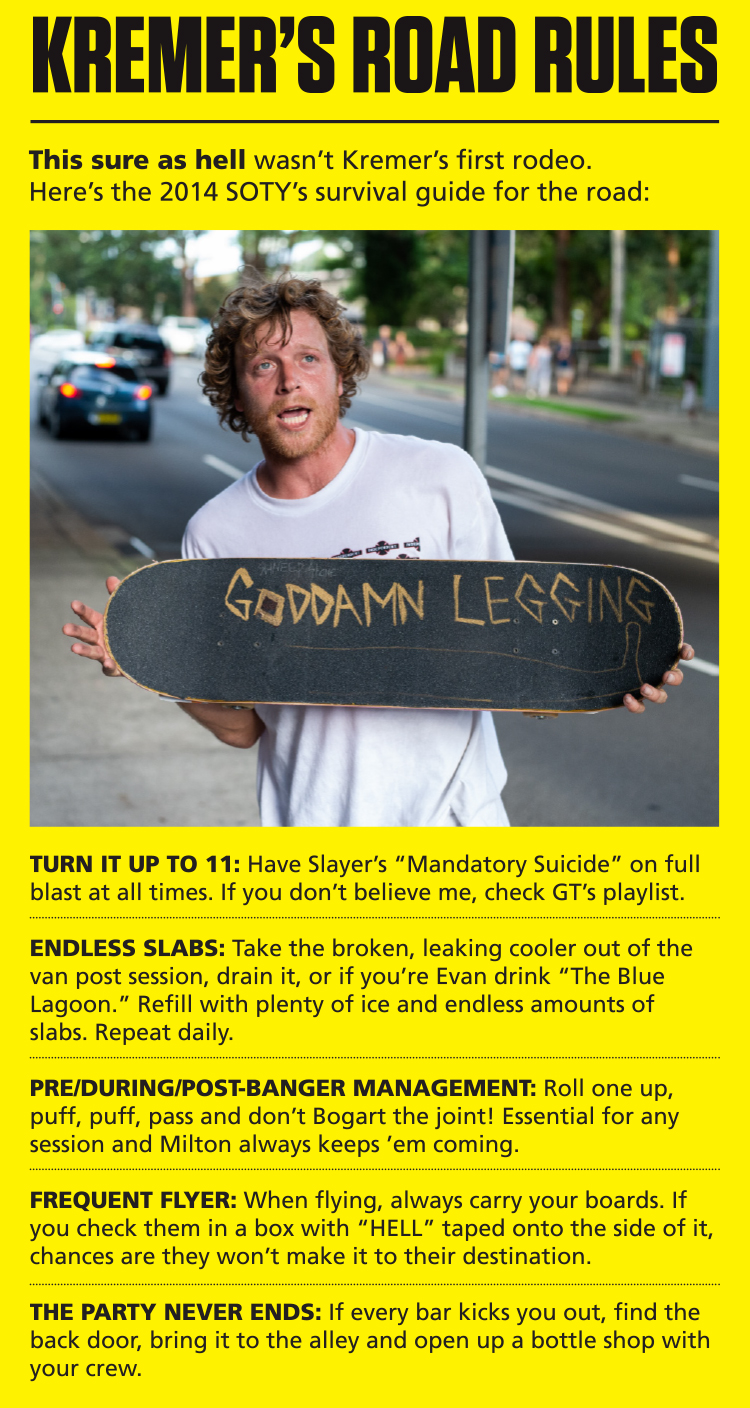 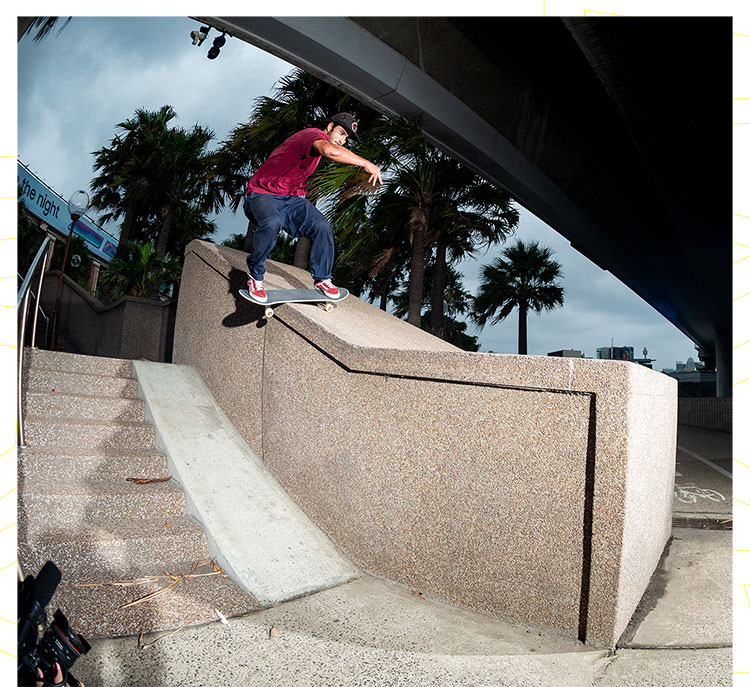 Gritty lipslide to fakie by Delfino. His slams before the make were Circus Vargas 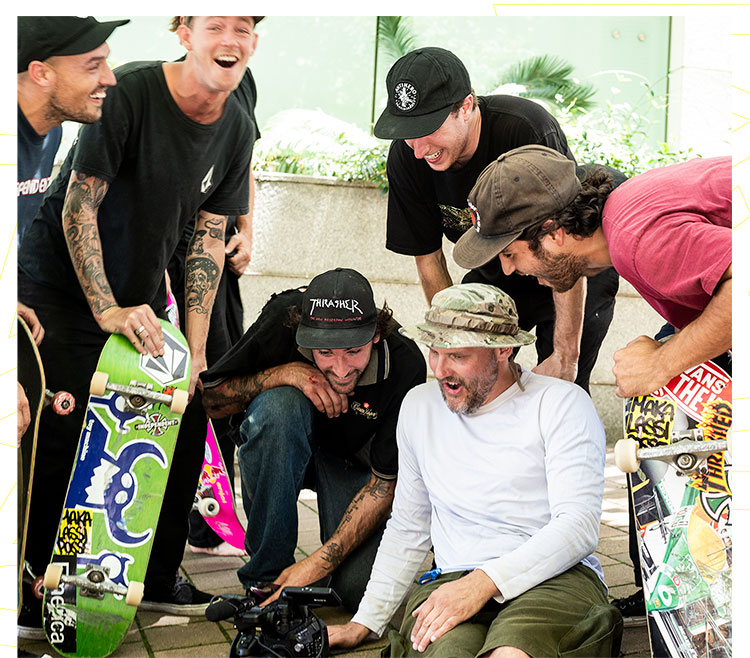 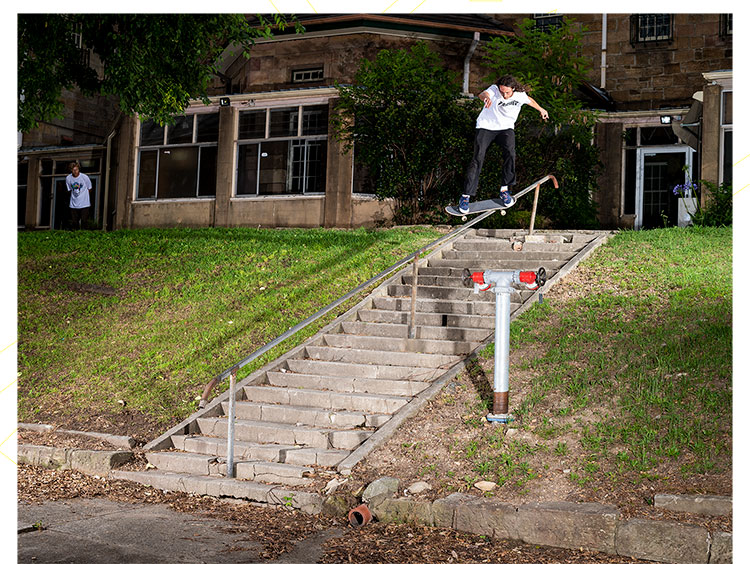 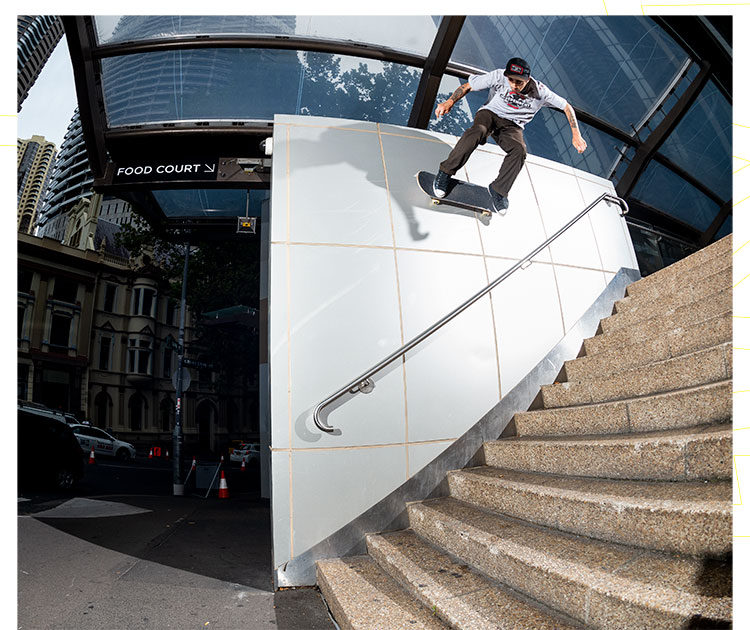 Think you could call this trick a Milton? Out, over, down

MM MVP
Unless you’ve been living under a rock, you’re not on social media or you’re dead, then you’re no doubt familiar with the name Milton Martinez. This was the first trip to Australia for the little man behind the enormous spliff cloud, and holy hell he killed it—kicking ass, taking names and straight slaughtering every spot we hit. Hailing from the Atlantic Coast of Mar Del Plata, Argentina, Milton is a simple, quiet man, clearly letting his skateboarding do the talking. With only two words being occasionally muttered under his breath: “Smokes,” and “Sketchy,” I’d find Milton either rolling the biggest banger in existence (smoking it completely by himself) or passed the fuck out in the back of the van, no doubt dreaming of pure speed and annihilation. By the end of the trip it was a unanimous decision that Milton was our MVP. The 2019 SOTY race may have just started but he’s already off to the races. You already got our votes in the bag, Smoookes! 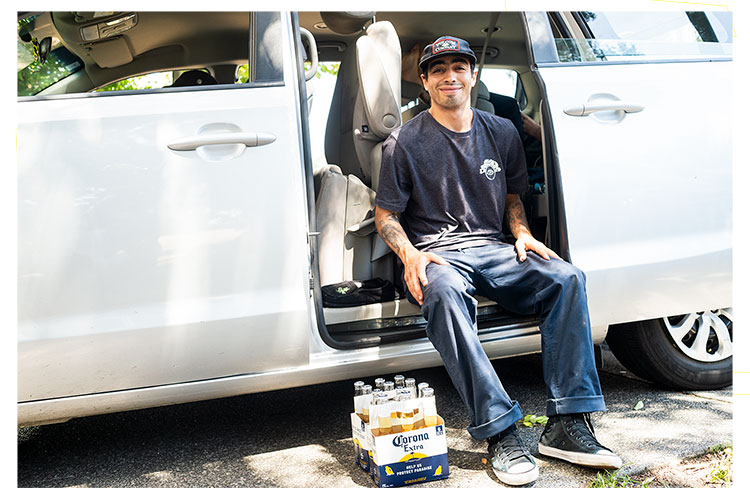 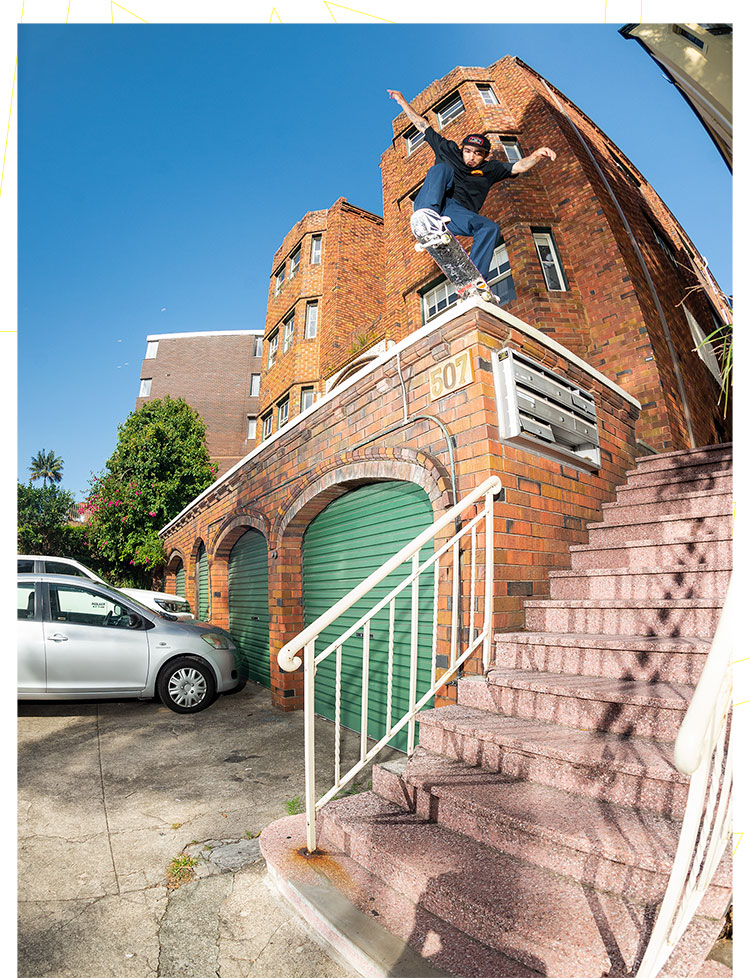 Milton M straight don’t care about your feelings. No, he did not grind the white rail, back 50-50 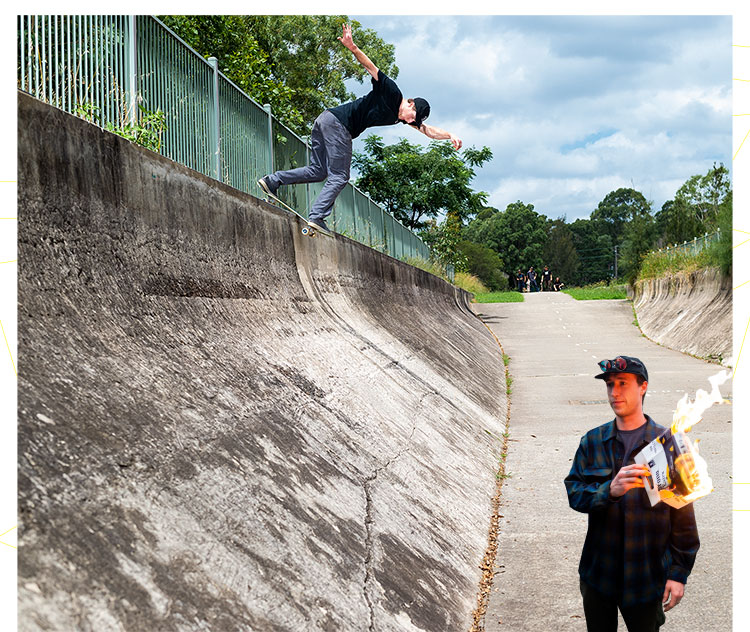 This bike path had no fun this day. Jeets back lippin’ the big shit. Power carve to showtime 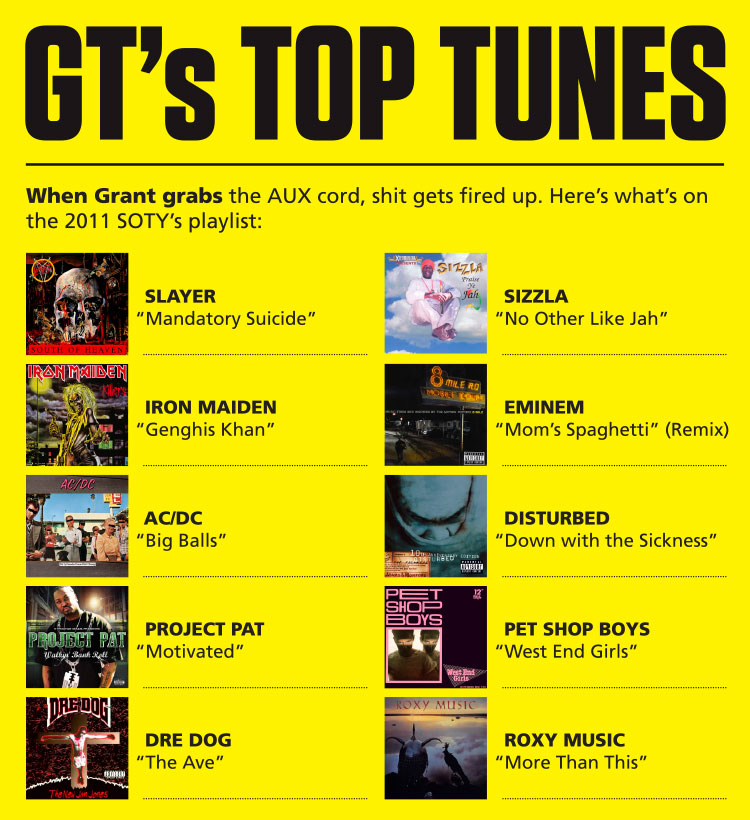 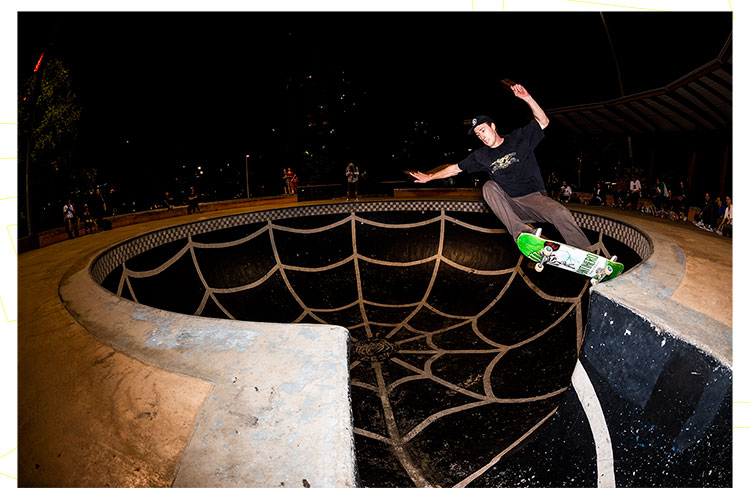 Ever seen Grant grind some bowled curves? Well if you ain’t, he gets speed from axles on ‘crete. 5-0 to channel O? Seen it

A few things happened on this trip but let’s talk about the second night. I’ve seen you run down but you were fucked.
My immune system is just shot. The second day I got a fever and was puking all night. I couldn’t keep anything down. I figured my immune system just crumbled. When I went to the hospital they said there was an outbreak of spinal meningitis.

What did they do for you?
At first a CAT scan and other tests. Then after eight hours of being there and getting tested for shit, they pulled out a needle and were trying to give me a spinal tap.

Did you see the needle?
Yeah, it was like a foot long. It looked like the needle they give a horse when they need an antibiotic shot. I feel like if they aim proper and hit your spine first you might be alright in a few days, but from what I heard if they miss your spine, that’s what takes you out. 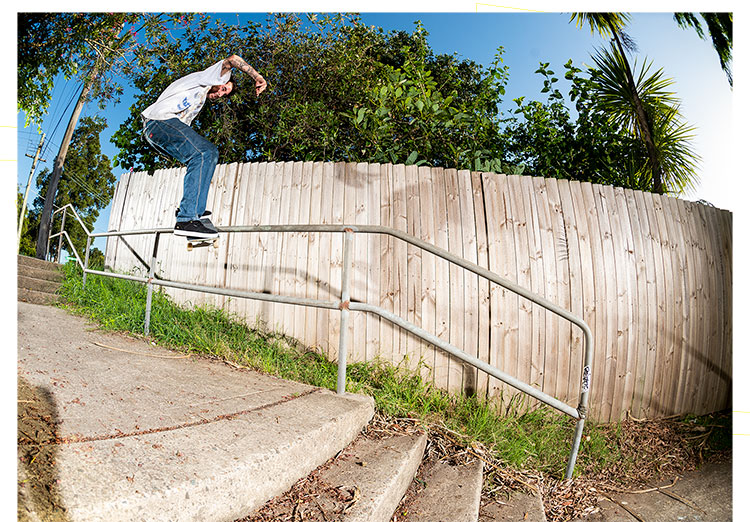 Gots to be hauling ass to go the distance on the Smithers. Figs, bang bang

I would have denied the needle too.
They said there was an outbreak and it’s all up in your brain. If you don’t take care of it you can die. I just didn’t think I had it. All the other tests came back okay so I just pulled the trigger and left the hospital. I figured if I was fucked in three days I would go back.

You took one day off and hung out in the hotel, then you were back in the van. You seemed to be feeling better.
Yeah, I was doing better until I borrowed Gavin’s board to bomb that hill. I saw everyone pushing into it. I never really looked at it and halfway down I realized it was too late and got the speed wobbles and took it to the shoulder. I picked up speed on the side of my head and on my shoulder, sliding about 30 feet.

Did you lose some tattoos in the process?
I did but I put a good one in its place—I got P-Stone’s cartoon portrait right next to the scab so it looks like he is eating it. I couldn’t believe I took such a burly slam on something so retarded. Rule 101: don’t bomb a hill on someone else’s board. 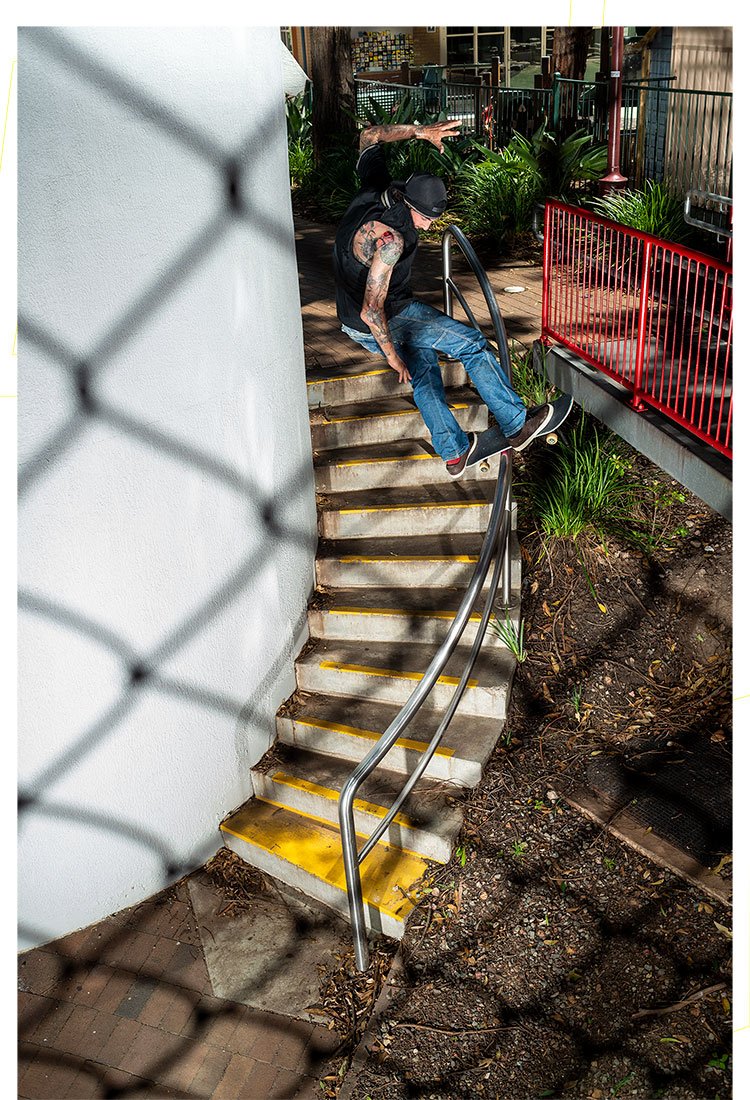 Figgy had a long day—hill-bomb crash to curved front board head bounce. You gots to pay in blood

Then right after that, over at the curved rail, you got smoked again.
Yeah, at the next spot I was still pissed off about the hill bomb slam. I hit my head on the rail which was perfectly in your way when you fall. It wasn’t too bad, just leaking a lot. It was a train wreck, one thing after another.

You’re a legend for getting back up and putting down the front board.
I was kind of sore but not impact sore—more just from all the scabs on my body. I was just sticking to everything. It was just unbearable trying to skate like that.

Did Evan help you pick some of the scabs?
Yeah, he was throwing the scabs back and I had to keep buying him beers. Scabs for slabs! 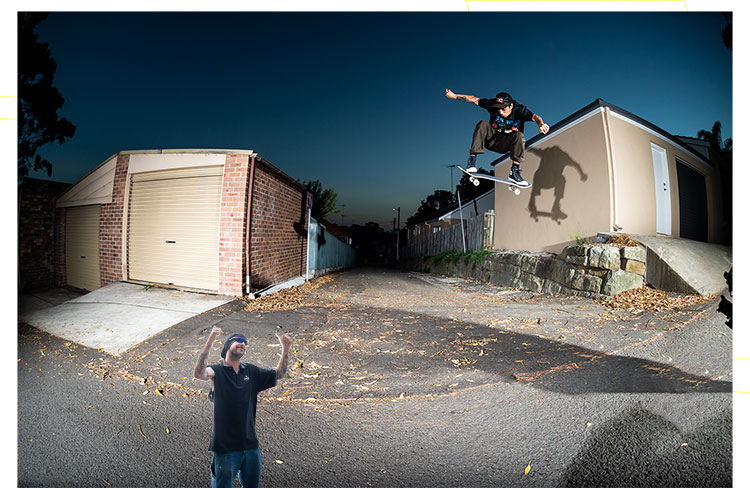 This shit was first day. You jump streets? Not this big. Mar Del Plata born and bred, Milton told me last year, “Let’s go to Australia.” He was hyped

With Phelps fueling the fire, we killed slabs, watched Evan eat scabs and left a trail of broken bottles as we shredded through Australia. No instruction, just pure destruction, and we damn sure followed Jake’s instructions to make it right. Thirteen-thousand miles from home and you’re sharing the same passion with the locals that continues to bring us all together: skateboarding and good times, plain and simple. Sticking together like a band of brothers for one Hell of a Ride, we’re built to grind and if you’re not riding them—get the fuck out. ’Til next time, thank you and we love you, Sydney. Deuces! 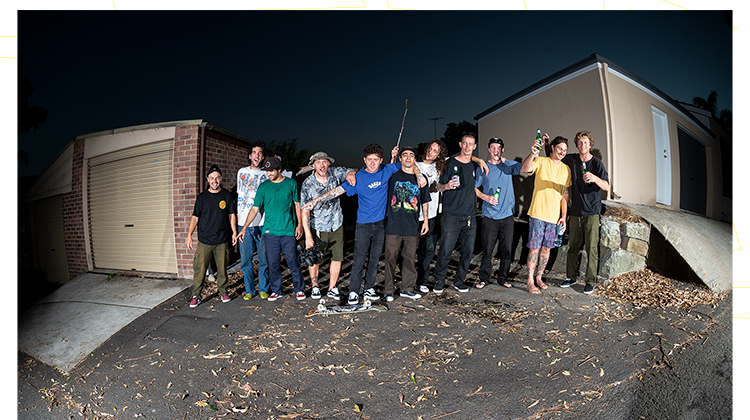