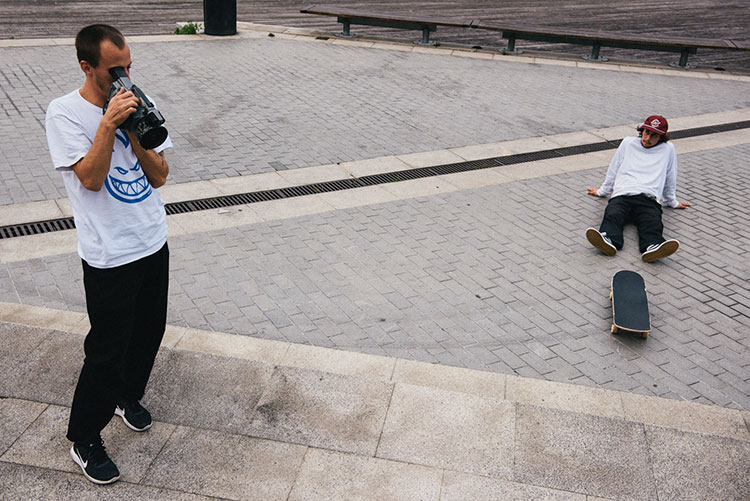 The dynamic duo, Phil and Jarne feed off each other like nobody else

While videos coming out of Belgium throughout the years have always been good, for some reason Jacky really struck a chord. It probably had to do with the amount of familiar faces. The faces you’d see at the skateparks on Saturdays or faces you’d see at events—people you’d known for over a decade. In 2016, these faces had matured in their skateboarding and were confident in the way they wanted to be portrayed. Add some fresh blood to the mix and the first Jacky video was something magical. “Jarne and friends” would describe it best, but would also sell it short at the same time. The music, the black-and-white footage and, of course, the skateboarding all brought something to the table. It was a skate video with European and worldly sensibilities that never lost its Belgian identity—not even for one second. 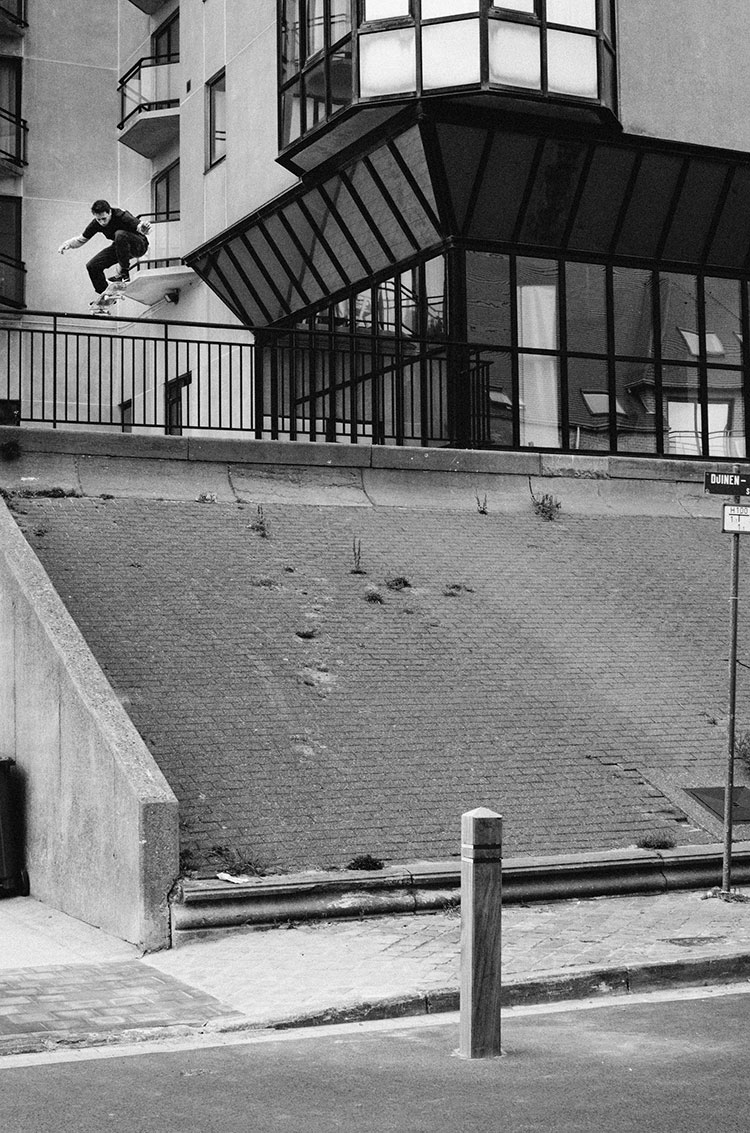 Jarne drops in on some of Oostende’s finest real estate 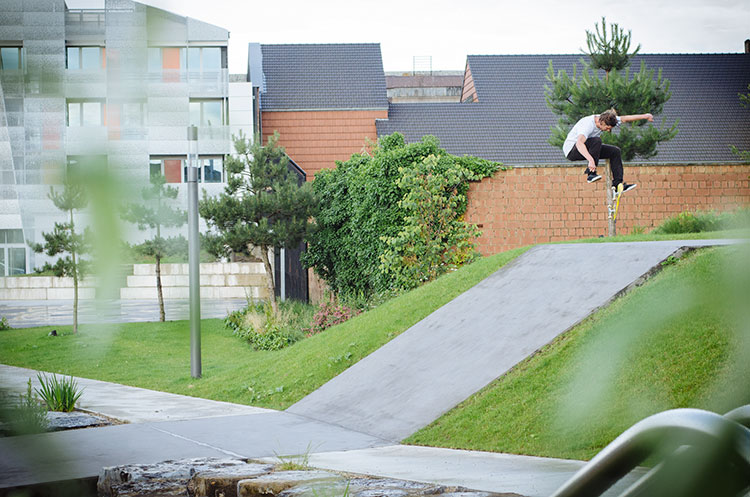 Bram De Cleen likes to call out a timeframe when trying a trick: “I’m going to give my self 35 minutes.” Fakie tré flip, right before the buzzer 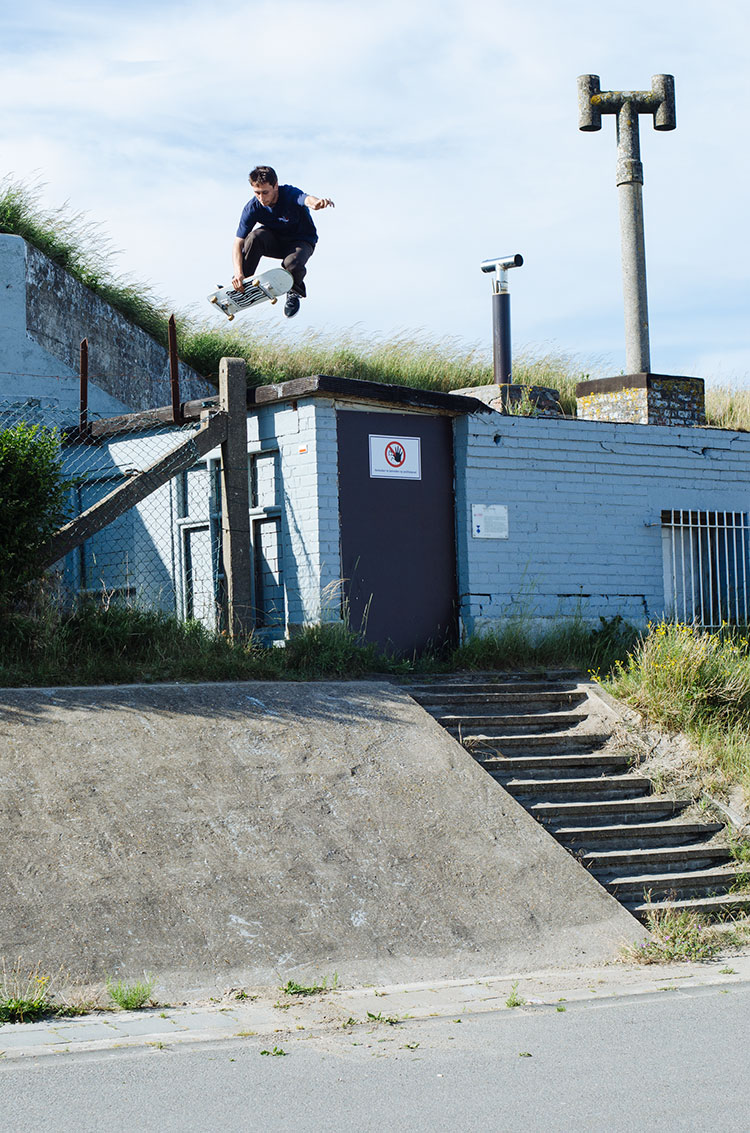 An old friend showed us around Oostende for an afternoon, only showing us the crustiest spots, places he wanted to see people skate. Jarne Verbruggen obliged him, boneless of the roof

And was there talk for a second one? Apparently so, and I couldn't wait to get on the road with some old friends. Phil Zwijsen might be the most motivated skateboarder and videographer I’ve ever met. He organized all three of the trips, including the budgets, lodging and transportation. Not a lot axelof people could do it like him without ever losing steam. He even drove most of the time. 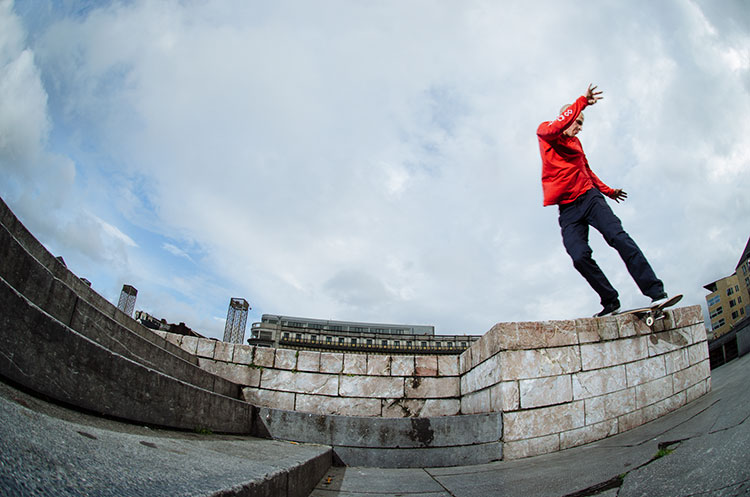 Valentin Bauer, gap to back lip in Liege while the city celebrated the national team’s victory in the Euro Cup. Go Belgium! 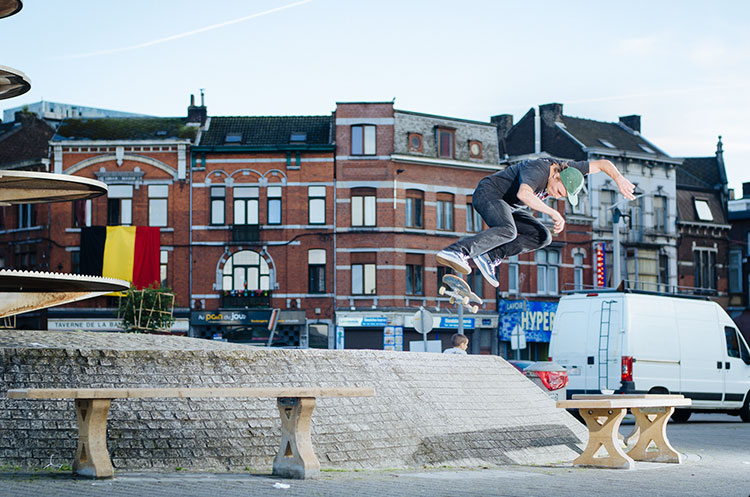 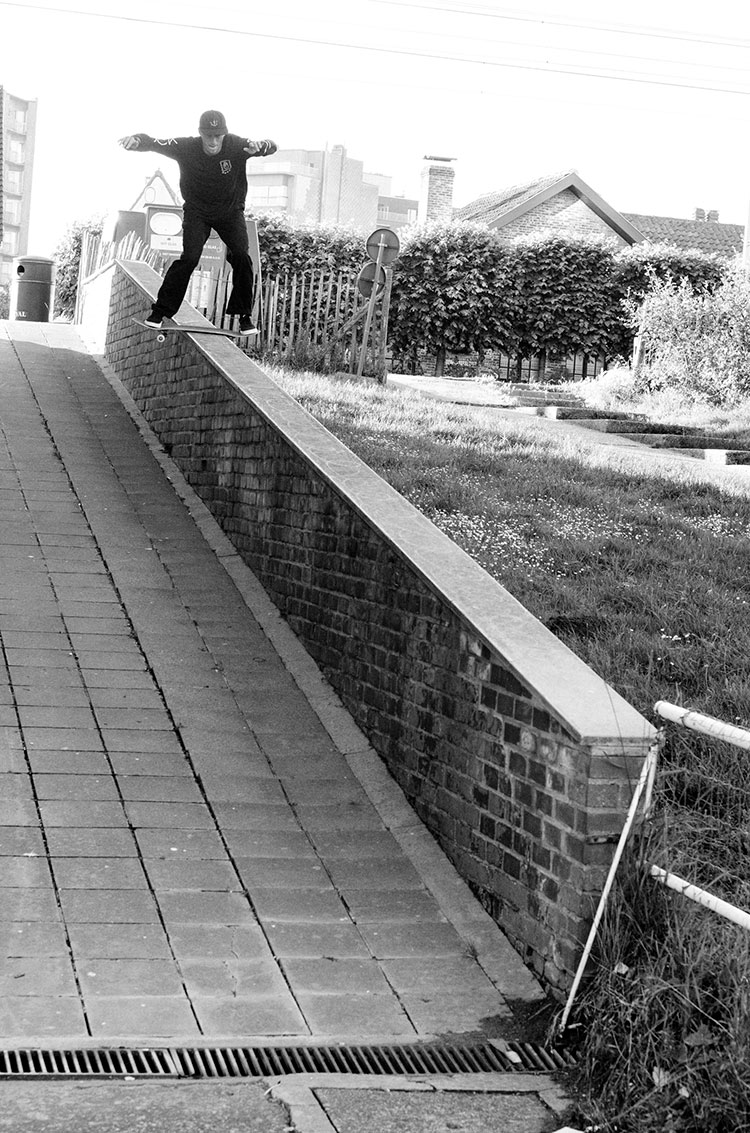 The man himself, Phil Zwijsen, lipsliding another crusty one in Oostende 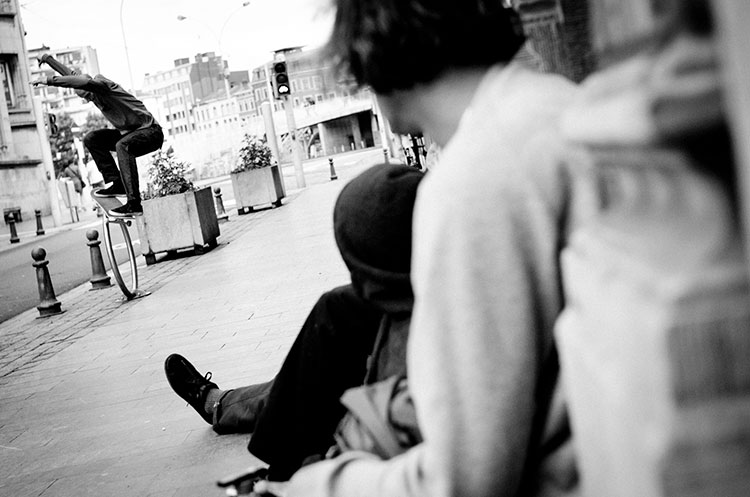 Our first trip was to… Belgium. Home-field advantage. While I cursed a good amount while we were hiding out, sheltering from the rain, it was simply perfect. The south of Belgium just looks better covered in the gloom of a rain shower and we truly made it work. From Seraing to Charleroi to Liege to Ostend, we went in without a plan and the freestyling paid off. 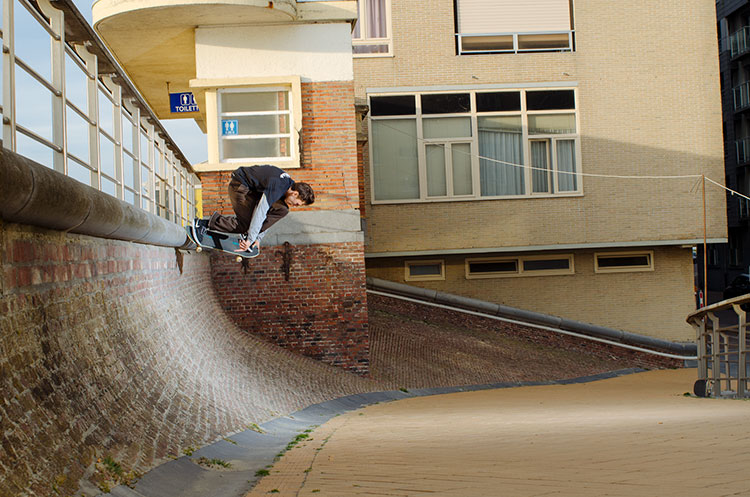 This thing has been around since the dawn of time but never really got too much love. It took this trip for people to really hit it for some reason. Jarne, backside tail tap 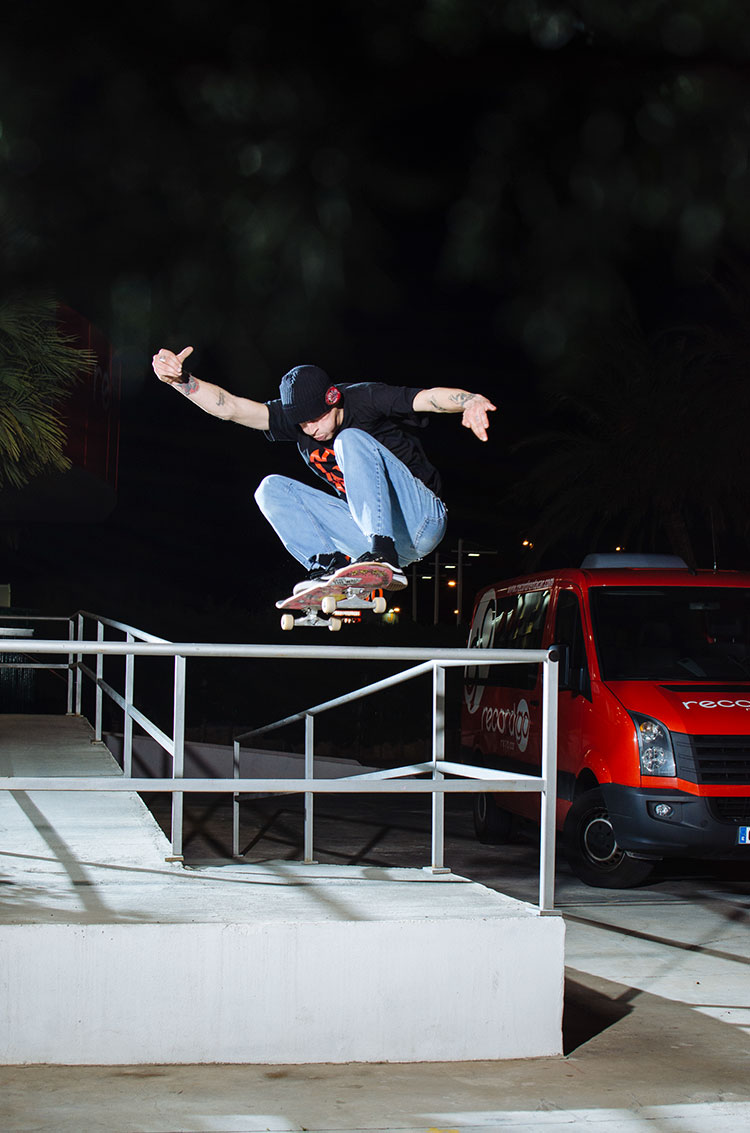 Valentin Bauer spotted this one in total darkness. Big snaps! 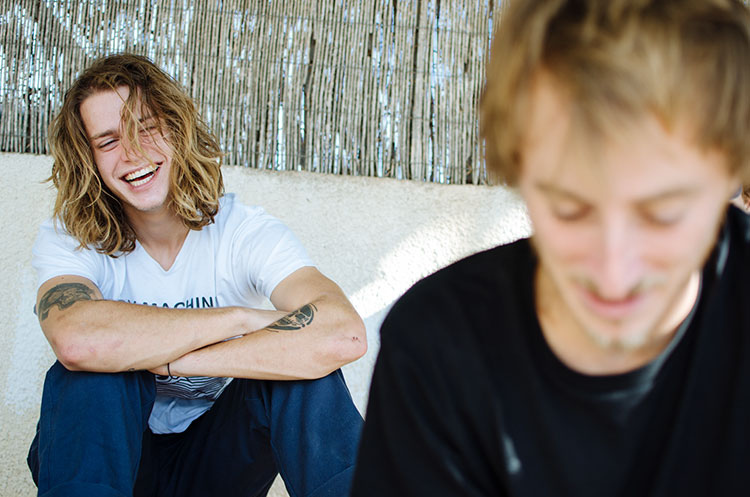 In Ostend, we met up with Bruno Van Wilderoode, who with a contagious energy showed us all his “spots,” which were just the gnarliest, crustiest places that he wanted to see people actually skate. Phil’s lipslide and Jarne’s boneless off the roof are direct results of Bruno showing us around. Liege brought us quite the energy as well. The Belgian national team had just qualified for the first round of the World Cup and the whole town was buzzing. Black, yellow and red was everywhere—hours and hours of cars driving in circles around the plaza, honking their horns. In the the eye of the football hurricane, Valentin Bauer skated a chaotic gap to ledge. Did he lose his cool? Not quite. Cool as cucumber, he landed his gap to back lip. That one was for Belgium! 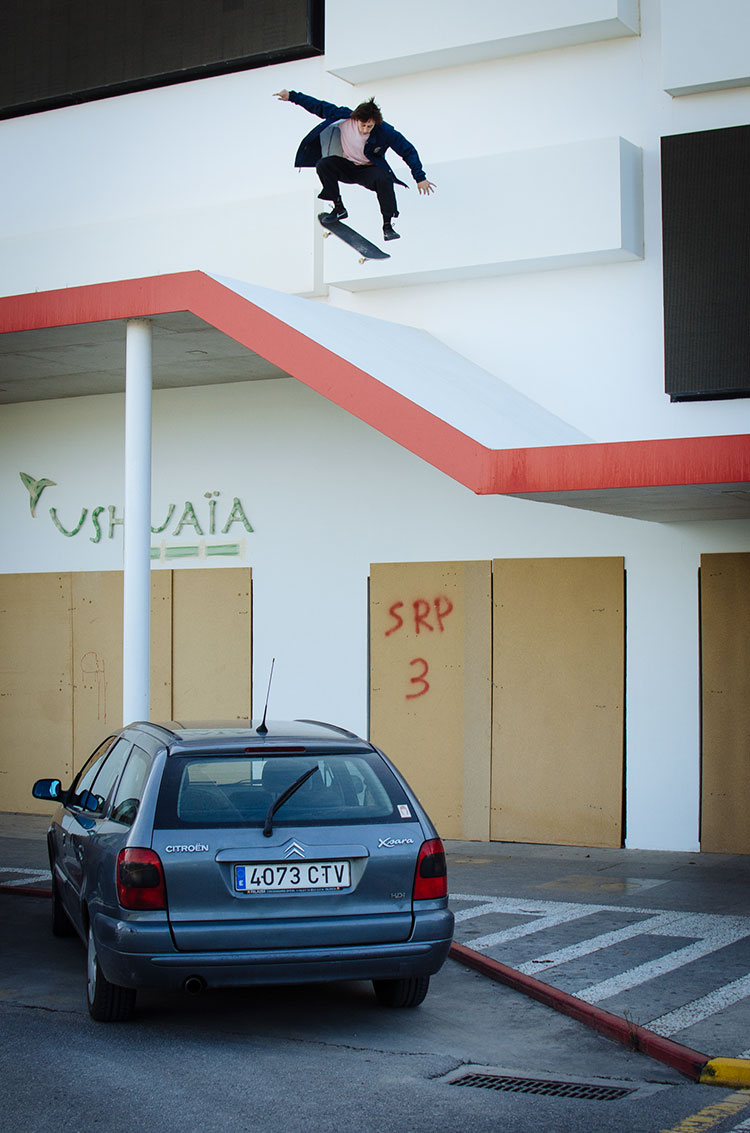 Ushaia is one of Ibiza’s largest night clubs. It completely closes down in winter but, needless to say, people weren't too hyped on Jarne skating the roof 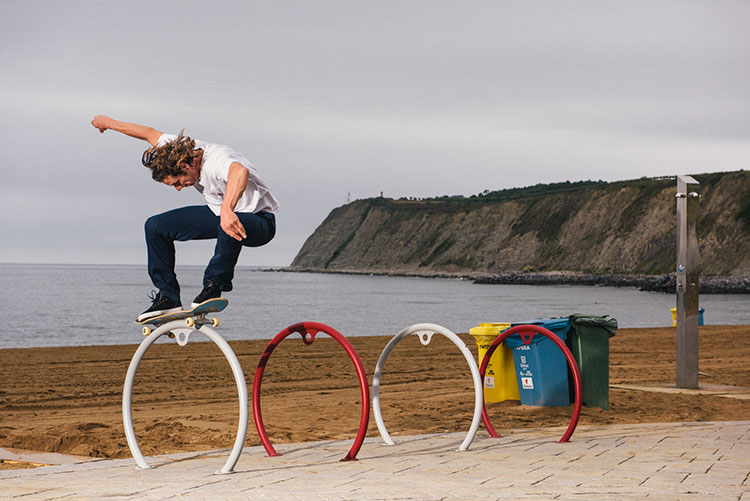 La Kantera is a magical place and has a lot of personal history for everyone in the crew. Bram De Cleen, switch slappy grinder 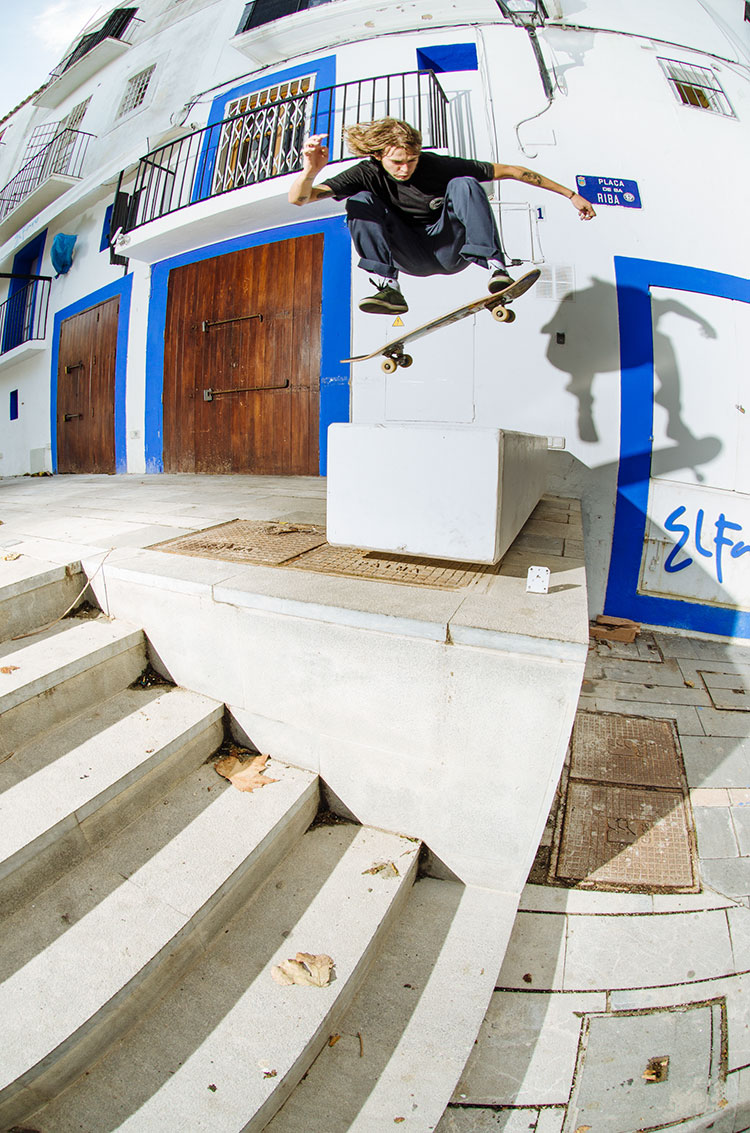 Usually skateboarding happens in crusty alleys. Axel's pop shove it was done in one of the most scenic little streets ever. Hit me up for the pin if you don't believe me

Phil brought up Ibiza as our second trip. I had never seen any coverage and the vacation vibe seemed like a fun change from the cold motherland. Just like a ski resort in summer, Ibiza pretty much closes down in wintertime. Imagine all the drunken tourists you’d have to navigate while trying to skate a spot there in the summer. Sounds miserable, right? Due to being completely shut down, we got to skate some really cool stuff. Climb up a roof? Sure. Skate a hotel patio. Why not? Neighborhood after neighborhood, everything was completely desolated. The only downside was that we had a hard time finding stuff to do at night, which for the homebodies wasn't much of a problem. But the part of the crew trying to get their BAC up was forced to visit a weird goth club. 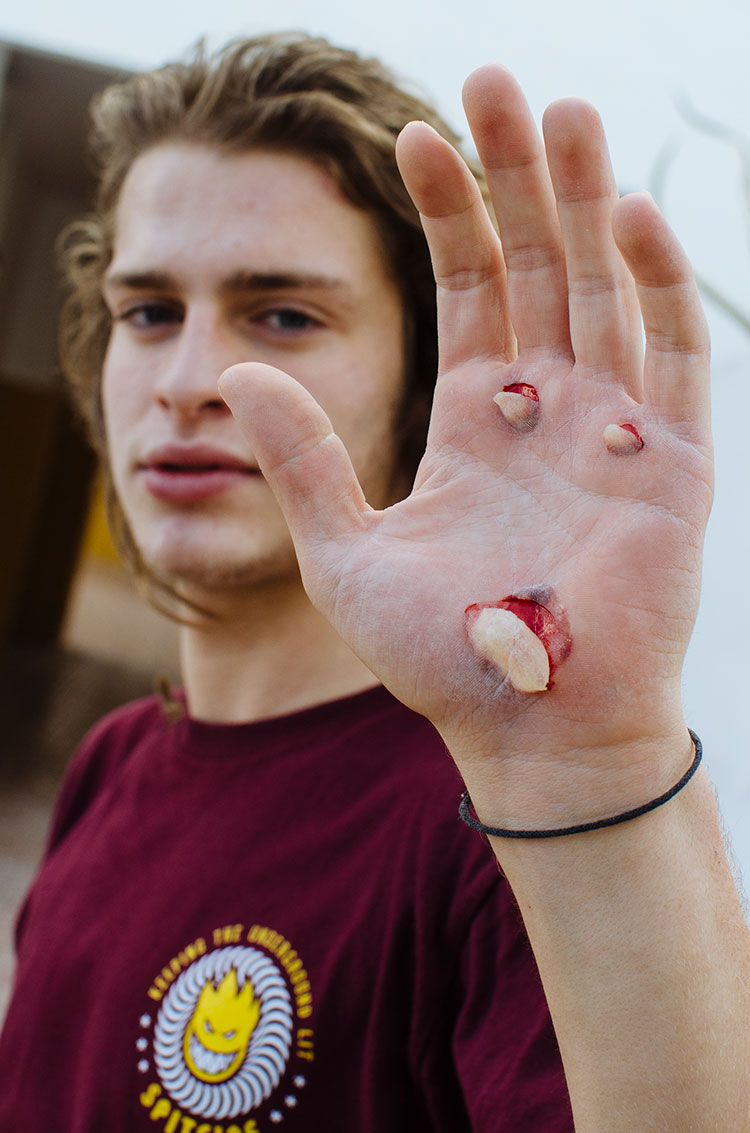 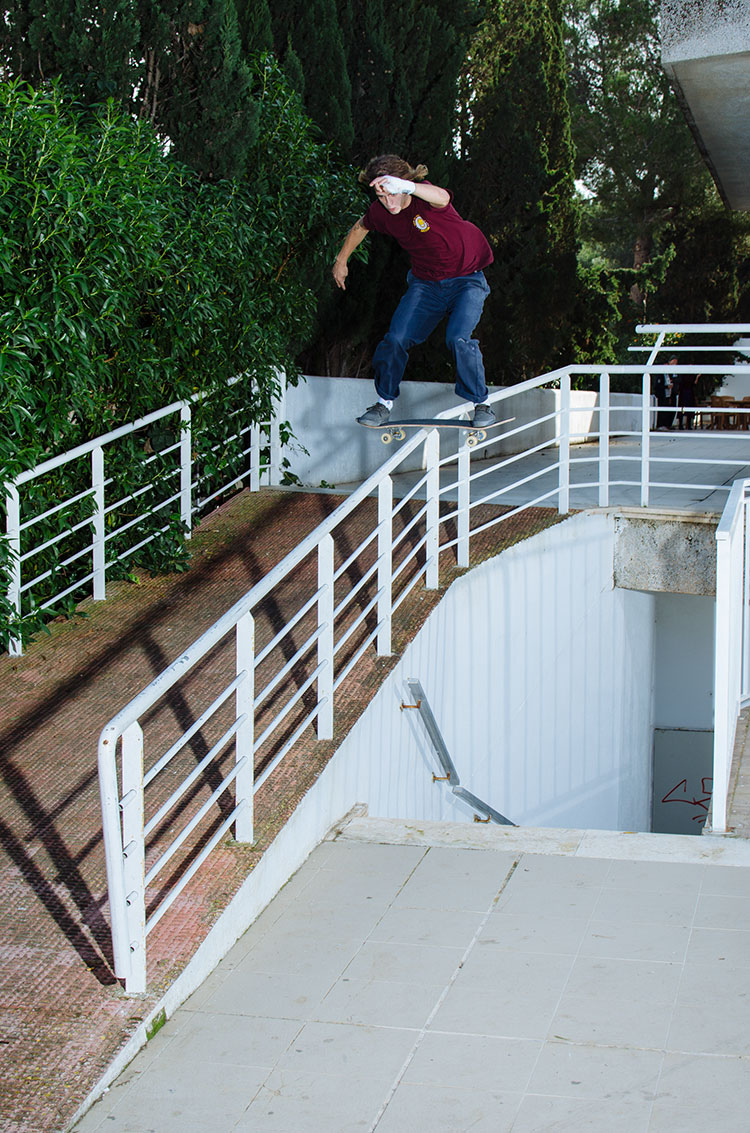 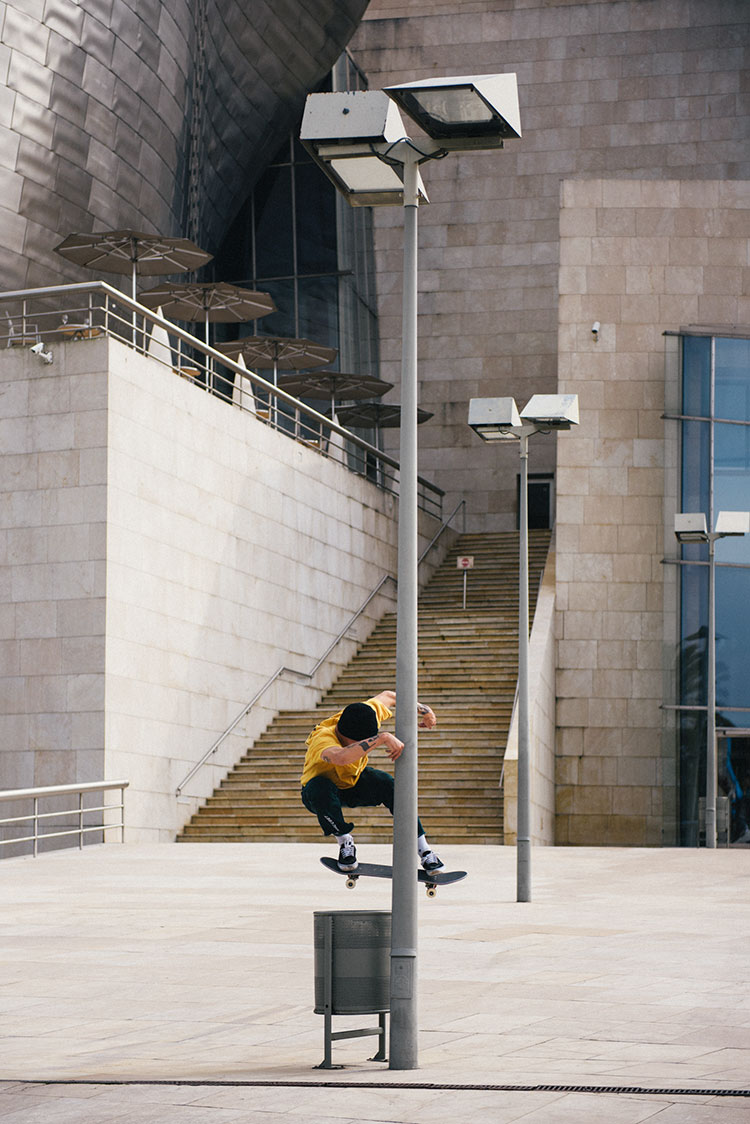 The Guggenheim Museum is one of Bilboa’s main attractions. I made Valentin back 180 this can a bunch of times until there wasn’t a single tourist in the shot. Thanks, Val!

We had one final trip planned, the grand finale. We had talked about some of the islands around Greece—get even cuttier than Ibiza. Some options were researched but we voted against it as the refugee crisis had ramped up to about an 11 and it just didn't feel right. Phil lives about two hours from Bilbao. The crew had been there before and it seemed an easy one to organize. I flew in a day early, did some jet-lagged sightseeing and reunited with everyone at the Airbnb the following day. We really canvassed the city. We ended up in the cuttiest little alleys, the fanciest neighborhoods and the grimiest plazas. Weaving through neighborhoods, I kept thinking that it really is the best way to feel out a city. When we needed some sort of familiarity we’d drive to Algorta, the little beach town home of La Kantera skatepark. 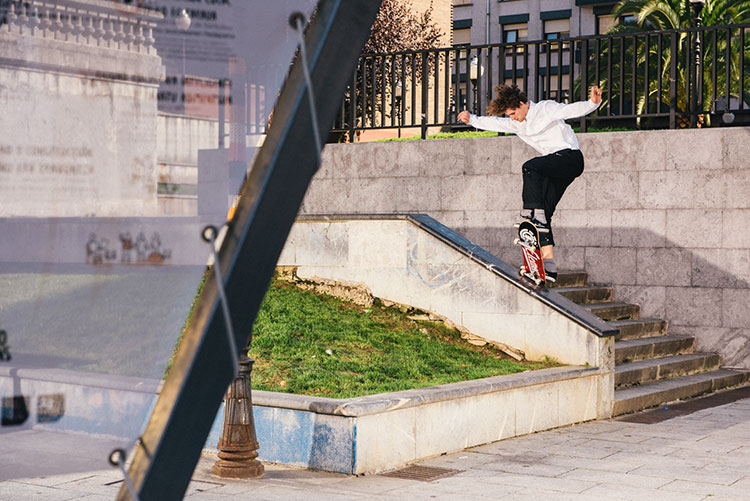 Jeff Jacobs is a a professional chef, so the caption writes itself: Jeff cooking up a frontside blunstslide deep in Bilbao. Bring the heat! 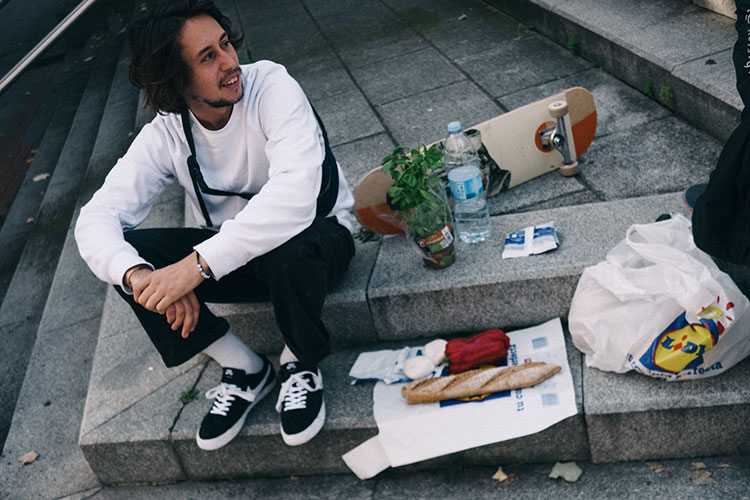 Jarne knows a thing or two about eating good in the streets. A Caprese sandwich beats fast food any day 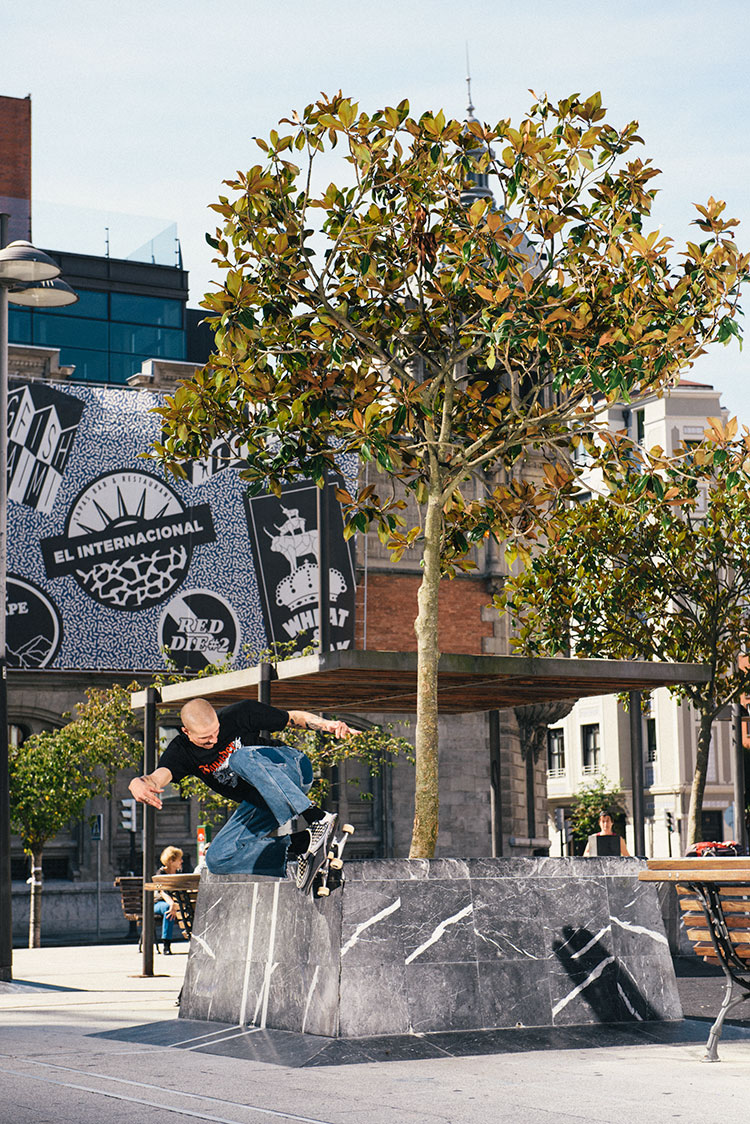 Val Bauer, wallride 5-0 in the heart of Bilbao

Exactly ten years ago we slept on that beach, hiding from the cops as they kicked out other campers. We drank Kalimotxo, as introduced to us by the locals and ate paella at a local food festival. And there we were ten years later, hiding out from the rain on the same beach. We all reminisced and agreed how incredible it was to be there once again, a decade later with old and new friends alike. Isn’t skateboarding the best? 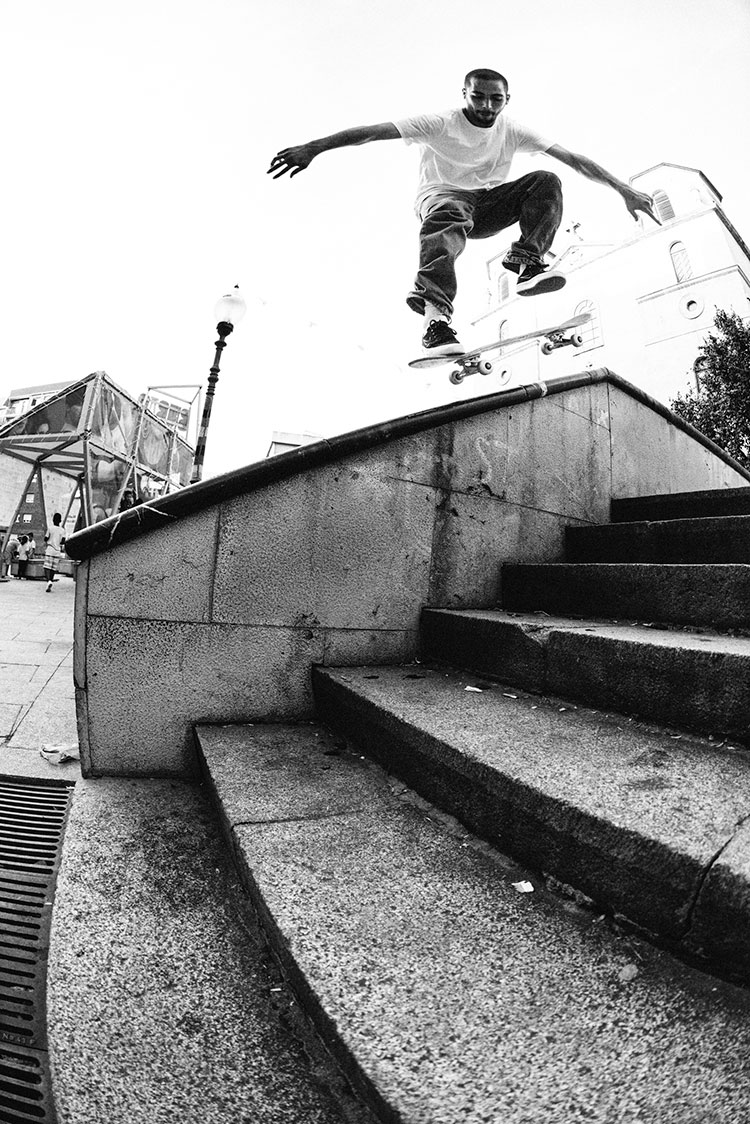 Last trick of the trip. We lounged hard at this spot! We hooked up the local kids with leftover product and got beers and sandwiches in return. Youness landed this nollie flip nosegrind and that was it. Zorched!