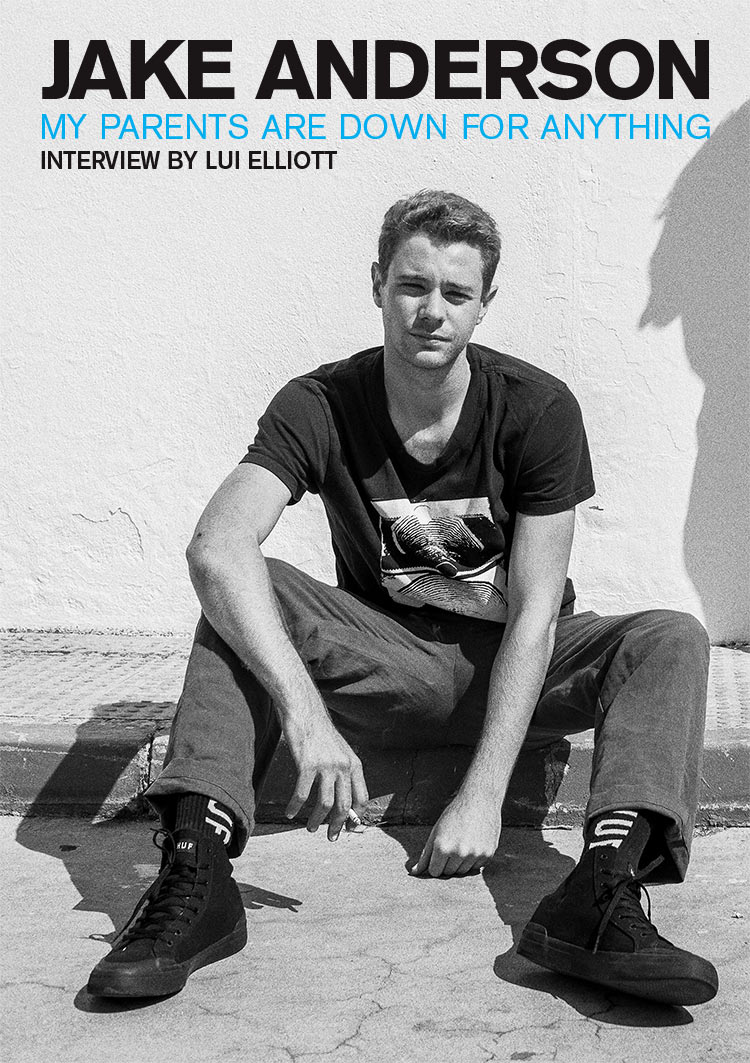 Skating is obviously in your family. Are your parents supportive of you pursuing a skateboarding career?
Absolutely. They watched it with my brother, Mike. He did good and is still doing good. Mike got brought up pretty fast, around when he was 17 or so. I was 18 and nothing was really going on for me. My mom told me that she didn’t want to stress me out but if I wanted to do this skate shit, I gotta do it or get a job. She didn’t want to see me throw all this shit away and have nothing happening. But yeah, they backed us 100 percent.

Do you think if Mike had not gone pro at an early age they would have been as supportive as they are with you?
I feel like they would have forced themselves to support me. Maybe not forced, but they would, for sure. They’re sick as fuck. My parents are down for anything. 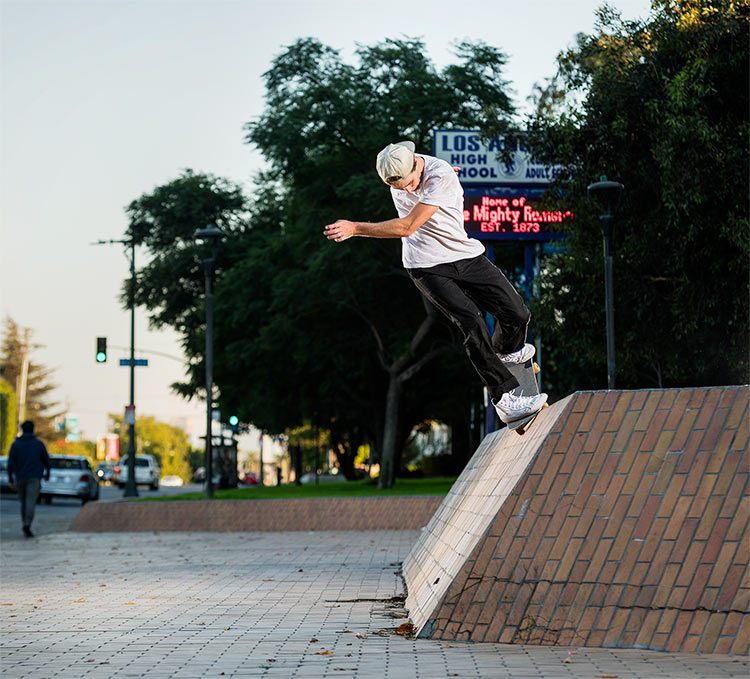 Did you ever feel like you were in his shadow?
Not really. Fuck it, if I’m going to be in anyone’s shadow, Mike isn’t a bad one to be in. My brother is a sick skateboarder, a sick fuckin’ dude. It’s a pointless personal fight. I could have that weighing on me but I have other things to worry about. 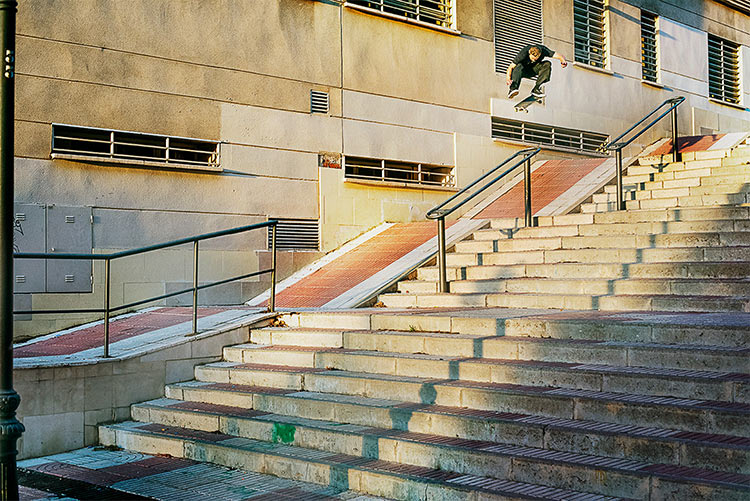 When did things start happening for you? How did you get on Skate Mental?
I was getting Huf shoes from the TM Tyler Cichy and they took me on a trip to San Francisco. That weekend, Plunkett met up a bunch to skate. By the end of the weekend, he hit up Brad to see if he wanted to send me boards, sent him my footage, then asked Tyler to see if I wanted Skate Mental boards. Within a couple months, we did the Road Hogs trip to Mount Rushmore. I barely knew anybody; the trip starts and I end up becoming friends with everybody. The whole time, Brad is giving me the cold shoulder. He was testing to see if I could withstand all the bullshit with him. One day Karsten asked, “When are we putting Jake on?” Brad said that he would just leave it up to him. It was the last day of the trip before we get to Mount Rushmore. We all just got hammered. We went to a store to get a bunch of Mike’s Hard Lemonade, gin and Jägermeister. I’m with Karsten in the back and he has the Jäger and I wanted a sip but Brad says I couldn’t have any. It was three-quarters full and I pounded it. After, Karsten yelled that I was on the team. Basically what got me on the team was drinking Jäger.

How did you get on Huf?
Cichy mentioned something about getting shoes and right after I started getting them he did the Agoura Lifestyle video. I ended up having a whole part and after it came out he told me that we were gonna start working on a Huf am video. It was perfect. 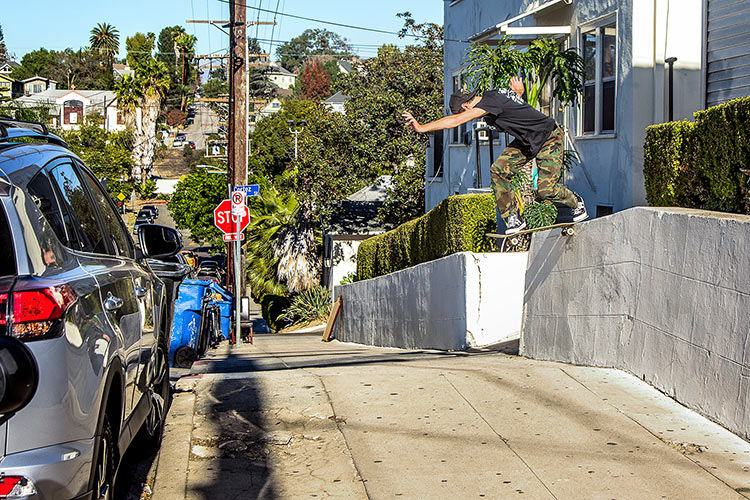 Tell me about getting arrested in Japan.
It was the last night of the trip. Austyn and I wanted to go out and the distributor guy’s homie ran a club so we went there. We drank a lot and got rowdy. We ended up leaving and a second wind hit us. We got all rowdy again, started taking off our pants and running into cars on the street, just being dumb-ass Americans. We go back into the club and Austyn ends up breaking a vase and causes a scene with the staff. As this is happening, four cops walk in and ask us if we are the guys running around and shit. I had all this footage on my phone of us just fucking around all night. They were so caught up talking to each other that I deleted everything. They saw me on my phone and were like, “What are you looking at?” They checked my camera roll and saw there was nothing from the last hour there. However, there was a video from a couple hours before of Austyn pissing in his mouth. That’s all they saw so they started freaking out. They told us to come to the station. The main cop asked me to show the video and he just started busting up laughing. He called everyone else in the room to watch it. They go into Austyn’s interrogation room and I guess they started to impersonate him peeing in his mouth. He had no idea what they were trying to do so they drew a bunch of stick figures pissing into their mouths with me filming it. They wrote USA above it and Austyn somehow convinced them it was a game. Then they ended up just letting us go.

When you get super drunk, why do you pee in your mouth? Where does that come from?
It’s called the bubbler and it’s an Australian thing. I learned it through Austyn and it’s pretty fucking funny. When the time is right, it just happens.

Doesn’t it taste gross?
You don’t taste it; you just fill up your mouth and spray it out. People usually go, “What the fuck?!” I usually do it when everyone’s down and out of energy. I’ll just do it and they get sparked back up.

Did you know that you’re quite the trouble maker? I think it triples when you’re around Curren Caples. Why do you guys always get into some weird shit?
I spend most of my life with him and we’re the same age so we feed off of each other. For example, we shit out of his window while we were playing Call of Duty. He was playing online and he couldn’t pause it and he had to shit so he said he was gonna shit out of the window. He was only going to do it if I did, so he did it and I did it right after. It was a you-do-it-I’ll-do-it kind of situation. 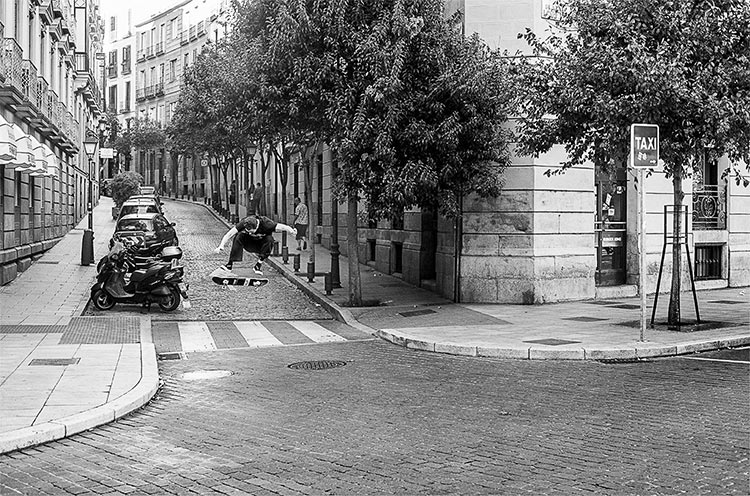 In kindergarten, you were learning how to vote and almost got suspended for yelling “Bush sucks!”
I had my political views.

At five.
I had more political views back then than I do today. I cared more. When I have an opinion, I let it be known. I think my teacher might have been hyped on it but she had to send me to the office because it was part of her job. 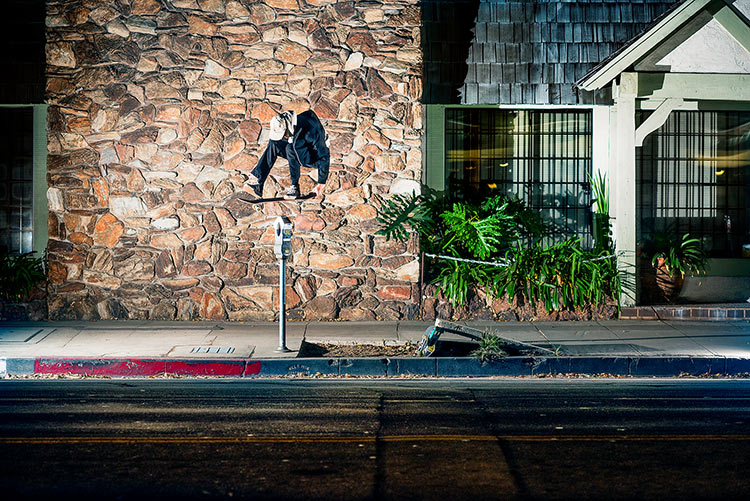 What’s the story with your grandma and the purple jacket?
We went thrift-store shopping and my buddy got me a purple satin jacket. It was really short but I was, like, “Fuck it, this thing is sick,” and my homie got it for me. I wore it around my grandma one time and she goes up to my mom and asks very honestly if I was gay. Granny Annie, she was a gem.

Did you know that you’re famous at the ER?
Oh yeah, I’ve heard all about it.

Who is Tiki Boy?
When I was really young, I was in the backyard while my mom was in the house doing dishes. She could see me through the window and gave me a perimeter of where I could play so I wouldn’t go out of sight. She was on the phone, caught up in a conversation, but she wasn’t looking at me for literally a minute and in that time I climbed up on top of jacuzzi to reach for our tiki torch. I had the gas for it in my hands like a baby bottle, drinking tiki-torch fluid. I was drinking it with both hands wrapped around it, sucking it down. She freaks out, starts trying to call paramedics but is so frantic she calls 119 instead of 911. She finally gets them on the line and fire department comes over. They ask if I was throwing up pink, which I was, and they shove my mom out of the way, grab me and take me to the hospital. I was throwing up all of this shit and the entire downstairs of the ER smelled like tiki-torch fluid because I was throwing up gasoline. For the next eight years, I went to the ER a lot because I was just a shithead, always getting smoked and they would call out to me as Tiki Boy. I had a nickname in the ER. Maybe that should be my alter ego when I drink: Tiki Boy. 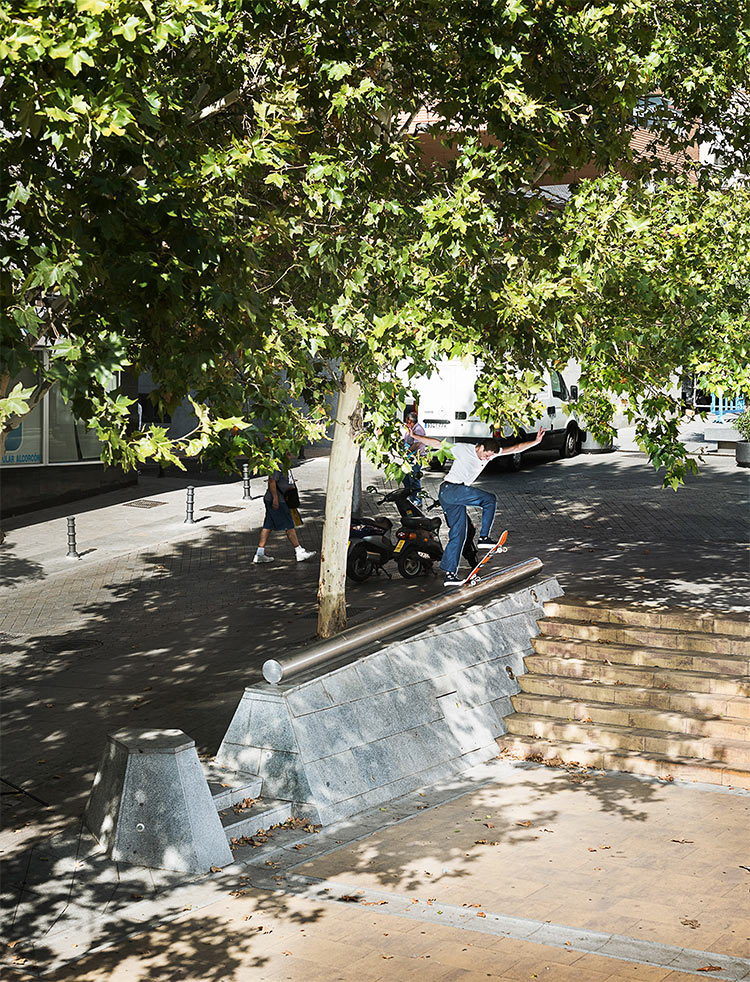 What are you currently working on?
I just got done filming the Skate Mental video, but I don’t know when it comes out. It’s up to Brad. He’s editing it so ask him. We’re doing this Huf project that I’m going to try to finagle a whole part in. That comes out in a couple months. It’s a team video but we’re gonna do all of these trips to film for that.

Do you feel like you’ve finally gotten out of your brother’s shadow?
Nah, I will always be in his shadow. 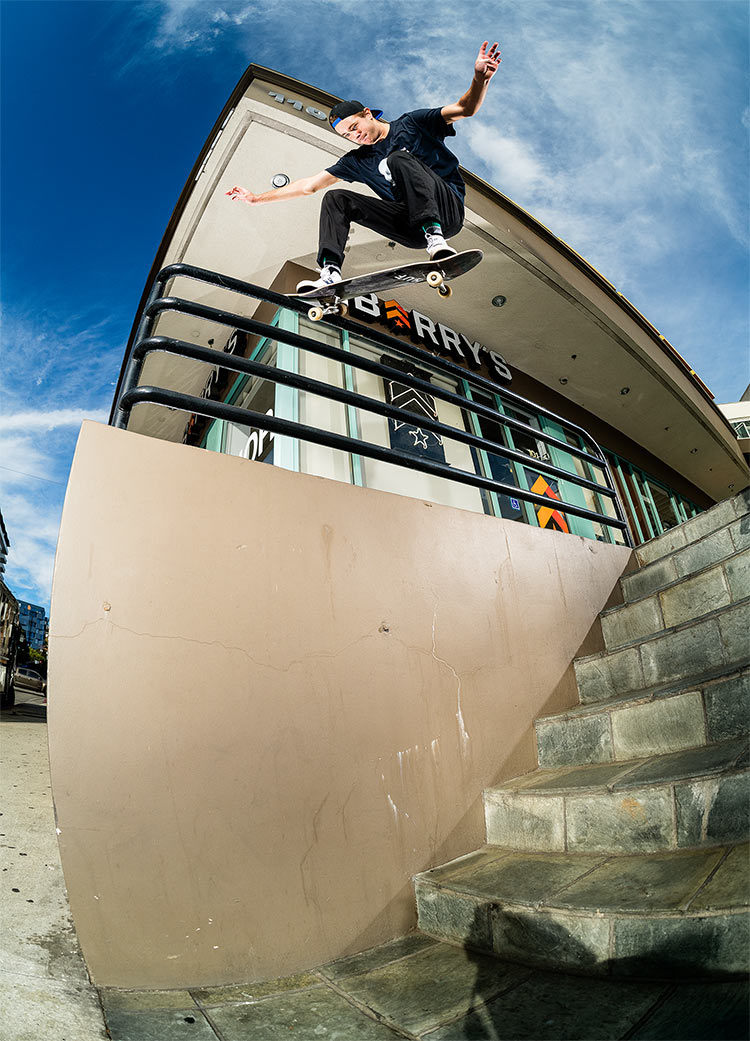