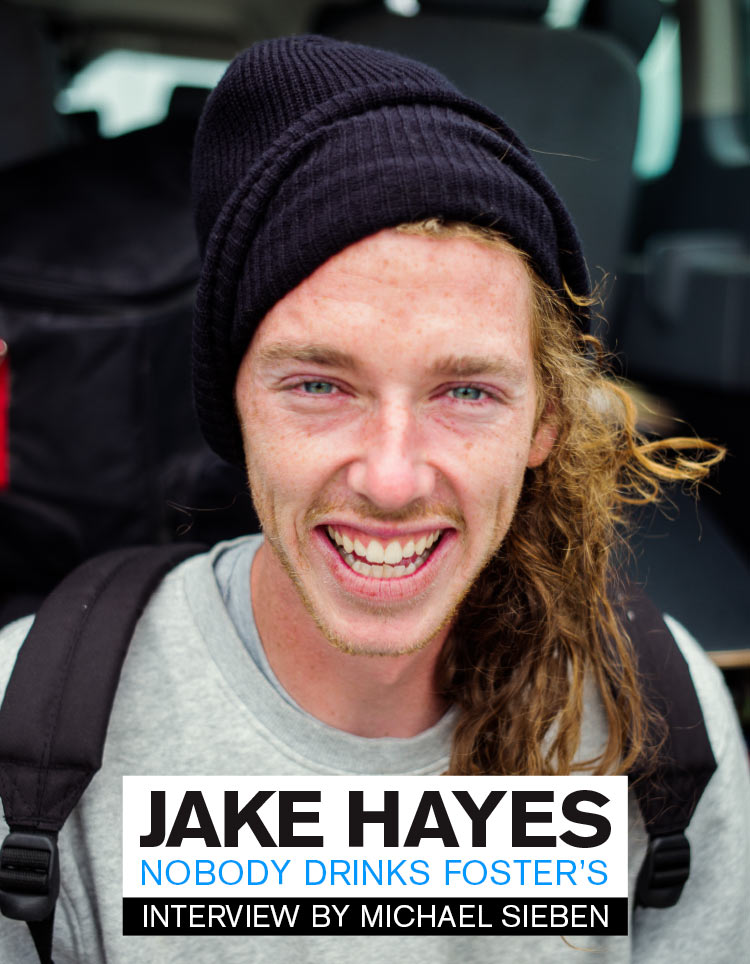 So you said you’re driving to SF. What are you heading up there for?
Just a little Dickies trip to meet up with some of the dudes that are up there already.

You gonna bomb some hills while you’re there?
Hopefully. That’s the goal when you go to SF. Take a tumble or two.

You can check out Dickies’ skid resistance by sliding down a hill on your ass.
Exactly. Really put them to the test.

So you skated for enjoi before Deathwish. Was it weird going head to head with those guys on King of the Road?
No, it wasn’t weird. I rode for enjoi when I was back in Australia. I went on one random trip out there with Louie and a couple of the other dudes but I was way younger. I was just getting flowed boards, so it wasn’t weird.

Did you have an Australian rivalry with Jackson Pilz?
There wasn’t really any rivalry. We were just more stoked for each other that we both got the opportunity to do something like that, and it was way sicker that we got to go together.

What do you think the biggest misconception about Australia is?
That Vegemite actually tastes good, when it really doesn’t.

What does it taste like?
It’s pretty much just salt and yeast.

Do people actually eat Vegemite sandwiches like in that Men at Work song?
Yeah, definitely.

But it tastes like shit?
I feel like it’s one of those things where you either love it or you hate it. I’m one of those people that hates it.

Does anybody in Australia actually drink those big-ass cans of Foster’s?
Not really. Foster’s isn’t really a go-to choice for anybody, I don’t think. I don’t really drink so I’m not really too sure—because I’m not at the bar—but from what I’ve seen nobody drinks Foster’s.

So that’s another Australian misconception.
Yeah, there’s definitely better beers, for sure.

Would you say the menu is representative of your homeland?
I think there’s some things that are representative, but there’s a lot of it that’s still pretty American-based.

What’s the weirdest thing you’ve come across as far as American cuisine?
Nothing in particular, it’s more that the portions are just ridiculous over here. A medium soda in the US is equivalent to a large soda in Australia.

Is that why we’re all such fat asses?
I guess so. Wait, you guys aren’t even the fattest country in the world anymore.

Who’s winning?
I actually heard it was Australia.

You guys beefed us out. What’s some Australian slang that you’d like to introduce to the US?
We say the word chat a lot. It kinda means, like, if something’s shitty. Like, “Ah, that’s chat. He’s chat.” It’s some weird Sydney slang. I don’t use it over here at all because people don’t know what I’m talking about.

When you were a little kid, who was your favorite skater?
Andrew Reynolds, for sure.

What was the first video you saw? Was Reynolds in it?
No, it was actually Menikmati. It’s funny, ’cause Arto has the first part in that video, and now that I get to go on New Balance trips with him, he told me that he felt sorry for me that his was the first video part I ever saw. I was just, like, “C’mon, man, you’re insane.” 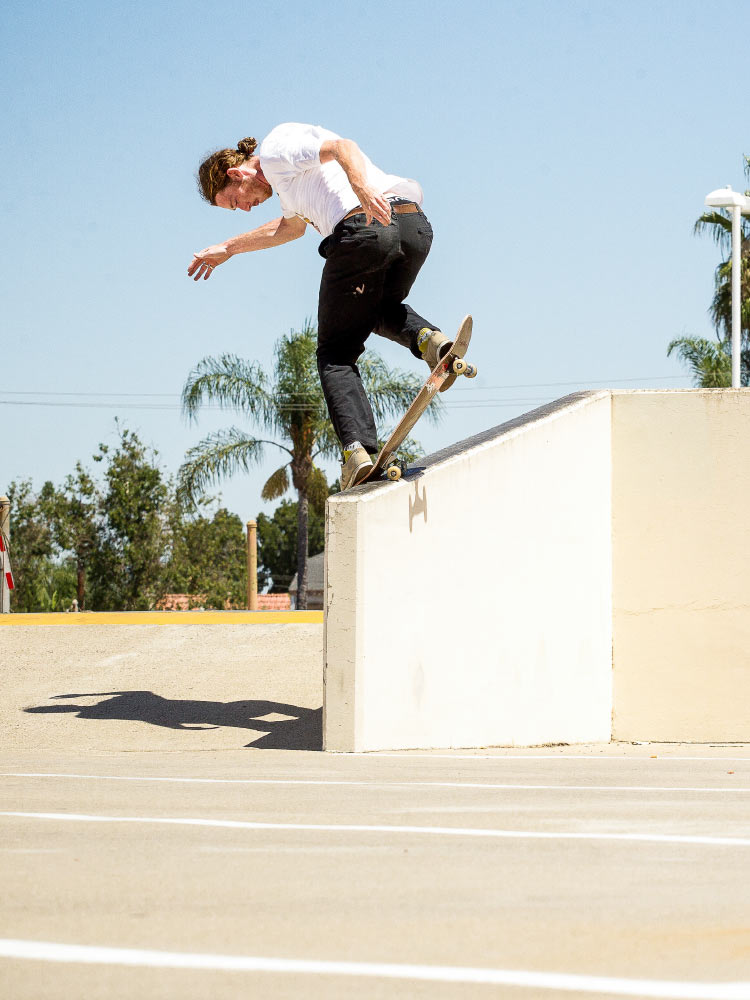 Who’s your favorite skateboarder right now, in terms of contemporary riders?
I really like watching Ishod skate. After you watch him skate you feel like you can do what he can do. But when you actually try it, it doesn’t work out like that.

He’s pretty magical. I heard you used to work in a scooter park.
I used to work at a park called Monster Skatepark in Sydney, and there were definitely more scooters than skateboards but they paid to keep skate stuff in the shop, so it was alright.

Kinda a necessary evil.
Yeah. It was just kinda shit work, though. Just cleaning the skatepark, cleaning the toilets.

What was the grossest thing ever you found in the bathroom?
I actually found a shitty pair of undies tied to the toilet one time. It was fucked up.

Were they little boys’ underwear?
No, they looked like a grown-up’s underwear, but I didn’t touch them. I just left them there.  I just locked the toilets up and called it a night.

Did you really hit a kangaroo while you were driving a car?
Yeah, I did. I was on a little road trip to Canberra, which is about three hours away from Sydney. I’d just bought this car; I’d had it about a week. We were driving through a town heading back to our hotel after getting food and I saw this thing jumping out of the corner of my eye and I looked over and saw it bouncing towards the car. I slammed on my brakes and it hit the front right panel of the car and broke my mirror off and shit. The car was still drivable but it was still a bummer since I’d just bought it.

How did the kangaroo fare? Did he hop away, or was he—
Well, I looked in the rearview mirror and through all the smoke I saw it hopping away. But we drove back through there the next day and it was dead on the side of the road.

Shit.
Yeah, it sucked. I felt so bad.

Is that a serious problem in Australia, the way hitting deer in parts of the US is dangerous?
Yeah, it’s pretty common, especially in the drives between the major cities where it’s more rural. You definitely see a lot of splattered kangaroos on the side of the road.

Tell me about crashing your car while you were yelling at a girl out of the window.
Oh, man. It’s kinda hard to explain. So, I didn’t realize I was moving forward and there was a truck in front of me and I had to pull out, so I was moving forward a little bit and I was yelling out of the window, just being an idiot, and went to take off when I had a gap and  just drove straight into the back of the truck. It was insane.

Was the young woman impressed?
It was a group of them and I think they were all taking photos of me.

After you crashed your car, yeah?
Yeah, instant karma.

What exactly were you yelling at them?
I think I yelled out, “Hey, babes.”

And then crashed your car.
Yeah, it was a low-impact, slow crash, but it still wasn’t the coolest thing.

Tell me the story about crying when Dane Burman got choked-out by security at a spot.
We were skating this seven-flat-one in Chinatown in Sydney. I was down at the bottom and Dane was up on top and a bunch of dudes just kinda came out of nowhere and started strangling him. I was underage at the time and I’d heard a story before about something similar happening and how people that were underage, how they should have taken the blame but they didn’t, and then Dane ended up getting fucked up for it. So at that point, I was freaking out, like, “What do I do? Do I go up there? What am I supposed to do?” And I just started crying. I was only 16 or something. He was definitely getting strangled pretty good. They had him down; it was pretty crazy. 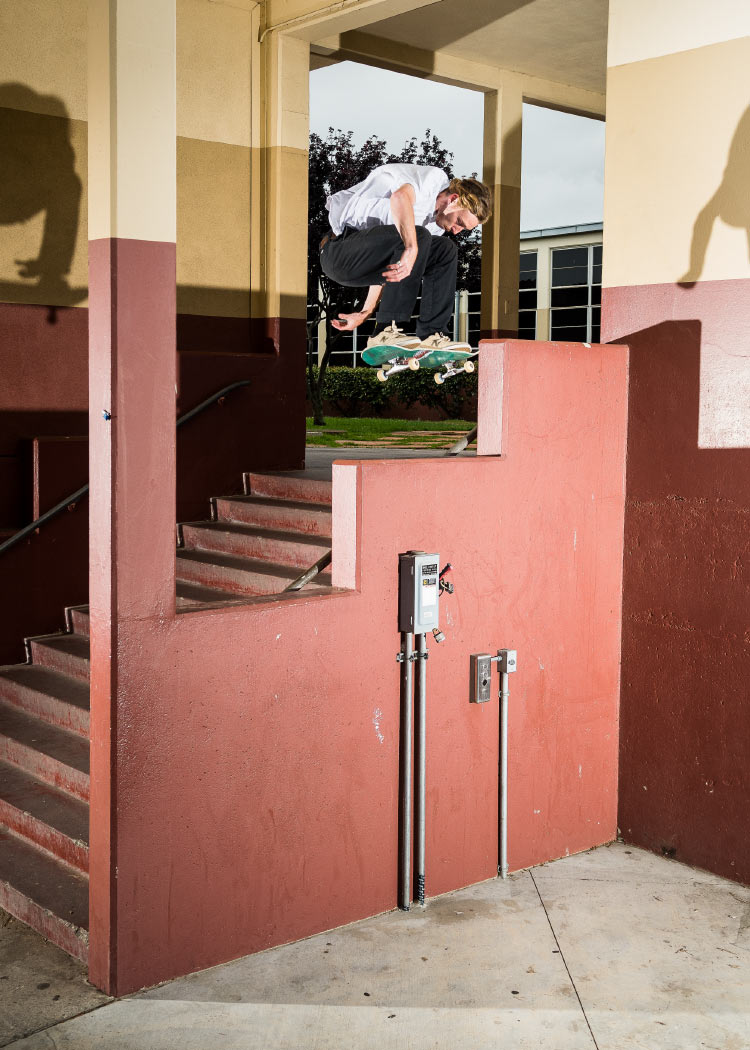 Did Dane get away or did he go to jail?
He got away. But those guys were using excessive force. If they’d gotten caught, they’d have lost their jobs.

So security guards suck in Australia, too.
Yeah, for sure, they suck everywhere. But Dane seems to be a magnet for the shit ones.

Do you have any guilty pleasures, skate-wise? Do you like to do any tricks that aren’t considered cool?
I’ve been doing late shoves a lot lately.

Aren’t those cool again, though?
Maybe. I like doing grab tricks, too. Been doing a lot of grabs.

Street grabs? What are you grabbin’?
More just like flip grabs on flatground. Trying to see what I can do.

What’s your go-to grab?
I think heelflip Indys are the easiest one. It just goes right up there.

What are some trends you think should disappear from the current landscape of skateboarding?
I think the body varials could take a long walk off a short cliff.

You think they’re on their way out?
I hope so. I’m not really a fan.

I read in an old interview that you can’t do frontside flips. Have you learned them yet?
Somewhat. It’s something I’ve been working on for a long time.  It’s one of those tricks where I’ve always wanted it to be as consistent as a kickflip, and I’ve never been able to do them like that. And I had the Reynolds’ influence as a kid; it’s all I wanted to be able to do. But it’s only now that I’m starting to figure it out and possibly be able to film one in the streets somewhere.

When this video comes out, are you going to turn pro?
I have absolutely no idea. I’m just skating and seeing what happens. I’m just trying to film the best video part that I can and see what comes of it.

What do you want to tell the children?
Don’t do drugs.