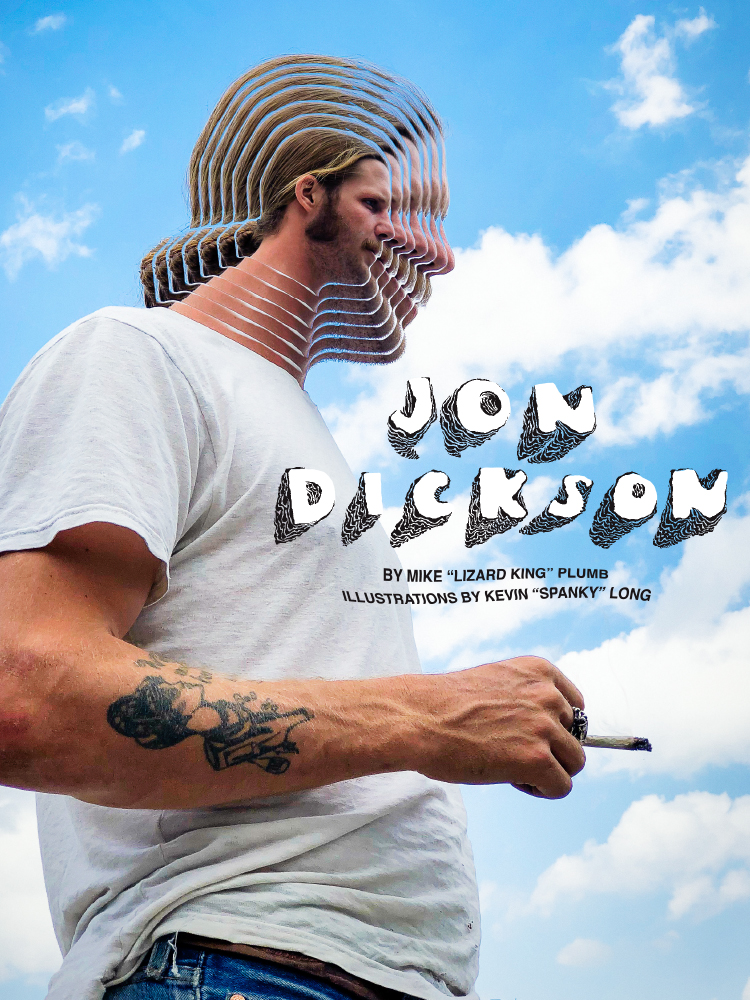 You were such an angry young man out here for a long time. You were kind of a wrestler-looking guy with some anger issues. Now you’re just some happy guy, out here livin’ it. What happened there?
I don’t know. I think people just think I’m mad all of the time. I don’t really like conversations with people that I don’t know. I guess I’m just shy or something.

What about surviving the new struggle of the skateboarding industry? There’s no one to ride for! There’s no one left out there. You made it through the collapse of Fallen and got on Emerica. How’s that going?
It’s going great. I couldn’t be happier.

How did riding for Emerica come about?
I was just talking to Miner a little bit and got something going through him. The video was coming out, too. It just all worked out.

It was meant to be.
Thank you, Miner. For everything. 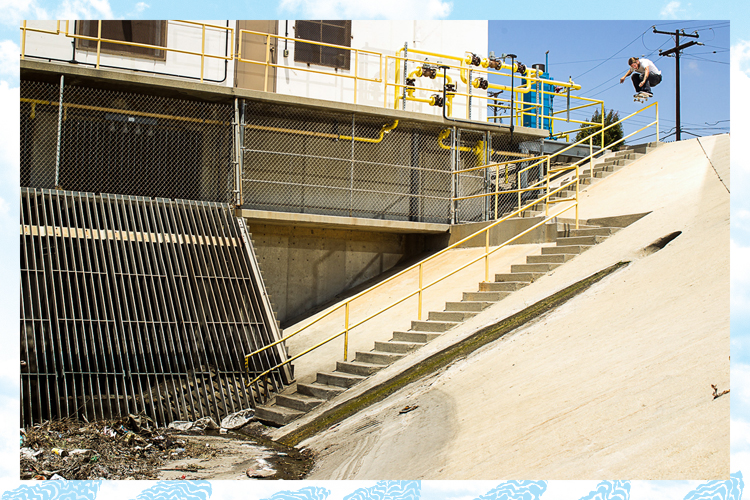 Henchmen are always useless. Jon switch ollies into a ditch straight out of a James Bond movie    Photo: Karpinski

Miner told me in the early days he had to make special rules in the van because of you. You weren’t even on the team, but you had to have rules established. Do you remember what I’m talking about?
Maybe smoking cigarettes too much or probably having beers in the car. Am I on the right track?

He said the Jon Dickson rule was you can only drink beer in the van if you got a trick, or if you tried really, really hard.
Yeah, they let me cruise every once in a while when there was an open seat. It’ll get you to jump down some shit, I guess. 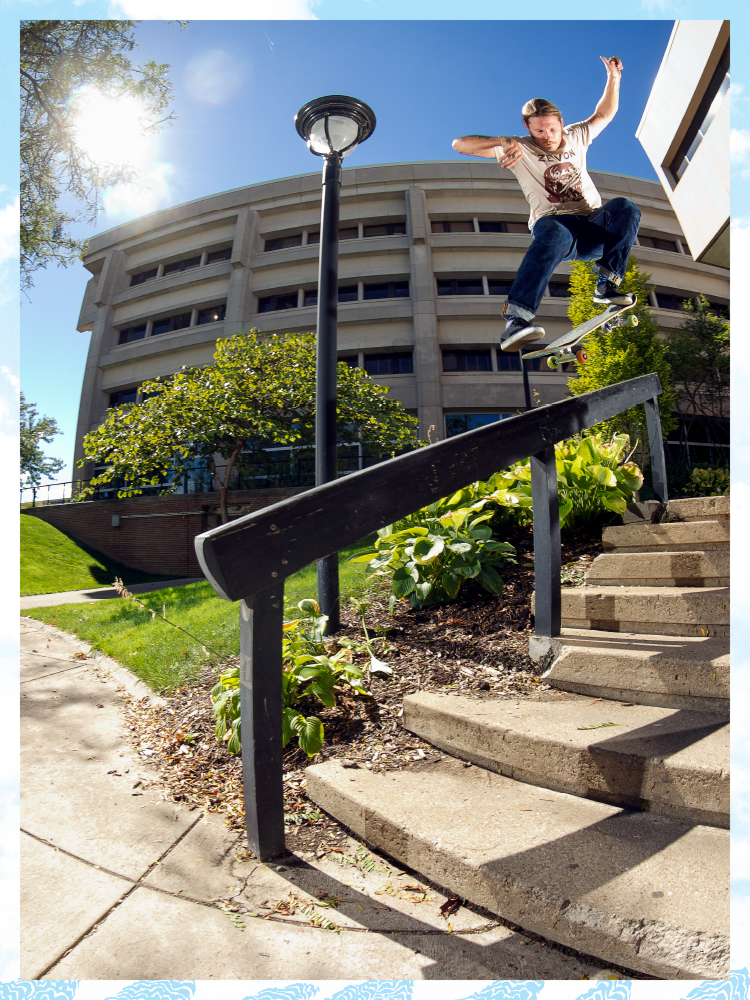 Were you being hectic in the van or something? Were you causing problems?
No, not really. I don’t ever recall making any problems.

You had a rule! People don’t just make rules for people behaving themselves!
I was probably just annoying. Just a fetus drinking beers all day and getting hammered without doing anything.

You got any war stories? Did you ever reach a low point out there with drugs and alcohol?
I just got to a point where it wasn’t doing anything for me and it wasn’t helping me in anything I was trying to do. I just felt like I should take a break. From that break I just continued on to not do it. 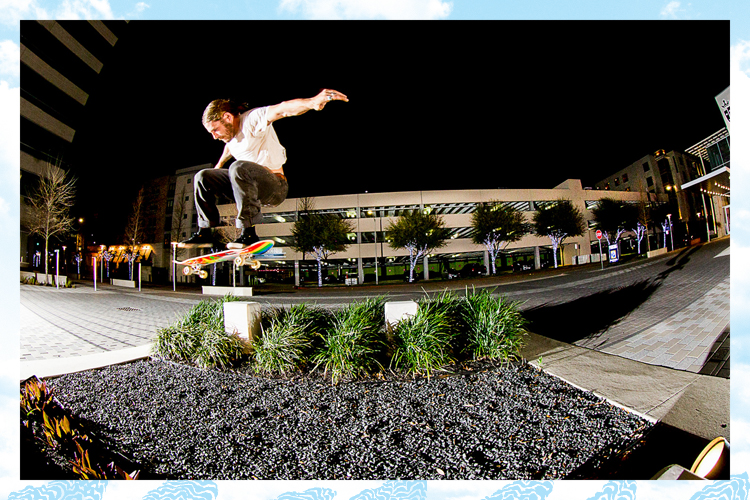 You’re no longer drinking and doing party favors is what you’re saying?
Yeah, what’s the date today? April 27th? May 1st will be two years.

Dude, do you feel better? Do you skate better? Has your life improved? Is that part of the reason you’re so enjoyable to be around now? Because you’re no longer this little muscular drinker. You have a wife and a dog. You still have a cat, right?
Yep, life’s great. I can’t complain. 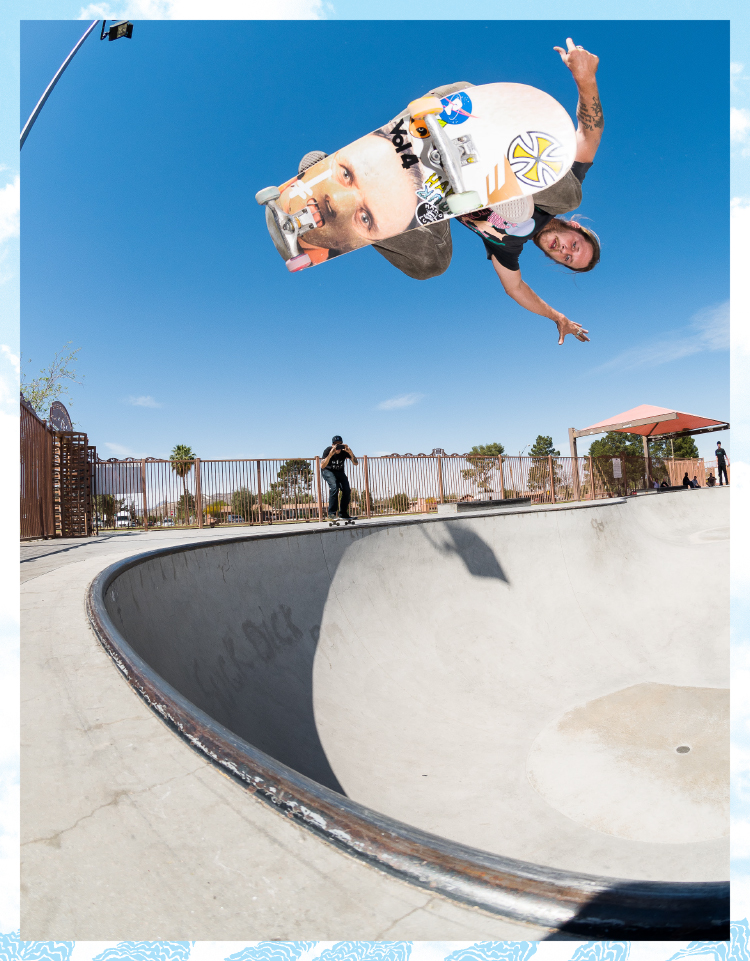 He still gets high. Four wheels out, backside     Photo: Hammeke

So this 100-day bet, did this lead up to a video deadline?
Yeah, the whole Emerica thing happened around the same time. I was going to have a part in the video and I had to get the part out.

Damn. So basically the bet between you and Figgy got you on Emerica.
I don’t know. Maybe. 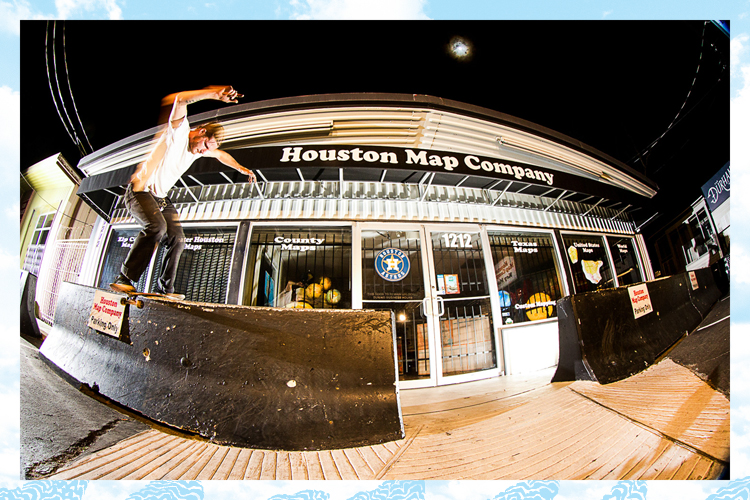 Have you ever accidentally shit your pants while trying to grind a rail?
Yes, that happened.

No way. What happened? Break it down.
I was with Ewan Bowman and it was the first day I ever skated with that dude. He went to Home Depot and bought a ramp for a curb. I went up the curb and I sacked the rail first try. Unfortunately, I shit my pants. I felt bad. I missed the 5-0 and sacked at the very end of this 16 or 17. I felt bad because he spent, like, 80 bucks on getting this ramp. I had to keep skating, I guess. I went and cleaned myself up and got away with a Smith on it. 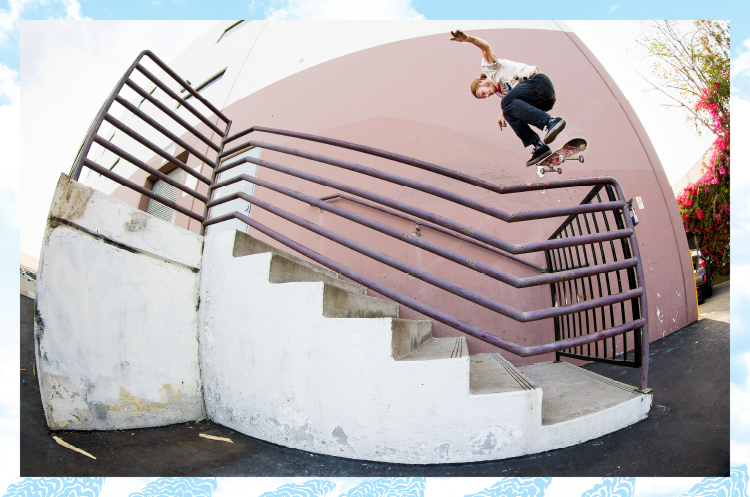 Nollie backside flip, not even that angry     Photo: Karpinski

How did you know that you shit your pants?
I had to check myself to see if I was alright. When I stuck my hand down I had shit all over my hands.

So you sacked the rail and from impact you pooped yourself?
Everything came out. Gravity, dude.

That is beautiful. I heard that only happens to the best.
If it happens at all. Crazy, huh? Rough one. I couldn’t sit properly for two months.

I don’t want to talk to you about it. You just blew my mind. Did you say you couldn’t shit properly for months?
Sit or shit. For, like, a month-and-a-half or so.

Did you break your tailbone or something?
I didn’t go to the doctor. I just told myself I was alright and just left it.

Wow. What was the ride home like?
I can’t even remember, probably just dying inside.

So you got married? Why’d you get married?
Why? Because it’s my life and I can do whatever the fuck I want with it. 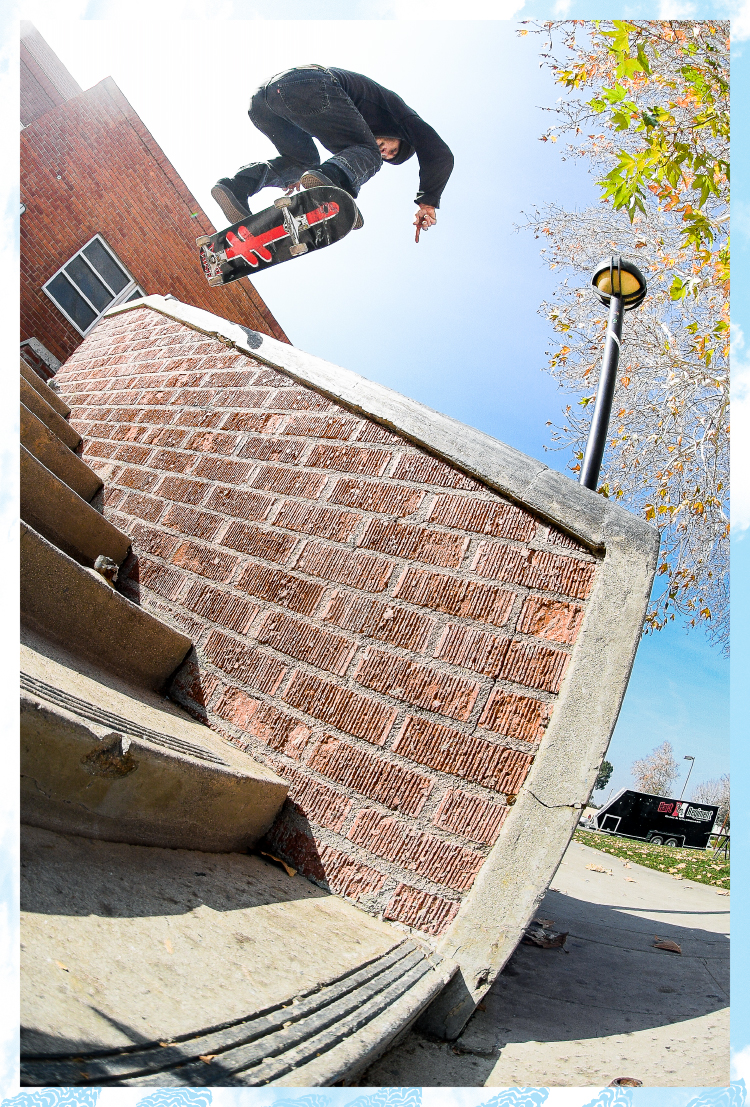 Fighting the earth’s pull with a nollie flip 50-50 in Santa Clarita     Photo: Hammeke

I feel like you’re more grown up out of all the people I see around. You’re probably the only person who can pull it off.
I found someone I could spend my life with.

Then you put a ring on it.
That’s right.

Smart boy. That’s why we put you on Deathwish—to make good decisions. He could shit his pants and still skate after. Have you ever had an arch enemy?
An arch enemy? No, I don’t think so. 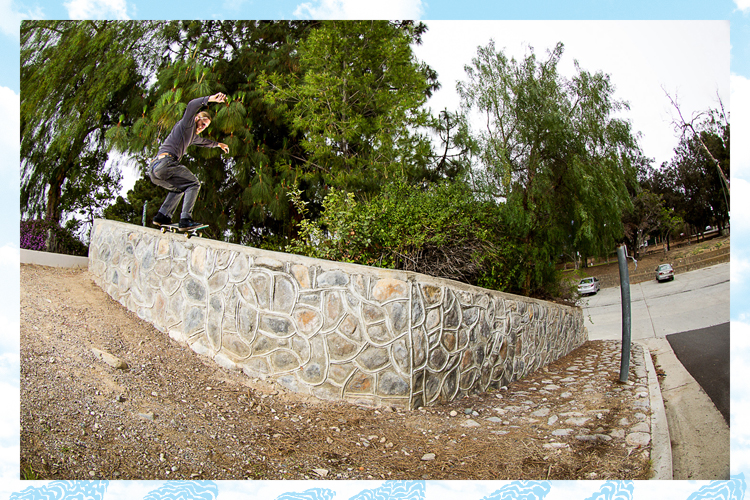 Gap in, Gap out–no wonder nobody has ever hit it before. 50-50 grind at a new old spot     Photo: Karpinski

You have “Fuck Lizard” tattooed on your leg.
Yeah, that’s true.

Now that you’re on the sober path, do you ever give anyone advice about stuff like that?
You can’t really tell anyone what to do. They just have to do it on their own.

True. People always hit me up about that shit on the Internet, and I never really respond. I’m not responsible for someone else’s bullshit.
You can give someone advice but it’s kind of pointless because it’s all up to them. 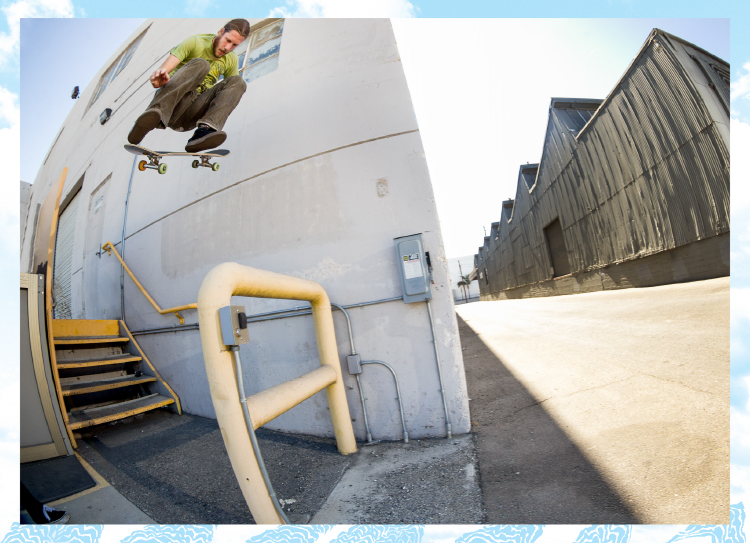 Squeeze play on a frontside flip past the thing     Photo: Karpinski

Would you advise them to start wrestling?
Goddamn it, Lizard.

Are you going to stay out here in California or are you going to go back to the farm? You can move to Utah if you want. I can meet you out there one day.
Maybe I’ll do that.

I’ll change our last name from Plumb to Dickson. Since you quit drinking, can you be around people who are partying? Can you still hang around your friends who are still going for it?
I just don’t care to be around it that much.

I have a thing where I can hang out for a little bit, but once people reach the point of getting an inch closer to your face when they’re talking to you, when they start spitting on you, that’s when I go.
Yeah. I just hate when I get asked the same question over and over. Kinda what you said—I don’t like being around people when they’re hammered. So I just stay away from it. 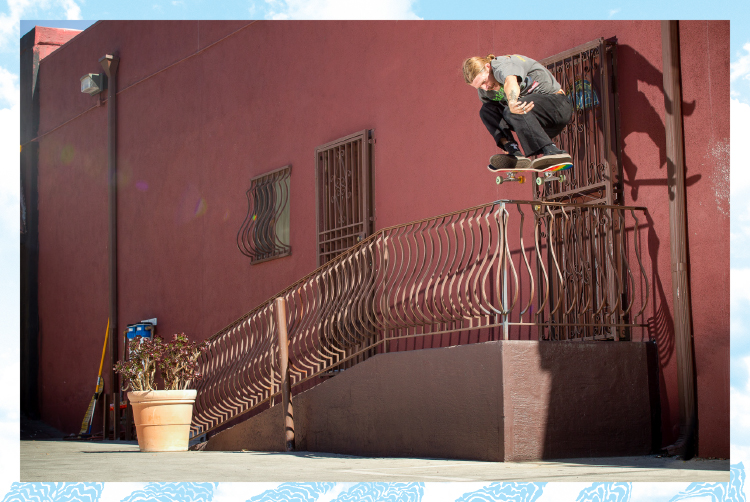 What was it like kickflipping into that skinny ledge off of the top of the drug store in Long Beach?
There was a lot going on.

Like going to Six Flags and going on the scariest roller coaster that they have there without a seatbelt on?
Yeah, you can put it that way.

Sick. Is that one of the scariest things you’ve ever done?
Yeah, I think so. There was just a lot going on. It’s a pretty busy intersection right there. It’s not even just skating off of the roof. You have to look down and see all that other shit, too. There’s cars honking and all this other stuff. It was anxiety filled.

Was there some last-trick pressure going on? Did you set out to get your last trick?
Yeah. We needed something. That was all I could think of at the time. 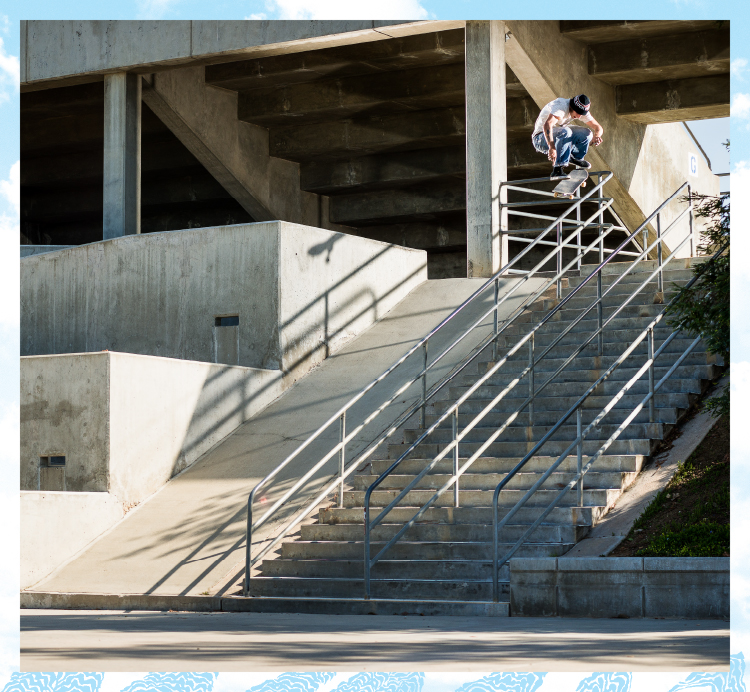 Heavy nollie flip over the rail under some of that last-trick pressure     Photo: Seidler

Hold it down, buddy. You’re not even old yet. You don’t even know what old is. Who are your favorite skaters of all time, Jon? Top three.
Ellington. I don’t know. Is that important?

It’s interesting.
I don’t know. There’s too many to just say three.

Did you have any weird moments when you would come out to California and get to meet some of these guys?
Yeah. Probably going on that Deathwish tour. It was weird. I had you screaming in my ear the whole fuckin’ time.

What are you talking about, dude? Was I doing that, for real?
Yeah. You were.

Doesn’t that mean I valued you as a friend?
Yeah, I later figured that out. 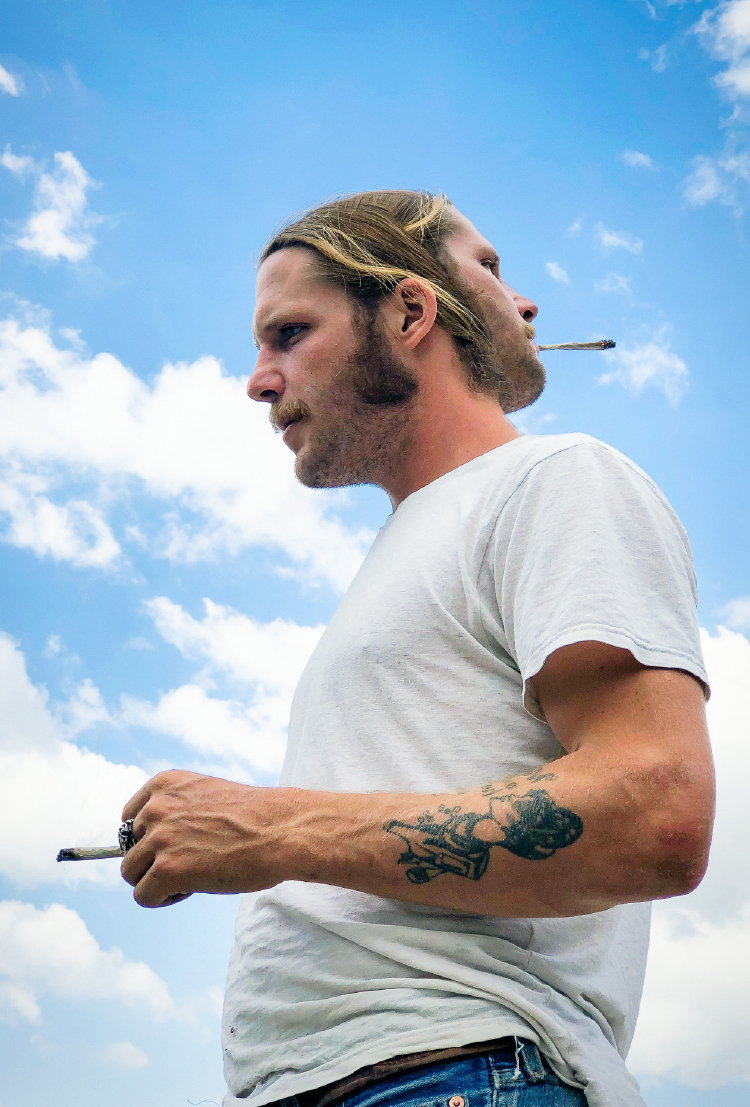 Guess what, buddy? You got asked to be on the team at the end.
Didn’t we go to Salt Lake City for two months?

Exactly! No one’s ever gotten that treatment except for Richie Belton. Richie Belton is the only person that always came through. You and Figgy came but he left and you kept on living the dream.
Yeah. Kept it goin’ until it got cold. 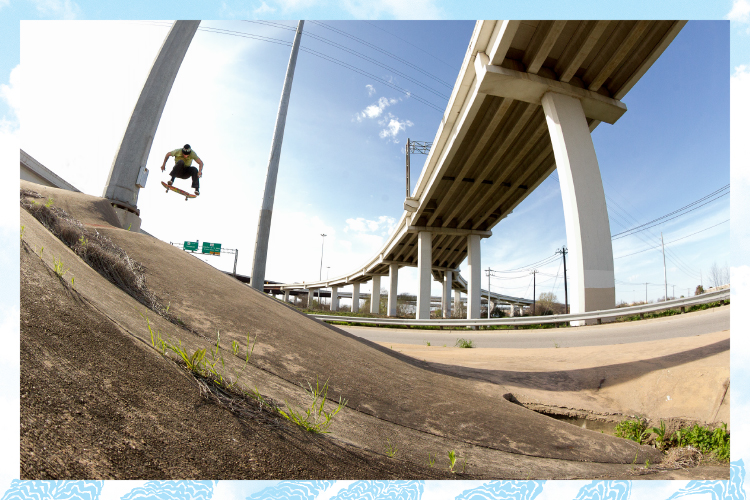 You stayed at my house and you and Oliver Buchanan made a video of a peanut butter and jelly sandwich eating itself.
Ha. Yep.

That’s gold, baby. Throw that up on Thrasher when the interview comes out.
We had a camera and were filming little stop-motion animations. Just making bullshit all high at your house.

Didn’t you lose your virginity in Salt Lake, too?
Did I?

I think you did.
Yeah. That happened.

A peanut butter and jelly ate itself and then you became a man!
Jesus Christ.

Had you never met me you would have never gone to Salt Lake! You might still be a virgin, dude. You might have never met your wife. You wouldn’t have anything going on. You’re welcome!
I owe everything to you, Lizard.

Lizard is always looking out for you, Dickson.
Always. 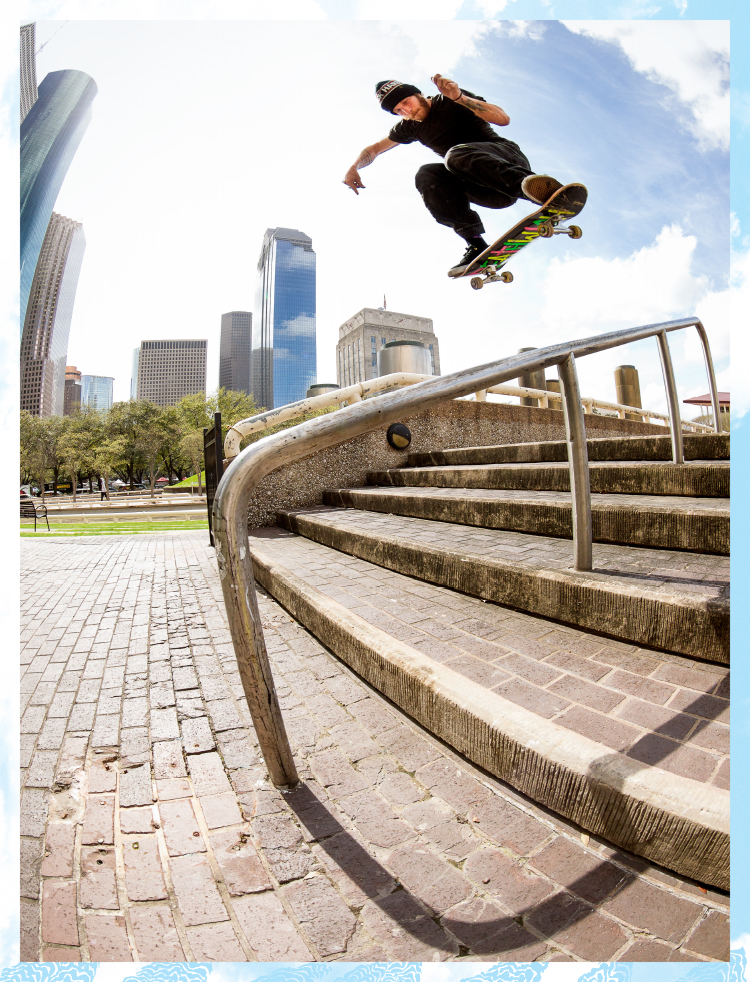 Jon owes it all to Lizard. Switch kickflip board. Thank you, Mr. Plumb      Photo: Karpinski