Journey to the Edge: Ty Evans Explores The Flat Earth 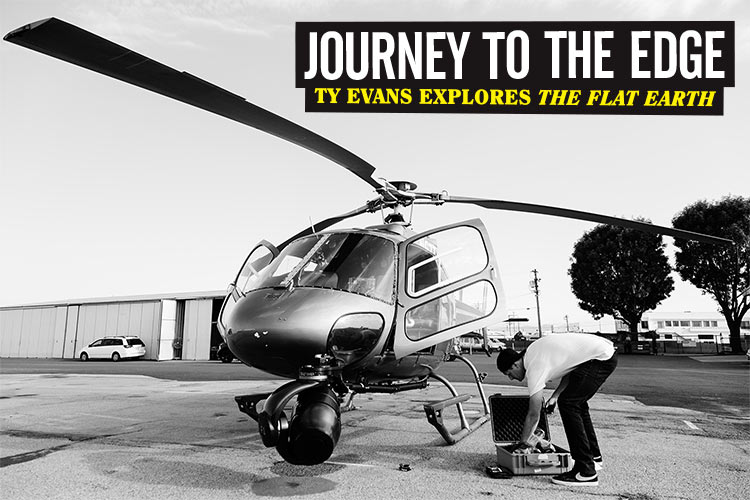 Ty Evans has been actively making skate videos since the mid ‘90s, constantly pushing the boundaries of editing techniques and consistently on the forefront of modern camera technology. Now on his 26th or 31st video (he’s not sure which), Ty has brought it all back home and for the first time in his storied career is making an independent skate film, without any funding from outside entities. I hit up Ty to talk about conspiracy theories, childhood inspirations and the future of skate videos. —Michael Sieben

So are you a flat Earther?
Oh my God. That’s funny. You know, when we started this film it had nothing to do with the flat-Earth conspiracy. I actually don’t even know too much about it. All I know is that if the Earth is flat I’d like for somebody to take me to the edge. I’m dying to see it.

You’ve probably been around the whole world, right?
Yeah, man, but for this film we actually did a bunch of US trips. We put some miles on the van. I went through two engines just for this video. But the whole concept of The Flat Earth is that I wanted to make this film a little different.
I started experimenting with a couple of new cameras, ones that can record in full 360, and it gives you the option to manipulate the footage in new, different ways. I realized you can bend the horizon super crazy. You can take footage that’s all bent 360 and flatten it out. That’s where the video title came from.

Did you see that story about the rapper B.o.B’s GoFundMe to prove that the Earth is flat?
Somebody sent me that link but I haven’t clicked on it yet. I don’t even know if I want to click on it. But it’s so funny because so many people have come out of the woodwork asking me that question. I kinda knew people were going to think it had something to do with that. It makes for good conversation, though. The other day this guy told me his mom was an Earther. That’s what they call themselves, apparently.

Why do you think at this moment in time there’s such a distrust of science?
I think as the information age grows people are starting to feel like they have the keys to the castle. And maybe everybody is just starting to question everything. Look at our whole society. Like the NSA stuff that Snowden revealed a couple of years ago. That was straight-up conspiracy theory stuff, and now the whole world is admitting that a lot of that stuff is true. I don’t know. Maybe the Earth is flat. Maybe there are aliens out there. Maybe there are even dragons flying around unicorns out there.

You’re known as a technically progressive videographer, always trying out the latest gear. What’s your take on people who are still running the VX1000?
I love it. I think it’s amazing that there are still VX1000s out there working. I love that aesthetic. I just did it for so long that I felt like I ran the gamut with it and did as much as I could do and I wanted to try new things. But it’s rad seeing guys like Brian Panebianco from Philly and his Sabotage videos. His stuff is fucking sick. His videos feel like the stuff that we did back in the late ‘90s and early 2000s and it’s cool to see that some of those guys are carrying that tradition on and still killing it.

Was there a conceptual backbone for The Flat Earth or is just raw shredding?
The last film I made, We Are Blood, was this huge mega film with the biggest budget in skateboarding and all this craziness associated with it. It was an amazing experience for me because it was very challenging to complete the process. After I was done with that film I took a breather and started my own production company called Ghost. Luckily, I got a couple of jobs right off the bat and took all of that money and invested it in cameras. And it kinda dawned on me, like, I have all this gear. Why don’t I just make another skate film? I’ve made 25-30 skate films over the last 20-plus years but I’ve never really made one on my own. And right around that time I started noticing some of these younger guys like Jamie Foy and Carlos Iqui and I was, like, man, what if I just do it with some of these up-and-coming guys when I’m not doing non-skate stuff. It started as a labor of love. There’s no companies backing it or sponsoring it. We did it 100-percent on our own. I hate the term homie, but the guys keep saying it’s like a homie video. For me, it feels like one of the most true skate films I’ve ever made. I’ve spent my life savings on this project, which is why we’re putting it on iTunes. Hopefully I can at least break even. I’ll be satisfied with that. But I think these projects are bigger than the film itself. It’s really cool when you can help build somebody’s skate career. It’s cool to be a part of that process.

Were there specific skate videos from your childhood that made you want to make skate films?
Oh yeah. When I was a kid I was so green and sheltered. I had a challenging childhood and the thing I always looked to was skate videos. They taught me everything: music, what’s right, what’s wrong, what’s cool, what the world’s like. They helped guide me. All the early Powell videos and Sick Boys, everything that Stacy Peralta did, seeing all that stuff was very powerful and having the opportunity now to do that myself is a really cool feeling. I’m 44 years old and it’s pretty insane to have the chance to make one last skate film. I’d love to keep doing them forever, but who knows. I’ve always had this weird outlook that we’re only here today and we’re never here tomorrow. I just want to leave my mark and contribute to skateboarding and hopefully there are kids out there who see it and get something out of it the same way I did when I was a kid.

Do you feel like this will be your last video?
No. It’s so funny, man, I hear all these really young skate film kids who are, like, “Oh, this is my last video,” and in my head I’m, like, “You’ve done, like, two of these fuckin’ things. You gotta be fucking kidding me.” I’m 44 and I think I’m up to 30 of these things. I would love to go forever, but skateboarding is such a young sport and so is the filmmaking associated with it. But the fact that I’m able to go out and get non-skate work based on my experiences and the skills I learned through skateboarding is insane. But I’d love to be able to keep making skate films until I’m dead.

Do you think that the future of skate videography is one-minute videos for people’s phones, or do you think full-length videos will continue to exist in the future?
I really like the full-length. I like the whole package. When I worked for skate companies, I liked traveling the world with riders. It felt like you were a band of brothers coming together to make something. And with this film, it felt like that. These were all random guys who came together to make something. And I think in 20 years it’s going to be cool to look back on that encapsulated experience. I think that’s cooler than just looking back at a single video part.

Who is somebody you’ve never filmed that you’d like to work with?
Probably Danny Way but when he was a kid, with how insane he was pushing everything. Danny’s fucking amazing and I filmed with him later in life, but when I was a kid looking up and seeing a 13-year-old Danny Way doing the most amazing shit, pushing the boundaries of skateboarding and then watching that through the media, it was something so insane to see and I don’t think anything like that will ever come again in skateboarding. That would have been insane to have been a part of that.

What’s your advice for aspiring skate videographers?
It’s amazing now that everything is so accessible. Whether it be filming something on your phone or getting an old VHS camera from a thrift store or even a high-end camera, everything is there for kids to go out and learn. It’s definitely one of the most gratifying things to aspire to do something and then to actually go out and push yourself and do it. Just go out there and grab the camera and make it happen. 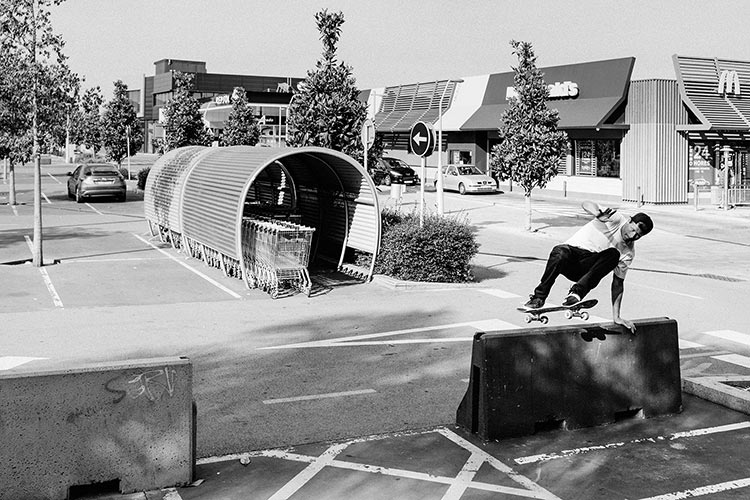