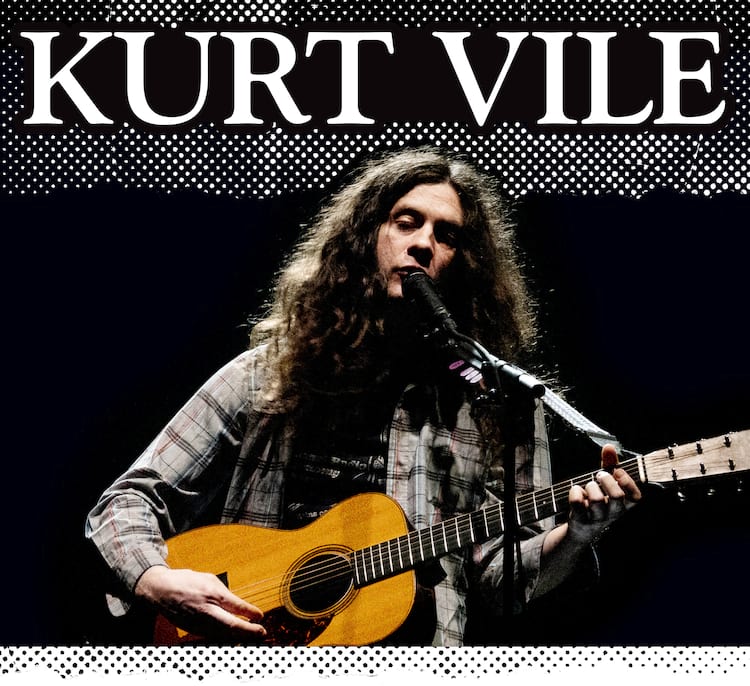 THE FIRST TIME I heard the song “Baby’s Arms” by Kurt Vile, I remembering being blown away by the complexity of the songwriting and layering of sounds in the most simple way. Talking to Kurt about music and skating, I figured out that’s the way he rolls—multi-layered but simple. —Atiba Jefferson


Where are you from?
Well, basically Philly, Pennsylvania, but really from Lansdowne, which is a small suburb right outside of Philly.

And where do you live now?
I live in Philadelphia.

You never felt the need to move to a bigger city, like New York or LA?
Well, New York is close enough. It’s an hour and half away—or more in traffic—but if it wasn’t that close I would have had to move somewhere else to make it in music. But I’m lucky that I didn’t because now there’s a lot of people fleeing from New York, and I’m, like, I got a house, got a driveway, next to the woods in the city. I feel good that I didn’t have to go somewhere and pay rent. I just worked and then got signed and bought a house.

When did you start playing music?
I started writing my own songs and playing string instruments by the time I was 14. I started self-releasing cassettes and CD-Rs, in 2008.

Did you skateboard?
I did; that was my first obsession. I was into music and listening to it. I played the trumpet since 4th grade, so I’ve always played music of some sort. But skateboarding was my first obsession, for sure. I’ve actually just picked it up again recently. I just ride. I don’t do tricks and stuff because I got to keep my hands intact for playing music. I bought this reissue Toy Machine board—it’s an Ed Templeton. The drawing of the girl whose leg and arm are connected.

How old were you when you started skateboarding?
Twelve, 13? I can’t remember now, but it was around then. I was still doing it hardcore up until I was, like, 17. I would still do it when I was 18, but it fizzled out for awhile. I would always ride one when I saw one, but I wasn’t doing tricks or anything anymore.

Do you remember what your first board was?
I don’t remember my first board, but soon after I got an Alphonso Rawls and then I had some Alien Workshops. But Toy Machine, I had all their videos and stuff. When Toy Machine came out it was my favorite­—Ed Templeton mixing everything art and skateboarding combined.

What tricks were you doing?
I could heelflip, ollie down steps and off loading docks. I finally landed one boardslide on a handrail and then I twisted my ankle. I certainly was never eligible to be sponsored or anything like that.

Did you ever skate local spots?

We’d go down to Love Park in Philly and see what was going on down there but would get intimidated sort of but also get inspired. Then there was a skateshop called Chaos Skateboards in my neighborhood and they put on a competition/demo kind of thing.

Did you ever see any pros skate?
Ricky Oyola. We were always afraid of pros. Nothing much has changed. Anytime there’s anybody older than me, even in music or whatever, I just look at them over there—I’m just terrified of them.

Did you pay attention to music in skate videos?
Yeah, definitely Toy Machine and also Stereo. I had one of those videos and they were playing a bunch of jazz. That was awesome. I had a bunch of videos, but most influential are the Toy Machine videos with Sonic Youth and Fugazi. The very first Toy Machine video I got, it opened with Ethan Fowler skating to “Great Cop” by Fugazi and it was incredible. Ed Templeton’s thing in general was like a rock star. Later on it was getting more and more extreme with Jamie Thomas. There was definitely cool music to go with it all. 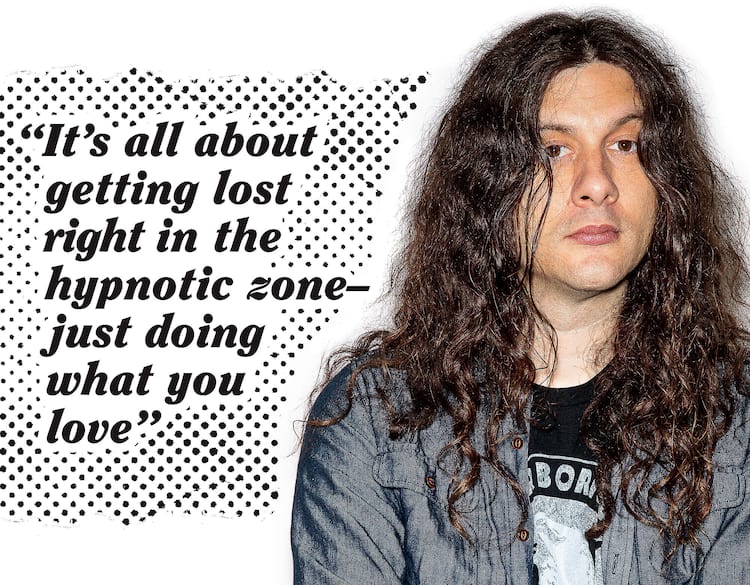 Let’s talk about your new record. How was the writing process for that? Where was it recorded?
It was kind of recorded all over, which I’m used to, but the three main places it was recorded were two places here in LA and one in Bridgeport, Connecticut. They’re all very different; all three of those guys work in very different ways. It was just multi-dimensional which is better than one-dimensional, for me. I like different perspectives.

You said Ed worked on some artwork? How did that come about?
Well, I would write my Philly contact in the skateboarding world; that would be Adam Wallacavage. He’s a great photographer and great artist. He also took the photo on the cover of Wakin on a Pretty Daze. He’s a multi-talented guy. He talked to Ed and told him about how I’m a fan. I saw one art show of Ed’s back in ’92 when he came to Philly, shook his hand for a second. I showed Adam that I had just gotten Ed’s reissued board. He forwarded that along to Ed and I was basically nostalgically getting back into skateboarding, just totally riding around and I was talking about it with my manager. He said we should get him to do a shirt or something and it just turned into that basically.

Tell me this: when you’re touring, do you see skate spots?
There’s a part of me that always looks out like when I was a kid, riding in the van with my dad.

When you’re making music, do you see similarities to when you were skateboarding?
It’s definitely similar in that you could jump on your skateboard and just carve down the street—ideally on smooth blacktop or whatever. You’re just coasting. I do the same thing with the way I play certain songs. I have a song called “Bassackwards,” one of the singles. It’s, like, nine minutes long. You might as well be skating downhill on that song because it just kind of coasts along. You’re on a groove. You know basically where you’re going, but you don’t have to know exactly where you’re going. It doesn’t matter, just like if you’re skateboarding. You can be going down the street and decide to fucking, you know, take a turn or jump on top of some fucking loading dock if you got the skills. That’s kind of similar to the way I play music. I can just go forward or take a turn, whatever I want really. That’s the beauty of both of those things. 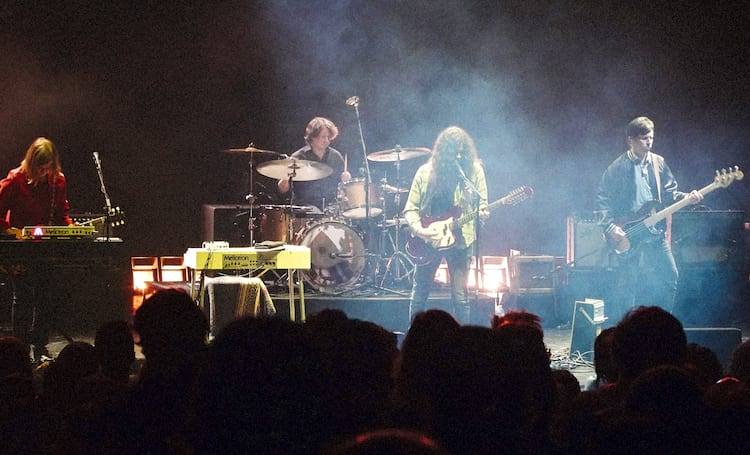 Your music has been used in skate videos. Are you aware of that?
No. I mean, maybe I just forgot or maybe they didn’t go through the proper channels. Maybe I’m going to have to sue somebody. Just kidding.

Why do you think people pick your music for skate videos?
Oh, man, I don’t know, but that’s a super compliment because that’s definitely my teens—growing up watching skate videos. I learned about a lot of cool stuff through skate videos.

Who are your top-five favorite skaters?
I’m just going to say there’s probably more, but the ones that impress me off the top of my head are definitely Ed Templeton, Jamie Thomas, Ethan Fowler. I remember Gershon Mosley was pretty awesome. Also Dune, who skated for Stereo.

What inspires you to make music?
Well, it’s just in my blood. I was just asked to make this playlist for Neil Young archives, and so I’m just listening to all my favorite Neil Young shows, albums, songs in a row and just getting loose in the hypnotic zone. It’s just in my blood. I could pick up a guitar and get zoned out; it’s getting fucking lost. It’s just like skating, really. It’s all about getting lost in the hypnotic zone—just doing what you love or listening to what you love. You’re just attached to that.