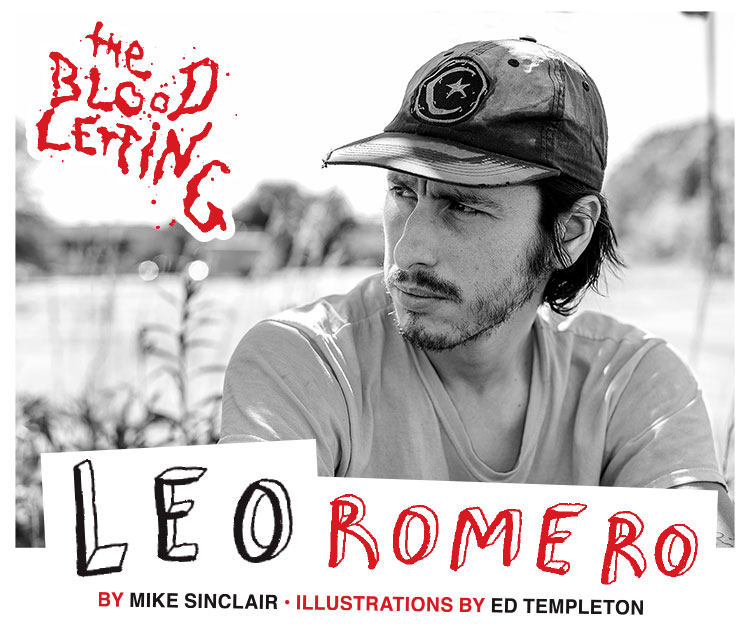 Leo Romero is a born leader and his passion for life is contagious. A true skate rat out for blood, he has a nose for danger and will gladly lead the team in its direction. He seems to get a thrill out of watching people slam and I’ve seen him take the gnarliest falls, sliding across the pavement getting his skin chewed off while laughing out loud. Budget or no budget, he’s out there doing it, not waiting on a handout from anybody. And although he’d never admit it, we all know he’s in charge of this team. Leo, you are something special, my friend. Let’s keep it going ’til the wheels fall off. 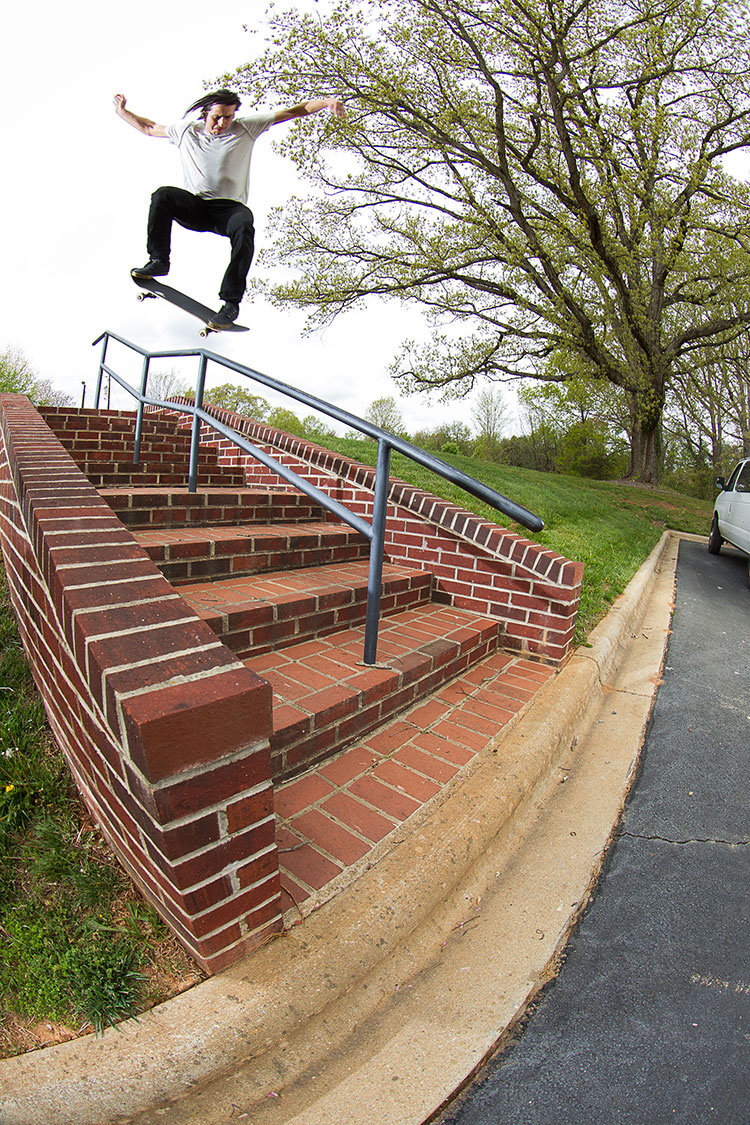 Once a SOTY, always a SOTY—gap to crooks, slowing down is for nerds     Photo: Karpinski

Where are you at right now?

You’re still going strong on the road; I like it. What trip are you on now?

I’m on a Emerica trip promoting my shoe down at Geometric skateshop in Houston, Texas.

Did know you were the only rider to make it 74 days on the Programming Injection tour?

That’s not true. I had Dakota Servold right by my side the whole time.

I’m talking about the only Toy Machine rider to make it.

So for the next Toy Machine tour, are you down to go longer?

I’m thinking about moving out of my house and never stopping.

Yeah, on the Programming tour I was dealing with some personal stuff but I wasn’t bummed on the tour or at anyone. Darkness comes in many ways and at different times. I just have a whole lot of it in my heart and I’m trying to get it out at all times.

I’m claiming you are the leader of Toy Machine right now.

Never, I’m not the leader of anything. 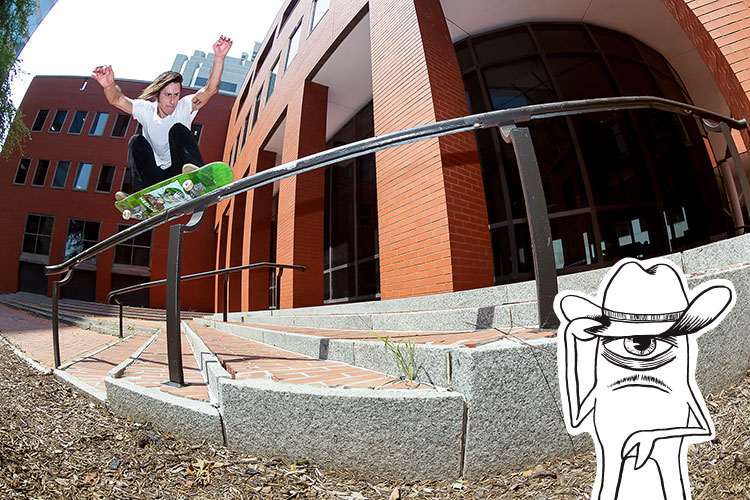 Well, I think you are the new team leader and so does the team.

You sure don’t sit around and wait for things to happen.

You understand how it all works.

Honestly, I think what started this whole thing is when I was working on my last video project I was in charge of my own trips and that got the ball rolling for me, but the Programming Injection tour was a little different because it’s a team thing and you helped facilitate to make it all happen just as much as I did.

I just want to see you guys out there doing what you guys want to do.

I know you do and we are doing our best out here.

We love it too.

I think a lot of people would be surprised at what we can accomplish with what little we have to make something happen.

Oh my God, no one could fuck with what we are doing. No per diem for two months? Ain’t no one doing that. We are the only ones crazy enough to do it. 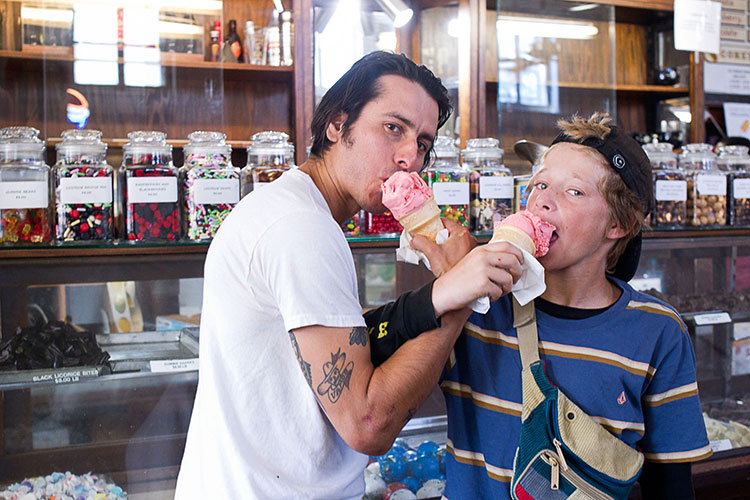 So CJ Collins is Toy Machine’s newest pro. He said you took him under your wing along with the Toy Machine team and taught him some life lessons.

I didn’t take him under my wing. He just sort of crawled up under my wing and never left. He’s a different type of skater. He’s awesome and he’s in the contest world that I don’t know anything about. When CJ comes on these trips he fits right in. He’s picky as shit. He doesn’t want to skate some days. But when he finds something, it’s pretty gnarly and it’s amazing to see.

Yeah, and he’s got a natural talent for transition. He was born with it.

Oh, he’s unstoppable at a demo and in the parks. It’s cool to see him in the spotlight doing what he does best. 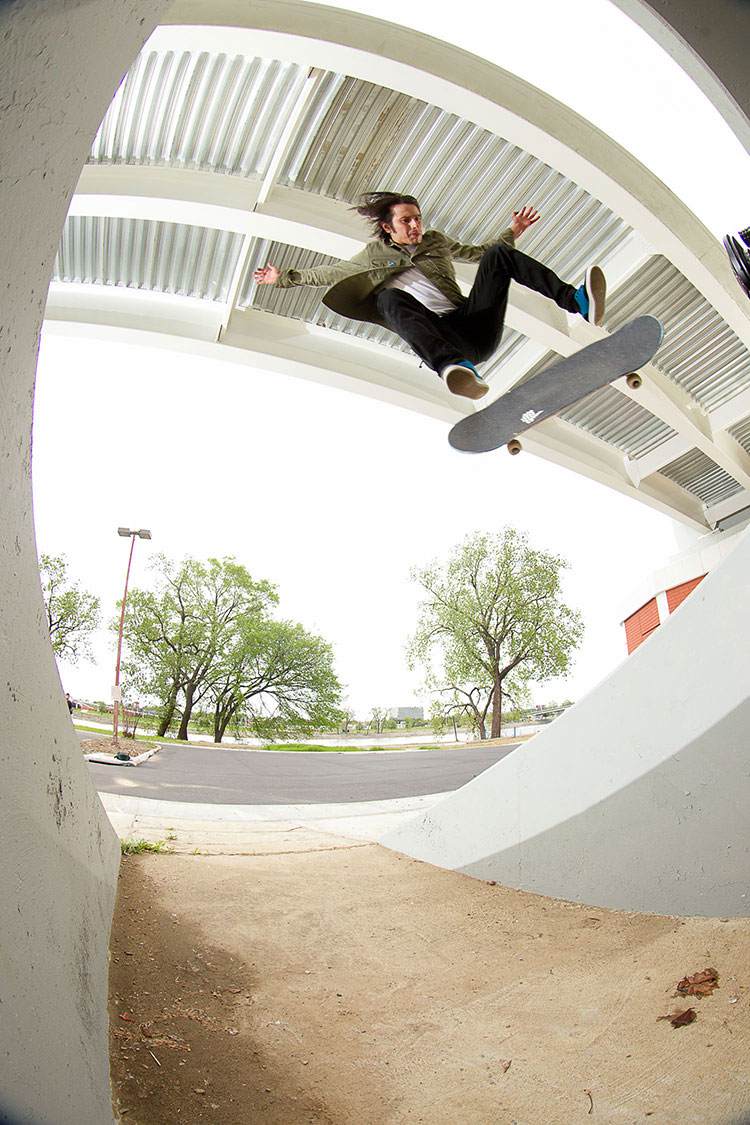 Floating kickflip to fakie for the Bros     Photo: Karpinski

What do you think has changed in the last nine years at Toy Machine?

Just the team, really. I miss traveling with the old team but I love the new team and skating with all those guys so much. A few years from now people will be talking about “Remember when Leo was on Toy Machine?”

I noticed that you keep talking about getting older and retirement and stuff like that. What’s going on in your head right now? Because I think retirement is far from being a reality for you.

As far as retirement goes, I don’t think the term actually applies in skateboarding, It’s been a 24/7 slumber party for me. I don’t know what the fuck I want to do really. I’m always going to go on trips, even when I retire. I will still be skating for as long as possible. I think of it more as making room for new guys. There is just not enough pie left and I want to see the new kids get a little piece of what’s left.

I think that the talent pool is bigger than ever right now, but there are also fewer solid sponsors than ever.

I think that’s definitely the case. Only a few shoe companies and 4,800 board companies and only one magazine. It’s pretty tough; it’s crazy. Trying to be an up-and-coming skater these days, I don’t envy that at all.

I know you love staying out on the road, so what would be your dream Toy Machine trip?

An unlimited budget. It’s me, Dakota, Jaws—I know those dudes are not Toy Machine riders but they are part of the road crew. Jeremy Leabres and Glick too.

How much budget do you think you would need for this dream trip?

Well, we just did 74 days on the Programming Injection tour with only 12K, so 100K would be nice to have to spend just until we were ready to come home and see what we come back with.

Do you think more money would equal more clips?

I’m living the dream right now. Every trip is a dream trip for me. Maybe I would try to ship the Tum Yeto van to Europe if we had an unlimited budget. 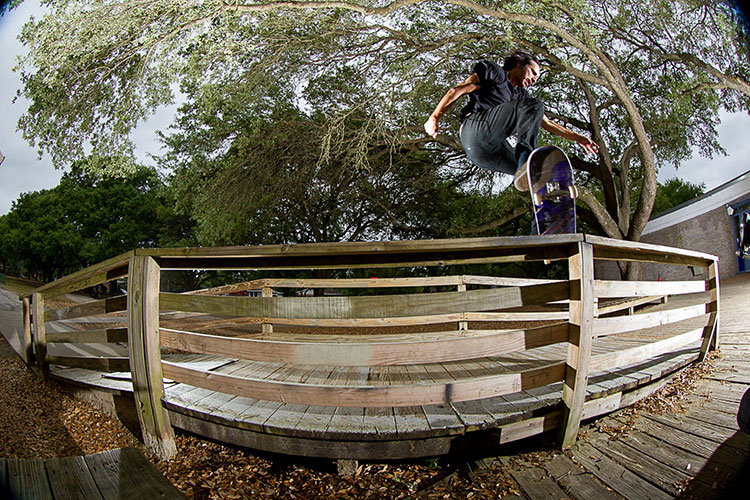 Are you still in a band?

Do you travel with them a lot?

I wish. They are a little funny to travel with.

Well, I don’t know if people know that skate trips are grueling and you are going for it all day long using your body and putting it on the line each day, waking up at 9 AM and repeating the process every day. On a band trip you don’t do shit all day except sound check and then the show. The band guys are hungover and think it’s rough. Those guys don’t know how rough a skate tour is so a band trip is cakewalk for me.

Could your band mates ever survive a Toy Machine tour?

Never. I don’t think most skaters could survive a Toy Machine tour. 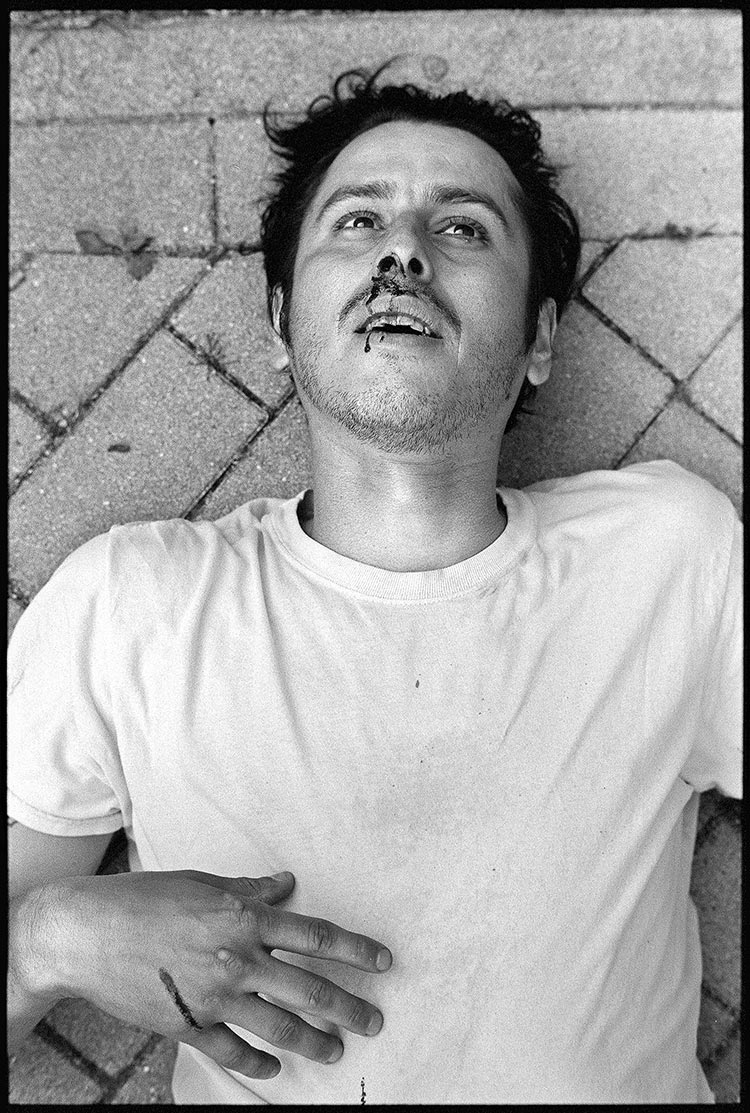 I think you are right. How much longer do you think we are really going to do this for?

Until the budget is totally fucked.

If you are SOTY, you are on forever even if the budget is totally fucked. No SOTY is ever getting the boot.

So that trophy is my resume to just get on another company even if Toy Machine ever goes away?

Does that same thing apply in the real world when I need to get a real job?

Nope, but give it a try. Shit changes all the time in the real world.

You think I can just walk into a Best Buy and put my SOTY trophy on the table and everything is going to work out?

If you could bring back one OG Toy Machine team rider, who would you bring in the van?

I would bring them all and do a reunion tour.

We tried that and Jamie Thomas wasn’t down.

I don’t know. I can’t remember.

Well, I’m going to use this interview to call him out and tell him welcome back to hell. Get back in the van, Jamie.

Let’s do it, Jamie! What’s going into your part that’s different than your last video parts?

I’ve never really felt good about a part. I just wanted to film a little differently for this part and not stress over it.

How much longer do you think we are really going to do this for?

Until the budget is totally fucked.

Any words of wisdom for the kids?

It’s all fucked up out here. 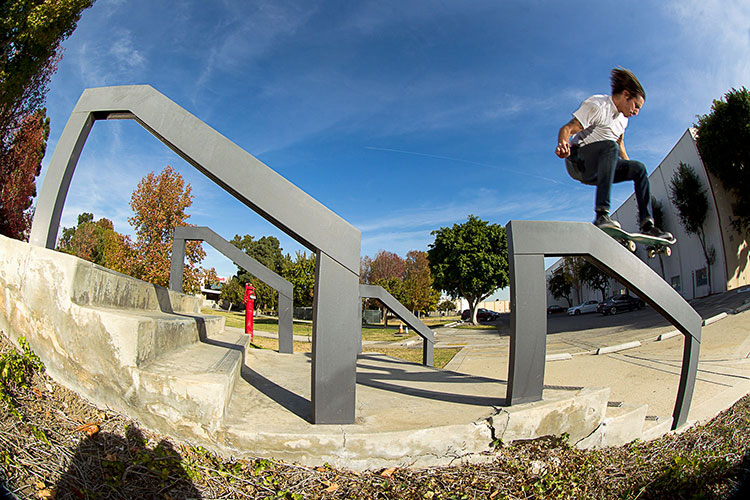