To quote Charlie Blair, “At home we all have our families, but on the road we are our own family. And nobody fucks with my family.” This road family he was referring to consisted of the following guys: Eddie “Mighty” Moreno, Jarren Duke, Corey Blanchette, Hollywood Martinez, Terry Larue, Deville Nunes, Charlie himself and me, Micaiah Furukawa. So there we were, the Powell-Peralta fam, together for our second annual Let’s Go Skate! trip with ten destinations in nine states, crammed into 16 days. The purpose of this voyage was to skate with local rippers at their skateparks—and that’s just what we did! 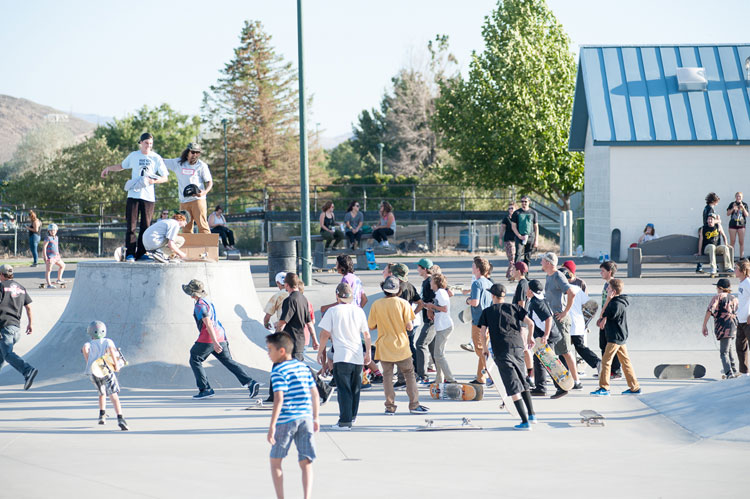 Once in a while, I would catch the guys throwing a shirt or a hat at a kid like it was a fastball in a baseball game. Thankfully, they didn't do that with the decks 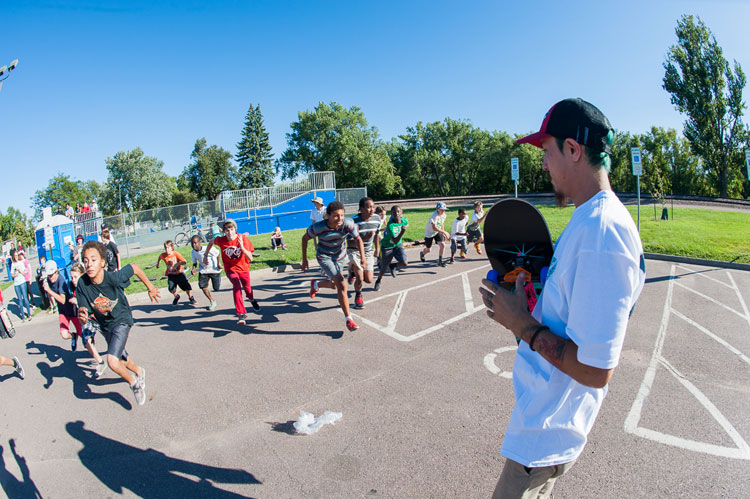 The BayOne of the first stops was at The Bay in Lincoln, NE. We skated in the packed park for a couple of hours and then pushed down the road to hit a mini ramp at the University of Nebraska-Lincoln. There was a big party going on and we sessioned in front of hundreds of college kids while music blasted so loud that it was hard to hear each other talk. Hunger set in and we decided to go find some food. We mashed through the crowds of students, weaving through tight spaces, ollieing up curbs and going down staircases. It felt like that scene in Future Primitive where the Bones Brigade is cruising through NYC. Shout out to Jarren Duke for landing a sick-ass 360 impossible! 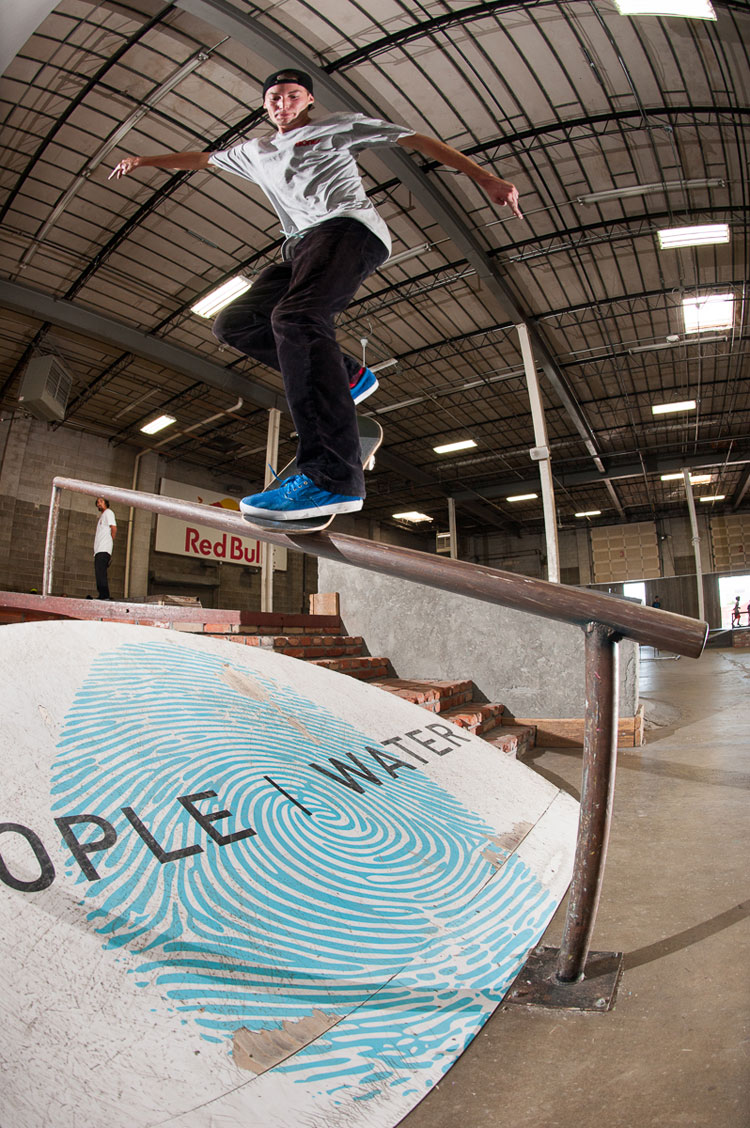 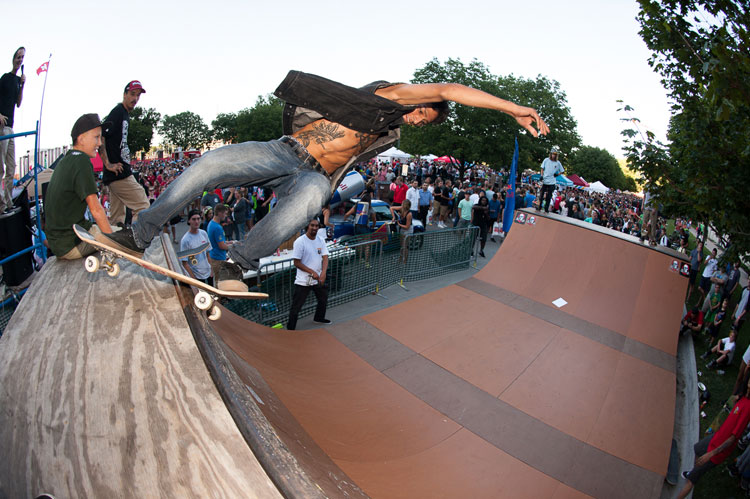 Hollywood brought a storm to the mini ramp session. The crowd was going wild for him. Hurricane 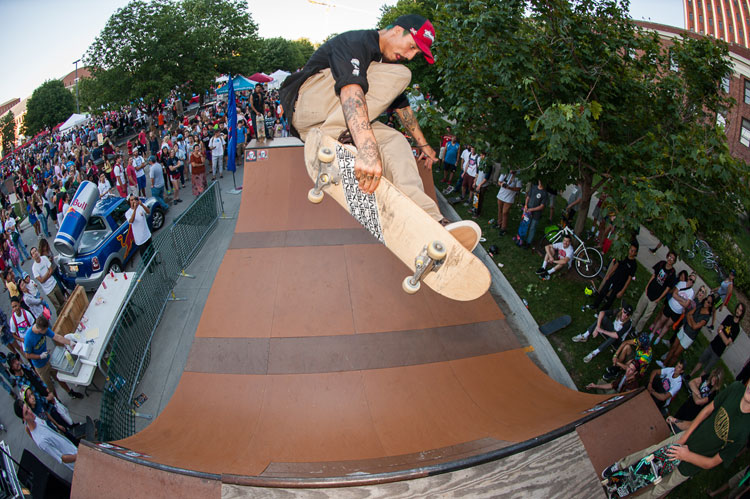 Charlie showing the college kids his version of higher education

Hidden GemsWe got invited to skate at two private parks. Both were tons of fun, not only for skating but for hanging out, too. Mighty would DJ and blast the Fredo Santana. Hollywood and Charlie are maniacs and flew all over the place, including the walls. When the guys got tired, everyone would hang out outside the park and have some drinks, joke around and light off fireworks. After one session, we went to a diner and things got pretty hectic. Charlie started reminiscing about a previous food fight and decided to pour salt all over Jarren's beanie. Then all hell broke loose: fried shrimp started flying through the air, grilled veggies were bouncing off of customer's heads, sugar packets were being poured all over the place. Eventually, the manager came over to our table and told us to stop or leave. We were done eating so we split. 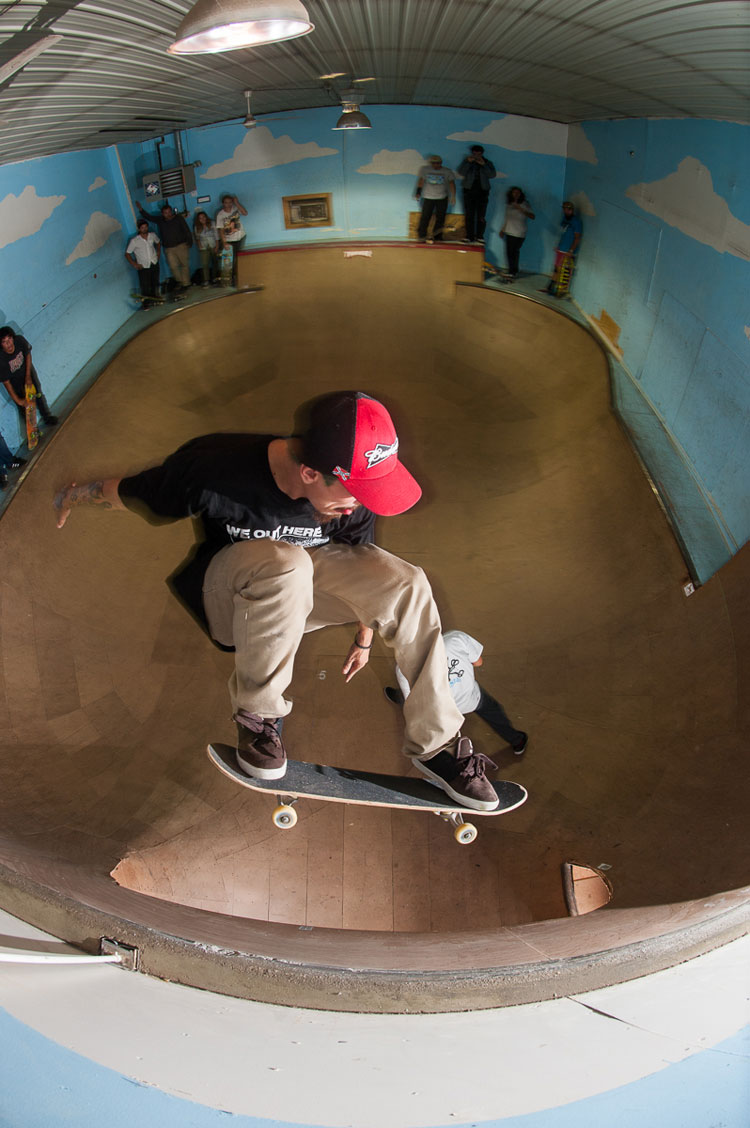 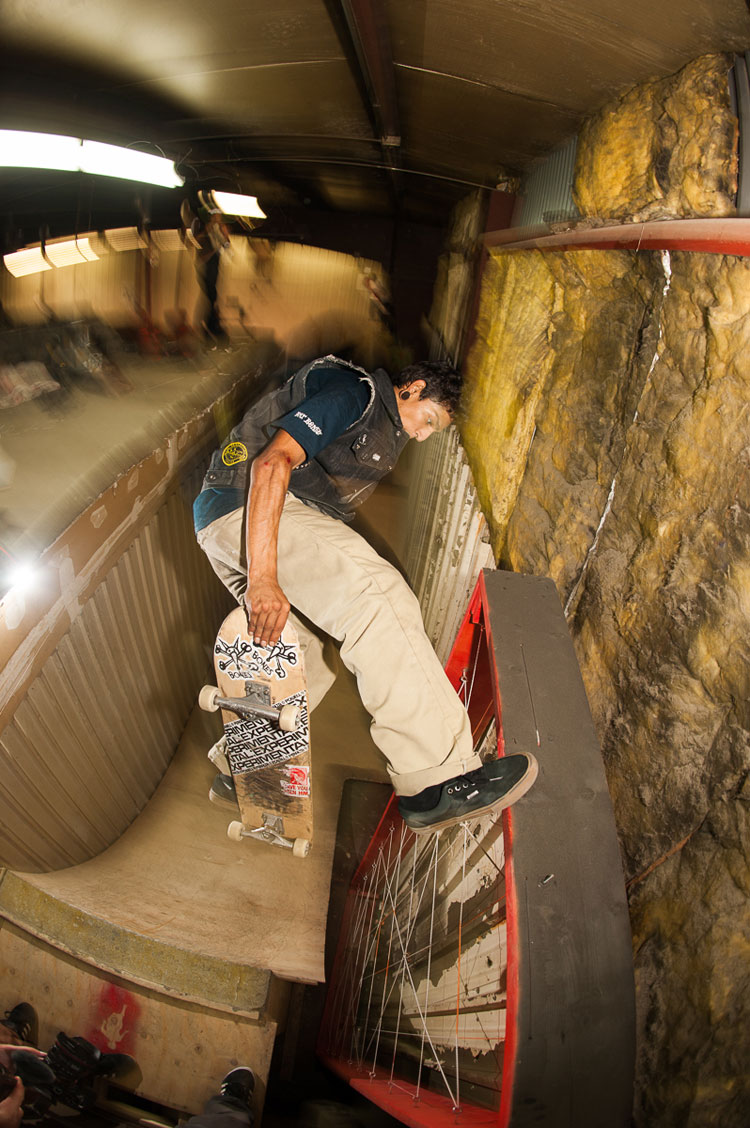 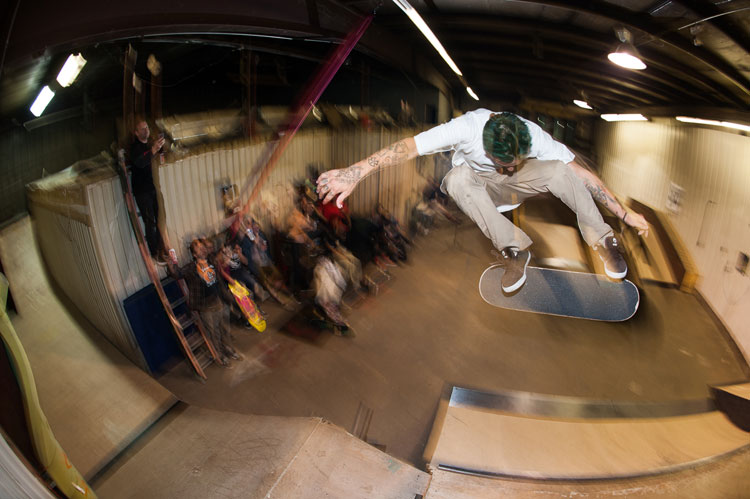 Charlie with a banger of a backside flip

The 3rd P stands for PartyCan’t have a family road trip without some partying. The guys raged at nearly every stop, either at the hotel or somebody’s pad. One night we stayed next to a golf course and Charlie and some of the team went out exploring. They saw a drunk dude in a golf cart weaving around the course and asked if they could take the thing for a spin. His reply was, "Yeah, go crazy," so they did just that. Charlie said it was like an episode of Jackass: almost slamming into trees, flying off bumps, people jumping out, pitching sideways on two wheels and eventually crashing the thing. He relayed this story over a greasy McDonald's breakfast which didn't help with their hangovers. 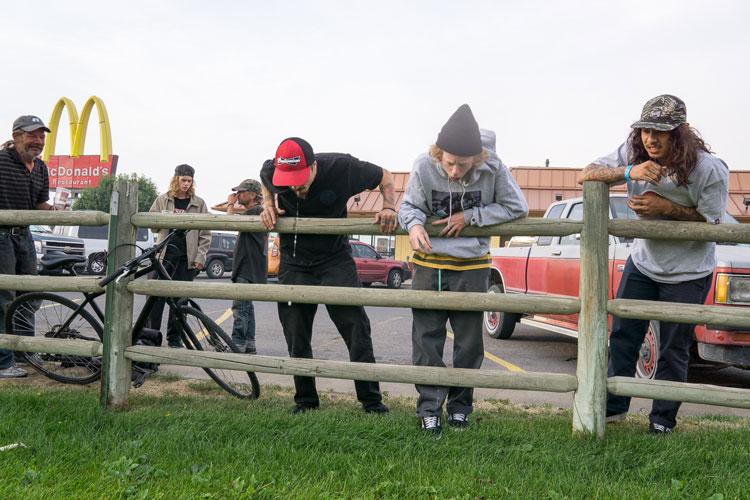 Brakes, breaks, and breakupsThere were a lot breaks during the trip: Corey messed up his knee, Mighty popped his shoulder out of its socket and dislocated his finger and Hollywood smacked his head. One of the guys broke up with his girlfriend during the trip, too. And it may not be the same break, but our brakes began to crunch on the twisting mountain roads 100 miles outside of Montana. But the most memorable break goes to Mr. Charlie Blair. Here’s how Corey remembers it:

“My favorite memory from the trip is when we stopped to eat in Texas. We were inside waiting for our food and Charlie comes running in saying he's about to footrace a football player for five dollars. So we all run out real quick to see him race this fool, and there's like 40 people watching. So they start racing and the footballer gets a head start. Charlie was trying to catch up, trips and eats shit and slides, like, five feet on his hip. He takes it like a boss, but he’s out five bucks so he tells the guy, "Double or nothing," and gets smoked again! Good times!” 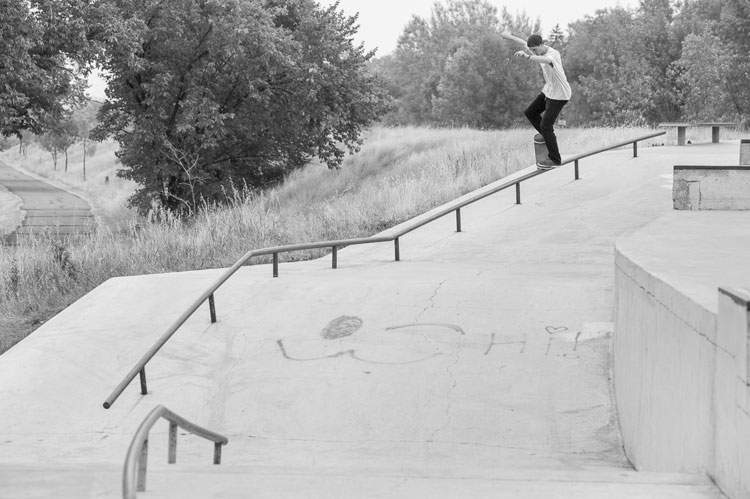 Corey likes his rails long and mellow. This one was just asking for a crooked grind 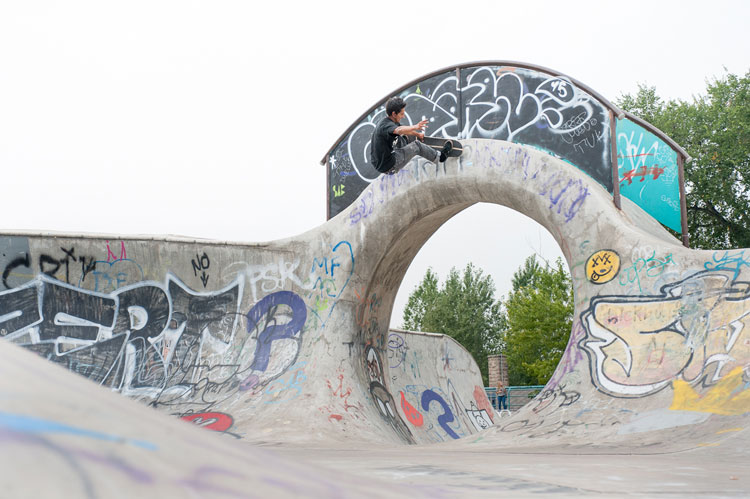 Death-defying FSA. Hollywood made it extra sketchy by landing just above that yellow face 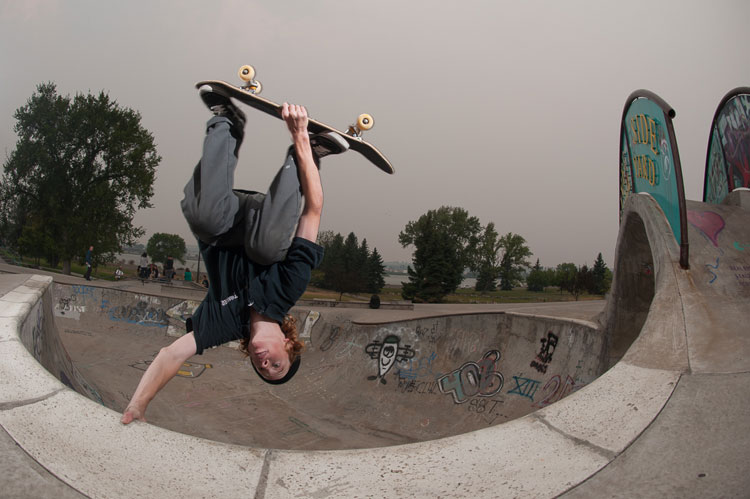 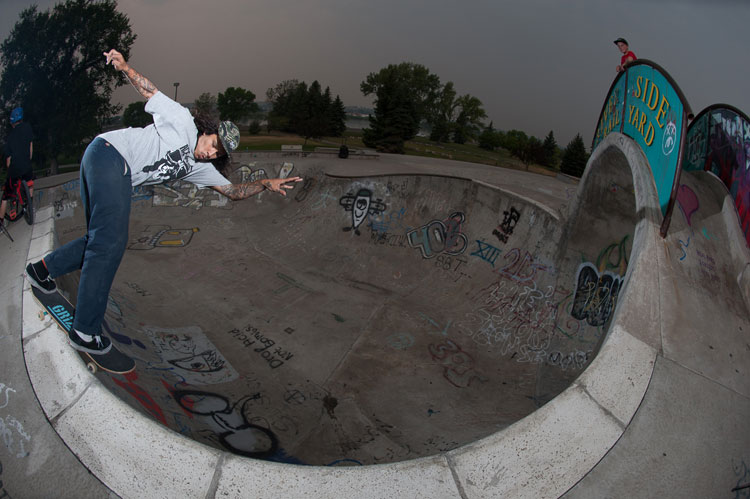 An injured shoulder won’t stop Mighty! Back Smith in the corner pocket 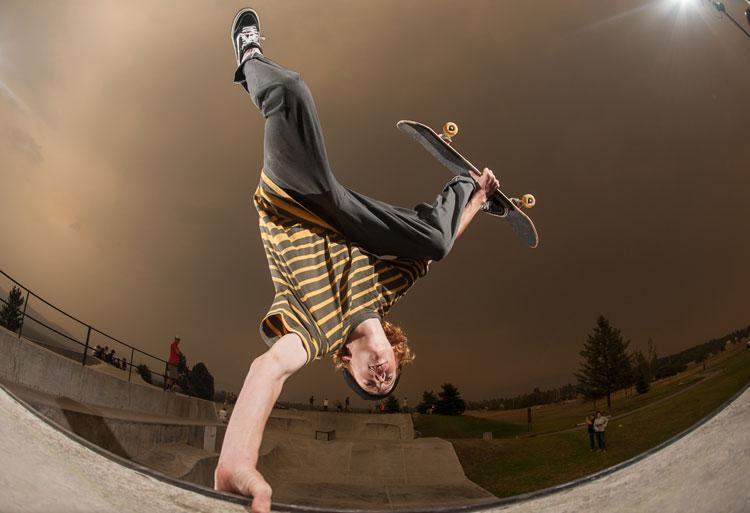 Jarren, one-footed invert under the fiery sky of Whitefish, MT 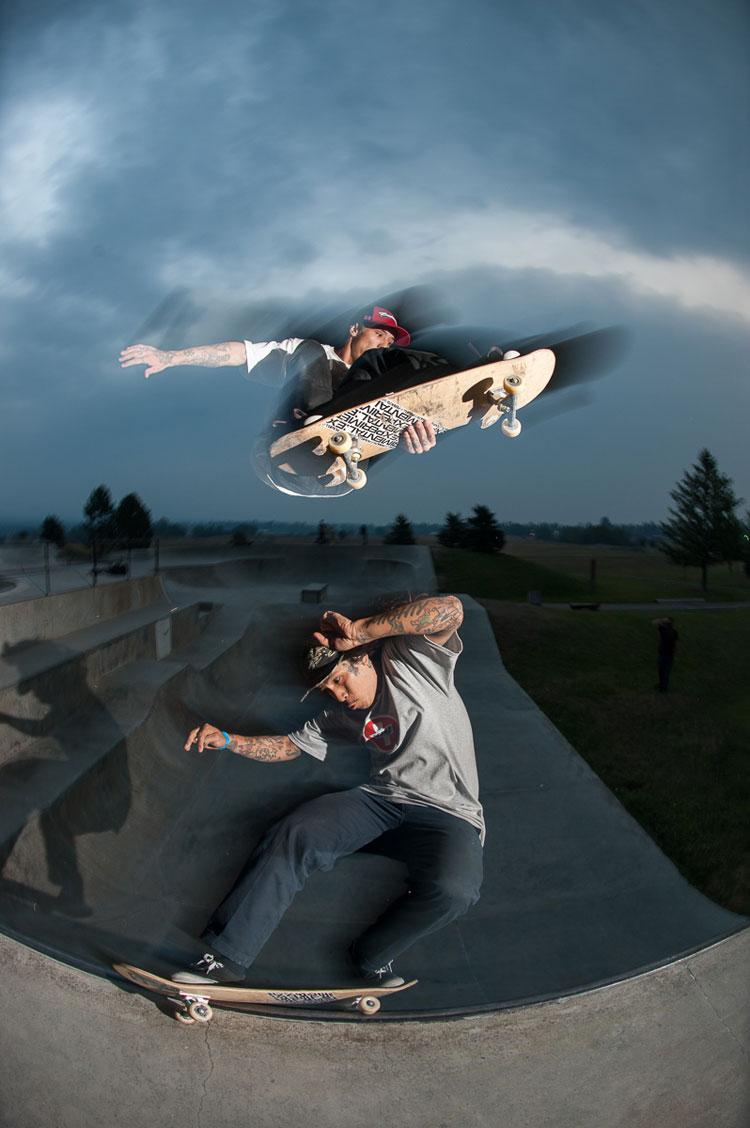 Charlie and Mighty, doubles to dislocated finger to get back up and do it again

Out in IdahoIdaho was sick! The Fort Boise skatepark had a good turnout and after the session, Paul from Prestige Skateshop invited us to come skate his backyard bowl. We pulled up to his house and walked into his backyard. There were Christmas lights draped over the patio, perfect green grass, a big jug of water with sliced cucumbers in it and one of the greatest backyard pools I have ever seen. Paul had two dogs—one played in the grass while the other stood at the deep end and barked at us while we skated. This session had a great vibe and I"ll remember it forever. Thanks for the invite, Paul! 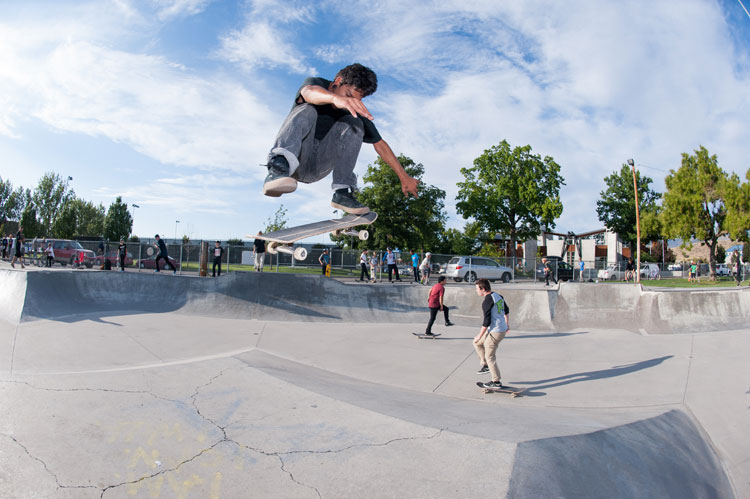 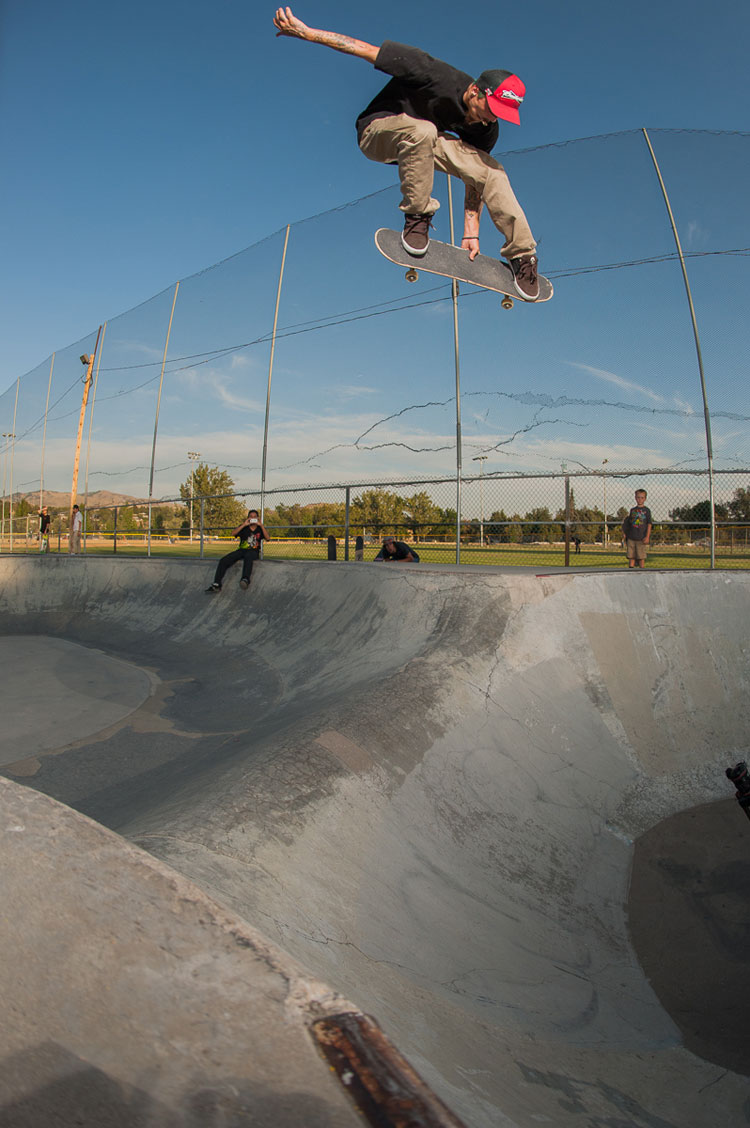 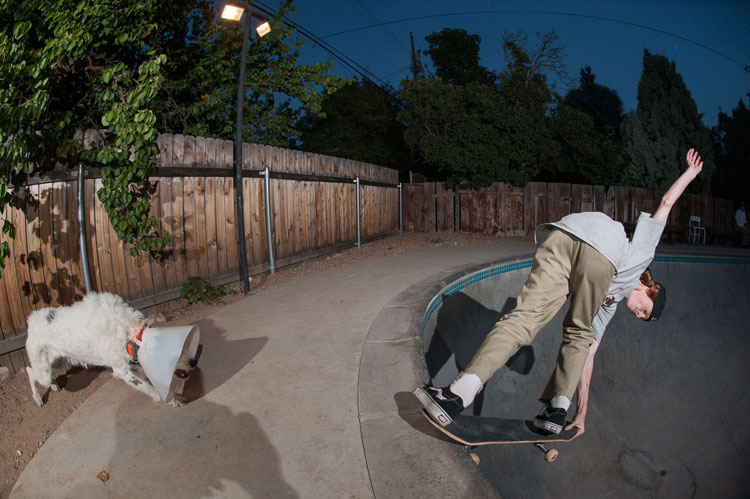 Jarren back crailslides while Paul’s dog cheers him on 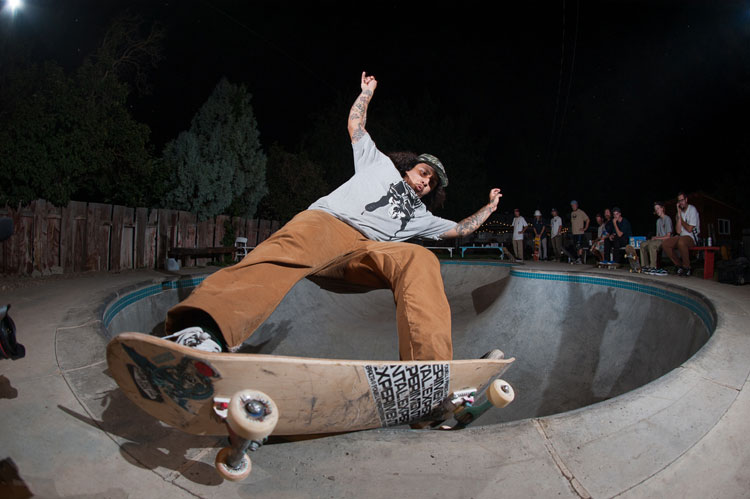 Mighty, hurricane to fakie for the fam! 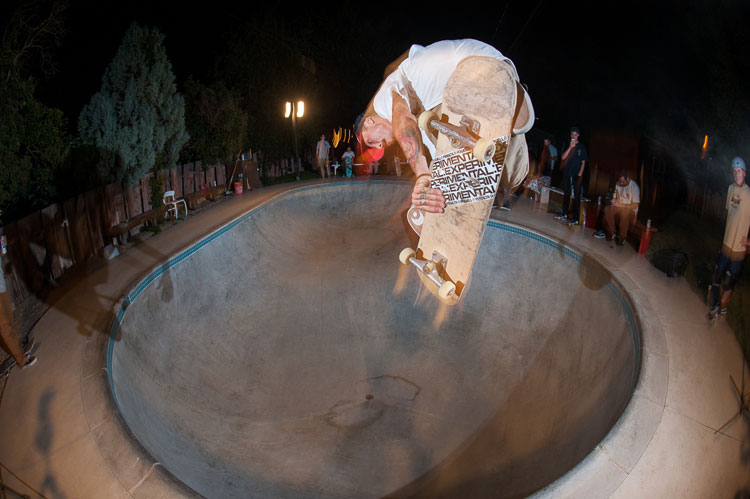 Reno!We were invited by a friend to skate a backyard DIY, so we followed him out of the city and into the desert. We turned off the highway onto a dirt road and headed behind some hills, joking that he was leading us nowhere and was going to rob us. Nope. His backyard DIY was small but incredible! We sessioned it for awhile and then—BOOM! Some of the boys discovered the shooting range.

Later that evening we drove over to Rattlesnake skatepark. It was huge and packed. The guys mainly focused on the nine-foot vert wall. Jarren got a backside crailslide and Charlie went to town on it with a blunt to fakie, bump up to frontside nosepick on the side and a tail drop off the railing. As the sun went down, everybody gathered in the parking lot to say goodbye. We piled in the van and honked our horn as we drove off into the night.

Thanks to everyone that participated in the Let's Go Skate! trip. Cheers to the Skully Club! 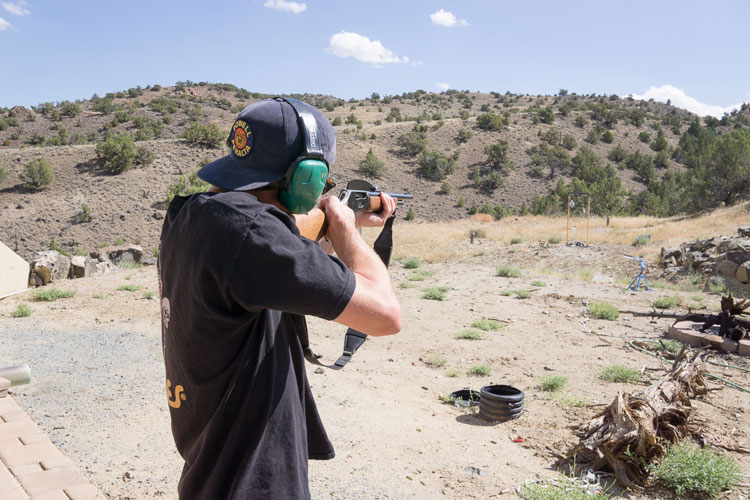 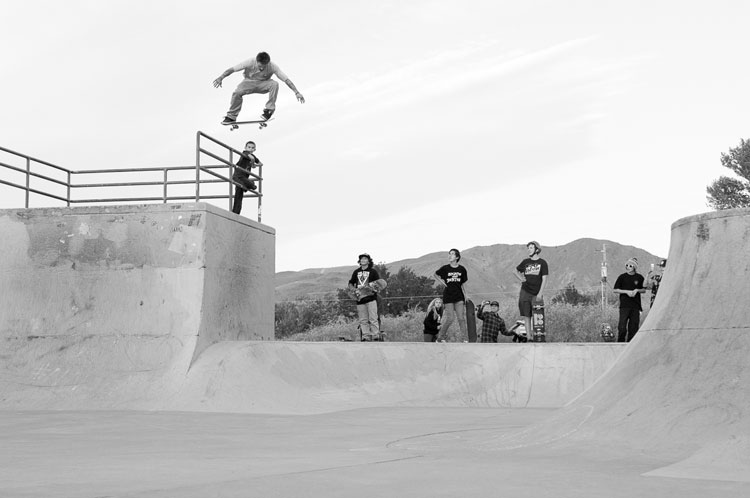