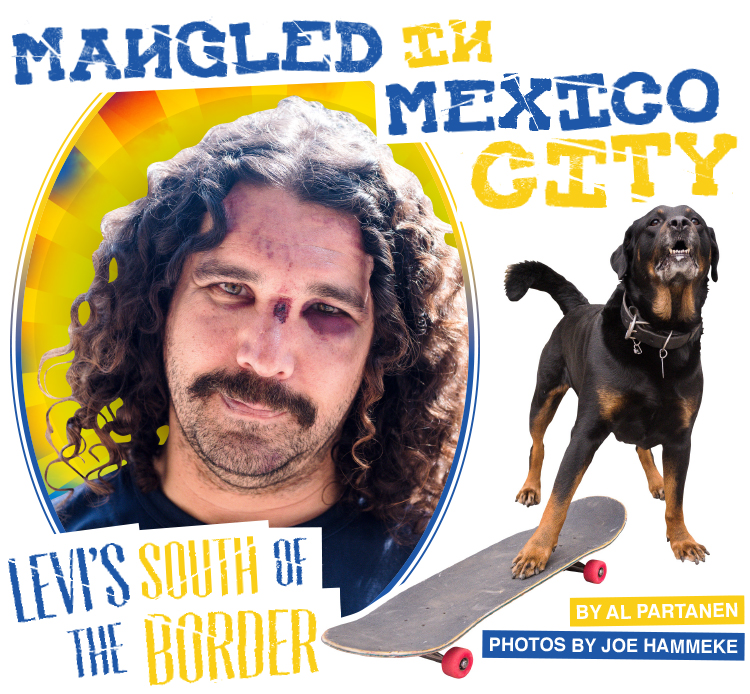 I was exiting the bathroom, high on mezcal, when I got blindsided by some slick hustler type. It was our second night in Mexico City and Marius and I had gone out for a chill evening. Unfortunately, I decided to keep the party going solo style after the bar by our hotel closed for the night. So there I was, by myself in a sketchy warehouse club in downtown MC, getting my head stomped and kicked like a soccer ball. It was straight-up brutality! After I managed to get to my feet, I found myself face to face with a squad of cartel thugs. I yelled at the main dude, “What the fuck was that for?!” His response was to pull out a pistol. I shouted out the dumbest thing I could think of: “What the fuck are you gonna do with that?” And then—WHAM—I got pushed out the door by the security dudes who I assume watched the whole thing go down. It was the middle of the night and I was on the street alone, a bloody, mangled mess. I hailed a cab to take me to a hospital because my face wouldn’t stop bleeding. On the way, I decided to call Marius to tell him what had happened. I frantically searched my pockets and realized that my phone was gone. The thugs had stomped it out of me. 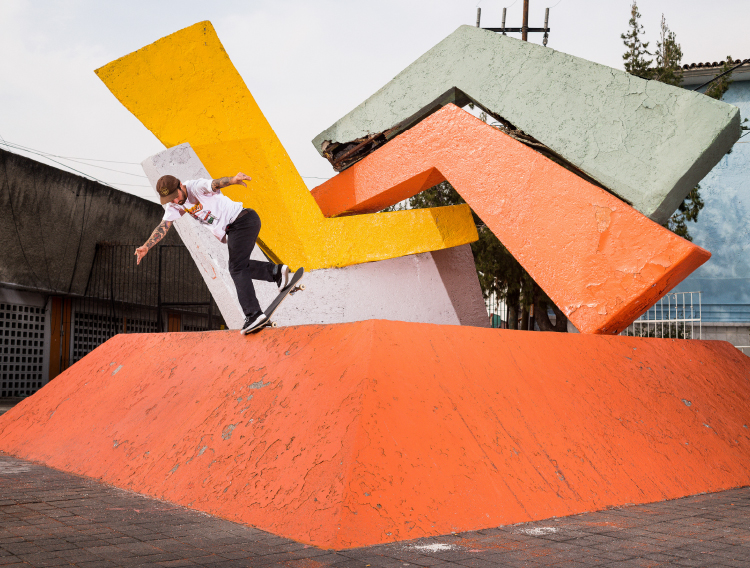 It’s rad how the colors of this photo reflect the warmth and culture of Mexico City. I wonder what color would represent the crew of derelicts who were smoking glue at this spot? Dan Plunkett, backside noseblunt slide 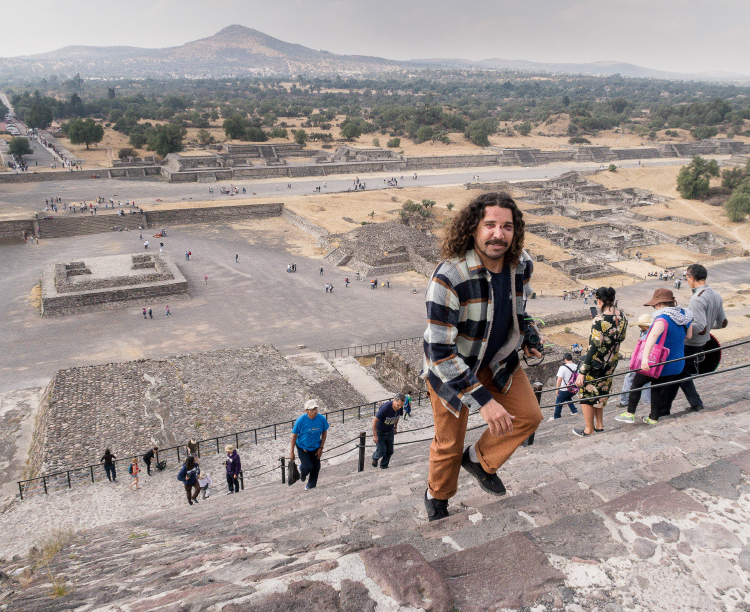 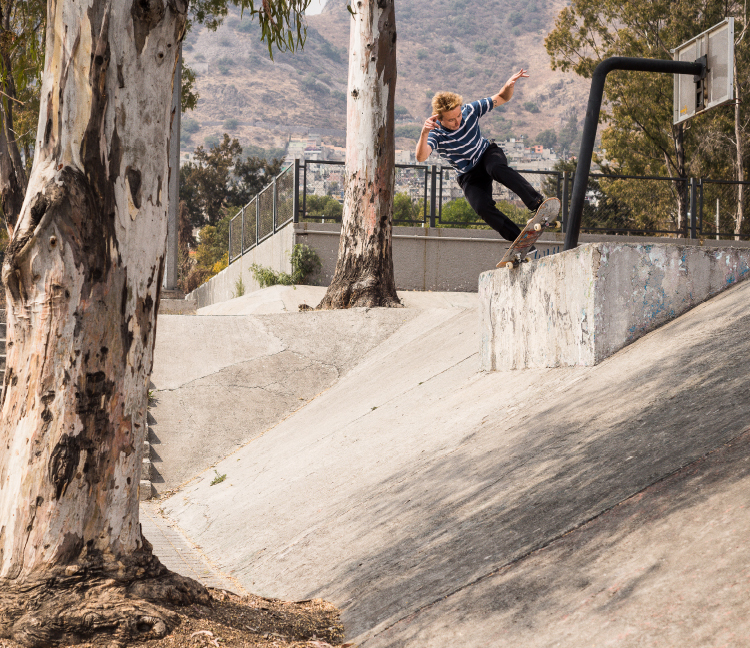 Mexico might have some financial issues but their banks are doing just fine. Marius, pivot pop out to fakie

I asked the driver to circle back to the club so I could try to retrieve my phone. No dice. It was gone. By this time my face had stopped leaking, so I hailed another cab and tried to make it back to the hotel. The driver didn’t understand my directions and took me to a completely different part of the city. He had no idea what I was saying, so I got out of the car—ready to lose my shit—and started walking down the early-Sunday-morning streets. It was one of those moments that hits you like a turd sandwich. I screamed into the cold, lonely avenues but they couldn’t give a rat’s ass. I regained my composure, wiped some of the blood from my face with my t-shirt and walked around a corner where I found a kindly man who translated my destination to yet another cab driver. The sun had risen by the time I finally made my way back to my room. Luckily, tricks were the only thing getting stomped out for the rest of our stay in Mexico City.  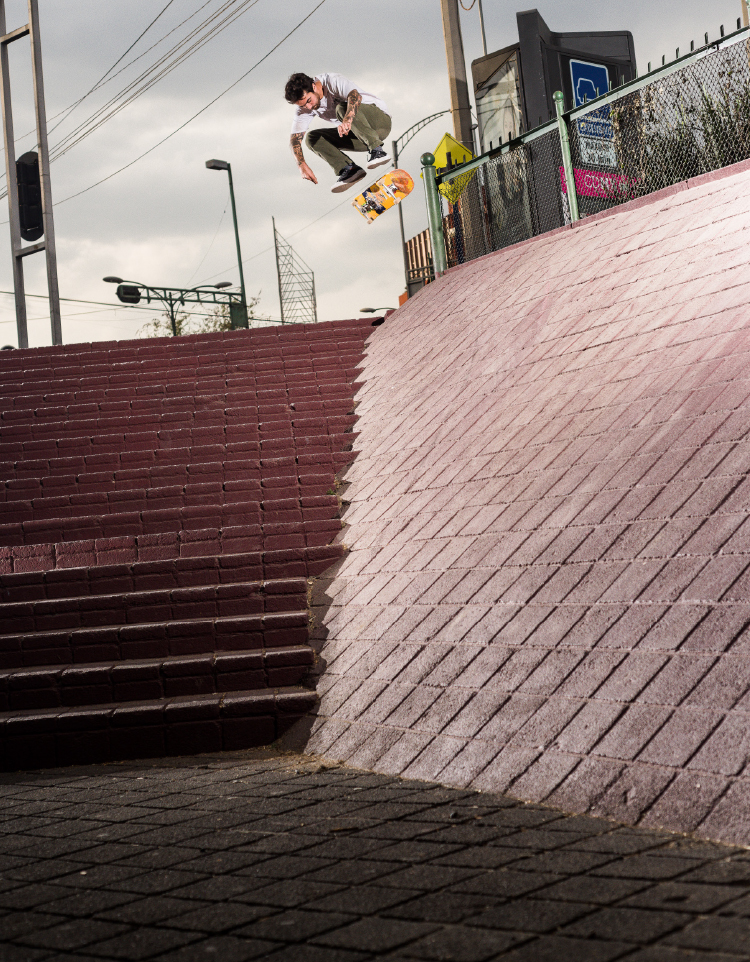 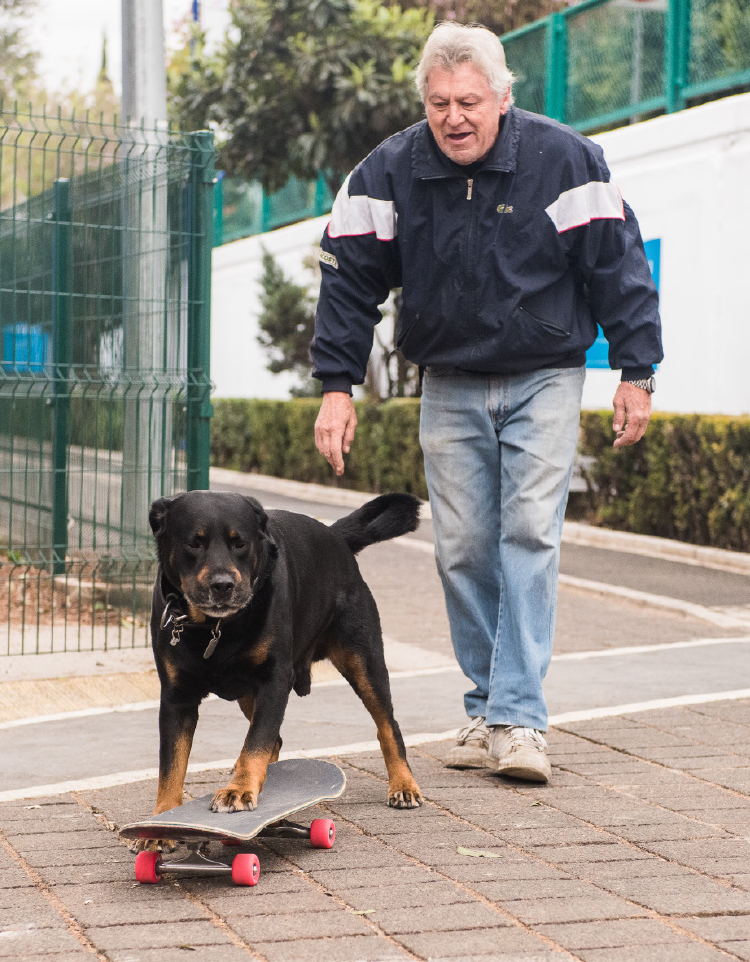 Who let the dogs out? This guy, apparently 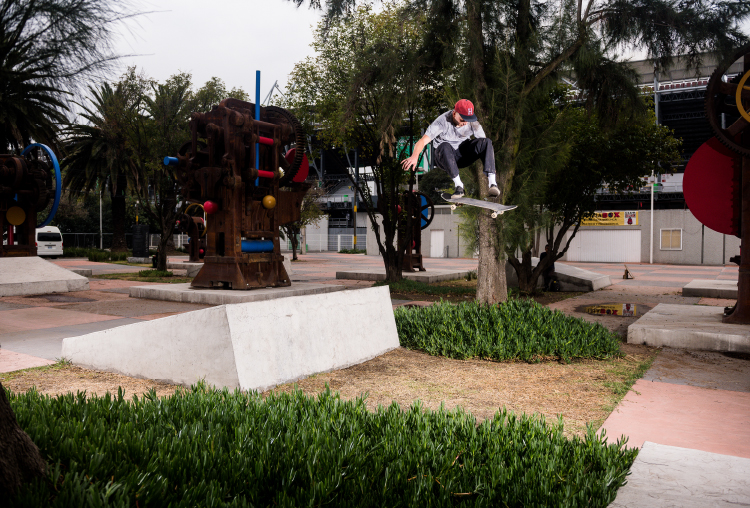 Before leaving for this trip, Ewan Bowman told me about a mystery fullpipe in the mountains and I knew we had to skate it. We broke free of the city and headed to the hills to find the sacred spot. As we entered a narrow valley, we saw a dark hole in the mountainside. I was shaking from excitement as we got closer and the gigantic pipe revealed itself. We were all buzzing as we entered it and headed towards the light on the other side. These type of spots are our pyramids. We’ll travel across the world to ride them, sometimes in places where few humans have ever set foot. The surface was pretty rough so we abandoned our regular setups and took turns riding Ewan’s cruiser board. We struggled at first just to hit nine o’clock, but then out of nowhere Marius got fired up! He slapped a sticker for P-Stone at ten o’clock and a few turns later—BOOM!—he snapped the fattest backside ollie. Cosmic waves were ridden and levels were attained. The Skate Gods were definitely smiling down upon us that day. 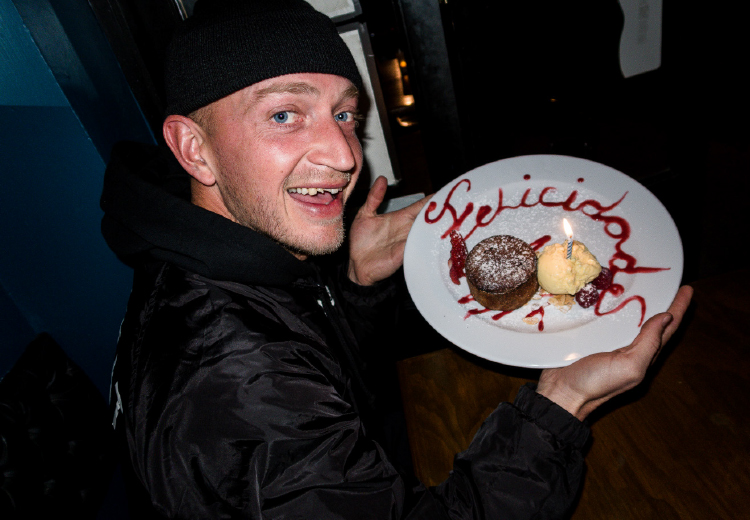 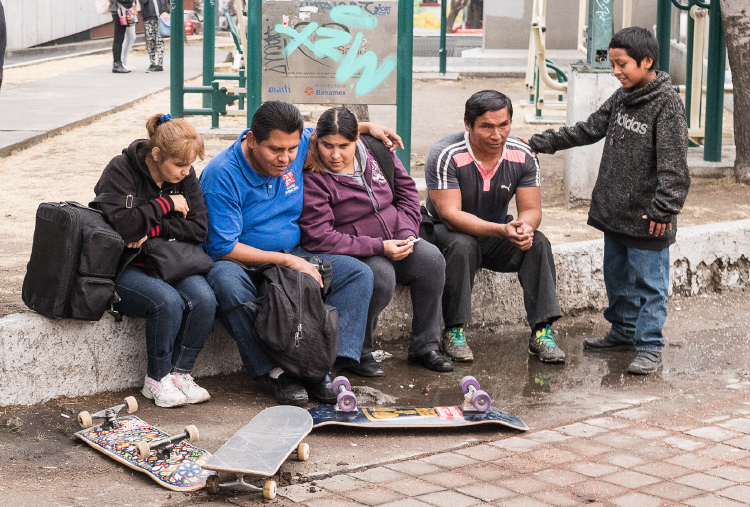 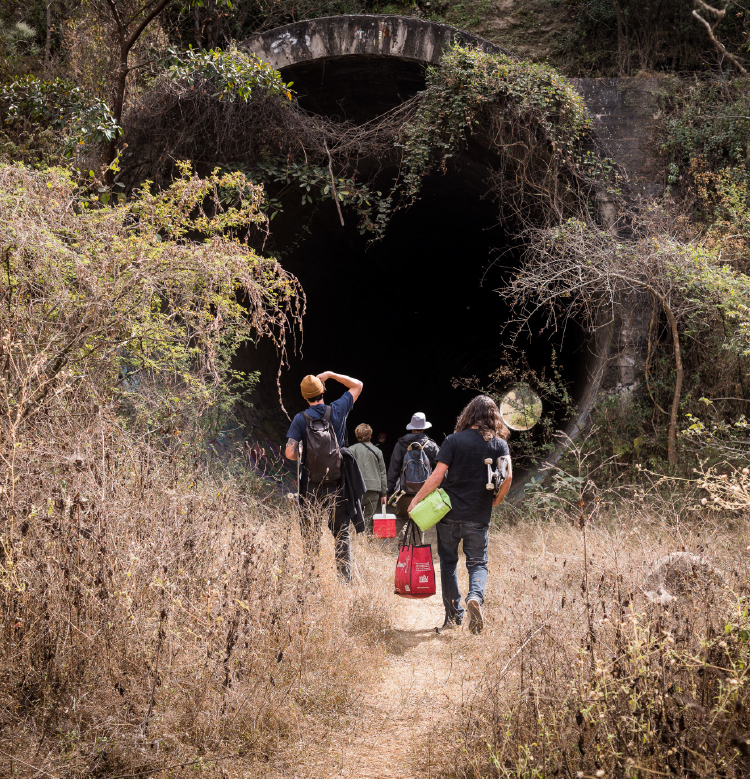 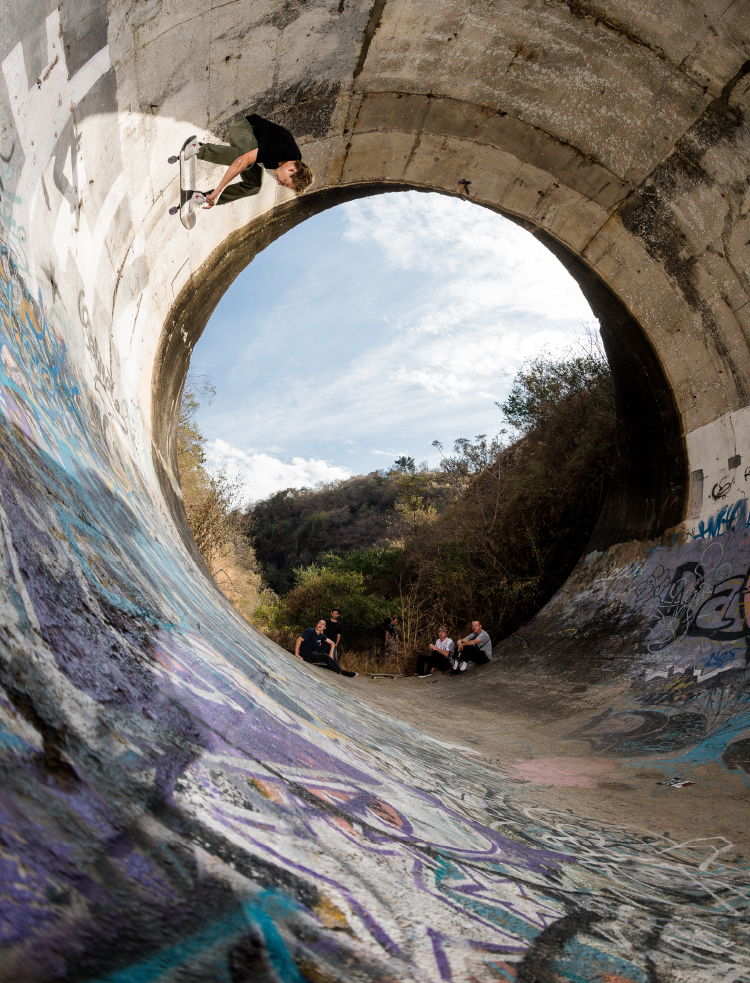 Govs cracks the code with a monumental BSO in no man’s land. Skate Gods rejoice! 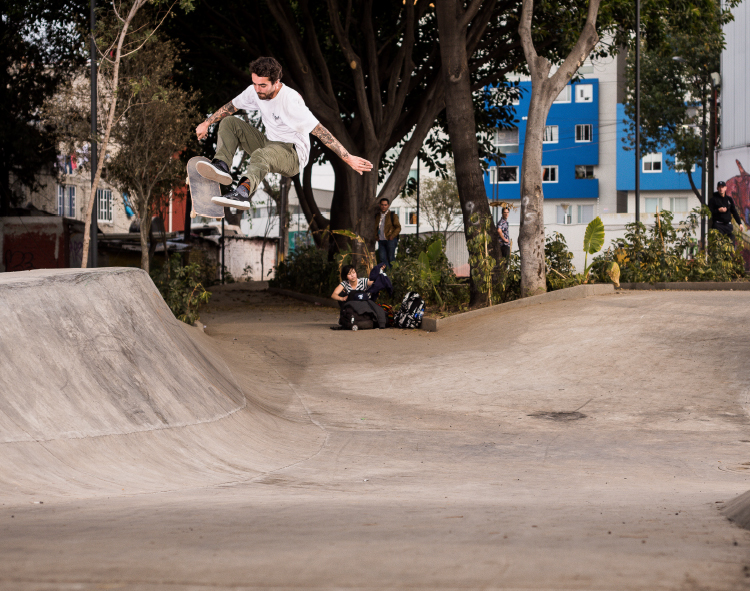 Dan Plunkett’s feet grab one for the road at the Corona brewery. Kickflip 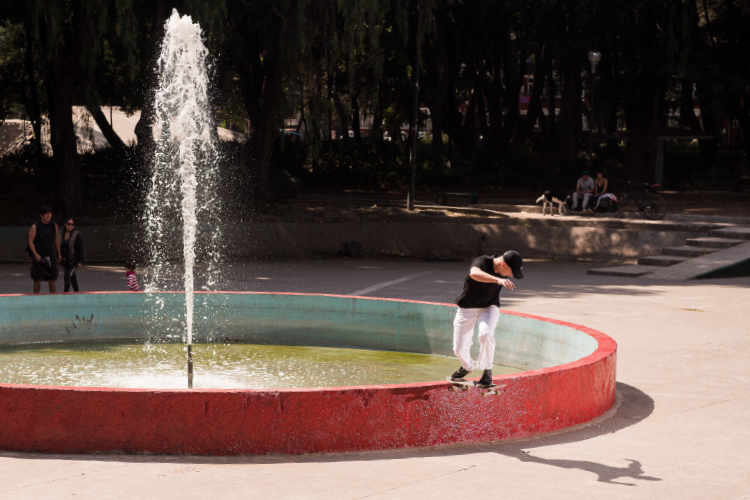 Josh knows to avoid the water in Mexico. Back tail 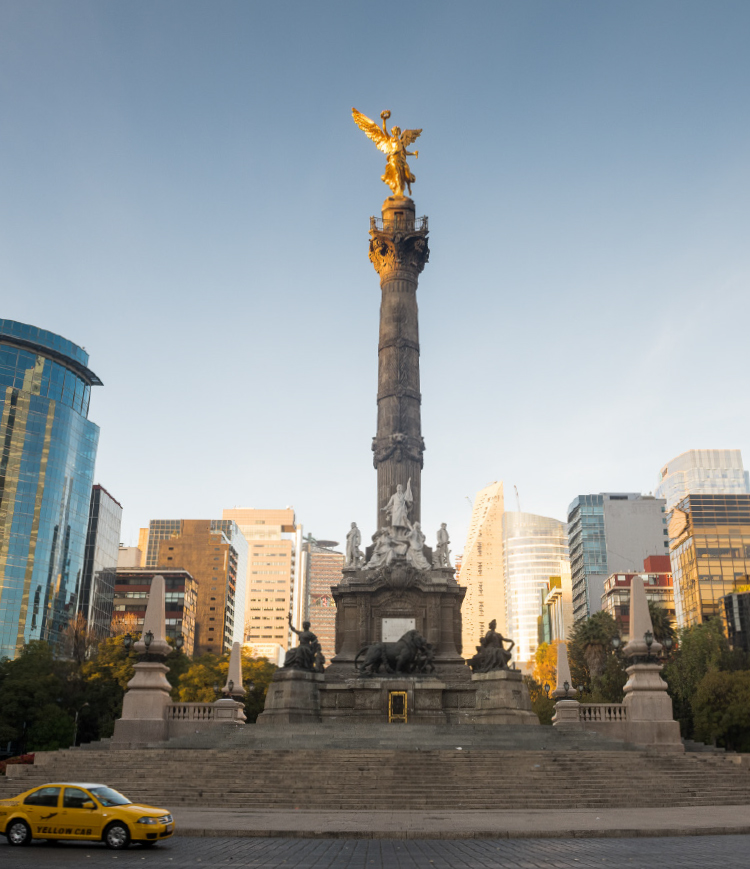 Despite nearly getting smoked, this trip with this crew south of the border was one for the books, our fullpipe mission pretty much sums up the vibe of these epic excursions: get your crew together, go on an adventure, find, visit (and sometimes build) your monuments, pay your respects, make offerings, leave blood, have fun and keep moving. Thanks, Levi’s and Thrasher, for allowing us to share the stoke! 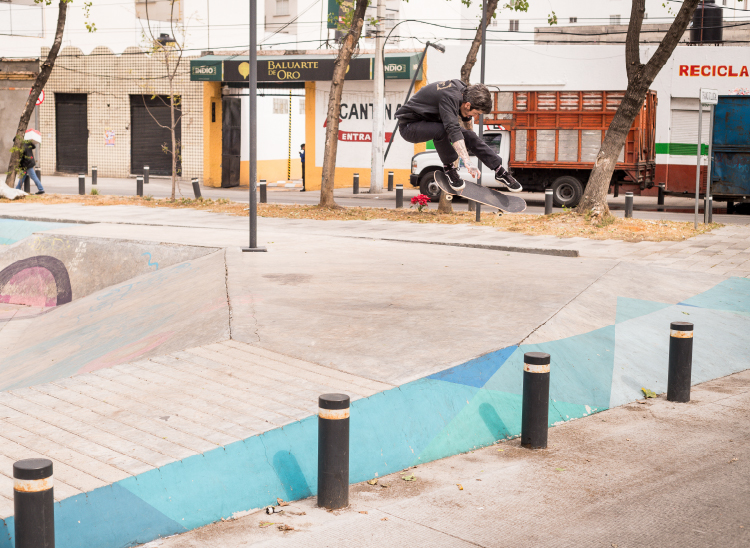 Our man on the ground was also our guy in the sky. Levi’s Mexico team rider, Max Barrera, kickflips for the home team. Adiós, MC. Thanks for the brews and bruises