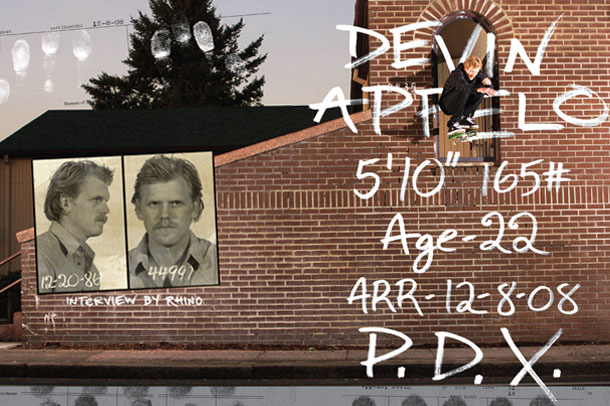 Devin, how old are you and where are you from?
I’m 22, and I was born in Palm Springs, CA, but I moved to Oregon when I was two so I consider myself an Oregonian.

How’d you get into skateboarding?
I had an older friend that skated next door, and I asked my parents to buy me a board for my 10th birthday.

Do you remember what kind of board  it was?
It was a shitty Nash board.

Who were some of your favorite skaters when you started shredding?
Just my older friends, and the older dudes  at the park. I never watched skate videos when I began skating.

Who was the first pro you saw skate  in person?
It was Nate Sherwood at the Vancouver skatepark in Washington. That was funny  to watch.

What about these days?  Who inspires you?
Al Partanen, because he’s fucking almost 40 and he skates harder than anyone else out there. Geoff Rowley and Bob Burnquist, because they’re ripping and they’re older, too. And all the dudes on Creature, because they’re so much better than me.

Bob’s part in the new Flip vid is ridiculous. Have you ever thought about skating the Mega? Lizard King jumped that shit.
I really don’t understand how he does that. I’ve thought about it, but it just isn’t for me. Lizard King has health insurance.

What was your first photo in Thrasher?
A Photo-G picture that Hammeke took.  He wrote his alias for the credit because he didn’t want anybody to know. After that I got  a Lunatic Fringe. 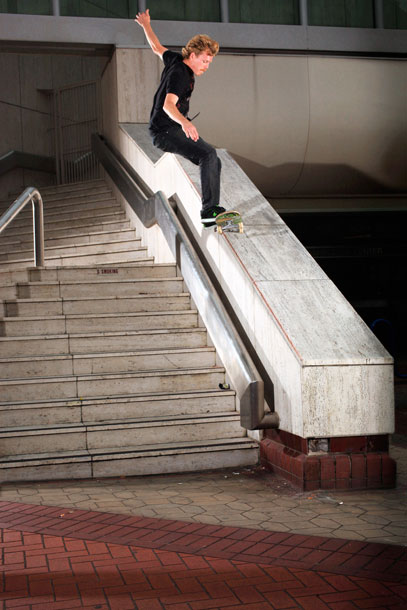 When did you meet Gravette?
I met David when he was 16, through my old shoe sponsor, Duffs. It was at a contest at an indoor park in Portland; we were both hyped on each other’s skating so we became friends.

He’s always been a bit absent-minded, but is he getting worse? Maybe it’s the spliff life that he’s leading.
I would say too much weed, too much traveling, and not letting himself heal.

I always tell him to take a vacation and relax, but he can’t do it. I’m sure the pressure of filming a video part or two at the same time can be overwhelming. You’ve also been filming for two videos, the Thrasher video and for Creature. Has that taken a toll on your body and mind?
My body is fucked. My heels are bruised, my knee and my hip are swollen, and my hernia hurts all the time.

These will be your first video parts.  How do you think you’ve done?
I’ve done the best I can do; I think it’s good, so I hope everyone likes it as well.

Which part’s going to be better, Creature or Thrasher?
My Creature part has mostly older footage, and my Thrasher part is mostly this past year. They’re both going to be rad.

What about Gravette’s part?
His Thrasher part is going to be good,  but I haven’t seen much of his Creature part. I’m sure they’ll both turn out gnarly as hell.

Are you going to chill for a bit after the videos drop?
I’ll probably chill for a few months and then get back to it. It all depends on if I need to get a real job or not.

You tend to tackle some big gaps. What’s the gnarliest thing you tried for an ender that didn’t work out for either part?
The gnarliest thing I tried to get for an ender would have to be an ollie over the Clipper hubba for the Thrasher part. We went there around noon, and we had to bondo a lot of big cracks at the top so I could skate it. P-Stone went to get me some beer for breakfast, for a bit of confidence. The first attempt wasn’t too successful. I landed on my heel and bruised it pretty badly. I ran back up and tried it again, stuck it, and slammed. Someone offered me $1,000 dollars if I landed it on the next try; stuck it and slammed again. My heel was too fucked to try it another time after that. 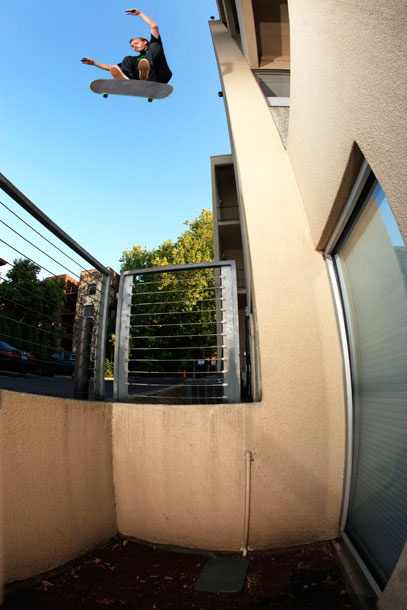 Got plans to go back and get that shit?
I’ll probably try it again for another part, when I’m not so beat up.

Would you have given the Leap of Faith a go if it was still skateable?
I probably would try it, but that one doesn’t look too doable. It’s fucking gnarly.

What about the set of stairs that Phelps put on the Web, with $1,000 to the first person to ollie and document it?
I went there, and there’s no way it’s doable without a tow-in from a car or something.  It’s just too long. But I’d try for shits if he  put up $10,000.

What’s the worst injury you’ve had  to date?
I shattered my elbow on a stupid five-foot quarterpipe when I was 17. I had to get a seven-inch rod put in my arm. Having a  hernia sucked, too.

How’d you get a hernia?
Probably from not stretching. Or it could have been from lifting at my old construction job.

You’re in Portland now. What are the good and bad aspects of living there?
There’s nothing bad about Portland. Everywhere else sucks compared to it. Beer’s cheap, food’s cheap, and there’s so much shit to do all the time.

Why Portland instead of San Francisco?
Because SF is too fucking expensive.

Does skateboarding pay the bills?
I don’t work. I get a little money from  skating, but I have to sell lots of my boards  to make rent. I have a food card now, so that’s how I eat.

It's real easy to break your collarbone doin' shit like this

Maybe after the two videos drop  your checks will get bigger.
Checks? That “s” on the end would be  a nice addition.

Did you finish high school?
Hell no! I didn’t really get along with  the teachers.

If you had to work, what might you  do to support yourself?
I’d be a bartender, most likely.

Who drove the car into Burnside  and flipped it?
I think it was Andy 540. Not too sure.  I didn’t even know about it ’til I saw it on the Thrasher website.

Have you ever gotten vibed at Burnside by any of the locals?
When I was younger, but not too  much anymore. 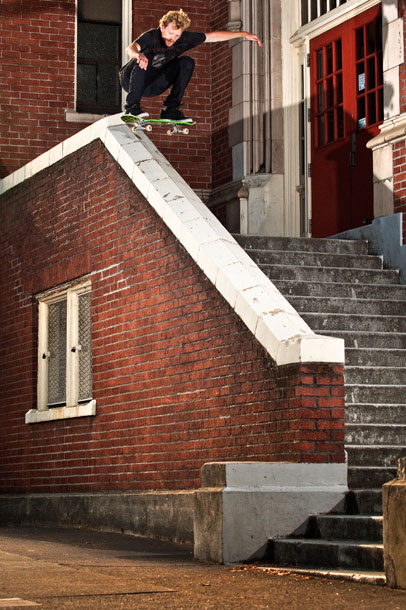 What’s the gnarliest thing you’ve seen  go down at Burnside?
When Germ beat the shit out of this bum, pushing him backwards down the trannies. The guy landed straight on his dome. His  head was split wide open. I booked it after that. I didn’t want to stay around; the dude looked dead to me.

That’s a gnarly one. What about the gnarliest skating there?
I would have to say Choppy Omega,  Red, or Little Jon. They try things that  don’t look possible—and make it.

Last year, your brother got beat up pretty badly. What happened?
I wasn’t with them. My brother, Taylor, was with our friend Clay. I got a call from Clay at four in the morning saying, “I think your brother’s dead.” I guess some UFC Chads walked up to them, telling them to stop smoking crack. My brother and Clay told them they were waiting for the train. The Chads wouldn’t leave them alone; they kept saying that they were looking for a fight. They started pushing them around so my brother hit one of them in the head with his board. They were eventually over-powered by the four Chads, and Taylor was beat with his own board half to death.

360 flip under, high jump over

How old is your brother?
Twenty. He got all of his surgery done, and he’s got himself a fake grill now. He just drew Gravette’s new graphic, and he’s getting some of the money from every board sold to help pay for his medical bills. So buy that shit to help him out.

You’ve hosted some fundraisers for him, too. How’d they turn out?
They turned out well. I raised enough money for his fake teeth, but he’s still $90,000 in debt.

How is he going to pay that much money back for his hospital bills?
He will never be able to pay it off; he has  to file for bankruptcy.

Do you ever skate contests?
I hate contests. There’s no point unless your sponsor wants you to. Anything else is pretty much just showing off.

Rocky Norton is still out there, bro. 50-50 to elevator drop. Sequence: Ray

What about the X-Games or Dew Tours? If you were invited, would you go?
I’d go if they paid me some money, but I definitely wouldn’t want to skate the contest.

Everyone on Creature has at least four tattoos. What’s the deal? Why don’t  you have any?
Because I’ll never be able to afford a tattoo.

I guess you don’t get as drunk as Gravette or Silent Mike and have late-night tattoo parties.
I get as drunk, I just don’t want to share tattoo needles. And if that’s what it takes to get a free tattoo, then fuck it. I’d rather not get one.

Who has more, Silent Mike or Heddings?
I’d have to say Silent Heddings.

Who’s your pick for SOTY this year?
Taylor Bingaman.

What about COTY, Creature of the Year?
Taylor, again.