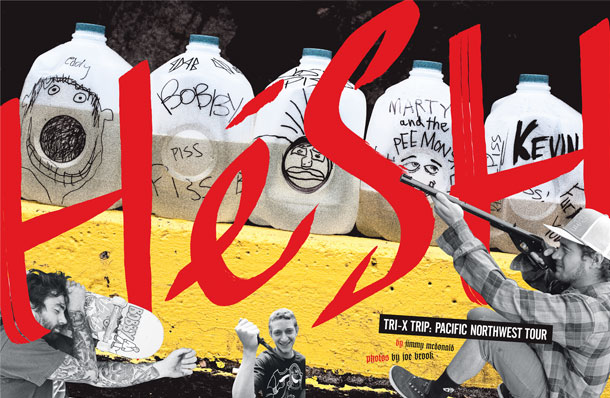 The term “Hesh” and the Pacific Northwest seem to go hand-in-hand. But what does hesh mean? It’s not easily defined, and there’s certainly lots of room for interpretation. Most would agree it’s derived from the word “Hessian,” which Webster’s defines as “A mercenary or venal person.” However, when browsing UrbanDictionary.com for the definition, some associated key words popped up: “Dirty, unkempt, fuck yeah, bandana, Suicidal Tendencies, biker chicks, back Smith.” An eclectic group of words; nonetheless, they all seem to apply. This summer, the éS team traveled extensively through the Pacific Northwest in search of the word’s meaning. 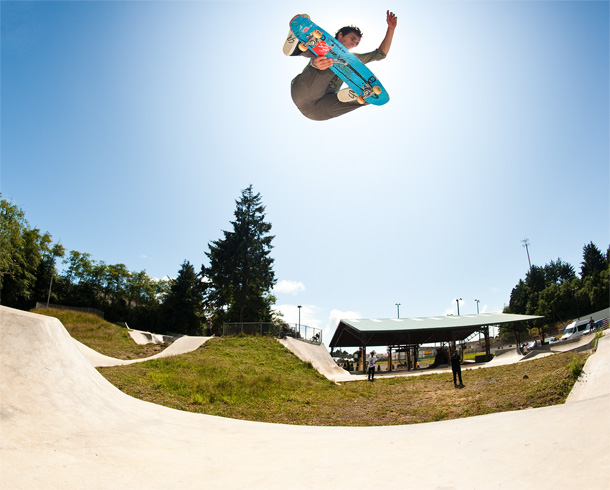 McCrank, solar-powered stalefish in Redneck country. If only he were fat!  Fat guy on a little board! Lincoln City, OR. Click image to enlarge.

The tale of three vans
We trekked the rugged coastline of the Pacific in a three-vehicle caravan: The éS van, led by Scuba Steve; Joe Brook’s van, Big Blue, led by the man himself; and the Ventura homie van, with Manderson’s bro Paul Williams-Ramirez at the helm. Each van was unique in its own way, with varying levels of comfort and space. The individual character of each, the lengthy journeys, the disposal of bodily fluids, and the places we encountered along the way all aided in our search for the meaning of hesh.

"In the living room, the entire world was a mystery"

Scuba Steve was the leader of the pack, driving the éS van in pole-position for the trip’s duration. This was by far the most luxurious vehicle of the three, with ample space and superior hygiene. It was also the only ride for the initial leg of the trip from LA to the Bay Area. Once Big Blue and the Ventura van came into the picture, there was a mass exodus from Scuba’s beast, the skaters looking to rough it out and get a little cozier in honor of what we were all searching for. 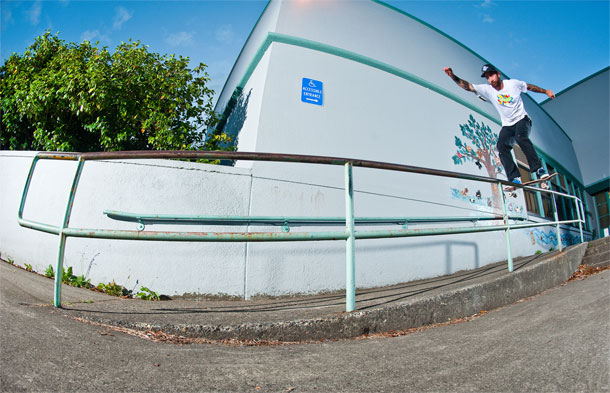 Bobby, taking it to the streets. Long boardslide, Portland. Click image to enlarge.

The éS van was given the nickname of “first-class” by the members of the other van’s crews, and by the end of the trip, much to Scuba’s dismay, the first class-cabin had lost almost all of its passengers. Kevin Romar, Kellan James, and Trent McClung held it down, however, sticking it out for the duration without giving in to the temptations of the other rides. 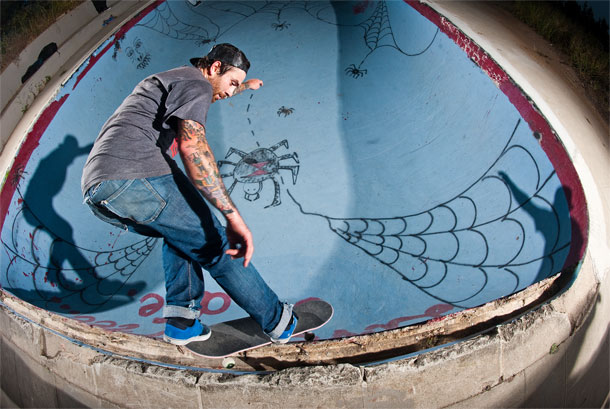 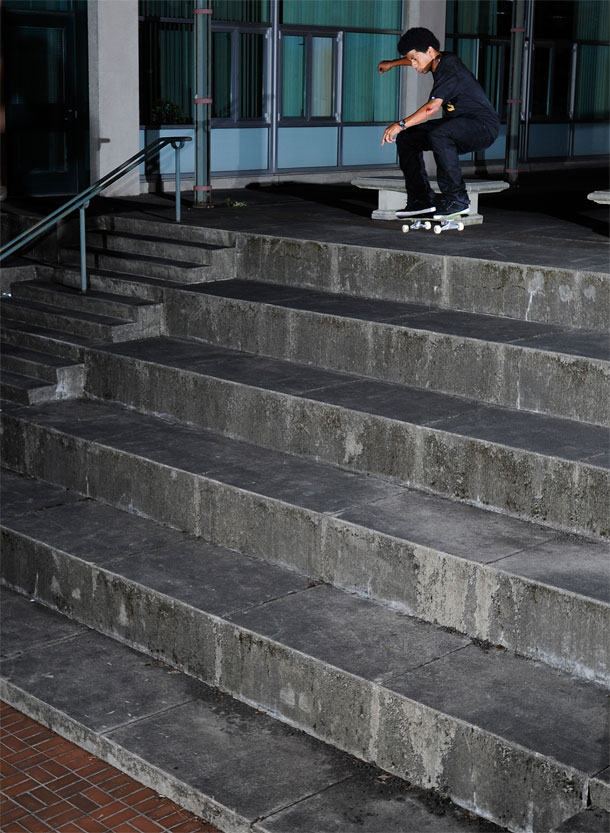 Then there was the Ventura van. Quite possibly the heshest of the three, this 15-passenger had no rear windows, one bench in the back, and a carpeted floor. It was deemed “The Living Room,” due to the rear cabin’s resemblance to your childhood best friend’s basement. The crew: Angel Saucedo, Paul Williams-Ramirez,  Rueben Alcantar, Mike Anderson,  Stevie Perez, and Josh Matthews.  The lack of windows and seats in the back made for an interesting dynamic. The world on the left side of Big Blue was a mystery due to the flag covering the windows, but in The Living Room, the entire world was a mystery to the rear passengers. It wasn’t uncommon to be completely disoriented at every stop. All the skaters saw were the beginning and end points of each journey—nothing in between. Angel stepped out of the van after a short drive to the gas station and said, “Damn Doggy, we’re not at the hotel no more?” This sort of reaction became perfectly normal as the trip progressed. 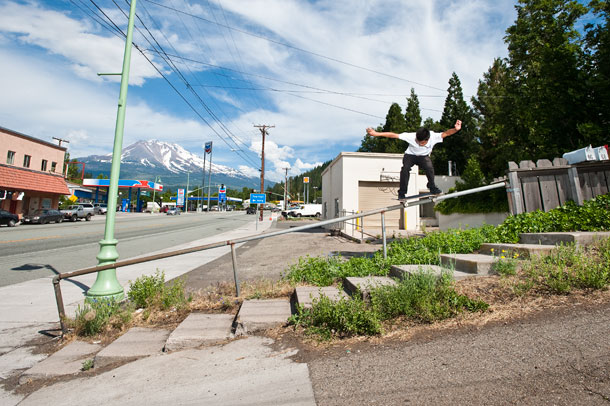 Stevie Perez makes a guest appearance in Weed, CA. One toke over the line backside 50-50 with a view. Click image to enlarge.

Piss the bottle
It’s no secret that time spent in the van brings about the most memorable moments of the journey, especially when traveling with such a charismatic group of gentlemen. One of these moments happens on long rides, when bodily fluids are disposed of into whatever containers are readily available. Known as “pissing in a bottle,” this activity reduces the amount of bathroom stops on the road. Most people can fill up gallons of empty water bottles through these stretches. Each member of the crew bought gallon jugs of water to fill up with their own brand before one particularly long drive from Northern California to Eugene, OR.

"All of the bottles were used for bb gun target practice"

In order to ensure that the bottles wouldn’t be confused with one another, everyone naturally wrote their names on them, eventually personalizing the vessels with artwork representative of their personalities. A big smiley face on Ben’s bottle represented his care-free, happy-go-lucky attitude. A lion with smoke all around it on Josh’s symbolized his 420 lifestyle. A bottle with a Coors Lite can covered in tattoos expressed all that is Bobby. When we finally arrived in Eugene, we lined up all the jugs in the hotel parking lot—it was as if we were looking at our urine alter-egos sitting there on the asphalt. Sadly, all the bottles were used for BB gun target practice the following morning. I think a little piece of everyone died inside as they watched their pee containers lit up by the smoking gun. 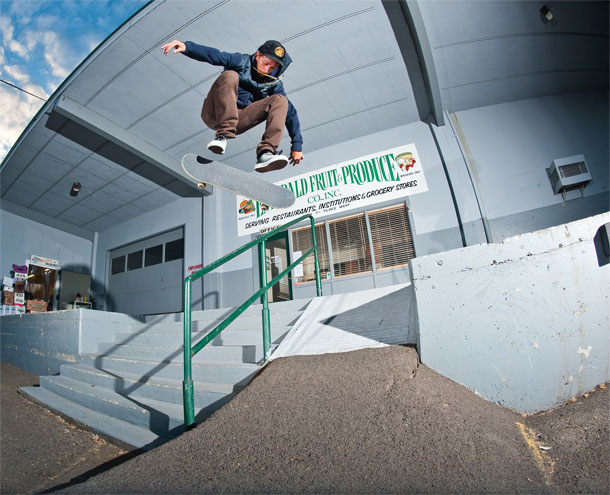 State Fair Letdown
Following Portland, we trekked it up to Olympia, WA—hometown of our resident cinematographer, Marty Reigel. We arrived in Olympia during their annual summer lake fair. Since it was raining for the duration of our time there we dove face-first into the Ferris Wheels, Carny games, and stuffed animal prizes. In hindsight, this may have been a huge diversion from our journey to find the meaning of hesh, but Manderson did seem to have a knack for those Carny games. He won every contest in sight, from shooting rifles at moving targets to a cardboard cut-out horse race. By the time he left he had prizes for everyone: Inflatable chairs, life-sized stuffed animals, gold chains…

"He won every contest in sight"


Bad Jimmy McDonald had his dick in a Gatorade bottle for over two minutes but still couldn’t piss. Ollie over the rail to tailslide on the ledges are no problem in Duffelland

Doin' Guys
Olympia turned out to be quite the town,  but it was time to head for our final destination of Seattle. It turned out to be a good ender to the trip.  We had some great days cruising around the city and taking in the sights. On our last night in town we drank beers outside the hotel and reminisced about our time together. Ben strolled into a nearby alley to take a piss, where he noticed the silhouettes of two people in the distance who seemed to be getting pretty hot and heavy. Eventually a haggard-looking bearded man and a seemingly-weathered woman of the night emerged. The man headed away from us, but the woman walked right up. As she approached, Ben politely—and innocently—inquired, “Excuse me miss, what were you doing back there?”
“Doin’ guys,” she replied, simply. Ben surely understood the rest. She offered her services to the crew, which we respectfully declined. It had been a long trip, but not that long.

"She offered her services to the crew" 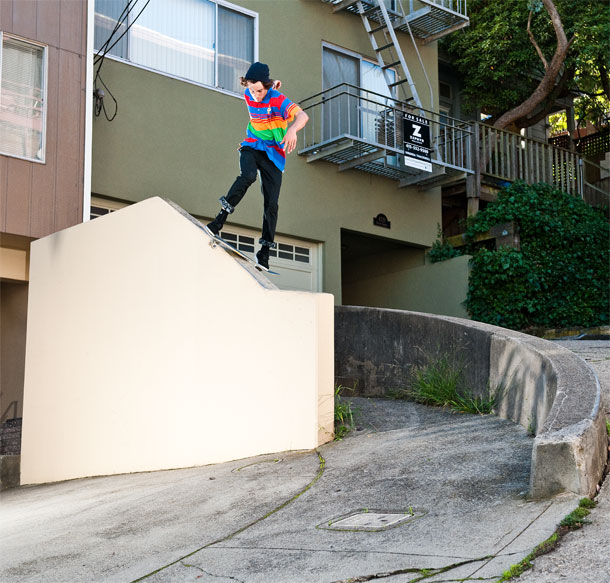 Ben Raemers had quite the problem in the bog at first. Lipslide through the kink, smooth as Ex-lax

All in all, the journey was a success. Did we discover the meaning of hesh? It’s hard to say.  Can it really be defined? Is it supposed to be defined? Who knows? We did get to travel around an amazing part of the country with an incredible crew, and had some unforgettable moments  in between. I’d do it all over again in a heartbeat.

When an amazing team and great filming collide, it's not going to be your average tour vid. Even the "street guys" attack some of the biggest terrain the US has to offer. McCrank, Rattray, Manderson, Raemers, and the rest had a good summer.