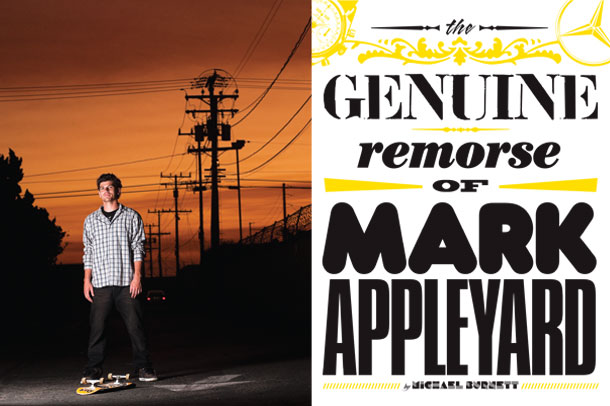 What’s been on your mind lately?
I’m always thinking of ways to live leisurely. Ways to, you know, get rich.

Yeah, ’cause lately every time we’re hanging out you’re always talking  about schemes so you’ll never have  to work again.
Exactly. I don’t ever want to have to work. After skateboarding I don’t think I could work.

Are you worried that you’re not cut out for the world of employment?
Yeah. I’m just scared that I’m going to have to work, and I don’t want to. And I like nice stuff—cars and houses. I like the leisurely lifestyle, so my mind’s brewing on a lot of ideas. Sometimes they work out.

What are some of your winning ideas?
I had some money in United States currency and I waited until the Canadian currency was worth the most. When it was $1.00 to $1.40 Canadian I traded a couple hundred grand and made about $70,000 in the exchange.

This is very different from the young man dreaming about crooked grinds from a few years ago.
Yeah, well, you know, as time goes by you realize that it would be nice to be rich.

In fact, the last time we did an interview you spoke specifically about how you had gotten rid of your luxury car. You said, at that time, that luxury cars were stupid. What made you change your mind? I know these days you have two luxury cars and have even purchased some men’s jewelry. What changed?
I think I just woke up to it. I was like, “Shit!  I like nice shit!” The luxury cars are way better than the other ones.

Is it true that you had the BMW X5, but that you bought an additional Mercedes because you thought the X5 was too big to go get coffee with?
That’s true. Too much gas. Too heavy.  I needed a little street cruiser. A little Benz. I keep it German with the automobiles. Germans make the best cars, man.

You realize how ridiculous this sounds?
Yeah.

What about this jewelry?  This is the weirdest part to me.
I bought two Rolexes. I spent $18,000  on two Rolexes.

Do they help you be on time better?
Nope.

Do you wear them skating?
Nope. I want to keep those forever.  I rewarded myself.

Not that you’re a slob, but I don’t think I’ve ever seen you dressed up super fancy. So do you just wear your usual skate gear and then your luxury men’s jewelry?
Pretty much. You know, I can put some nice pants on every once in a while.

Slacks?
Some high-end Volcom pants, yeah. I just rock my normal gear with the Rolex.

What’s the most expensive thing  you’ve lost?
Oh man, the Hasselblad X-Pan. That X-Pan was about $2,000. I lost that. Spaced it. Left it at a backyard bowl. Went back the next day, it was gone.

So you say you bought the fancy jewelry to reward yourself. What did you do to deserve a reward?
Just livin.’ Just ’cause I’m doin’ the thing.

I know that the rest of the Flip team is killing themselves to finish this video; however, I heard a rumor that you finished your part years ago.
Yes I did. The bulk of it I finished in 2004, right after the SOTY, when I was really on fire.

You’re like the kid that finishes his homework before class is even over.
Yeah, get ’er done. Finish it on up.

So this hasn’t been a big push for you these last few months.
Not really. I don’t really work well under pressure. I try, but as far as going out and kickflip boardsliding down El Toro, that’s not really my style. I don’t really want to risk anything or get hurt ’cause I like to skate a lot. I want to be able to skate on a daily basis and not do anything that’s too stressful.

So have you lost your killer instinct?
I don’t think I’ve lost it. It’s on a little hiatus. It’s chillin’ right now, but it comes out every once in a while.

Remember the Thrasher cover where  you did that Smith grind in Daly City? You took it to the nuts five times but  still made it.
Ah yeah.

So no more of that?
No, but it’s different when you’re new to the scene, comin’ up.

What was it like when you were 17 and everyone was coming at you? Did you feel like you needed to impress every time you went skating?
Yeah. And I was hungry. I was really hungry. I had all those dreams—making it out to California, being a pro and, shit, why not go for the SOTY, give it my best and shit? Then you get there. You’re stoked. But then you’ve got to enjoy it.

So what’s your approach now to getting  a wicked move on camera?
The ideal conditions are that I usually feel more comfortable if I drive. I’ve got all my stuff with me. I usually feel more comfortable if my bros are with me. But, if not, we can still make it happen. I mean, I’ve done a lot of tré flips down stuff. I’ve done a lot of the stuff I think I can do. Now I’ll wait until something sparks me and I get an idea rather than jump on every session. I’m more selective with my stunt work.

You sparked a revolution with this nollie bigspin bullshit.
Mmmm-hmm. That’s some bullshit.

How’d you come up with this nollie bigspin attack?
The first time I saw someone do it was at this park in Ontario, Canada. My friend was doing these big old nollie bigspins. I thought, “What?” That was the new shit. No one had ever really seen it before. And it was easy, super easy! Just hit the nose and that thing floats right around. Then from there, just throw it to tail or whatever. I did it all around the world. Then people just started to do ’em, I think.

Off bumps, down stairs.
It became a hot move, maybe. I definitely need to chill out on that. There are some new variations of it coming up in the Flip video. I’ve still got one variation I want to do before  I put it to rest. That nollie heel spinner 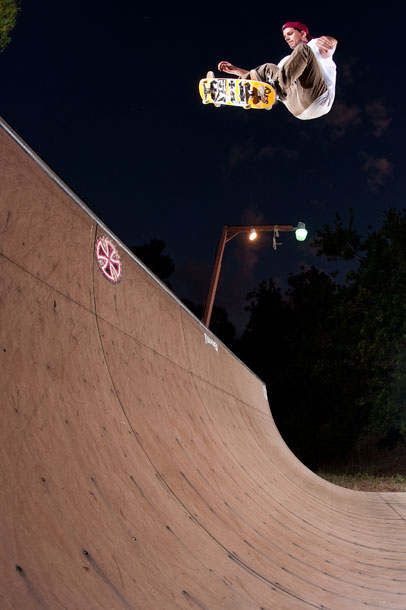 The nollie bigspin heelflip backside 360?
That’s the one.

We tried to get that for this little feature.
It was too hot! There was no shade over  that ramp.

So you really enjoy a good halfpipe session?
Yeah. It’s just so easy on the body and you can have so much fun with it. You can go fast. You’re grinding, you’re ollieing, you’re sliding out on soft flatbottom.

Do you think dudes that never skate that stuff are missing out?
They’re missing the boat. I don’t know what they’re doing. You’ve got to get on that ramp.

What’s the least fun thing to skate?
Handrails. They freak me out, man. They’re really scary, those handrails. And big gaps. I’m not really down for a giant gap.

Did you try to talk him out of it?
Kind of.

What did you say?
I was like, “Oh, man. You sure?” But he had made up his mind and I can’t get in the way of a friend. He was coming at me on a real level. He’s a friend, too, and a teammate at the same time. I gave him my opinion. I was like, “You’re the man over here. You’re kind of like the legend of the team, so why don’t you hang out?” but he was over it. He was over it.

I know you have a lot of exciting new riders on Flip.
Yeah. They’re all young.

Obviously you like them all, but who is your favorite?
Louie Lopez is probably my favorite of the new crew. He’s got that spirit of a good skater. Beyond amazing skateboard talent, he’s just a good dude, down to earth. He knows how to hang out and it’s nice to see people come up who are really cool and seem like they really deserve it.

Why are you still in Southern California if you dislike it so much?
Fifty percent of the time I could be somewhere else. But then when you’re away for a while you start to miss it ’cause that’s where all the action is. That’s the place where you can make it happen easier because you’re surrounded by skateboarding and skateboard photographers and filmers and the industry. It can make you sick sometimes, so you have to spend some time away from it.

Whose phone call are you most likely to dodge?
If I know it’s someone who wants me to do something that I’m not into. That’s a potential dodge.

Is it hard to please your sponsors?
Sometimes it is. Sometimes the pressure gets to you, but that’s what happens when you get to that point. I deal with it. Sometimes it’s hard to go out and get a picture under the gun, especially if they want it to be as good as the best thing you did in the past. That’s difficult, ’cause the level in skateboarding keeps going up.

Do you see yourself going in a Caballero trajectory? Will we be able to buy an Appleyard item of product in 15 years?
I sure hope so. Appleyard the jean. Appleyard the Volcom pant.  You know, just keep the name on the product and keep it out there for purchase.

Is the Internet ruining everything?
It seems like people just want to see you on The Berrics rather than watch your next part in a video. You don’t have to worry about that stuff too much, though; it’s just overload. I can’t say anything bad about it, that’s just the way things are going. The Internet’s like the new TV. If you can advertise and market on it, go for it.

What’s some weird shit you got yourself into in the early days before you knew what the heck was going on?
I’d been on some weird freakin’ tours when I was just too green and too naive to know what was happening. I did a tour with Birdhouse probably in ’99; we drove across the States with Heath, Reynolds,  J Strickland, and Lenoce. I think we did the whole thing in a Lincoln Towncar. I can barely even remember it. The End had just come out, so Heath was driving the car into trees and over trees. It was when driving into everything was popular. I’ve been to some weird Zumiez parties in Colorado where some wild and weird stuff went on. I went to Vegas with Muska, and Danny Minnick and Sean Sheffey were there. We took the Chadillac Muskalade out there. This was when I was hanging out with the Muska. We were skating a little bit, but not much. It was more so they could party in Vegas. I was asking Minnick—I guess I was asking him too many questions ’cause he just snapped on me. I guess he’d lost a lot of money and didn’t want to talk about it. I was 17 and new to everything. I was all, “How much did you lose? How much did you bet?” He snapped on me. “I lost my ass in there! I don’t want to talk to you about it!” I don’t know how  I got involved in that trip. I was just along for the ride.

What trick are you most pleased with in the video?
Maybe the tré flip noseslide I did down Wilshire—five years ago.