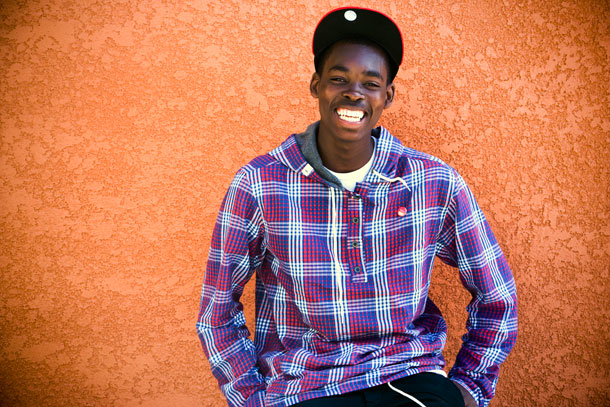 Does getting your photo taken make you mad?
No, I just like it. Once it comes out you get, what’s that called?  Oh yeah, more exposure. That’s a good thing.

Not the skate photos, the face photos. How come you don’t ever smile when someone takes a portrait of you? You smile  all the time, but when the camera comes out it goes away.  So do cameras make you mad?
Oh no, I’m not mad, Broach; I’m just hot or something. It’s not  like I’m mad or anything, most of the time it’s hot and the sun’s  in my face. My eyes are burning most of the time when it’s hot.  I need Clear Eyes.

How many times do you tie your shoes in one skate session?
Oh man, it’s not—what you call it? It’s not OCD or nothing, I just don’t think I know how to tie my shoe right. I tie them at least a hundred times a day. Just when I skate, not when I’m walking around or anything. Every time I go to do a trick I look down and know that it’s not going to work the way they’re tied, so I got to fix it real quick before I can go. 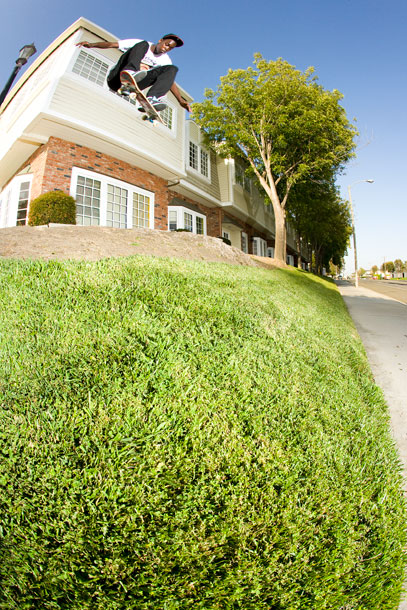 How many times do you change your shirts and shoes before you leave the house?
It depends on whatever I got.  I hardly change. One time I took  an extra shirt with me, but usually  I just take what I have on to go skate with.

Your friend Lewis said you had madness with it, that you have to change your shirts and  shoes a bunch before you leave your house.
That was a long time ago. I got to have a good shaped board and some shoes that I know I can skate in before I leave the house. Not really the shoes and shirts anymore, it’s wheels now. I’ve definitely got to be riding some new wheels. I have to ride crispy. Yup, got to ride crispy.

You’re doing home schooling right now and you’re almost done. Which did you prefer, home school or high school?
I started home school in the 10th grade and took home school for the rest of the two years.

Was that just so you could skate more?
Yeah, that’s what it was for, and so I could go traveling. It started with that first Altamont trip to Paris. I kept asking my sister for, like, six months straight if I could get it, and then finally she got tired of me asking and said yes.

Do you practice in the mirror?
I practice in the front of the TV. I watch the video by myself and try to get it down. I do it for like 20 minutes, take a break, and then get back to it. I haven’t shown anyone that knows how yet. 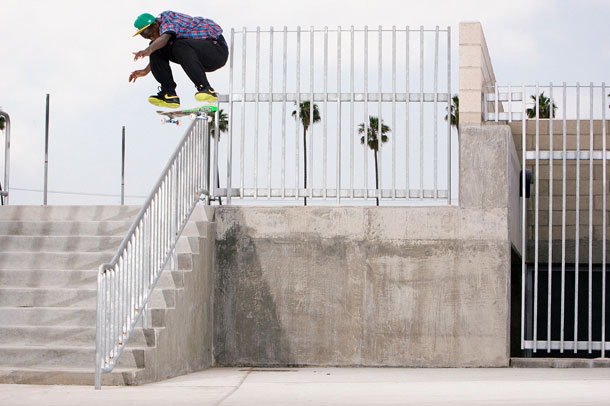 Let’s get into some stories about Theotis. I went to pick you up one time and you told me gunshots had just been fired about a block away from your house. Let’s hear that story again.
Lewis and me were outside my house skating one day and I thought it was fireworks. Even though Fourth of July wasn’t here yet, I still thought it was fireworks or a cherry bomb or something. I thought it was a pack of them going off all at once, like real quick. Then Lewis was like, “No, it’s gunshots,” so we ran into the house. It’s crazy around here, they shooting like everyday. Where  I live, Altamont can send me only neutral color shirts—black, grey, or whatever, other colors like green.  I can’t be wearing any other colors, just neutral ones.

Anyone who’s ever met you knows how nice a guy you are. How did you turn out so good growing up around all that stuff? Most kids could have gone in a different direction.
I think I turned out good. My mom, she raised me good. I remember I called her and said thank you for that not long ago. She just made me act like myself, not try to act cool or anything.

How many people live with you then?
One…two…three…four…five…six—six, including me.

Where’s your mom at right now then? Did she send you to  live with your sister for a while?
She stays out in Alabama. She had just bought a house out there.  I hadn’t seen her for a while but she showed up in Atlanta because  it’s not that far from Alabama where she lives. She showed up  for the Nike video. It was really cool. We even had a special  premiere at the hotel for her. I haven’t lived with my mom  for a while.

I’m sure she sent you with your sister for a good reason.
She was going to take me back to Alabama but I didn’t want to go. I would have been too country when I got back out here. People would have been like, “Man, where have you been for so long?” I stayed out here because Drew had started flowing me boards for Baker. If I had gone, I don’t think I would have had the same opportunities there as I would have out here. I wouldn’t be on the companies I’m on now. I’m thankful for that.

What would you do if you didn’t skate?
Play basketball or something like that. Playing basketball, for the Inglewood Jets maybe. Or football. Or maybe some other sport; I don’t know.

I remember you would go over to the old Baker house on Hollywood Boulevard for weeks on end. Did your sister send you over, or did you just want to go?
I would just go to skate. Also to make it easier on Beagle, so he wouldn’t have to come pick me up all the time. I would stay all week, then on Sunday or Sunday night he would give me a ride home.

You don’t do drugs or drink or smoke or anything, so was it hard to hang out at the Baker house sometimes?
It never bothered me. I just always kept my head positive. Never wanted to try anything, just never wanted to do it. All the homies want the best for me, so there was never any peer pressure. They all want to see me do good. To be a part of one of the best companies is just such a good thing.

Didn’t Beagle make a rule that you couldn’t watch the same video over  and over?
No, it was Flip. He said after 9 pm I couldn’t be watching skate videos. I remember I tried to watch the Black Label video after 9 pm and he took it out and threw it over the balcony onto the street! I went out there to look for it and it was gone. I was bummed, ’cause I was trying to collect all these videos and it was never to be seen again. That Black Label video was good.

Now that you’re 18, do you see any face tats in your future?
Oh no…face tats. I would never think about any face tattoos, but probably a normal tattoo. Something that I thought about for a while maybe. But no face tattoos at all!

Do you think you’ll move out of your house someday and move to Hollywood like the rest of the guys?
I hope so! Because that’s where I always wanted to live. It’s got the stars, it’s all lit up at night, and you and your homies can walk wherever you want. I want to move closer to some of the homies. It would be really good.  I could go out skating and filming everyday.

You going to be with Braydon up in the clubs? Hanging out with the Muska and Paris Hilton?
For sure. With Muska and the Hiltons drinking Coca-Cola. I went to the bar once, but I was like 17 at the time. I don’t know why they let me in. I don’t look 21. But Reno just bought me bottles of Coca-Cola all night.  It was fun.
© 1981–2020 High Speed Productions, Inc.