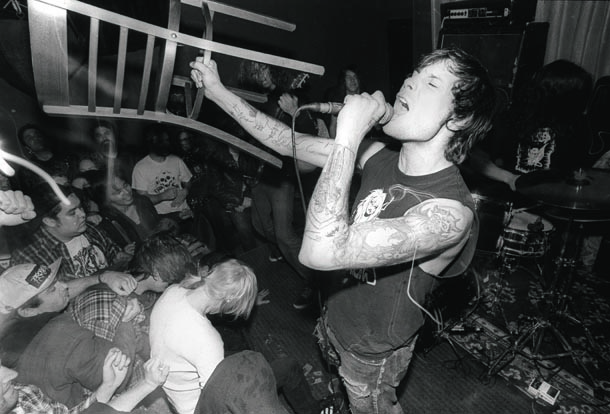 — there couldn’t be a more apt name. Five guys in a band or your own personal tidal wave of rock and roll destruction? Over the course of attempting this interview, I would learn to opt for the latter. They insisted that the interview occur within their personally crafted party vortex—a vortex where coherent thought is overridden by the  good times that leave you waking up in strange places to strange faces.  As the memories piled up, so did the failed interview attempts. More  funny than frustrating, they didn’t give a shit. Their priorities were set on 12 packs and party status over spitting bullshit into a tape recorder. Months later, after a broken hand, cancelled European tours, and new members, Annihilation Time’s pedal is again scraping the metal. By the time you read this, they’ll have completed another US tour with plans to record their third full length as soon as their heels cool.

Start off with some background about the band.
Graham: We wanted to start a band that sounded like Bl’ast!. That was five years ago.

Was that here?
Graham: It was down south; we started jamming in Santa Barbara. Then we moved to Ojai. Jimmy: Yeah, but I remember you teaching me some riffs at a gas station somewhere  in Texas.

Obviously you’ve been through a couple of lineups.
Chris: We’re on our second singer and  third drummer.

You guys were on mushrooms when you were at KCSB?
Graham: Yeah, we were doing a radio show.
Jimmy: We got so fucked up and the anxiety took over and we had to stop.

Since the lineup’s changed a couple of times, how does that affect the way you interact with each other?
Chris: It’s cool. There’s a hierarchy already between Graham and me.
Graham: We’re all really good bros so it’s almost the same. We’ve all hung out for the past six or seven years.

It’s never starting from square one  with someone?
Graham: No, we never get a random dude. It’s always a bro.
Chris: Never a non-bro.

When did you guys decide to move this thing to Oakland?
Graham: Just recently, like one year ago.
Jimmy: But when I lived here you guys would come up all the time and stay at  my house. Graham: We all moved up here a year ago, except for Jimmy.
Jimmy: Yeah, I’m always like a city away the whole time.
Graham: Ventura sucked, there was nothing going on, it was hard to get a house, it was much easier here—so we decided to move and get a pad where we could all live together and jam. Jimmy: But we also built that house on the beach down in Ventura so we could have a place to hang out. We all built it together. It was like we lived there.

Was it a house or some beach bungalow?
Graham: It was thatched out of bamboo.
Jimmy: The river burst its banks and it was swept away to this island, then it was swept back, and its been on the beach ever since.
Noel: We had a door and we built it out of two-by-fours and old telephone poles.
Graham: It was built from the debris from a landslide. That’s where it was all from.
Chris: And stuff from the river bottom.
Jimmy: And stuff we would find in the  hobo jungle.

How’s your hand doing?
Graham: It’s way better. It’s a little janked; it’s fucked up. I have half my normal movement in one finger and one of my knuckles is frozen. Like forever, I guess, but I’m pretty much 80-percent.

How did it happen?
Grahm: We were partying at the house the night before; somebody smashed our table and I was trying to fix it. I wasn’t paying attention and the wrought iron under the base of the table fell and sandwiched my hand. It shattered my first three fingers on my fretting hand. I fucked it up pretty good.
Chris: The middle one was almost severed, wasn’t it?
Graham: Not quite, it was just really  fucked up.

When you’re on the road, how do you afford to pay for your gas and your drug habits at the same time?
Jimmy: Our bro used to get money from his dad and he’d buy sacks of weed. He loved smoking weed. We don’t really do drugs, but  if people give us drugs…
Chris: We take them.
Jimmy: Sometimes we say, “Nah, we don’t feel like it.”
Graham: Band fund beer, that’s pretty cool.
Jimmy: Only sometimes.
Graham: But a lot of times lately.
Jimmy: We’re better now, but when we  first started…
Graham: Sometimes we make a sign at the merch booth. You know, “We need weed,” or “Will trade merch for weed.”

What’s up with the party scene at your house? Does your landlord just hate you?
Graham: Luckily for us she never comes  into the house, so she never actually sees  how fucked up it is. I don’t think she cares  that much.
Chris: Actually, she wants to get our neighbors out and more of our friends in. Punk rockers instead of Section 8 people.
Noel: We pay rent and give her cans to recycle so it’s cool. The bottle recycling alone must get her a pretty penny.

Are you working on anything new, or  are you going to burn away the rest of the talent?
Graham: You mean new songs? I think we have enough for a whole new record. We wrote a bunch of new songs in the last few months.
Chris: We’re definitely going to record when we get back. Well, either put it out or demo it.

Where are the better crowds for Annihilation Time? In the Bay Area, Cleveland, or Ventura? Jimmy: All three of those places are all awesome. Maybe the Bay Area—there’s always a big party and a big mosh pit here. There’s not a place to party down in Ventura; everyone’s living with their folks waiting until they inherit the house.
Graham: The shows are also cool (in Ventura) because we never play, so people aren’t super sick of seeing us. We only play there a couple times a year.
Jimmy: But the promoters rip us off every goddamn time. You just have to know and expect it to happen. Remember what happened with that Brian dude? It’s like we know we’re going to get ripped off, but let’s play so we can play.

Does it fuck with the  band with you living  in Cleveland?
Jimmy: Yeah, probably.

Why do you live there?
Jimmy: I live there because my girlfriend lives there, it’s cool to skate; I’m kind of burnt out on California. I can visit but I don’t think I can live in Oakland again. I love it here, but it can be too chaotic for me. I’ve found out that this place is totally Babylon…Sodom and Gommorah? Isn’t Babylon more like Utopia? When I’m here I get totally fucking wretched.

What’s up with the Rock and Roll Hall of Fame out there? How come there’s not a Black Sabbath exhibit?
Jimmy: Because the Rock and Roll Hall  of Fame is total bullshit.
Graham: No way, man, they have  Jimi Hendrix’s pants.
Jimmy: They only know about what’s been written about in major magazines. It’s like anything else, there’s always the underground.

It seems totally industry-based.
Jimmy: Yeah, but in the back everybody gets to write on the wall.
Graham: Is Foreigner in the Rock and Roll Hall of Fame?
Jimmy: Probably. Maybe as an  inductee because I don’t think they’re up  to date enough.

Do you think hardcore and punk can survive another 10 years?
Jimmy: Fuck yeah. People still make chamber music and shit like that.
Chris: And that shit is lame.
Jimmy: People still play Bach on a harpsichord and rich people pay for it.

Then why do people always say punk’s already dead or it’s been dead?
Jimmy: Because they’re not active.
Chris: ’Cause they’re washed up. They’re the one’s who are dead.
Jimmy: Or maybe they’re too closed minded to move on to what the new sound is.
Noel: Or make their own new sound.
Graham: The only thing that bums me out about punk is that it doesn’t seem like it has progressed that much. Maybe there needs to be something new.

Is it hard to innovate in a genre of music that can be kind of limiting?
Jimmy: It’s not hard to innovate if you’re hanging out and you’re real people, playing real music. That’s punk. And sometimes you can’t put your finger on where the influences comes from but it’s real.

Do you think the phrase “Skate and Destroy” is still relevant or has that era already passed? Jimmy: No way, man, there will always be punk rock skaters. People will still throw some wood against a wall and skate it ’til it’s smashed. Skate over a can of pop ’til it’s flat. Skate and destroy, that’s the only way.

What’s the future hold for  Annihilation Time?
Noel: We want to build our own compound, you know, guns and dogs.
Jimmy: A helicopter maybe.

Check out Annihilation Time's upcoming shows on their myspace, or download tracks and full albums from the itunes store.
© 1981–2020 High Speed Productions, Inc.