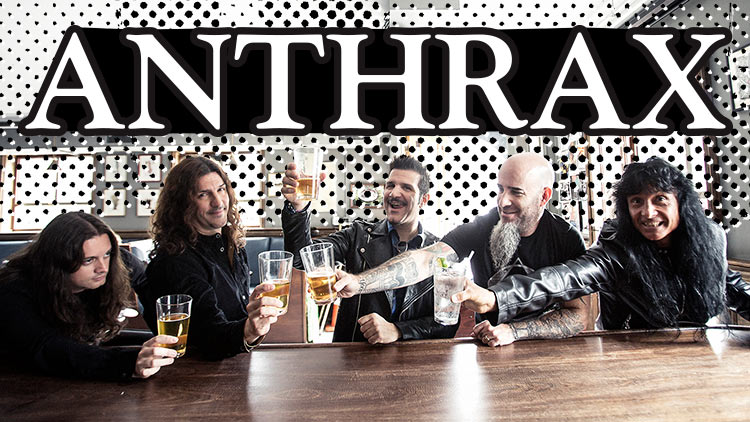 It’s hard to believe that Anthrax has been around for 35 years. The world is a better place ‘cause of them. Well, at least a louder, more obnoxious place—and I mean that as a whole-hearted compliment. It seems Anthrax has been through two waves of breaking through to the mainstream: once during the late ‘80s when MTV was drunk on glam and grasping at thrash metal during the last breath of that era. And now as the masses wade through the ashes of the big four shows (Anthrax, Megadeth, Metallica and Slayer) that has penetrated your TV and into your living room for grandma and you to rock out to. They have been all over the board, from bullet belts to Bermuda shorts, but have always been disciples of thrash and heavy advocates of another beloved outlet which is also loud and obnoxious: the skateboard. Five years since their last album, Anthrax emerges with another piece designed to feed the newest populace of metal heads on a global scale. Far from the early days of Spreading the Disease (yet still reminiscent), For All Kings is a matured piece of chunky metal moving at a nice pace, spewing flawless solos and classic vocals. I was able to talk with Scott Ian about the new album, Lemmy, Meat Loaf, and rap music. —Sam Hitz

So, let’s start this off—Lemmy! Did he have a chance to hear Anthrax’s new album?
No, not that I know of.

Had to ask, I gathered you guys were close.
I knew him for 30 years but it’s not like we were hanging out on a regular basis. But I got to spend a lot of cool time on tours around the world with him. Motörhead was cool enough to take Anthrax out on tour so many times, so I did get to spend a lot of really cool times with the dude.

It’s the end of a page in Rock ‘n’ Roll.
By far, Lemmy and Ozzy are the most iconic hard rock heavy metal guys of all time, so losing Lemmy is a giant void and it will never be filled. It’s really a strange thing—a world without Lemmy. Obviously, we got the catalog of music and the legacy. It’s just weird to think that Motörhead won’t be playing shows anymore. It’s been a constant in my life for 35 years.

You wrote 20 songs for this new album. What happen to the other eight?
We never had 20 songs. I had 16 ideas and recorded 14. I didn’t finish the lyrics to two of them. They’ll get done somewhere down the road, and the 12th song is a bonus track on the Japanese version called Vice of the People.

So, for a youngster skate rat that doesn’t know Anthrax and you want to introduce them with a starter kit, would you start ‘em off with this new album, For All Kings? Or maybe Spreading the Disease or Fistful of Metal?
I would start ‘em off with the new one and then go backwards. Since I was a kid growing up, that’s how most of the stuff I’ve ever gotten into—something like Motörhead, my first record of theirs was Ace of Spades. I fell in love with them and went back and got all the previous albums. I think that’s a cool way to do it: get the most current and then go back and learn the history.

Does collaborating with any rap artists cross your mind nowadays?
No.

Do you listen to any rap?
Nope. Unless you count rap made before 1994.

See, I wonder because the beat arrangements in rap music right now are way different from, say, “Bring the Noise.”
Yeah, I wouldn’t know. I stopped listening to rap music in the early ‘90s.

That’s a shame, dude. You should check out Kool Keith or 2 Chainz.
Ha, not a shame for me. I stopped because it didn’t move me anymore. It changed and I didn’t change with it. I would rather listen to all the shit I grew up with. I’m perfectly fine with that. It’s not like I have a plethora of time in my day to check out new music. Odds are I’m just gonna be listening to the Allman Brothers.

Are you touring with Lamb of God now?
That starts in a week or so.

Randy Blythe skates. When was the last time you had a board on the tour bus?
Ah, it’s been a long time. I skate at home, though. I have a four-and-a-half-year-old son and he’s just starting to skateboard.

Okay, so if you father-in-law Meat Loaf had to sing an Anthrax song, what would you hit him with?
Ha! That’s a good question. Off the top of my head I’ll say “I am the Law” because it would be really fun for me to hear him yelling that chorus because he’s got a really big voice.

Yeah, possibly adorn a scarf and get at it?
Yeah, exactly.

Now if Anthrax had to cover a Meat Loaf song, what would you pick?
“Bat out of Hell” would be the obvious one. I’m sure Joey would sing the shit out of it.

Man..I’m running out of stuff to ask here. How should we end this?
I think you just did.