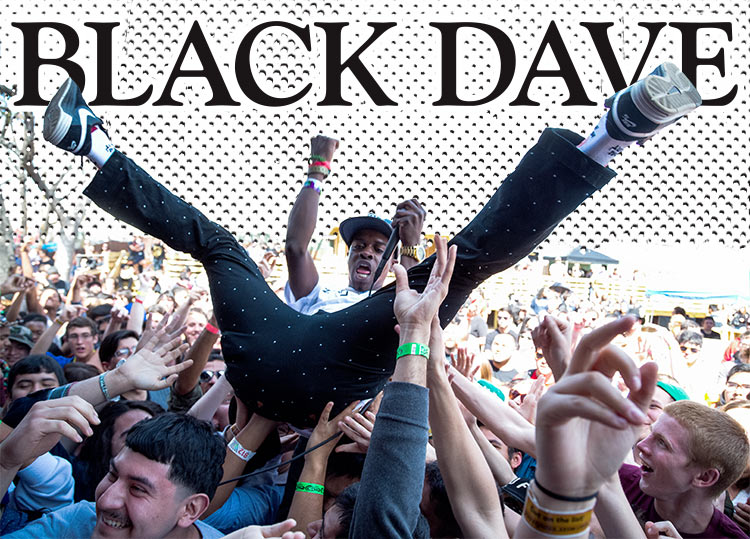 Originally printed in the June 2014 issue.

You may know Dave Willis, aka Black Dave, as one the Zoo York rippers.  This was his second year performing at the Death Match, and he shows no signs of slowing down with his skating or his rapping. After talking to him it is very clear that he’s extremely dedicated, so look out for more video parts and  mixtapes dropping soon. Interview & photo: Jordan Joseffer

Since the event was called Death Match,  if you could put two characters together in a fight to death, who would they be?
I’m gonna have to say Barack Obama and Gerald from Hey Arnold!—the black nigga with the afro.

Who would win?
Gerald from Hey Arnold!. I don’t fuck with Obama. I don’t know if y’all can print that.  I might have to switch that. Nah, keep it. Fuck it.

One thing rad about you is that you actually skate. Do you think there are a lot of rappers trying to associate with the image  even though they’ve never even slammed?

Yeah, I definitely know for a fact that people jump to skating as some stuff they think is cool and trendy. But you know, I grew up in New York City and growing up skating, a lot of people would tell me, “You ain’t gonna be shit doing that skating.” There’s a certain group of people that are not for you, but I stuck with it. Now to see how skating has elevated and people rocking with it—kind of more mainstream people supporting it—I’m not mad at it. I’ve been reading Thrasher since day one. Now you see a lot of rappers rocking Thrasher hoodies, and I think it’s cool. That’s dope. But the real skaters know what it is, and I’m definitely doing this for them.

You’ve got Thrasher-inspired art on your Stay Black mixtape. What does Thrasher mean to you?
Pretty much the feeling behind Stay Black was not about skin color. It was more like, stay true to who you are—what you represent—no matter if you’re just coming up, you don’t have a lot of people supporting you or you don’t have major funding behind you. That’s what it was. I felt like from the jump I wanted to be straight forward and stay raw. And what’s more raw than that graphic cover in your face? So I wanted it to have the same layout as my favorite skate magazine. Tryin’ to pay homage to that.

Who’s your biggest rap influence and who’s your biggest skating influence?
I couldn’t say I have one biggest rap influence, but I would definitely say people that stay true to who they really are and definitely my peers, too. I’m hugely influenced by my peers. People representing the same things as me. People like Lil B and Tyler, the Creator. People who kind of start their own movement. Plus my homies doing it; watching them get better and better. For skating, most definitely Harold Hunter is one of my biggest influences because of his personality. Everyone that’s spoken to him has a great story about him. There’s no one like him. Through his skating, you know his personality. Kids is one of my favorite movies, so he kind of represents what I’m trying to represent—just showcasing our scene in a positive way, and he made it funny.

Anything else you’d like to say?
Definitely shouts out to Thrasher, shouts out to Zoo York, shout out to Hundreds, Big Trill and Stone Rollers, which is like my crew of skaters that make music. And just be on the lookout for that new music, new skating and just keepin’ it going, man.