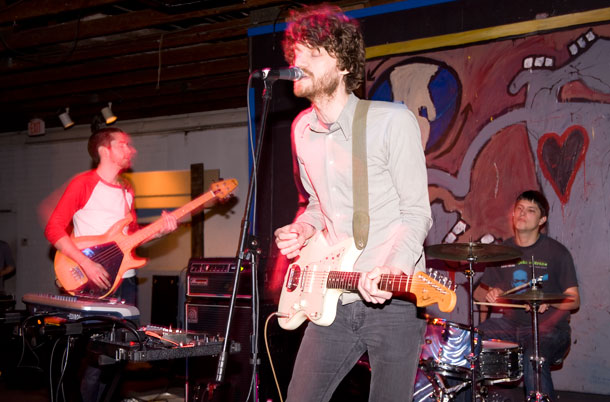 The April mag with The Faint interview is almost here—but due to the time it takes to publish a magazine, that interview was done over a month ago while they were on tour. Since then the tour’s ended, but Joel Peterson, their bass player, is back on the road with his side project Broken Spindles, in support of his new album Kiss Kick. The tour just started, so catch them if they’re passing through your town.

What made you start Broken Spindles?
It all started because my friend Matt Cole was working on a skate video and wanted some original instrumental music that moved and had a certain rhythm. He only wanted one song, but I ended up writing three tracks because it felt free and fun. Not having other people to slow the process down, it all just started coming out. It felt really fun, and after the end of those three, I felt like I had more ideas and kept going with it. By the end of it I had an album’s worth, so I put out an album.

Do you know the name of the video he was working on?
It never saw the light of day.

How many songs had you put together before deciding to tour as Broken Spindles?
Right when I finished that album. In my world, that’s kinda just what you do. You put out an album then you go on tour. Right off the bat I was like, “I have an album, better tour.” Well how am I going to do that? That album was all computer-based, and I’ve never really been a fan of watching someone check email on stage.

Did you bring musicians on that tour, or was it mostly on a loop?
I would play stuff, and my girlfriend at the time would play stuff. So on stage there were two people playing, and a video and some audio backing it. 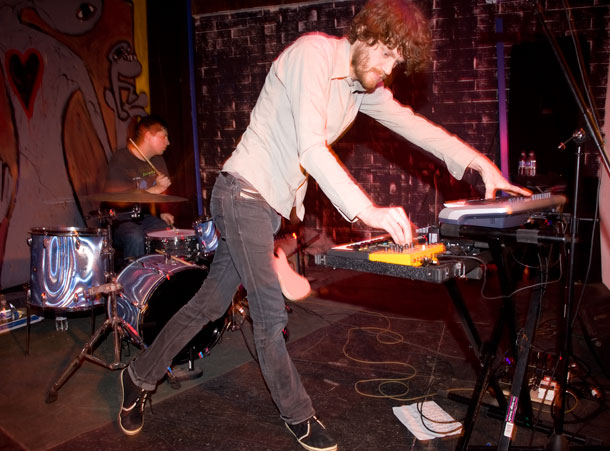 When you write a Broken Spindles song, do you think about how you’ll eventually play it live?
I try to keep both worlds separate. I don’t think the live experience and the recording experience have much to do with each other. For the recording thing, you are ultimately trying to make something a permanent record of your idea or whatever. Live, I see it as the minutes go by and you’re done. The methods of creating a song in those environments aren’t the same.

So is it safe to say the live show is an interpretation of the album?
Tonight is a little different, because this is sort of a rock band with acoustic drums and a bass player who also plays synth. I play guitar, so coming from a lot of music that’s computer-based or manipulated on a computer, this show is pretty straight-forward. It’s all about the songs and how we can mess it up.

These guys on tour with you now—how did you pick them?
Javeed, the drummer, I’ve know for a while. We’ve toured before, and on Kiss Kick he played drums. I wanted to get out of computer land on that album, so I used acoustic drums and I liked his style. Kyle’s the guy playing bass and some synth stuff. He works at a recording studio in town, and I was trying to steal him from that studio to work in my studio. We were hanging out one day and he picked up a guitar and I could tell right away that he’s really good. It’s like skateboarding—you can watch how a guy pushes and know that they’re really good. So I filed him in the back of my head and asked him to do this tour.

How does a Broken Spindles tour compare to a Faint tour?
I prefer to set up my own stuff on both. Some of the guys in the Faint let the hired help do it. With the Faint, we’re only responsible for the hour-and-a-half we’re on stage.

Which do you enjoy more?
They’re really different. In many ways I prefer to drive the mini-van. There’s a sense of camaraderie with the other band members who are all within four-feet of each other. Sometimes on the Faint tour bus, we won’t see other band members except on stage. They could be hanging out with other friends in different parts of the bus. I like the smaller shows, too. I like the more personal aspect of it. 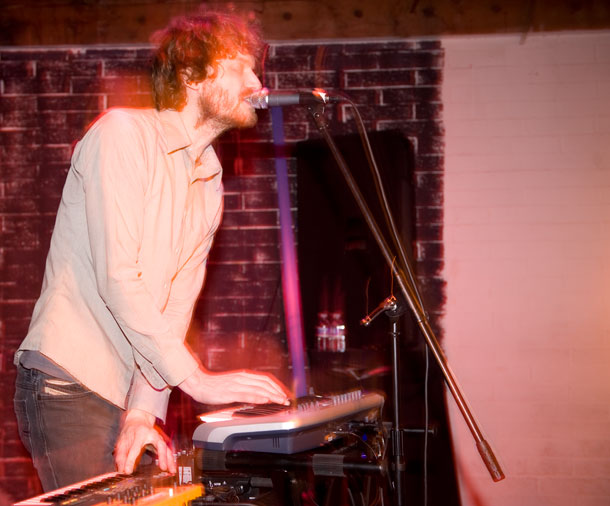 What’s your history with Steve Berra?
I’ve known Steve since we were teenagers, skateboarding in Omaha at the old Eat Concrete Skatepark. We would go there everyday with our friend Mike Brockman. Right around the time the skatepark closed Steve moved to California, and I stuck around Omaha and decided that music was going to fill my time. We’ve remained friends throughout the years and encourage each other—him with skateboarding and now the Berrics, and me with music and everything. There came a point when I released the second album Fulfilled Complete that I knew I wanted to do a video thing again. Berra had been involved with certain aspects of the movie industry, and I thought I wanted more of a cinematic approach. My previous approaches were narrative and conceptual but based on editing techniques and tricks. I just wanted something more cinematic and beautifully shot. He came up with the storyline and how it was going to fit the flow of the songs that I wanted to do live. He worked on stuff in LA and I worked on stuff in Omaha and we would send it back and forth, tweaking things here and there. I ultimately put it all together. It kinda flowed; I thought it worked out pretty well.

Have you skated at The Berrics?
I’ve rolled around. I skated before it was redone a little more seriously. It’s big! Everything there is kinda too big.

Yeah, it wasn’t that much fun for me now. I’m not jumping down these steps. We are playing in LA in a couple days, so I’ll go roll around The Berrics before the show.