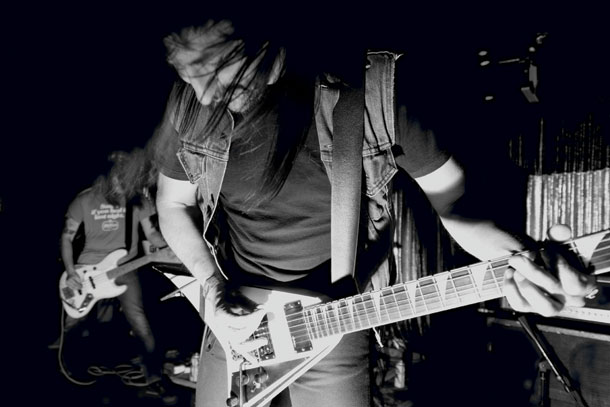 Much has been made in the underground music press lately about Christian Mistress’ New Wave Of British Heavy Metal influences and killer female singer, Christine Davis. But what often gets lost in all the noise is that they’re one of the best straight-up metal bands to come out of the US in the last decade. The band’s debut full-length, Agony and Opium (20 Buck Spin),  is nothing short of a revelation: One minute, guitarists Ryan McClain and Oscar Sparbel are shooting white-hot Thin Lizzy guitar harmonies out of their eyeballs. The next, they’re joined by bassist Johnny Wulf in a barrage of old-school Metallica chug. Combined with infectious songs, a monster drummer in Reuben Storey, and the unforgettable voice of Ms Davis, it all points to one of the most satisfying and rewarding listens of the year—in  any genre. Thrasher caught up with Storey while the Mistress was on tour with Thrones in Minneapolis.

You don’t have much of an online presence, which is obviously unusual in this day and age. Why do you avoid the Internet for the most part?
I very reluctantly put up the website that’s out there now. I understand how people listen to music nowadays, and I can be guilty of it sometimes, too. You hear about a band, and you type their name into the computer to check ’em out. It’s so easy. I’ve done it before to find out about bands we’re playing with. But it’s so hard to listen to music on a computer, even if you plug it into your stereo. You can’t hold anything, you can’t read lyrics, you sometimes can’t see the images that the band wants to associate itself with. You need all of those things to get a feel for a band.

People throw around lots of New Wave Of British Heavy Metal references when they’re talking about you guys. It seems you don’t like that comparison very much, though.
Certainly that wave has had a huge impact on us, but it had a huge impact on Metallica, too—but people don’t go around calling Metallica a New Wave Of British Heavy Metal band, know what I mean? We’ll show up at a club sometimes and it’ll say right on the  flyer: “Christian Mistress: NWOBHM.” Or “’80s metal.” But this isn’t the 1980s. We’re  a modern band playing new songs. And we’re from Olympia, Washington.  We’re American, not British.

How did Christian Mistress get started?
Ryan and Oscar had been writing songs for like three years, but they never had a name. They went through a couple of drummers and had asked me to play drums for them, but I couldn’t at the time because I was in two pretty active bands. Then one of the dudes got me drunk and was like, “Let’s just play tomorrow.” And of course I was like, “OK. That sounds awesome.” When I went down there, I could tell right off the bat that they had well-crafted songs. Plus, we partied well together. We played music for four hours, and spent the next six hours getting wasted. Me, Christine, and Johnny were all working at the same pizza place, so everything just kinda fell together as far as her singing. Eventually, we got Ryan and Oscar jobs there too, so at one point all five of us were working there. It’s called Old School Pizzeria, and it’s dope. I’m a little biased ’cause I work there, but I think it’s the best pizza in Olympia.

Did you know early on that you wanted  a female vocalist, or did it just work out that way?
Oh, it was totally unintentional. We wanted a good singer, and Christine’s a great singer. But gender was never an issue. We just wanted someone who could do the job. It wasn’t a marketing strategy or something like that.  I mean, we’re scumbags, we’re not businessmen. Plus, she’s got the right attitude. At our second show, there were these two piss-ant kids who were making it hard for people to enjoy the music. Christine grabbed one of them and smashed his face on her knee and then threw the other one across the room.

Do any of you guys skate?
We all used to, but I just got too fucked up doing it. I can’t even ride a bike anymore because I can’t play drums after using my legs like that. I don’t know why. Plus, I just don’t wanna break anything. Everyone knows the story about James Hetfield breaking his wrist skating and having to cancel shows on the Master Of Puppets tour. I think I actually read that shit in Thrasher.