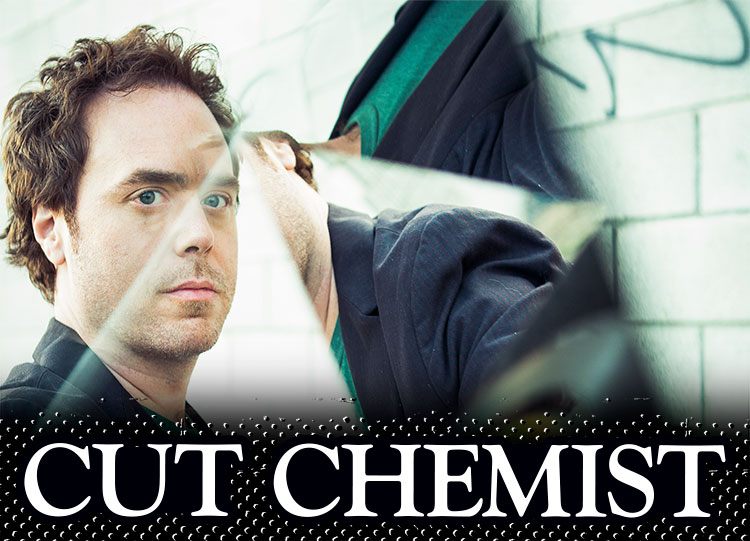 After falling in love with scratching in the early ‘80s, Cut Chemist immersed himself in Los Angeles’ infamous Good Life Cafe scene. The eatery’s open mic night was a hub for underground hip-hop and cultivated a myriad of legendary artists, including Jurassic 5. Cut, who has been part of the influential crew since its 1993 inception, has flourished over the past two decades, establishing himself among the upper echelon of talented turntablists. As the former Unity Committee DJ readies his first album (Die Cut) since 2006’s The Audience’s Listening, he made time to talk Biz Markie in a shiny green jumpsuit, mainstream success with Jurassic 5 and the monumental role The Good Life Cafe played in his career. —Kyle Eustice

What did The Good Life Cafe scene mean for LA hip-hop?
The Good Life open mic night on Thursday nights meant a lot of things for LA hip-hop. It was an escape from the gangsta-rap scene LA got famous for. Even though gangsta rap happened there and it was located in South Central, its primary goal was to expand creativity with the art form of rap. Many groups did just that, but most notably, Freestyle Fellowship took it the furthest by fusing jazz, scatting, rhythm and music theory together in their performances. Other LA staples found their beginning there such as Volume 10, Skee-Lo and Kurupt, just to name a few.

How did it play a role in your life?
I was very inspired by Fellowship’s take on jazz and music theory thanks to their drummer/producer Darryl Moore. He was an older cat from the East Coast who toured with known artists and brought his live-music knowledge to the group. Fusing that with the other producers—O’Roc, Mathematics, Kiilu and J Sum—it created such a unique palate of music that I never heard from anywhere. For the first time, I was truly proud of Los Angeles’ contribution to hip-hop. It didn’t sound like gangsta rap or a generic version of East Coast hip-hop either. It was its own thing. It definitely had a huge influence on what I considered my opus a few years later called “Lesson 6: The Lecture,” which utilized time-signature changes and jazz samples with my usual “deep crate” drum breaks.

Jurassic 5 formed out of Rebels of Rhythm and the Unity Committee, two groups that were regulars at The Good Life Cafe. What about your personalities gelled?
It was through the love of old school hip-hop. I remember talking to Rebels about our favorite rap records. I think Drum Machine by MCA & Burzootie on Def Jam would come up every time. I was a huge collector of old school New York hip-hop even then. I would play them my park jam tape collection from the early days. Rebels already sounded like a Treacherous Three, to me, and that was not something one would find in LA. Just at a time when I was loving the Good Life LA sound, we switch it up and come with a plan to do something so old school New York as an offering to The Life. I couldn’t help myself. I wanted to utilize Rebels’ sound with my production when I first heard them perform. I had already heard it in my head: the sound that would become Jurassic 5. The song was called “Unified Rebelution” and it featured my group Unity Committee. I pressed up 500 copies and sold them out the trunk of my car in the Good Life parking lot. This was September of 1994.

What did it feel like when you started finding more mainstream success?
We weren’t in Kansas anymore, that’s for sure. It was an entirely different life dealing with major labels and competing for attention against other major label acts. We kept it fun and different, though. The Nelly Furtado, Big Daddy Kane and The Beatnuts collaborations were a lot of fun.  I think “Thin Line” is my favorite song that I ever produced for the group. It was so unexpected from what I thought it would be when I made the beat to what became the end result. Akil wrote a great chorus. The guys wrote short and tight conceptual verses and the icing on the cake was having Nelly Furtado. It was so perfect to me. It still held on to the naive kid feel from the EP and yet had an upgrade to the group’s complexity, and even crossover potential without compromising our integrity.

J5 has broken up and gotten back together. Is it better this time around?
It’s better because we are all older and in the phase of our lives where we don’t have time for drama. We show up to do the work and that’s it. The shows are still as fun as they ever were because that magic never left the stage for us.

You’re about to drop your new album Die Cut. How long have you been working on this album and do you feel like you’ve pushed the boundaries of your craft with this one?
I’ve been working on it for about eight years. This one took me awhile because it reflects so much personal life stuff—father passing, going to jail. I had to figure out how to put that all to music. Through songwriting with real instruments/musicians and MCs, I’m pretty happy with the result. It’s very different from my last album, which was more of a guy making a fun album by himself with a couple of collaborations here and there. This one is heavier handed, emotional and takes more chances musically. I play guitar on a couple songs and even do some background singing. Don’t let that scare you, though. I still do sample work and scratch on this album along with some great friends on the mic, including Biz Markie, Myka 9 from Freestyle Fellowship and Chali 2na. Edan, Mr. Lif and Hymnal will be returning for more, too.