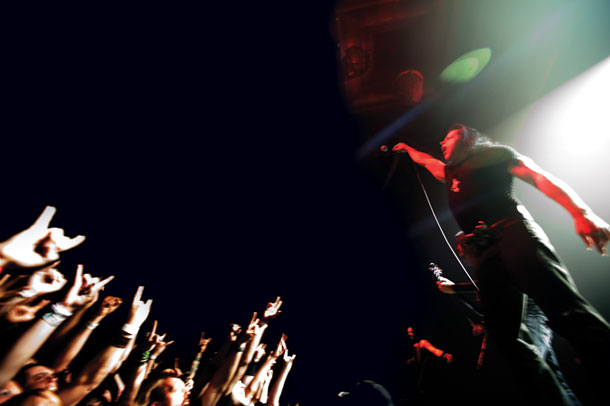 You have different generations of fans who like everything from Earth AD to the new album, Deth Red Sabaoth. What is it about your music that’s so accessible to so many people?
I’m lucky that my old fans have stuck with me, and the new fans that come on board are really into great music. They like Danzig, and they like other stuff in different genres—but they like real shit, not the phony shit. And that’s the thing that I’ve tried to keep from back in the punk days: Keep it real.

Is there anything that the kids of Thrasher magazine should know about rock and roll?
I do not play rock and roll. Chuck Berry plays rock and roll. I play some weird hybrid off-shoot that’s more violent, much more
crazy, and much more aggressive. It’s loud, it’s obnoxious, it’s in your face, and that’s what I play. This isn’t anything that I’m just making up—I’ve always said that. This is something different, and it should be. Everybody should take it and make something new out of it. And that’s what I look for.

Are you recording straight to tape still?
We record to tape and then dump it all into ProTools. But we don’t go to somebody’s room, we stay in the studio. We go out
and do a guitar track, and it goes through the board and into the rig. The drums are all done analog, to tape.

Why do you think the hardest thing to record is drums?
Drums are everything. It’s like martial arts.  If your house has a weak foundation, it’s going to crumble. Drums are the foundation of your music. So if you have a crappy drum sound, you’re going to have a crappy record. I do the Clap Test in every room I record in.

What’s the Clap Test?
You clap, and if it doesn’t sound right, you’re outta there.

Listening for the resonance?
Exactly. Otherwise you’re not going to get a good drum sound. Some people don’t know a lot of that shit, and they rely on a producer who costs a gillion dollars, and he don’t know it sometimes. It’s one of the cool things about working with Rick Rubin. Rick is really in tune with drums.

I’ve read that you could play pretty much the whole record if you needed to.
Yeah, I can still play. Not Tommy’s leads, I couldn’t do that. When you have somebody like Tommy doing leads, it’s like, just let him do it. He’s one of the most underrated guitar players out there.

This is the last night of the tour. It’s been fun?
It’s been fun. I always swore I’d never go on tour before the record came out. I really have this thing about going out before the record releases, because we did it once before and it was a disaster. Nobody knew the songs, that kind of stuff. But I have to say that nine out the 10 nights, people we’re singing “Wicked Night” in the front, and it’s only available on iTunes or something.

It’s the double-edged sword of having downloadable music available.
I hate mp3s.

But as a distribution mode?
It just sounds terrible because it’s a small file. When you’re talking about a CD, each song is about 28 to 33 megs, and a digital download is three megs. When I hear people playing their iPods, it sounds weak, like an old AM radio with a little speaker in it. It sounds all compressed and creaky, and terrible to me. And OK, if that’s what you like, fine.

It’s almost as if they’ve never heard the difference.
They’ll be like, “Wow, what’s that?” I have a cassette player in my car. I have an eight-track down in my basement. Eight-track sounds great because it’s half-inch tape, and it just sounds… Full. Big. And that’s how I like to hear my music. So if I hear a band that sounds wimpy, I’m gone. I’m outta there. It’s not going to work for me.

Can I ask you one silly question and then that will be it?
What is it?