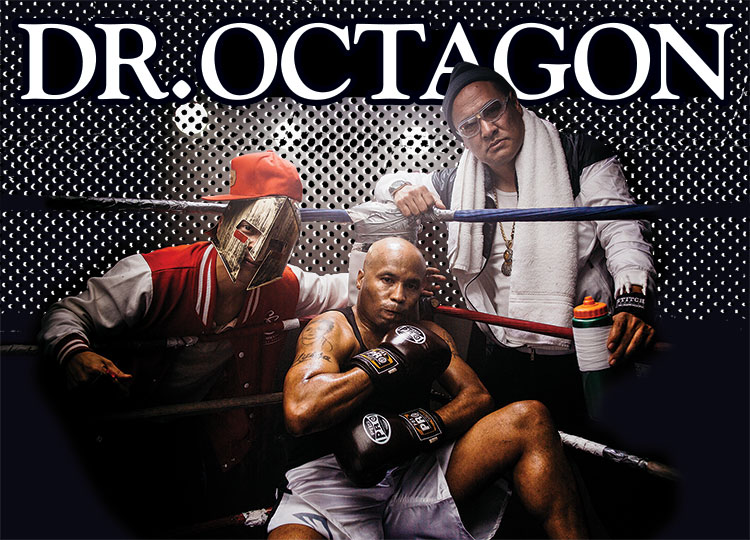 In 1996, the hip-hop landscape experienced a monumental shift in sound when  Dr. Octagon released its seminal album, Dr. Octagonecologyst. Crafted by Kool Keith, Dan The Automator and DJ Qbert, the project strayed from the formulaic sound at the time and delirvered otherworldly production. Coupled with Keith’s futuristic lyrics and Qbert’s impeccable scratching, it quickly became a classic. In celebration of the album’s 20-year anniversary, the Get On Down record label has reissued it on vinyl, and  Dr. Octagon officially reunited for two of their first live shows ever in San Francisco and  Los Angeles. At a recent Denver show, Dan The Automator confirmed an entirely new  Dr. Octagon album was, in fact, ready to go. Keith, Automator and Qbert took some time to chop it up about the reunion shows, what made Dr. Octagonecologyst a breakout record and why Keith sometimes feels like Wolverine. —Kyle Eustice

Would you consider Dr. Octagonacologyst your breakout record?
Dan The Automator: Oh yeah. I mean, ultimately 100 percent. I had done Endtroducing with  DJ Shadow, but that was all at the same time.

Why do you think it worked that way?  Just because it was so off the wall?
Automator: I think yeah, but I don’t think that’s exactly the reason. In retrospect, it was good, but it was also artistically free. What I mean by that is it didn’t really cop to what was going on at the time. We weren’t rhyming over a bunch of jazz beats or something. When it came out, it was kind of like a breath of fresh air for listeners. People enjoyed the record, but even more so, other musicians really enjoyed that record and it really opened up a lot of opportunities.
DJ Qbert: Everything was on a jazz tip back then but this was a more psychedelic tip. It was right up my alley because I used to take a lot of acid.

That explains a lot.
Qbert: Mix Master Mike came to the LA show, and he’s, like, “Q, I used to take a lot of  acid and ’shrooms to this album.” He’s my partner and I didn’t even know he was  into Dr. Octagon.

How did your first ever live shows go?
Automator: They were better than I thought they’d be. Basically, me and Keith have talked about it for the past couple of years, but I was busy and he was busy. We were talking about getting together, and then we did it and it was a nice hybrid of band and hip-hop stuff. When I was working on getting the show ready, it was interesting to me because I realized the whole Dr. Octagon record was a very heavy synth record. I didn’t realize how much synth was in there. It brought a whole different dimension to a rap record, just with the sheer amount of synth. Not that synths had never been used before, but it was used in a certain way. Doing the shows, it was exciting to deconstruct the record and get together. We are doing more in June. They turned out really well.
Qbert: Yeah, they got sold out! I was like, really? All these fucking 40-year-old fans? That was cool. Kids came too. It was a mix of all kinds of ages.  I didn’t know it would sell out. I could not believe that. I thought we definitely had something there.

Did that make you confident in doing a second record because obviously the demand is so high?
Qbert: I didn’t care if one person showed up;  I would do 20 Dr. Octagon records. I love the music and the whole concept.

Do you find you’re shy in front of a bigger  or smaller crowd?
Keith: Smaller crowd is more critical. They’re a more studying crowd. Like they came there to intimately study you, you know what I’m saying?

I read you once said you don’t even feel like a human being anymore. What makes you feel not of this Earth?
Keith: I think people think you’re not normal; like you don’t go to the store and shop at the supermarket. People don’t think you pick up your cookies, milk and cereal. I think people start thinking you don’t gotta go to the doctor or something. They think you’re just living through aliases and albums, and your life is like some superhero living on top of buildings; like you’re Wolverine or an X-Men with all these powers. Some people think you’re some guy somewhere with green hair, green eyes and eating green food. After all the trips, shows and tours, people see you in the airport and want to take a picture with  you. But when you get off those planes, they’re not going back to your reality with you. They’re not going with you to Dunkin’ Donuts to get a coffee. They just see you as an artist who has  no problems.

What’s this new album going to sound like?
Qbert: I scratched on eight out of the dozen songs on the record. There’s even a cut where Kid Koala and I battle each other. We just go back and forth. Del the Funky Homosapien is on there, too, and that’s all the same song. All four of us are on it: me, Koala, Del and Keith. We take turns battling. Dan was telling Del to battle Keith in the lyrics, so they’re really going at it. I’m trying to kill it too.

Del has probably done a lot of acid too.
Qbert: I hear that. He’s probably on it right now.