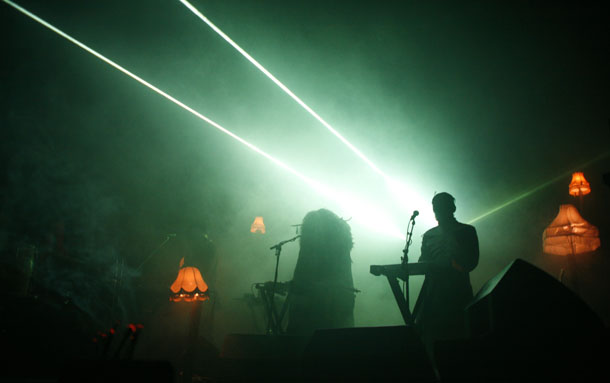 Completely back lit and covered in fog, incense, and lasers throughout the entire show, the audience could barely make out the bizarre and elaborate costumes worn by Fever Ray and her touring band. The ten or so antique lamps that surrounded them, dimly lighting from time to time in sync with the beat, would provide the only glimpses of detail. It seems that the point was to create a mood and let the music speak for itself. And it did—like some sort of apocalyptic thunderstorm. No one was left unmoved. I was one of the fortunate few who had the privilege of meeting the mysterious woman behind the giant buffalo headdress, white face paint, and eerie vocal pitch shifting herself: Karin Dreijer Andersson. She’s one half of Swedish electronic duo  The Knife and now creator of her solo, self-titled album Fever Ray—easily one of the best and most unique albums of 2009.

With The Knife you said you like to dress like the music. How does the Native American imagery relate to Fever Ray?
It is Native American or Inuit, but I think it has elements of many different primitive cultures. It’s more of an inspiration, because Andreas Niilson and I sent each other pictures and film clips of things that we wanted to put in the live show and the first video, “If I Had A Heart.” We also have a group of people in Sweden called Sami, who back in the days took care of the reindeer, raising them up in the northern region of Scandinavia.

So they are kind of like shepherds?
Yes, reindeer shepherds in the snow. You can also find elements from Eastern Europe and New Guinea too.

A lot of the reviews I’ve read have said things like “pagan, sacrificial ritual,” “eerie” or “devilish.” But you said before that you feel like your music is very “white” or “hopeful.” So I wondered if there was a reason behind making such a contrast.
I think it’s very hard to tell. For me it may have started out as more dark. But I think when working through it after a year, having really been digging into every subject and every angle of every song and idea, I think it becomes less dark. Absolutely. For the live show, I don’t know. I think it’s an interesting feeling, fear, and what you find frightening or scary. Because mostly, I think when you really start to investigate why it makes you afraid, suddenly there is nothing substantial in it anymore. It’s like the first feeling you had, if it was a bit frightening, it disappears right away.

So what kind of things scare you?  Were you afraid of monsters as a kid?
When I was a child I was afraid of many things. But mostly things like being left alone. Not so much monsters, and I’ve never been that afraid of the dark. Today, I think it’s more like losing your sense of emotion. Like waking up in the morning and not having any feelings.

That’s a fear of yours— becoming numb?
That is, I think, my biggest fear.

Does that relate to somehow to settling down and choosing a normal life over the life of an artist?
Yes that could be it. This past year touring, we met people who tour all the time. They  are very afraid of settling down. Because I normally don’t do this, I like to have both. I like the peace and quiet at home. I’ll be working in my studio for at least a year on a new album. And after that I might go away touring again. It’s very nice if it’s possible in the future to do both.

In your bio you said you were thinking about quitting. Do you have other interests that you would want to pursue outside of music?
Uh… no. My husband thinks it a bit boring that I don’t have a hobby. Maybe I would like to open a vegetarian restaurant in Stockholm, because there are so few. I don’t think so far ahead in the future. I don’t really know what will happen. But I will be doing this next year and then we’ll see.

Tell me about the Miami Vice influence.
I watched it when I was a kid, but  I think now, that it’s only the first season that you can watch. After that it becomes really bad, really awful actually. But it’s good that it’s Jan Hammer who did the music, it’s very beautiful. And it’s nice that they use music in a way that you don’t find so often today. Like they have long parts with only music and pictures. They’re like short music videos, and they use the music to tell a story.

What things makes you laugh?  Are you into comedy?
Oh a lot of things. Trailer Park Boys. I love that series, and Superbad. And in Sweden, there are two women who make a comedy TV series. They are fantastic. They have also started to use the pitch, voice transforming.

Really? Do you feel responsible for that?
Maybe. I have a friend who is also friends with them. When one of them plays the main character, a really boring one, they shift her voice, so it’s very funny.

What did you think of that Swedish vampire movie Let The Right One In?
Sometimes I find certain imagery too similar to advertising. It has this very crisp and fresh look that I find it a little bit hard to separate.  I know the guy who filmed it, and he does a lot of commercials. I like it a lot, but I still think the book was better.

What’s your favorite Alphaville song?  I read that you were an fan.
“Sounds Like A Melody.” It’s good. They know how to make very beautiful sounds. Those guys are still touring.

What do you think of seeing bands like that, this late in their career?
It’s been very strange this year. Since we have been touring, I’ve seen a few bands that I’ve never seen before from the early ’90s, like The Pixies and Jane’s Addiction, but I almost wish I hadn’t seen them. I felt like it was more of a nostalgic feel, which was not really as good as the real thing back then. But then I also saw Jesus Lizard, which was fantastic now.

Is there a show you wish you could go back in time and see?
Laurie Anderson, “Home of the Brave.” I’ve seen her twice within the last couple of years. She used a lot of very modern techniques in the ’80s, like MIDI trigger.

I see that you’re doing more live instrumentation with this tour.
It’s very nice when you can work with the dynamics during the show, and it’s different from day to day, which is good. It’s a lot about how everybody feels, if the day  has been good, and if you’ve had enough sleep. There are so many things that should fall into place, which is  very interesting.

More room for error  or nuance.
Yes.
And The Knife wrote music for an opera?
Yeah, it premiered already, so now we are working on the studio version. Hopefully it will be released in January.

Is it mostly instrumental?
No, there are three singers live. A classical soprano, pop singer, and an actress as well.

So all three of you did the music?
Yeah. It’s a special project, since it was commissioned by a theatre company. It will be very nice to hear the final studio version of it.

Are you still running Rabid Records?
Yeah, Olof and I.

So I assume you’re making a living off of your music now?
Yes, I do. I have many different small things going on. This, The Knife and I do collaborations, so in the end it works...hopefully.

Does money ever effect your song writing process, where you think, “Will people like this?”
No, I think that is very bad to think about that. But I see the label work as my day job. Its very administrative, and you have to do accounting, etc.

Will you be writing another solo album?
I don’t know yet. I will start working again in January. Maybe it will be with my brother or maybe it will be on my own.