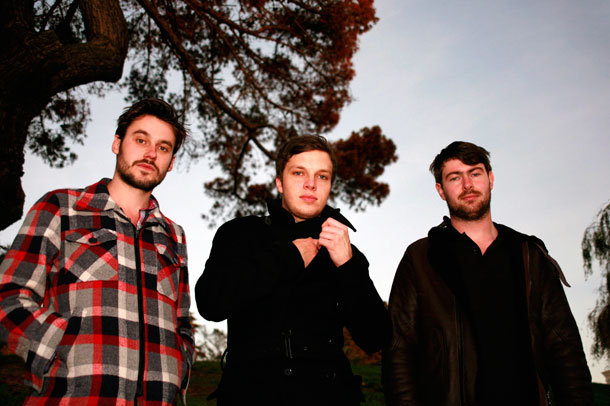 It seems that almost everything there is to know about Friendly Fires can already be found online. Between MySpace and Wikipedia, my job is almost obsolete. I would have even known about their stage presence—what some other writer dubbed “snake hips”—had I bothered to look for some concert footage on YouTube before our interview. Or I might have  just found a video of front man Ed Macfarlane choking a girl on stage in  New York. More about that later.

So do you guys skate?
Ed Macfarlane: I used to, but I was never really good. If I was to break my wrist or something like that...
Edd Gibson: Jamie from The xx is really good. He was tearing it down Hollywood  Boulevard yesterday.
Jack Savidge: I saw him do a kickflip.  He actually landed it. I’ve never seen  anyone I know land a kickflip.
EM: There are loads of kids in the streets  in the UK failing to do kickflips all the time.
So you were in LA yesterday? How long has this tour been going?
EM: We’ve been touring nonstop for the last year and a bit.

At what point did you decide to quit  your day jobs and support yourselves making music?
EM: I think it was relatively early in our career. When we first made a MySpace page, however many years ago that was, we sort of had a lot of interest from the get-go and we started touring pretty early on. If you’re touring that much there isn’t really time for a job.

How much of a role do things like MySpace play? Was it crucial?
JS: I feel like at that time it was more important than it is nowadays. At the time it was quite revolutionary in that you’d have people on there and bands on there and they’d be friends and have that direct connection sort of thing. Now everyone’s got a MySpace page.
EM: I think nowadays the Internet in general has taken a lot of fun out of music—in the sense that it’s just so easy to find out everything about a band in the space of minutes. You go on Wikipedia or you go on MySpace and you’ve got their music and their pictures, it kind of takes away that element of discovery. But at the same time you get to hear their music really quickly, so it’s a double-edged sword.

Tell me about your origins.
EG: We were all in school together in  St Albans. Ed and Jack were in a band with a few other members who are no longer about—
JS: Yes, they’re all dead now.
EG: I joined up and we would just kind of go and cover pop punk music after school. It was just a way of hanging out before we were old enough to go to bars and things like that.
EM: St Albans is a suburban town outside of London. It’s really beautiful, but really lacking in things for young people to do. Which I think really benefited us in a way. Every few months we would play at this tiny place that was really the only music venue in our town. We would just rehearse solidly for that show and play to like 10 of our friends who had seen us play a million times. By the time we got to London we kind of knew what we were doing.

Have you been playing instruments  your whole life?
EG: I was in a band before I played the guitar. I learned on the job.
JS:  I’ve been playing the drums since I was about 12. I just thought it would be fun so  I started getting lessons at school. It was as mundane as that.
EM: I was friends with a guy who played the guitar, and I was like, “Yeah, let’s start a band and play Deftones covers and Green Day covers and stuff like that.” And then Jack was the only drummer in the school...
JS: That’s not true; you always say that.
EM: Ok, there were two other drummers, but one of them was a jazz drummer and you were kind of the...
JS: I was the rock monster.

Your songs have popped up in all kinds of ads. Tell me about that. Does it pay well?
JS: You don’t get paid as much as some people would imagine. It’s not like we’re suddenly sorted for life or something. But it certainly does help. And it pushes your music into other territories.
EM: I think it’s one of the few ways that bands can actually make some proper money. Or actually see some money coming their way. You can sell lots of records but the amount of debt is inevitably going to be greater than what you sell. I think we have to sell something like 350,000 records before we can even go to our record label and ask if we’ve made any profit. That’s just how it works. The money that we make is generally from our music being played on the radio or from playing a concert.

Best and worst experiences so far?
EM: I think one of my worst experiences was in New York. This girl got on stage and wouldn’t leave. It was kind of annoying because it was just this one person dancing and everyone was watching her like, “Who the fuck is this person, and can they kindly get off the stage?” The bouncer tried to get rid of her, then our tour manager, and then I tried to push her off. And now there’s a YouTube video that essentially looks like I’m strangling this girl on stage, which I wasn’t really doing. I think. Of course it doesn’t show what happened after that, when we invited the whole crowd on stage and we had a massive stage invasion and it was really fun, and I apologized for kicking that girl off.
EG: Music videos aren’t fun. They’re not natural, they’re not comfortable...you have to be an actor. I picked up a guitar so I wouldn’t have to do that kind of thing.
EM: They’re a bit contrived. “That little dance you were doing earlier—do that over and over again for an entire day!”
JS: I think my least favorite thing was the red carpet awards ceremony for that MTV thing.
EG: It was the Woodie Awards so everyone’s making puns about erections...
EM: And we had just flown over from the UK so we were incredibly jet-lagged and felt like shit and someone’s like, “Alright we’re going to do the joke round next!” And you’ve got to try and be witty and come up with something remotely good to say and inside you’re just feeling like death.
EG: And we didn’t win.

Who did?
EG: I can’t remember, I’d never heard of  him before.
EM: The guy had billions of friends on MySpace. I think that was the reason he won.
JS: It was really annoying because it was the first award as well—I didn’t even realize the whole thing had started and then suddenly we’ve just lost.

What do you think you’d be doing right now if not for this?
EM: You’d be a news reader. Jack did a Twitter post that said, “I think I’d be a good news reader,” and the BBC contacted him and asked if he wanted to.
JS: Yeah, so I’m going to be reading the news on Radio 1 at four in the morning or something like that. This is my big break! Come to think of it, though, if I’m going to become an entertainment reporter I’ll have to deal with that fucking red carpet stuff day in and day out...looking into the interviewee’s hollow eyes and knowing that they’re hating me.

Tell me something I can’t learn about you from Wikipedia.
EM: I had a dream that a crack addict was throwing a dead cat on me last night. Did you have any dreams last night?
JS: No, just fitful sleep.
EM: Lucky man.
© 1981–2022 High Speed Productions, Inc.