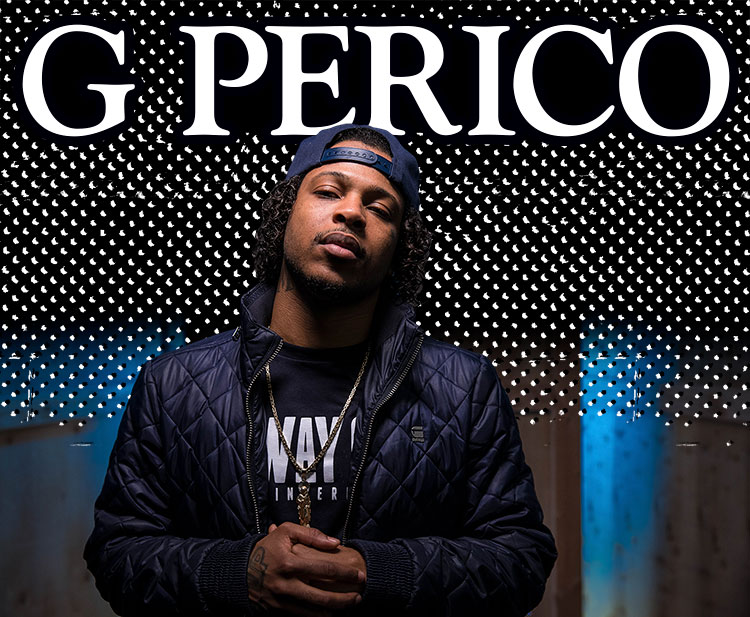 Rocking an old-fashioned Jheri curl, South Central native G Perico stands out among the seemingly endless sea of aspiring rappers. Coupled with his G-Funk sound, he’s catching the attention of countless industry tastemakers and hip-hop fans alike. His latest album, All Blue, is a culmination of years of hard work both in and out of the studio. While he doesn’t shy away from his gang affiliation, his priorities have shifted and all he wants now is to go worldwide with his music. If he keeps doing what he’s doing, that’s easily an attainable goal. While stopped at a gas station somewhere in Los Angeles, Perico had a few minutes to talk about catching the wave, getting shot last year and why he’ll never straighten his hair again. –Kyle Eustice

You’ve been called Los Angeles rap’s most promising new voice. I kind of have to agree. How did you get into rapping?
I mean, there’s so many answers I could give. Straight to the point—it was a lack of options. I didn’t really plan on doing shit else but being in the street, you know? I was kinda good with my pen. I was good in English class. That was the only subject I was pretty good in. I already had a trade—I just had to figure out how to get it to the people.

What did you love about it?
It just give you a feeling that I can’t really explain. That’s my best answer right there.

On projects like the Shit Don’t Stop mixtape and All Blue, you don’t shy away from your gang affiliation. Do you feel the more famous you get the bigger target you’re becoming and how has it changed how you function day-to-day?
I’m definitely more of a target. The place that I’m from in LA, before just the music, I was and still am real popular in the street. I was already a target because where I’m from, we don’t really get along with the other gangs in LA. All the big gangs—we don’t get along with them. I’m already used to being an underdog. Now that people know my face, I gotta move even more cautious. Even before Shit Don’t Stop came out, niggas tried to mow me down in front of the studio and shit. I gotta be careful, man.

Was that when you were shot last year?
That was pretty much my wake-up call. I started getting into the music and the industry started embracing me, and bringing me along, and I started seeing different shit and fucking with different people, so my gangster edge, or my street edge, it was kind of not fully all the way on point just based on moving around in the industry. I was going to big parties and being around millionaires, so my attitude was kind of different. I’d never been shot before and I’ve been in the streets in the worst shit. Normally that would have never happened. My mood was kind of relaxed, so that was a sign I gotta be all the way on top of my shit. When I’m around the hood, I like to spread love, but I gotta be straight-faced—no bullshit, no nonsense. I’m trying to last out here.

I heard you finished your show later that night once you were out of the hospital.
I’m on a mission. I can’t let nothing stop me.

Now that you’ve caught this momentum, what are you going to do next?
I’m pretty much like a student at everything. Even when I got involved in the streets, I wanted to know about everything—like who’s who and what’s what and how it worked. That’s how I acquired my street status. I’m pretty much the same way in this music. I’ve just been studying everybody who got success that I admire—how they do it, studying they moves and different formulas. I’ve got a few things up my sleeve. I don’t want to speak on it too soon, but I’ve got a few plans. Even though I like the position I’m in and respect it, I don’t want to stay in the same position. I want to grow, evolve and get bigger.

Who does your production?
I work with the same people. When I first started, I couldn’t get nobody to work with me. People were scared to come around to the hood or too big or just too busy at the time, I guess. That’s another reason I don’t do a lot of features. I reached out to, like, everybody in LA when I first started rapping and not one person fucked with me. Nipsey Hussle and AD have been the only people who have embraced me so far. As far as production goes, I just stick to Poly Boy, my boy Westside Webb and Kacey Khaliel. I try to keep a sound going so you can play it all through and it’s not all over the place.

We gotta talk about the Jheri curl. You gotta explain this to me.
I just jump in the shower and let my hair get wet a little bit. I got some finishing lotion that I use. That’s pretty much it. It’s not really too difficult. It’s like somebody if they got waves, they gotta brush their hair or whatnot. And I don’t even have to do it every day because my hair keep that texture for a few days. Every couple days, I put my styling lotion in, get up and go. It’s not really heavy maintenance. It’s easy.

I’ve seen a couple photos of you with it straightened out too.
I’m probably not never pressing my hair again. I pressed it for a couple videos and it had my hair too dry. My shit started breaking off and shit, and I’m, like, "Nah, it’s not my thing."