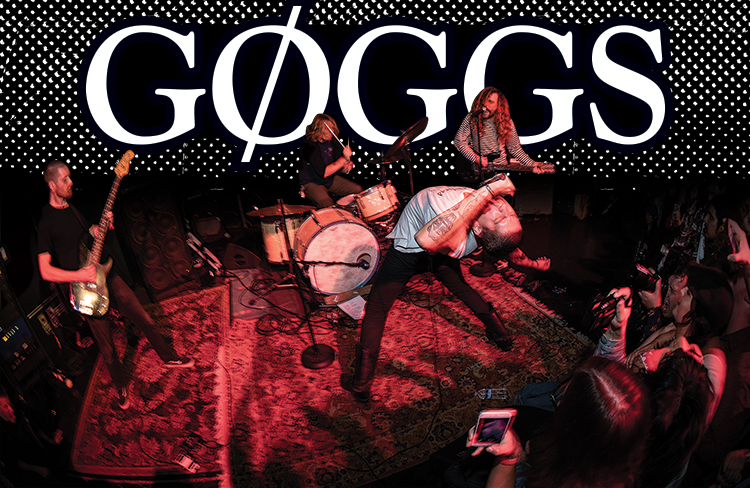 In 2016, longtime friends and bandmates Ty Segall and Charles Moothart joined up with Ex-Cult frontman Chris Shaw, forming GØGGS; a toxic display of some of the most raw and pure punk rock energies to come out of this era. Unleashing their self-titled album completely out of nowhere and playing only a handful of shows after its release, the members split off shortly after to continue onward with their already established garage outfits (Ty Segall and the Freedom Band, CFM, Ex-Cult), leaving the world to wonder if they would ever return to offer up another dose of their septic perfection, or if they’d be deemed another side project to lay to rest. While sitting down with Chris Shaw for this interview, he assured me that Gøggs is not a side project, and by the time this interview drops they will be releasing their second album, Pre-strike Sweep. I wish he’d never told me that, because I have been waiting impatiently ever since. —Jimmy Astleford

How did you meet your bandmates, Ty and Charles, and how did GØGGS come to be?
I met Ty for the first time in Nashville when I interviewed him for a zine I was doing. I met Charles shortly after, or maybe it was even that same night. I met Ty through interviewing him and we just kept in contact. I don’t even know how he got my phone number but he called me one night and said, “Hey, we’re playing in Memphis. Do you want to come out to the show?” So they ended up staying at my house that night. When Ex-Cult started he saw some of our very first shows. We were friends for a couple of years before I even formed Ex-Cult, but anyhow, he ended up producing our first album and took us on a full US tour and up into Canada. At that point we were spending a lot of time together on the road talking about how cool it would be to play music together. That was in 2012, and I think in 2015-2016 is when it actually happened.

What’s the background on the name?
Ty came up with the name. I honestly have no idea how he came up with it. He just called me up one day and asked me what I thought about naming the band Gøggs. I was, like, “That’s cool with me.” Honestly, naming a band is sometimes the hardest thing so I was stoked to have someone else do it.

How do you pronounce it?
Just GØGGS. It’s a made-up word. You can pronounce it however you want. It knows no pronunciation. It’s kind of funny to hear people who like the band come up to us at shows ’cause you never know how they’re gonna pronounce it.

I was at In The Red fest, and that was your guys’ first show. That was insane! Its not often that you hear of a band playing its first show after they drop their album.
We kind of did things a bit backwards in terms of how bands would normally play their first shows, where you would play as many songs as you had to a group of friends in a small venue then kind of go from there. We did it completely backwards. We dropped an album and then played a sold-out show. It was honestly pretty nerve-racking, but that was a sick first show.

I wasn’t expecting Ty and Charles to switch back and forth between drums and guitars during the set. Those dudes are pretty damn well-rounded when it comes to making rock ‘n’ roll. Do you play any instruments at all?
No, I just sing.

Hey, and that’s fine. Musically, what are some of the band’s main influences?
When the first album was finished we were all, like, “Damn, this could be on some kind of Skate Rock compilation or something.” We’re working on a new album that’s a lot heavier, a lot weirder and influenced by a lot of heavier shit compared to the first record. The first record was a punk record, but this one goes a little further. It’s just way gnarlier. I don’t really know what other bands I would compare it to.

The first record was so good, man. It reminded me of Black Flag on steroids, with guitar leads in there that were reminiscent of some of the GG Allin and The Jabbers stuff.
Yeah, there’s definitely some of that on the new record but it’s just a lot heavier.

Are any of you guys into skateboarding?
Yeah, I got into a lot of music through skateboarding. One of the schools that I went to in Florida had surf magazines and skate magazines in the library, but they would take sharpies to some of the shit in them to censor them. I would pick those up and read through them. I grew up in Florida, then moved to Tennessee, and I feel like both places had pretty good skate scenes. Skateboarding was a gateway into music. I think the first time I ever heard Roxy Music was from watching skate videos, and now Roxy Music is one of my favorite bands.

T-Funk skated to a GØGGS track in The DC Promo, and Thrasher just used one of your tracks in the Skater of the Year edit a few months ago. Are you stoked to see your shit being used in these vids that are coming out?
Yeah, I think it’s fuckin’ rad, man. It’s honestly the coolest shit that our music could be in. I would be down to only do that type of shit if it could work out like that. Fortunately, GØGGS makes the type of music that people seem to want to skate to, and although it’s all shit I’ll never be able to do, it somewhat makes me feel like we’re a part of it and that’s fucking cool. I’ll always be down to check out new skate videos and the fact that I’m in a band that people want to skate to, well, that’s a privilege.

In 2016 when I heard the first album, it was really refreshing to hear a new punk album with that much energy and grit. It wasn’t ’til after a few months of listening to the album over and over that I actually read the liner notes in the record and noticed their were cameos on the album by guys like Cory Hanson from Wand and Mikal Cronin. Were those guys randomly thrown in there? Was that planned or were they just over one day when you were recording?
Yeah, pretty much. Cronin was probably planned but the other people on the album were just around while we were recording.

That added a cool element to me, like it is a communal sort of thing.
Yeah, that’s how the first album differs from the second one. This one will have no guests. Michael Anderson joined on bass when we started doing live shows and he plays bass on the new album, so he was an addition. He’s in the band now. He got jumped in.

With the first album, I was a bit worried that it was a one-and-done sort of thing, but you mentioned in an interview that it isn’t a side project, “It’s a necessity.” Considering you already play in Ex-Cult, a high-energy punk outfit, what was the necessity to start GØGGS?
I think just the possibilities of what that group of people could create together, already trusting Ty in the studio with the other band I play in, Ex-Cult, and also just being a fan of his. There was a reason I wanted to interview him before I met him. I think that’s something you just need to make happen and see what happens from there. It takes a lot of pressure off of us as far as people’s expectations go. It’s fun. There’s no pressure. It’s whatever we create. Up to this point GØGGS has done everything on our own terms. I guess it sort of ties back to what I was saying about the first show: GØGGS kind of does things the way that we want to and we don’t follow the typical model of a band, I guess.

When you guys finished the first album, did you have it set in your heads that it wouldn’t be the last?
I don’t think we really talked about it. I don’t think anyone made parameters, but I felt like their would be more. There is no reason not to do more, but there was no timeline on it. Don’t look to us if you’re that type of person who wants a new album every year. If you come asking what we’ve done for you lately, the answer is probably going to be “nothing.”

Tell me about the new album. It’s finished, right?
Yeah, it’s done—mixed, mastered, turned in and hopefully it’s out around the time this interview drops. The first album was made pretty rapidly compared to this one. We definitely took our time with this one. The last album we had all the music written before throwing down the lyrics, but with this one we pretty much wrote it all at the same time and it was a collaborative effort. We had a lot more time on this one because I have moved to LA since recording the first album. We also played a few shows and got to play some of the songs live as we were working out the kinks, which was fucking rad. To me, anyway, as a vocalist, I feel like once I’ve played it live a couple times it can change for the better in the studio.

Will there be any tours around this album?
Yeah, we’re definitely going to do more. The last time around we only hit a few cities here and there, but also we’re not the type of band that’s gonna roll out a massive tour. If you wanna see us play in certain cities you might just have to see our other bands.

Any last words?
I would want to thank Larry Hardy at In The Red Records, the master and commander. Thanks, Larry.