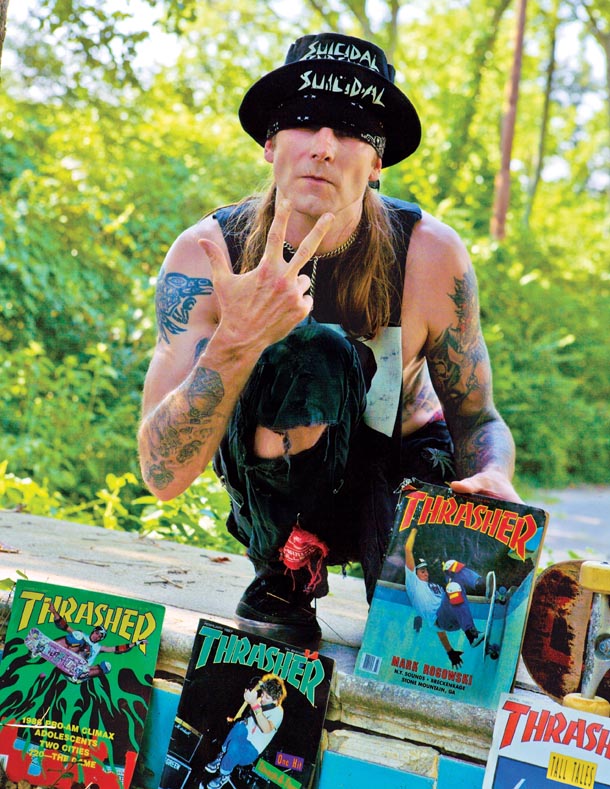 "...country as good or gritty as it can be."
Photo by Segroves | Interview by Lance Conklin

Once upon a time, while I was working with my good friends at Vox footwear, there came an opportunity to do a tradeshow party with Hank Williams III. I jumped at the chance since I was already a fan going way back, and it was a way for me to meet one of my country heroes. Now, some of you’re reading this and thinking, “Country!? Fuck that!” Well my friend, all I have to say to you is read on, and you’ll discover something special about this skateboarding, mud-bogging, punk-rock-country singing mother-fucker! And yes, he may be the son of that one guy and the grandson of that other guy, but he’s all Hank III. His new record, Damn Right & Rebel Proud,  is out Oct 21st… Enjoy!

Name, rank, and serial number?
Shelton Hank Williams III and, shit, my rank? Underdog. Number? Would have to be 12/12.

I believe that you don’t go looking for skateboarding, but that skateboarding finds you. How did it find you?
Honestly, I was on tour with my dad, and it was my first time in Florida. The Sex Wax  T-shirts were real big back then so I finally got to go into a real skate and surfshop. When I was there I bought a couple of videos and officially bought my first real skateboard, not like a WalMart board or anything like that.

What board?
A Vision board with leopard print on it, but  I can’t remember what skater that was for.

Nice. What kind of wheels?
Man, I’m a little foggy; whatever Vision’s standard wheels at the time were. But I tried a few of the OJ II’s. I remember going through bearings like crazy, trying to keep rolling fast ’cause half the time it was on the street and the other half we would be going down a pretty decent hill. But that’s what first got me into it, watching videos like Future Primitive and all the Powell Peralta videos. I got off on all that shit, and the soundtrack, too. Just the whole concept. Dogtown and Suicidal Tendencies  just brought me in even more to the scene when I got turned on to this stuff through Thrasher. It was starting to click.

Is that how you got into punk rock?
I was already into Kiss when I was like 10  or 11. I got my first set of Kiss records and Black Sabbath so I was already into heavy shit, but I was living in Atlanta when I was 14 and the independent radio stations were playing it.  It definitely helped turn me on to bands that  I would have never gotten into like Poison Idea, Gang Green, and DOA. I’m not sure if Thrasher got me into Suicidal or their crazy video that they had out—one of the two, but it went hand in hand with the attitude and the energy and kids’ look. I was growing up. A lot of kids dressing in black and rebelling. All the kids who had ramps in their yards were half-way rebelling, but not as much; they had the family money to make due. The very first time I ever got to skateboard Venice Beach; I was like 15 years old and proud to be doing that. I cut the word “Suicidal” out of my grip tape. It was a trip for me, almost like dreamland.

What’s your skateboarding like these days? You still cruising around?
Yeah, I still do it, but I’m not as fearless as I used to be, damn it! And that’s about the only thing that’s coming into play a little more, but  I still do it and I run the dogs a lot like that if I’m on the road and have to take them with me. And there are a couple concrete parks around here. I still get my left leg pretty sore when I take it out and make the rounds. No new tricks, just grinding and ollieing or jumping out of the back of the truck and trying to land it. I do have a badass pool here at the Haunted Ranch in Nashville that’s been here since the ’50s, but it’s got 25-foot trees growing out of it. It’s still got the civil war stone fence around it; it’s wild.

We need to come out to the haunted ranch and empty that thing out.
That would be awesome. We could set up and jam, fucking have a party! We’ve been talking about it for years.

For those reading this who are unfamiliar with your music, explain what they’d be hearing if they went to a Hank III show.
Well, you would get the country as good or gritty as it can be. I always pay respects to that part of the show for 45 minutes to an hour before we go into the hellbilly and assjack, so it’s kind of a long process right now. But the country is so high energy that a lot of kids can identify with it. But it’s definitely the Jekyl and Hyde show—two extremes. One day we might mix it up a bit more, but for right now we pay respects to the older folks that still come out and give them a chance to leave before we turn it up. So just a couple of different styles.

Ford or Chevy, lifted or lowered?
I’ve always been a Ford guy since day one and I’ve always rode high; I’ve never ridden low. It’s a farming thing. It’s a mudding thing—putting your four-wheeler or whatever in the back of the truck and taking it way back in the woods or whatnot. I’m sure that’s why I’ve always been riding high. And if I get into a wreck I’ve always wanted to be in something that’s hopefully going to take a good impact. I like ’em big and loud.

When you were growing up, did you have a Daisy or a daisy pusher?
On the farm when I was pretty young there was always a Daisy around, but by the time I was eight I’d already killed a wild hog with a .410 shotgun. Just being around my dad, his big thing is guns, so I got introduced to guns and hell. I remember this one time when I was maybe 10 and I got to shoot a .44 magnum, and he got a kick out of it; it hit me in the face and all that stuff, so I definitely grew up with it. But when I was real young, definitely a Daisy.

You’re still pretty Green Room these days. Didn’t you get the cover of High Times?
Not the cover, but I was definitely in there a couple of times. They gave me a good few-page interview. I think four or five different times I had number one in the very back on the top 40 list and got to play a High Times party with Mike Watt, and the drummer from Jane’s Addiction was there. You know I’ve always had a good relation with those people. Meth is killing America, not weed.

You’ve been tattooed by Paul Booth and…
Paul Booth and a company called Dancing Dragon; I don’t want to fuck their last names up, James and Chris at Dancing Dragon in Oak Grove, KY. Sean Cummings out of Philadelphia at Wizard World Tattoos. Capital City Tattoos in Madison City, WN; they definitely made me feel the pain. I’ve met a lot of friends that way.

You want to say anything else?
Stop skate harassment.

Listen to Hank III on the iTunes store here or check out his myspace for tour dates.
© 1981–2020 High Speed Productions, Inc.