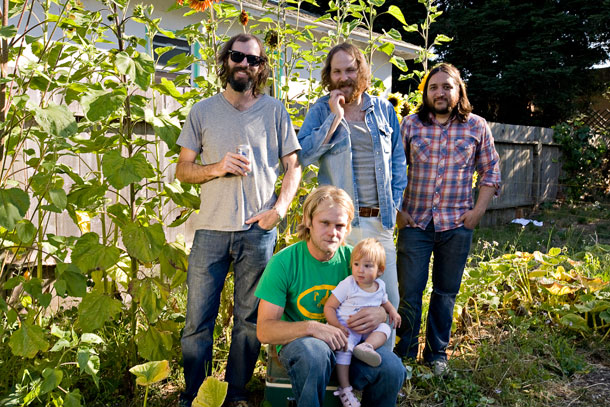 Howlin Rain is 1979. Not in a sad, contrived, state fair revival sort of way, but in a “they-don’t-make-’um-like-they-uses’t” super-sonic rock and roll kind of way. You can’t really go wrong with a blue  Fender Jaguar and a Hammond B-3 organ and a “blind animal energy to endow the music with” when all else fails.

You guys grew up in Humboldt,  but gravitated more toward the punk rock scene than the nouveau-hippy scene there. I don’t really hear that so much in the music with Howlin Rain—maybe there’s more punk in Comets on Fire. Can you talk about the progression and the thought process that brought you guys to  this sound?
Ethan: For the record, when we were in high school, Ian was into all the hippy stuff because he lived in the hippy town next door. I lived in the punk town.

Which is which?
Ian: Arcata is the hippy town.
Ethan: And Eureka is the punk town.  We were both born in Eureka and knew each other since kindergarten. Then he moved to Arcata in junior high. We’d go to punk shows together and we were in our first band together, which was kind of a punk band. But he got dosed with the Dead and reggae and all that stuff when it was still sort of frowned upon in Eureka.

There weren’t any drum circles  in Eureka?
Ethan: Umm, not really. The way we learned to play our guitars was by watching punk bands, not by what the Grateful Dead does. It was, “Look at those guys. They don’t know how to play very well, but they’re making incredible sounds with incredible energy. And they’re just banging away, punching the guitars,  you know?” If you start with that you  can move on to other places, but it never completely leaves you. Your instinct  is that if all else fails, start punching  the guitar.

Do you think it’s easier to go backwards and draw on that punk energy and reverse-engineer the more mature, sophisticated sounds? Or do you just grow with it?
Ian: You grow with it. Growing up, it’s punk that grabs you—it’s straightforward and high energy, it gets you moving. As you get older you listen to more intricate stuff. I don’t think anyone starts off with jazz, except for maybe Joel.
Ethan: You chase down technique as time goes on, but you don’t need anything more than energy to start a punk band. You can’t just start making jazz. I mean, you could, but it takes more than just raw energy to begin making a jazz band sound good. It doesn’t take anything more than raw energy to make a punk band sound good, from the get go.
What would you call good punk,  by the way?
Joel: I’ve come to it newly, like in the past 10 years or so. Iggy Pop or the MC5; there are some really good ’60s garage punk bands.
Ethan: For me and Ian, it would have been the classics like The Misfits and  Dead Kennedys, Minor Threat, Bad Brains, that kind of early stuff, then getting into the Germs and those kinds of things.  Then there were other bands in the East Bay Gilman Street scene like Filth, Bl’ast!, Green Day, Screeching Weasel, Neurosis. Some of them went on to bigger things and some of them didn’t, but when they were on that underground level they  were really good. But anyway, that was  just a little clarification since Joel named the MC5. He’s a little lost for anything  after 1979.
Joel: That’s the thing too, though.  I think that punk is basically just bombast. It is Coltrane. What got me into music was jazz, and that’s the exact same impetus.
Ethan: All good music embodies that explosive power at some point, whether it’s finely-made Christmas music by a choir or it’s punk rock or jazz, or whether it’s done by people who have 30 years of  24/7 technique that they worked on.  In the end, none of that stuff means anything if you can’t reach in and find a sort of blind animal energy to endow the music with. Even though when we started we were just banging away and didn’t know anything more than barre chords and just move your hand up and down the thing, you know to just try and work with that energy. It didn’t mean that it would keep us interested or that it could be of great use forever to just bang away on those four chords.

Well, if you had four, then you had one more than everybody else.
Ethan: Actually, when you’re doing  barre chords and just running your
hand up and down it’s just one chord; you’re just making it move. So, I’m not sure we even had all four in our  first incarnation.
Joel: Maybe three and a half.

Now that you’ve done a major label contract, would you recommend it to people aspiring to that?
Ethan: It’s not a blanket thing. For all the labels I’ve worked with, in Howlin Rain and Comets on Fire, I’ve liked and have had a good, honest, and friendly experience with almost all of them,  if not all of them—from Alternative Tentacles to Sub Pop to Bada Bing to Birdman to Columbia. And those go from labels that are just one guy working out  of his apartment to, you know, Columbia Records in New York and Los Angeles.  I’ve had good luck and have made good relationships and friends out of those.  But for every single one of them, there was always some band on the label who said, “Don’t fucking do it, aw, I hate those guys.” At any label you go to, you’ll find some artist who’s unhappy. Maybe it was the wrong thing for them, maybe they can’t be pleased, or maybe something that seemed bad happened to them. So those are decisions that everybody has to make on their own.