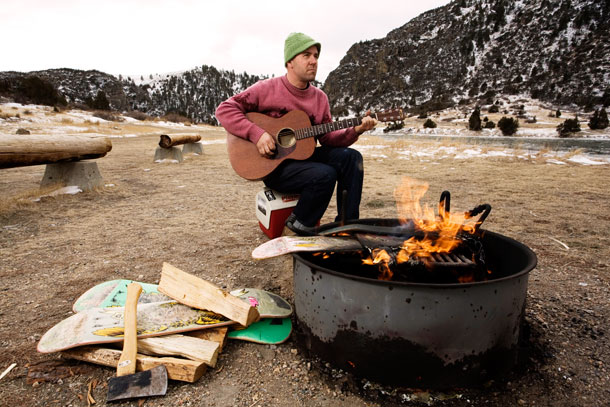 “We are skateboarders, but this is not skaterock.” Such was the hand-scrawled inscription inside one of Grandaddy’s first early-’90s demo tapes, flowed out to the rats by drummer Aaron Burtch, then working at City Skates in Modesto, CA. A band of skaters recording their own music, DIY and lo-fi, kinda punk but not always, playing the demos when Real or Consolidated would come through—that was Grandaddy. The first band us isolated NorCal folks heard that didn’t only exist in a skate vid soundtrack and who weren’t larger than life. Jason Lytle was the band’s voice; he wrote the songs and played most of the instruments on the recordings, and did lots of the art, too. With sweet, synthy rock and all the sunny hooks and harmonies you could ever wish for, they sounded like their landscape.  And as always, when something good is born of California dirt, the world rushes in. So it did upon the band, who spent the next dozen or so years living on the road as critics’ darlings, hailed over and over as the next big thing. By the time Grandaddy came to an end in 2007, the pressure had taken its toll and Lytle was ready to get out of the valley and into the woods. He could have taken an easy route, East a couple hours to the mountains above Sonora. Too close to home, though—civilization siphons its way there, and the forests have a reputation for bad news at the ends of the wrong logging roads. A better career move might’ve been waiting up past Sacramento in Nevada City, a pseudo-backwoods hovel of comfortable artistic fostering. Every freak folk huckster in the world is moving to  Nevada City. It’s like EMB for indie rockers. So, no. Instead, Jason moved to the big timber and deep ’crete of Montana. He shacked up over the winter  in his house and recorded the songs that’d come to make up his first  “sew-low-owl-bum,” Yours Truly, The Commuter, out now on Anti. The bent synth goodness and A+ writing that were the hallmarks of Grandaddy continue in Jason’s new tunes. But he still wants to talk about skateboarding more than anything else.

Canal surfing. Pros and cons.
It cools you off in temperatures above 100-degrees, and when you fall you can find all sorts of treasures like bicycles, shopping carts, and dead cattle. And you get really good at something that’s useless, just like bungee jumping. The cons: You cut your feet to shit on broken glass, and sometimes the dead cattle you find at the bottom are actually humans.

Why’d you move all the way to  Montana when you could have moved somewhere closer to Modesto, like Pinecrest or something?
When you head into most mountains in Montana, you see no trash, no people, no human evidence. I got tired of running into meth labs and rusty dead appliances and dirty diapers in the mountains around Pinecrest.

Modesto to Bozeman has gotta be  a rough drive. Seen anything weird?  Strange lights?
I’ve actually made the drive a number of times. I really like the terrain. My weirdest moments usually involve energy drinks, No-Doz pills, and some freaky books-on-tape I’m listening to. But my favorite moment happened coming into Montana once,  where I saw a hawk kill a Canadian goose in mid-flight, and the feathers rained down on me as I drove by.

That’s a lot of Anti-Hero decks you’re keeping warm with.
Yeah, I’ve been super fortunate to have been getting AH and Spitfire stuff for a number of years now. I also get stuff from my friend’s company in Ohio called Effort skateboards.  I sense an appreciation from these people  with the fact that I’ve accomplished what  I have musically, and I still happen to skate  on a very regular basis.

Where have you been riding in MT?  Do you get to skate Jeff Ament’s bowl?
He gave me his number and the A-OK to call him when I roll into town. I haven’t skated it yet. I ride all the parks here: Butte, Great Falls, Bozeman, Missoula, Anaconda, Whitefish, Polson… To name a few. Bozeman’s actually getting a new one that’s supposed to trump them all. Coincidentally it’s a half-mile from  the place I just moved in to.

Your Roland RS-09 string synthesizer’s been getting lots of screen time on YouTube. Tell us what’s so rad about that little synth.
I have many synths and modules and filters that work good for different occasions.  They’re all like my little buddies; the RS-09 just probably looks cooler than some of the others.

Do you still go to tape first?
I track drums to tape first, then transfer that into Computerland. From that point I get stupid and meticulous with overdubs and vocals.

When you were first starting out, Aaron would tell us stories about you guys recording directly onto VHS tape.
This is true. Our first full-length was actually mixed to VHS. The only master of it is in the VHS format and it sounds really huge and nice. I discovered that you could mix down to a VHS machine and it would sound better than the first DAT machines did.

Folks are looking forward to a few shows. What’s the set-up gonna be?
A simple four-piece. Me, Rusty Miller from SF, Aaron from Grandaddy, and my friend  Rob from Montana who I met through skateboarding here.

What’s a third time that skateboarding’s saved you?
It’ll be on this summer tour. There’ll be skateparks involved and it’ll be a diversion for me, keeping me out of dark bars and out in the sun, feeling good and rolling around.