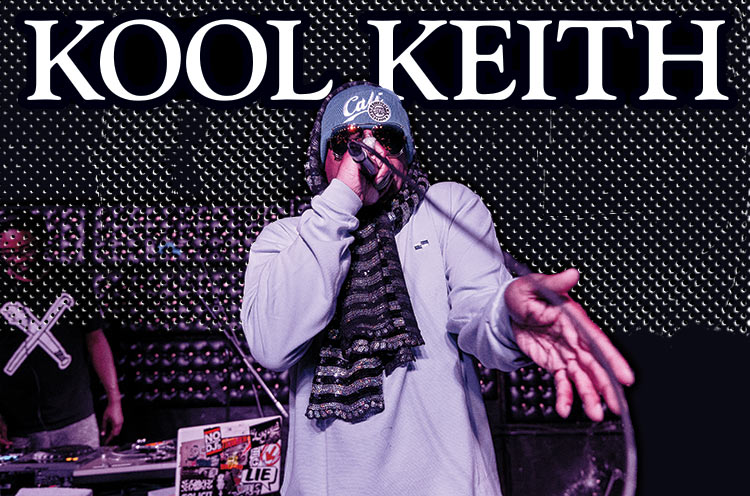 Kool Keith don’t give a shit. He’s the death metal of hip-hop. He’s been doin’ his own thing in the game since day one: flipping off big labels, releasing cult classics on his own, effortlessly ignoring all the clichés in the rap industry and in effect granting him a massively-diverse audience. I’ve been waitin’ to check this dude off my list for a while. Past attempts to see a gig consisted of no-shows and dead-end leads. Fast forward to the present venue at hand and Keith is still mysterious as ever: I saw no visible flyers, no merch table, no sign of the dude anywhere and the clock was ticking. In the moment I decided to look away he appeared on stage like a ghost deciding to reveal itself wearing some bedazzled power scarf on his head. Keith started running down all his aliases from the Ultra Magnetics to the Diesel Truckers to Dr. Dooom to Mr. Gerbik without pause, all business and attack. When it was over we hit him up for an interview outside and he calmly obliged—but not before kicking it with his fans on a street level making sure all were saluted for coming out to the show. It was well worth  the wait. —Sam Hitz

Hey, good show, Keith. What’s the title of the new album in the works? And if you could, please explain the vibe of it.
The new album is called Future Magnetic. It’s, like, I got a lot of features on it, lots of surprise features that you never thought I would collaborate with. I got MF Doom, I got Mac Mall, I got Atmosphere, I got—who else? Got a lot of people coming. Lot of surprises. Craig G. I got many more to come.

Analog Brothers released Pimp to Eat 16 years ago and there’s a re-issue coming out. Any good stories from those recording sessions?
Analog Brothers is out as of now. It’s a very good album. It’s digitally re-mastered for the people who missed it; a lot of people missed it. It’s brand new marketed—over brand new again. It’s out now. Ice-T, everybody’s on it. It’s just another incredible project—of course the beats. Everything is just timeless, as usual. You got to definitely see the video for “Country Girl.” I got a new song coming out called “United First Class” and I just did a video for it.

Any chance of gettin’ that posse back together for a new record? A new round for the future?
I don’t know. It was just a timeless project. One day maybe they’ll all come together. It would be another great second round at bat for another album like that.

Who were you a bigger fan of, Michael Jackson or Prince?
I liked both of them. They both was great artists. They the most elite of the elite artists out and a lot of artists act more arrogant than both of them. Michael Jackson and Prince are to the highest extreme of an artist you can get and everybody else, you know, they can’t ever reach that plateau. Lotta these artists out here is just really being a joke.

They’re just grasping.
Really bein’ a joke. Like you’re sayin’, why would you rate yourself against Prince and Michael Jackson? And James Brown! You can’t do nothing about that.

I’m gonna hit you with some top-threes right here, man. Real quick. For example: top-three rappers that should’ve been in the Rock and Roll Hall of Fame before NWA, in your opinion.
Ah—Kool Keith of course.

Ha! Yeah, I knew that was coming. I set you up.
KRS and—lemme see. One more left. I got one more to pull up. Kool G Rap.

Cher?
No, no. I got one more to give you: Taylor Swift.

Yeah, I would have to agree. Her feet are kinda big, though. Three exotic animals you would consider edible?
I don’t know. I don’t eat animal. But you mean like gorilla? Lets see—rabbit.

Hell yeah. They still run it. That shit’s toxic!
King Vitamin. Ha! Remember that shit? And the original Apple Jacks. Yeah, you know they took the cinnamon off. You know Kellogg’s did a new twist; they watered it down.

Yeah, they cut it. Hey, Keith, thanks for the interview, man. Appreciate it.
What’s up with Tony Hawk? He still skatin’?