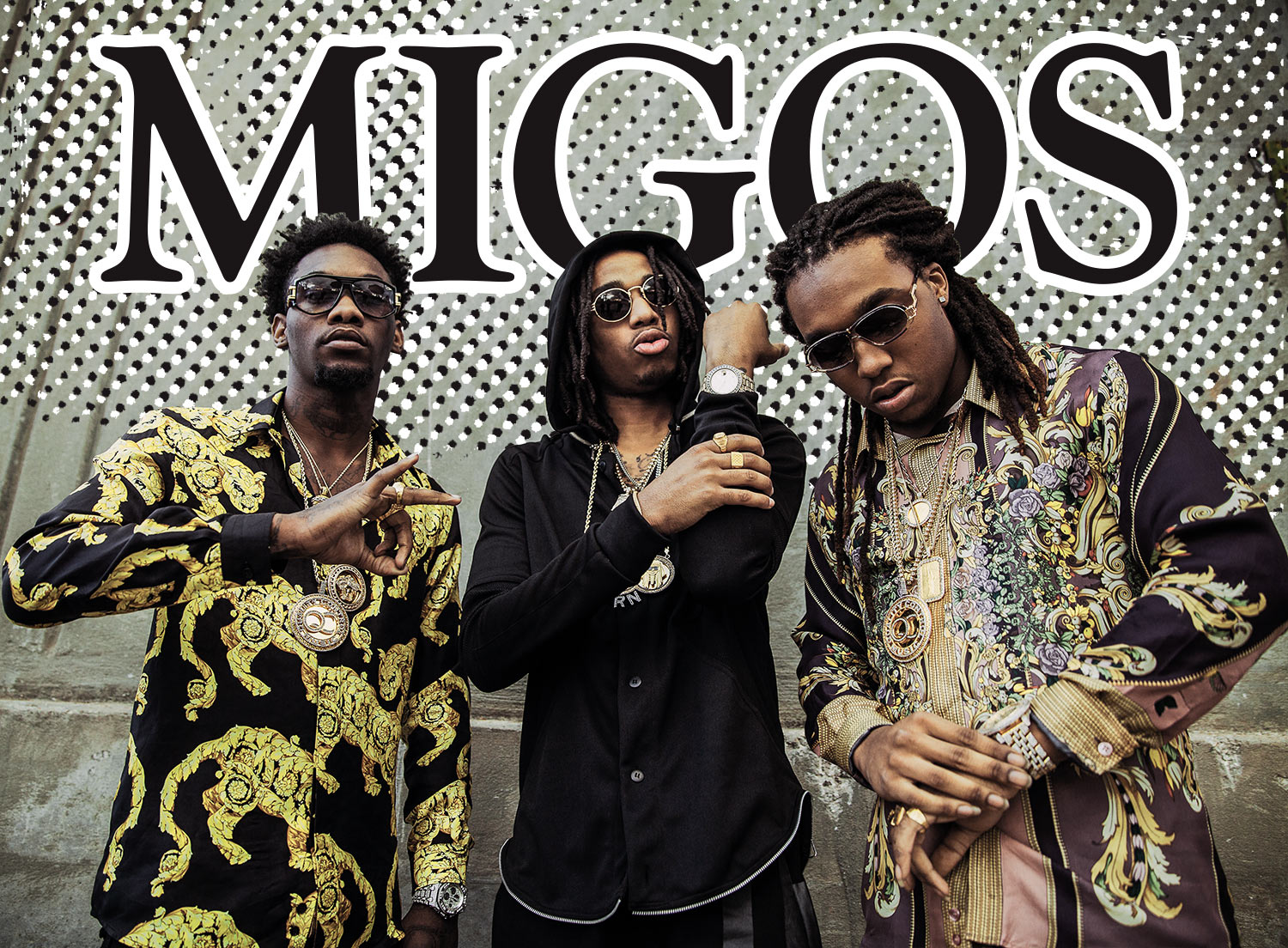 Migos rapper Offset recently called in for a radio interview from his Bulloch County cell block in Statesboro, Georgia, where he’s serving time for drug and weapons charges. He was apparently in a positive state of mind and eager to resume his role in the Atlanta-based rap trio. After all, Migos has been on a meteoric rise to fame since releasing the 2013 single “Versace” with trap music rapper and CEO Gucci Mane. Quavo, Takeoff and Offset followed up with 2014’s “Fight Night” and 2015’s “One Time.” Although Offset’s incarceration is a major setback, the other two fellas are holding it down and heavily promoting their first full length album, Yung Rich Nation. Quavo took some time to talk about Offset’s current situation, being compared to The Beatles and what he really thinks of Hannah Montana. —Kyle Eustice

What’s going on in the Migos world?
We living every day, living blessed, man.

Your first full-length album Yung Rich Nation is finally out. How are you feeling about it?
It feels great to finally have the album out there, man. I just want to say thank you to all the fans that supported the album. Now it’s time for us to go back to the basics and drop some mixtapes to give y’all free music. But if you want to support Migos, go get the new album.

You guys are very, very young. I was surprised to see one of you is only 20 years old. Did you expect to have this level of success at such a young age?
I just wish I was richer early in my life.

Did this path seem likely as a young kid coming out of Atlanta?
You always go for greatness. I’m just grateful to have this position because a lot of people try to make it and we just so happen to be the chosen ones. Once again, we just work and grind ’til we can’t go no more. Hard work does pay off, so I can’t tell anyone to stop following their dreams because our dreams did come true.

I respect your hustle for sure. Most kids can’t relate to having mansions and designer clothing, etc. Why do you think “Versace” reached over 13 million views on YouTube?
It reached so many people because we were these young kids who couldn’t wear or afford Versace, you know what I mean? When we came out doing “Versace,” we were actually fantasizing about wearing it. We didn’t even have the clothes until we got to the video shoot and they brought in all the props. Then they tried to take ‘em away from us after the video shoot. We was, like, “Oh, shit, where are our clothes going?” We ended up buying them, but yeah, we were just dreaming about being in them. It does come along with that rich mentality.

Talk about manifest destiny. Now you can buy Versace. What did you think of the that article that listed ten reasons you’re bigger than The Beatles?
I think it was cool, showing people what we’re doing and we’re big and we’re working hard.

That’s pretty crazy, though, to be compared to the biggest band in the world. Do you think it’s true?
I mean, you can’t take it away from The Beatles, man. I hope we can accomplish what they accomplished. We still have a lot of work to do, but we up there.

What got you into rap music initially?
We listened to a lot of Cash Money stuff, Outkast and other Atlanta groups.

Any news on Offset and when he’s being released from prison?
Offset’s coming home real soon. He’s good. He has a good spirit. We’ll see him soon, man.

Do you miss him?
That’s my boy. I miss him. I talk to him every day, but I know he’s coming home soon. We’re holding him down.

He’s lucky to have friends like you.
Most people won’t do that. We’re just real family. Nothing will come between us.

When you were interviewed by Nardwuar at SXSW, what was going through your mind? You sure looked a little uncomfortable and I don’t blame you.
He really did his research and studied us, but we were, like, “Whoa.” It was not a regular interview. He asked some strange questions.  It was stuff you have to dig up and find. I’m, like, “Uh, how did you get this information?” I forgot some of this stuff so how did he know?

Maybe he’s CIA or tracked down your mom or something. It was kind of weird when he pulled out hard copies of childhood photos.
That’s what I’m saying, like, did he go through my grandmama’s family picture album?

Where does Migos go from here?
We’re still working. We’ll never stop. We’re just beginning. We’ll just keep working and putting out music. You only get a specific amount of time in this game, so we have to keep it moving.

What do you think of Hannah Montana?
Oh, Miley Cyrus?

Come on, dig deep. Do you think it’s appropriate for her to act the way she does when she has so many young girls looking up to her?
She came out with Disney. She was a kid. She can’t be a kid all her life. I mean, she’s growing up and getting into different things.

I understand that, but when you have such a huge platform, a whole lot of people are watching. Same with Migos. What kind of messages do you think she’s sending?
I think she should watch what she do because she does have a big following. She has kids looking up to her. Whatever she do, they gonna gravitate towards her and will want to copy her because she’s their role model. You don’t want kids saying they got it from you.

Is that level of success attractive to you? Let’s say you’re getting followed everywhere and people are constantly taking your picture, getting into your business. Is that something you want?
It makes you feel good about yourself. People are going crazy for you. It’s crazy. You want that, but you won’t have people following you around all the time. Maybe if you go out to the mall or something you will, but when you’re at home, that’s your personal life and you’re straight.

Would you say your dreams are coming true?
Dreams are definitely coming true, but we’re just going to keep working.