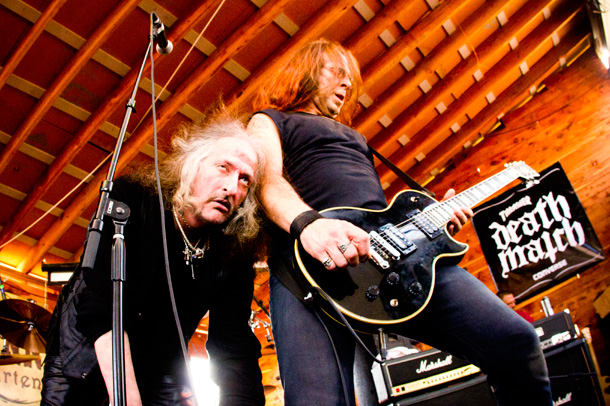 "After Johnny Thunders died, I was the poster boy for narcotics for 20 years."

Bobby Liebling and Victor Griffin of Pentagram graced us with a few minutes to talk about the band. They’ve flipped their lives from drug abuse to sobriety and God—but though they’ve changed a lot, they’re still Pentagram and they still rule.

How’s all the black leather treating you in this Austin heat?
Bobby: Drippy! Dye coming out all over my arms, looks like I haven’t showered in six weeks—what you expect when you’re wearing all leather in 95 degrees.

Who were the bands you played with when you guys first started?
Bobby: We didn’t really play with anybody, before we started playing with Death Row. You can’t play in the Washington, DC area if you don’t play covers. There’s never been a more dead music scene than in DC.
Victor: People weren’t very serious about anything other than learning Judas Priest songs. You’ve got to pursue your dream, and you’re not going to do that by playing other people’s music.

You seem to have good chemistry  on stage.
Bobby: He gives me a yin-yang. He’s like flesh and blood to me. When I’m playing with him I’ve got the confidence to be goofy or mean or whatever I want to be. He’s an incredible guitar player; he’s an innovator for sure. I have the utmost respect for him. I wouldn’t want to play with anybody else, to be quite honest.
Victor: It’s true! I feel the same way about Bobby. We’ve had our rocky roads, but we’ve never fallen out with each other.

So you guys are clean and sober?
Victor: We tried all that stuff for a long time in the ’80s and half of the ’90s—as well the cult symbols that go along with it—and none of it ever got us anywhere. Now we’ve both cleaned our lives up and have gotten away from the dark images, upside down crosses and pentagrams, all the satanic symbols and negative crap. Now look what’s happening. Very few bands in history start to escalate their career after this many years. It’s just unheard of. Someone’s got a bigger plan.
Bobby: I found sobriety a few years after Victor did, and he saw that I was serious about my commitment. My spirituality, my direction, no more of that downstairs dwelling.
Victor: We talked on the phone one day, and  I said, “Look, I’m not trying to lay down a rule book or anything. You just got to maintain your scurrility and drop all the satanic symbolism.” And it worked.

What does rock bottom mean to you? How far did you go?
Victor: I hit rock bottom around ’97. It’s getting to a place where you can no longer do it for yourself. You’re down so low that you finally reach a place where you can start to crawl your way back up.
Bobby: All the drugs got me sick, disjointed, my body was ripped to shreds, and my faith in rock’n’roll had died. After Johnny Thunders died, I was the poster boy for narcotics for 20 years. I’m in my late 50s. When I met my wife my life changed very, very drastically. She’s definitely my soul mate. She said, “I see through the scars, the abscesses, the holes,  the tracks, and I see a softness under there.” She stuck with me and we’ve been together four years now. She gave me a baby, he’s  six-months-old, and I’m loving life.