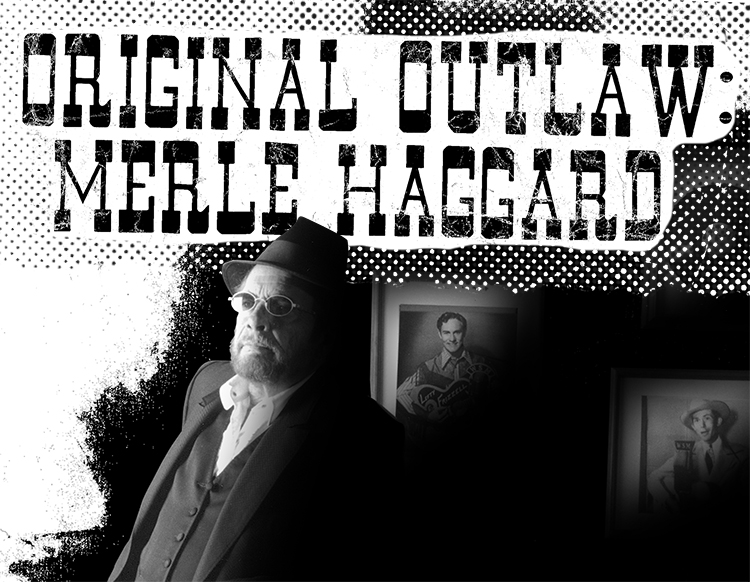 Sad news that Merle Haggard died today but what a life he lived. He ran it full tilt for 79 years. Drinkin', fightin', and lovin', nobody said it better. Hats off to Hag. Check out this interview from Thrasher's March 2002 issue.

Merle Haggard will admit that his life parallels some of the greater stories in history. He’s probably the only one in the US who can brag about being sent to San Quentin and made Man of the Year by the same county seat within a decade. He’s released nearly a half-dozen records in the past year including Roots, Volume 1, a tribute to his idol Lefty Frizell on the Anti/Epitaph label. At 64 years old, he says “I’m older than most of the people who listen to my music, and many of them are retired. That pisses me off!” Hag is still performing with the intensity of a freight train. I recently had the honor and opportunity to get his thoughts on life, growing up, and the recording business. –Eben Sterling

Thrasher readers are mostly teenagers who have a reputation for being rowdy. What was it like being a teenager in rural California in the ’50s?
It was an exciting time to be alive. It was in some ways similar to the way it’s been since September 11th; we were at war. I did my best to get into the Marines when I was 14. I didn’t make it, but I’ve grown up a young warrior in the bar rooms and the oil fields of Southern California. It was one of the most wonderful periods in history to be alive. A lot of things were being discovered—the Internet hadn’t come along yet, television was in its infancy; a lot of transitions were being made. It was a period that I’m representing or recalling on my new album. It was sort of a transition period from the big bands of the ’40s to the rock and roll of 1955. It was just prior to heavy electronic manipulation in music, such as echo and reverb, gates and compressors—all that sort of thing found in modern day recording.

Before you got into music, you got into a lot of trouble as a teenager.
Most of it was for truancy-related situations. If you didn’t go to school they’d put you in juvenile hall, or some sort of a school for boys. It was just a little prison. I got in trouble right off the bat when I started high school. I’d just lost my father, my mother had to work days so she couldn’t supervise me, and so I was in the streets. I wound up jumping freight trains, going to Texas and not going to school, working in the oil fields, bucking hay, and doing all kinds of stuff. I enjoyed being an adult, and they didn’t want me to be an adult. I got in there, did some time with some pretty tough guys, and picked up some pretty bad habits. I messed around with it for about seven years, before I finally matured. Some people grow up in the army, I grew up in the joint—and I realized when I was about 19-years-old that I didn’t want to do that for a profession. So I came out with a different attitude and leaned towards music—music being the only hope I had for pulling out of the rut of poverty.

How did you meet death row inmate Caryl Chessman? In your bio he is noted as being instrumental in your changing attitude.
It was a situation that occurred accidentally in San Quentin where I was detained in what they call the shelf, which is the jail within the prison. I got busted for making beer and did seven days on the shelf, and while I was there I had a couple of conversations with Caryl Chessman.

What was it about the conversations with him that acted as a catalyst of change for you?
It was awful close to the fire. I was just across the alleyway from him. He was in jail for armed robbery, 26 counts of armed robbery. They hung this red light bandit thing on him—nobody believed he was guilty, but he became a political prisoner. Somebody had to execute him or get fried themselves. The guy didn’t kill anybody but they were going to kill him anyway. That’s what can happen if you get the reputation that he had.

Is the song “Sing Me Back Home” a reference to his situation?
It’s like a guy going to war and writing a song about getting killed. There was more than one execution in there and I had the chance to know at least one other prisoner that went to death. It was Jimmy Hendricks, the same as the rock star. They executed him and he was a friend of mine. It was about the surroundings that I grew up in, the reality of that.

Then you were able to hook up with the prison band...
After the first couple of years I got off of close custody and on to what they call the Warden’s Show. The Warden’s Show was a show that happened every Wednesday night where you entertain functions from Frisco—the fire department one night, then maybe the police department the next night, then somebody else. It was just the craziest thing I’ve ever done; waited all week long, we were part of a variety show. We’d run out there, we did one song, “Just because you think you’re so funny, just because you think you’re so hot, just because you think you’ve got money…” Well, we did that thing and we got scared every time. We never had time on stage to get unscared. We’d run out there. We’d be a nervous bit of energy and we’d always get it wrong. So the prison band deal didn’t really help much. All
it did was let me know what stage fright was about.

The Bakersfield sound is as indigenous to California as skateboarding. Why did this brand of country develop here as opposed to Texas or Nashville?
California and Texas really are pretty close, with the exception of their footwear and their hats. There’s a Mexi-Cali thing that goes on here, and a Tex-Mex thing that goes on down there. East of the Mississippi, country music has its root in gospel and the coal miners. West of the Mississippi is a little more electronic, maybe ’cause it came up through the ranks of war time and the oil industry. It was born and spawned in the bar rooms around the Air Force bases, ship yards, and oil fields. It came from the dancehalls, and it didn’t really have much likeness to church music, whereas bluegrass on the other hand was born in the black churches, born out of a different mentality than country music out here.

What did Lefty Frizell, who wrote the majority of the songs on Roots, contribute to this new sound?
Lefty Frizell was doing “If You’ve Got the Money I’ve Got the Time,” which is probably the epitome of the greatest bar room song. This was the beginning of a different kind of bar room music. Hank Williams was on the same show, and Hank was the older artist with more records out and more time in the business. But when they toured together Hank Williams opened the show for Lefty, because Lefty had a better—maybe what we’ll call a wilder sound. Hank walked out with just a guitar, a fiddle player, and a guitar player. Lefty walked out with a six-piece band that had arrangements. Hank didn’t have a chance. He couldn’t have followed Lefty ’cause Lefty was like Elvis. It didn’t work. Lefty was the hot boy, the new boy in town that was making the girls scream. He had curly hair and he didn’t wear a hat, and he wasn’t bald. He was only 21-years-old, sitting with four songs in the top 10.

And you were able to hook up Lefty’s original guitar player, Norm Stephens, for the record?
He was from that period and recorded on those very first records that turned my entire life around. I learned all the licks on Lefty’s records, then found out that the guy who made those records with him was living 12 miles from me. It just all came together, and in a matter of hours we decided to work on this project. We wanted to record it in that same manner so as to capture the reality, and also allow ourselves to become younger. We were doing a tribute to a bunch of guys who at the time were in their 20s.

So what initially attracted you and inspired you to make a record of music from that era?
We were just recovering from the Depression and World War II, and people had come out here to work in the ship yards and escape the dust bowl. It developed out of an attempt to have fun, back when fun was still allowed. There is no fun no more. They have outlawed all fun, and fun is the second best thing to have.

What’s the first?
It’s either sex or something else. I’m not sure.

Before we wrap up can you tell me a bit about your relationship with Anti/Epitaph records?
You know, Epitaph came to me. The owner and a couple of the executives came up and listened to what I was recording. They said they were interested in paying me a lot of money. The said they didn’t want me to re-record anything. They didn’t want “to change one hair on my head” was their phrase. I’m contemplating buying an ad out of my own money in Billboard, saying that Merle Haggard has a story more amazing than anything he has ever lived: He has found a record company that actually pays the artist! When you deal with the people I’ve dealt with, and then run in to someone who’s honest, it’s really unbelievable.