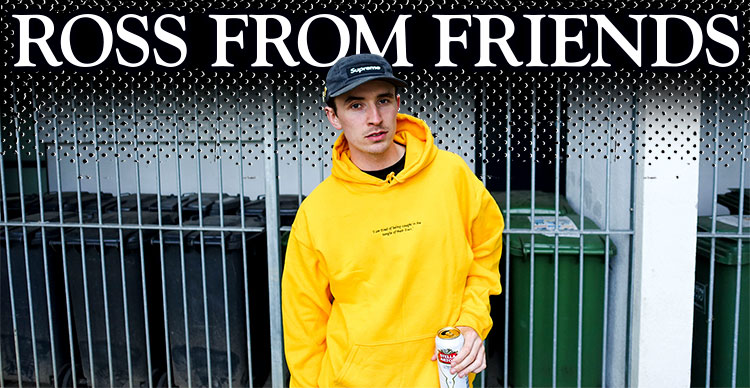 Ross From Friends is to release The Outsiders EP, his third and most expansive release to date on Magicwire. Drawing on from influences from hip-hop sampling to new wave the final result is the same stripped-down approach to sound design we’ve come to know Ross for: quaint melodies, dated acoustics and a simpler-time sensibility make a tongue-in-cheek statement not unlike the artist’s stage name itself. –Magicwire

Can you tell us a little about yourself and what you do?
I'm Ross From Friends and I'm a music producer from London, UK.

Two of your passions are skateboarding and dance music, something not so connected in the larger scenes of either, but in the DIY scenes we are seeing more crossover these days than ever. What do you think is a catalyst for that? What similarities do you see in the scenes?
Skating and art are pretty tightly linked. It seems like everyone I know that skates is into some kinda creative output, whether it be music, illustration, video production and so on. Aesthetically, the kind of dance music I'm into is DIY. It has certain artifacts that are a reference to old music styles. Similarly this aesthetic is gaining popularity in skate video production, with Palace, Bronze and others all spearheading a DIY aesthetic. And even for the style of skating: no complies, slappy tricks and that have been making a resurgence. These are all a reference to old skating styles.

There's lots of overlap. Neil Blender is someone who I constantly refer back to as crossing creative mediums. How does one inspire the other for you?
I think the social aspect of skating really inspires me. If you're at a spot and everyone's chatting, having beers and there's music playing, everyone's always sharing tracks. The same goes for the inclusion of music in skate videos. It's like one of the most important things for me. Usually if I like the music, I'll like the part.

What affect has skateboarding—its aesthetic within certain scenes—had on you and Ross From Friends?
Skateboarding has introduced me to a culture that appeals to me with some really great people, and those people have inspired me tons and tons. Directly, though, the music and DIY attitude of a lot of the smaller skate companies and teams has actually had a direct impact on my approach to creating. A lot of skating is just about goofing around, having fun and that's a large part of what I do with the music I make.

True. A lot of people, especially in London, take themselves too seriously. Who or what are your key influences? Gonz, Getz?
Man, the Gonz, of course. I love all those skaters doing weird shit and pushing boundaries: Richie Jackson, Jamal Smith—killer beatmaker as Poptartpete. It's cool Palace does stuff with him now. It feels super nostalgic, as I'm sure everyone my age remembers his tornado spin tutorial. I also—whenever I'm having a bad time trying to land a trick—pretend in my head that I'm skating like Dylan Rieder. He was a legend, man.

You’ve had a busy year and you're on the road pretty consistently right now. What’s your favorite food on the road?
Yeah, it's so busy at the moment. For food—well, I'm vegetarian so it's really anything I can get my hands on. We had this huge veggie platter when I brought the live show to Thessaloniki, Greece, earlier this year, and we all agreed that it was the best food any of us had eaten. On the other hand, you sometimes just get served every vegetarian side that they have on the menu: a plate of beans, potatoes, rice and pasta or something.

When you perform there are three of you up on stage for the Ross From Friends live show. At a London rave it's a curveball to the punters when you guys roll up with Saxophone on hand at 2am. How was it developing the live experience and why did you decide to go live over concentrating on the usual circuit DJ route?
I think it might be the most fun anyone's ever had. I initially found it really hard to find my voice with DJing, so I thought it might be fun to develop a live show—one that can be visually compelling. We toyed with a lot of different setups initially until we found something that seemed to work. Now I'm really happy with it.

In your latest release, The Outsiders, you showcase various genres undertaken in your own style: '80s electro, new wave and techno. Where do these inspirations come from? What’s a genre you want to spend more time developing?
A lot of this inspiration honestly comes from a lot of the music my dad used to, and still does, play. Now when we hang out we're always sharing tracks of any nature: soul, high-NRG, electro—the '80s and 2000's kind. It's also from just always keeping my ear to the ground. Trying to dig out samples I come across all kinds of music that is really inspiring. Something I wanna look at more is hip-hop and more conventional pop songs. I've always been making this kind of stuff but I'm still figuring our what I wanna do with it all.

Ever thought on going for the Muska, pro skater and hip-hop producer?
Ha! That'd be a dream. I seem to be so busy that skating has taken a bit of a sideline at the moment, which is a shame. But I'm sure I'll get back into it when things slow down a bit.

If you could soundtrack any video part, whose would it be?
I think it'd be cool to soundtrack some total legend that I've followed since a kid: P-Rod or Mike Vallely or something, just to say that I've done it.

What has the rest of 2017 got lined up for Ross From Friends?
I'm actually working super, super hard on an album currently, touring my ears out and just having fun doing it. Hopefully that carries on 'til the end of the year!