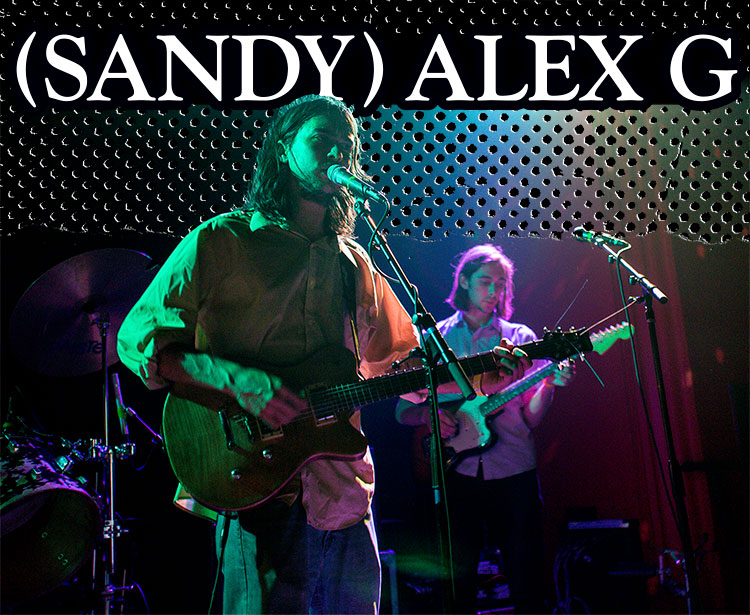 Alex Giannascoli, aka (Sandy) Alex G, burst onto the scene a few years ago with a series of catchy, lo-fi releases on his Bandcamp page. Now, in 2017, he’s built up tons of momentum with a couple of legit label releases, including his new critically-acclaimed album Rocket. At this point, we have no idea where he’s heading and honestly we’re cool with that. He’s given us a big array of work, from lo-fi indie rock, to folk, to borderline noise rock. We caught up with him in a brutally hot stairwell at The Chapel before he played a sold-out, high energy show; no small feat for someone whose music is often compared to Elliott Smith. —Eben Benson

Skateboarding normally gets grouped in with rock ‘n’ roll/punk. Did you grow up skating? I know Philly had a prolific scene when you would have been growing up.
No, I tried when I was younger but I kinda sucked. I would hang out at the skatepark with a skateboard and try to look cool but I just sucked.

Did the scene you came up in have a lot of skaters?
Yeah, there were a decent amount. A lot of my friends skated but they weren’t really good at it either. We all kind of gave it up when we got older.

Yeah, you see that a lot in music scenes where the skaters and musicians hang out and grow up together.
It was totally like that when I was younger and then as I got older, less people really skated.

What was the music scene that you grew up with like?
It was a lot of punk bands. I was lucky because there was a group of kids in my school who were starting bands and playing shows and stuff. I started hanging out with them and playing punk music. My friend Sam, who plays guitar in my band now, used to play drums and I’d play guitar, and we’d make these short, almost poppy, weird, loud songs. We played punk because we really weren’t that good at our instruments.

Did you grow up on the Main Line in Philly? I know that’s near the direction of where Havertown is, although I don’t know exactly where Havertown is.
Yeah, it’s nearby there. It’s in Delmar county which those towns are in too.

Was the music scene kind of a response to that wealthy, suburban vibe in the area?
No, the Main Line was a different type of area then where I’m from. We were pretty separated and did our own thing.

So no Aston Martin dealerships at the end of your block?
Yeah, definitely not.

In a previous interview you mentioned that you were reading East of Eden and Of Mice and Men around the time you started working on this album, and that they influenced the folky, Americana type sound.
Yeah, actually I was reading those around that time. I don’t wanna pit it down too much to that. It makes me sound so dumb being, like, “I read these American authors and now I make country music.” That’s kind of what happened, though. I really liked those books and it coincided with the direction my music was going in. Bottom line, 90 percent of the process is that I want to make music that sounds good and is reflecting me, and then, like, maybe ten percent is me trying to reflect a little bit of a greater type thing, like, with the Americana, but that’s so minimal that I can’t make a claim saying, “this is my Americana album,” because really it’s just me trying to make good songs about what’s right in front of my face and not some larger thing.

Yeah, that makes perfect sense. What are you reading right now?
I haven’t been able to read since we started touring, which has only been a couple weeks, but I was reading this collection of short stories by Silvina Ocampo who was an Argentinean author. It’s good, though. Her stories are kinda creepy. They’re kind of loosely put together. She used to be a painter, so she was always focused on the images and the color rather than the plot being well constructed.

It seems like Philly is changing a bunch—I know a lot of cities are. Have you seen this have an affect on the music scene there?
I’ve been so out of the loop since touring a lot, but I’m sure it’s changing. We started touring a lot a couple of years ago, and ever since then we only play, like, one Philly house show a year.

Did you see it start changing at all before you started touring?
Yeah, it was always changing. I don’t think it was because of just gentrification or something like that—there’s always generations of bands. The bands when I was a kid, and then when they were kids there were bands they would go see. There were young kids that would come see us when I was 18 or 19, so it’s always changing like that. I’m sure there’s another fleet of bands coming up now.

For sure. Philly is mostly house shows, right?
Yeah, and I think it’s still like that. I know someone asked my bandmate Tom recently about setting up a house show and we kind of realized that we didn’t know of any houses to play at right now. I’m sure they’re still around but we’re just out of the loop.

That’s how it is out here too. We have houses that put on shows for a few years and then something happens and a lease is up or something and all of the sudden it’s gone.
Yeah, exactly.

What’s been your favorite stop on the tour?
They’re all pretty good; I can’t pick one out; it’s all melting together. We were just in Santa Ana.

What do you think of music festivals?
They’re cool. I like playing shows in general, but festivals are cool because they have catering—and I love catering.

What was the last album you listened to all the way through?
This album by Earth, an old one, called The Bees Made Honey in the Lion’s Skull.

How much of your music do you attribute to the area that you grew up in and how much came off the Internet?
Most of it is from the bands I saw growing up. The way I play guitar is really influenced by this band I used to see a lot called Rasputin’s Secret Police. When I was a kid, the guy from that band went off and started a new band called Brandon Can’t Dance. I was watching those bands since I was 13 and thought they were the shit. I kind of imitated what he did and the way he plays, the chord progressions and whatnot. Obviously I’m not trying to rip anyone off, but the intervals I choose are reminiscent of his. There was another band called Snoozer, and Tom, our drummer played in their band too and I’d go watch them all the time too. Stuff like that; that was the first music I got psyched about.

That’s sick. I was from a small town and didn’t see a ton of live music growing up, so I always wonder how different people got into making music when they were kids.
Yeah, I’m really lucky to have had all that when I was a teenager, cheap house shows and shit like that. I thought that was normal for everyone and then I got older and met people who had to really push to move out to somewhere like Philly because they were into music and shows. It was so foreign to me that they wouldn’t have that in their town growing up. I didn’t realize how unique it was.