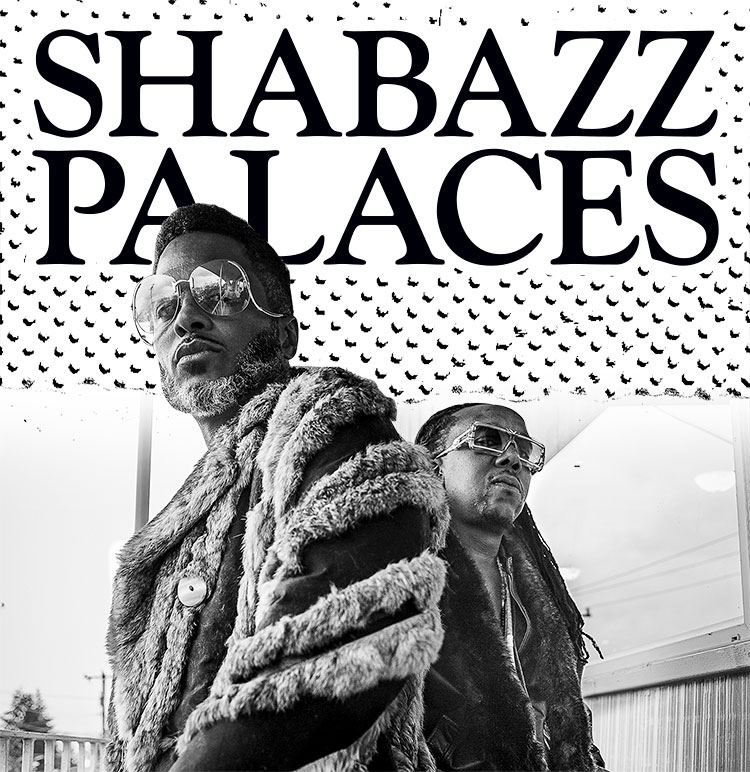 Before the world knew of their true identities, the duo behind Shabazz Palaces was striving to earn its place just like any other aspiring musicians. Once it was revealed the men behind the experimental project were Ishmael Butler or “Butterfly” from Digable Planets, and accomplished Zimbabwean musician and son of son of mbira master Dumisani Maraire, Tendai “Baba” Maraire, Shabazz Palaces took on a whole new meaning, but for a moment, their fanbase was growing based on their musical merit alone. Signed to Seattle’s Sub Pop Records, Shabazz has put out two official studio albums, 2011’s Black Up and 2014’s Lese Majesty. On the heels of the release of its third and fourth albums—Quazarz: Born on a Gangster Star and Quazarz vs. the Jealous Machines—Ishmael and Baba opened up about their initial meeting, why they wanted to remain anonymous and how corny rappers are dumbing down the culture. —Kyle Eustice

When Shabazz Palaces was born around 2009, you guys were undercover at first, as far as I understand. Why did you want to be anonymous?
Baba: I mean, it’s the statement we’re still making. It’s just that people know who we are now, obviously. The masks are unveiled. The point was to walk into the process naked and build our own style of dressing, and that was it. If we would have walked in saying who we were, the expectations would have either been Digable Planets or some kind of African music, you see what I’m saying? It wouldn’t have been just judged for the music solely alone; it would have been linked to that.

Baba was telling me you wanted to initially remain anonymous when you first stepped out as a group. What made you want to be low key about your positions as musicians already?
Ishmael: At that time, I started to see how corny niggas was getting famous for doing stuff that ordinarily you would have had to be unquestionably cool to get rich and famous doing, so it was like rap was becoming this thing, “Oh, check out this guy. He’s associating with these people, therefore you should like ’em.” I was, like, “Yo, that’s corny,” and I felt it was dumbing down the culture. The decision to keep the group anonymous was, like, for my second time coming around, if I was going to get any notoriety, I didn’t want it to be, “Oh, this is the guy from Digable Planets. He’s trying to do this,” so I left everything off of it and let the music take me wherever it was going to take me—take it where it was going to take us—rather than me trying to direct it, so when we got there, it was just where we were supposed to be rather than people having something to say about how we had got there. It wasn’t based on nothing in the past; it was just based on itself.

Did that seem like a brave decision? I feel like some people would depend on that. Was it a no-brainer or was it more deliberate?
I: It was both. It was a statement to myself, too, ’cause if I really believed that this stuff was bullshit and superficial then I couldn’t participate in it for my own benefit. I had to stick to my beliefs and so something that reflected that. It was a no-brainer and I understood what the consequences might be, but so what, though? The alternative wasn’t acceptable.

How did you initially meet?
B: I was on my way to a reggae club and I ran into him. I asked him if he wanted to do some music and he was, like, “I don’t do music.” And then our girls at the time were friends, but I didn’t know it. His girl was, like, “Oh no, you gotta meet. If you do, it will be dope. It could be a life-changing experience for people.” We hooked up after that.

When you first met, you said, “Nah, I don’t really do music right now.” Were you in a place where you didn’t really want to do it at that moment?
I: Yeah. I just thought it was over for me. I had my day and it was just over. I was still making music, but I wasn’t trying to get a record deal or nothing like that. I just really thought that was over for me.

Was that a sobering thought?
I: Definitely, definitely—you’re in it, so you got day-to-day stuff you gotta take care of, responsibilities and stuff, so you gotta keep pushing on, but it’s, like, underneath all of your thoughts—that notion and that reality. You  know that belief is the main thing that can get you to a goal, so you can’t really accept it  all the way. You have to try to find something inside of you to get you to the next goal,  but at the same time, reality makes you think maybe I just gotta accept it so I don’t waste my time as well. It’s like you’re walking a  tightrope emotionally in terms of how you plan things out, so it’s a crazy place to be, but everybody goes through it in one way or another in life. It’s a part of growing up and maturing and the way that life comes because it comes  in waves.

What about you and Baba’s styles and personalities gelled?
I: That’s my bro. He’s been with me the whole time. Without him, I probably never would have thought of doing it. He was such a talented musician that we kinda combined at that point naturally. It wasn’t, like, “Oh, you want to make this group?” or nothing. It was circumstances put us in that position.

What’s the difference between playing with Digable Planets and Shabazz Palaces?
B: I just love being on stage. In the  Shabazz shows, there’s more improvising. We have more time and more raps together. We’ve been doing it seven, eight years now. You start to know what the person is going to do on stage.  The continuity is there. With Digable, it’s getting there more and more.  At every show, you can feel it.