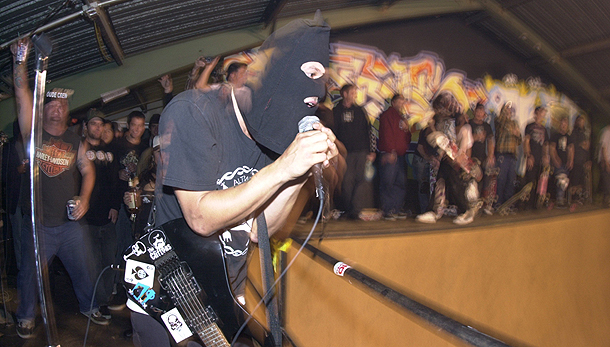 I've known Sam Hitz for a while now. He's always been the guy to turn to when you need an honest opinion about something. He’s a straight shooter; he'll tell you how he sees it, and he's been in the game long enough that you know better than to second guess him. When we started discussing another Skate Rock album, Shed was one of the first bands thought of to be included. Along with Hitz, Darren Navarrette, Aaron Scott, and Chad Mohler, the group’s been rocking together since 1999, while their skating speaks for itself. I caught up with Sam to shed a little light on their current state.

How long has Shed been a band?
I guess we’ve been banging on shit since ’99.

What's the current status of the band?
Good question. Pretty much in and out of hiatus. We suck.

Who are some of your major influences?
We've stated the obvious bands before, but just watching our fucked up friends skate and geek it. Like G-Man and old man Andy; they usually create some grim punk rock situations.

There's a new Skate Rock project in the making. What part in that will you guys have?
Well, we recorded a shitty song called “SDFFU” exclusivley for Skate Rock 13. There’s a DVD side, too, so there should be some skating and footage from a couple shows.

Talk about the process you guys use to create new material; is it out of jamming or does someone write shit down and show it to the other guys?
It's completely retarded. It's like making a five-year-old do geometry. That’s completely it! Ignorance is bliss. We don't want to be infiltrated by rules that say “this is how you are supposed play your guitar” or whatever. 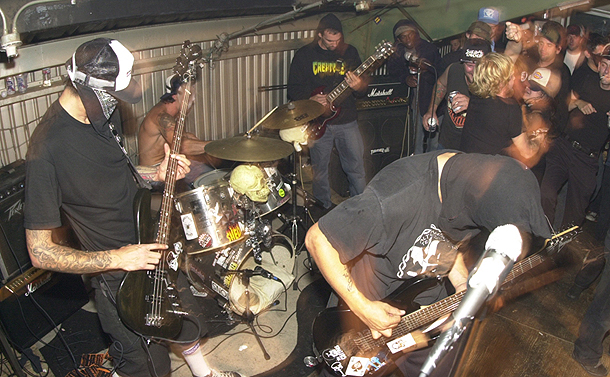 What kind of side projects are you working on?
Projects galore. I'm on a video kick right now. Prepare for Collections of the LARB.

What’s one of the best shows or memories for Shed as a band?
Police helicopter 50 feet above my head, kicked out windows, little children beating senior citizens, and a rollerblade dummy filled with cat poo chucked into the crowd, all with in an hour’s time.

What would be a dream show or tour for you to play?
How about Shed, Johnny and the Dudes, and Highway Murderers for five nights in TJ.

What would you like to say to all the rollerbladers of the world?
Cut your feet off.

Which band member would win in a game of skate history?
I'll have to go ahead and give that one to Darren. But our drummer Aaron is a third generation Z-Boy so I don't know. 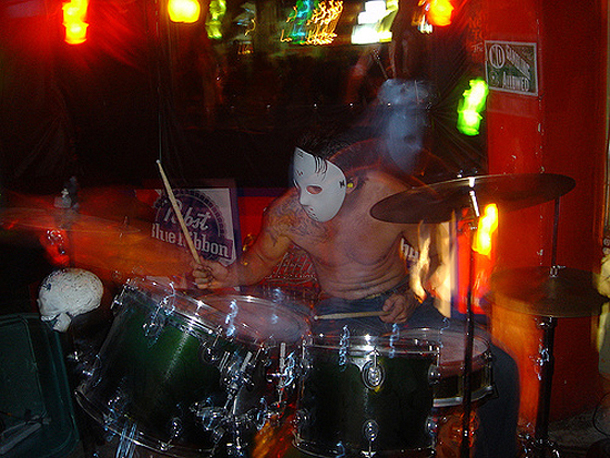 What's the best excuse you've heard not to get together and jam?
“It's Hamburger Helper night.”

Do you prefer to play loaded or wait to get loaded ’til after you play?
It escalates from start to finish. We never censor our vices.

What does the future hold for Shed?
Hopefully none. Skate Rock 13 is a good number to die on. You could never beat Skate Rock 3 with COC, the Accused, and Gang Green. But from what I heard so far this is going to be the best one since. No outsiders. Down for life: pure skate rock.