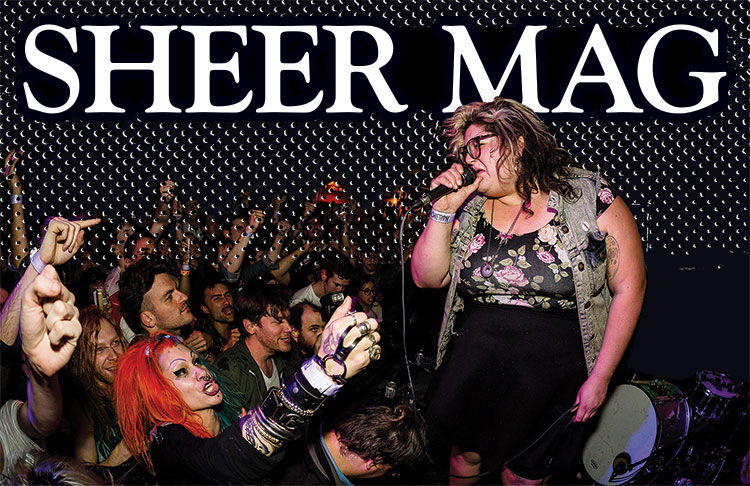 Every now and then a band comes along that when you listen to them everything clicks. Sheer Mag found the perfect balance between punk and hard rock. Their new LP Need To Feel Your Love is full of riffs and hooks, “Come on down and get in the mix, We get our kicks with bottles and bricks.” I’m in! Tina Halladay, Kyle Seely, and Matt Palmer took some time to talk about song writing, playing shitty music festivals and more. Interview & photo by Jordan Joseffer

Between your name and band logo, have you ever been confused for a thrash band?
Kyle: Yeah, sort of. A lot of the times when we get to the shows, the sound guys or someone will be, like, “Whoa, I had no idea what to expect.  I didn’t listen to you guys at all. I thought you guys were going to be a metal band.” It happens from time to time. I sort of made the logo— I mean, it’s obviously an homage to that style. I’m cool with it.

You can hear a lot of the influence in your music from punk to straight up hard rock. How would you describe this fusion?
K: Yeah, well it’s definitely a fusion. I used to be in more sort of post hardcore bands and stuff like that years ago and I always listened to a lot of classic rock radio. For me, I wanted to make more of a hard rock band but punk in the sense that we rooted ourselves in the DIY scene.
Matt: I guess our background is more punk so there’s that influence sort of inherently there in the way that we play and the way I learned how to play music and stuff like that and think about music. From there I try to imitate my rock ‘n’ roll idols when I’m writing songs for Sheer Mag and try to rip off the way that The Clash or AC/DC would think about songwriting. When you rip shit off you never do it exactly right anyway. It always comes through whatever lens you view it through. So that’s probably how we get the combination.

You guys get booked at a lot of hardcore fest and DIY punk gigs playing rock and singing about love. How’d you bridge that gap? A lot of hardcore people might not admit to liking hard rock but they’ll all admit to loving Sheer Mag.
Tina: They’re all our friends. I think everybody’s got a sweet spot for that kind of music.
M: When I was, like, 20 and 21 I thought the Beatles sucked and stuff like that but then I turned 22 and I realized that I liked most of my dad’s music. I feel like a lot of people mature a little bit and turn the corner on feeling like they had to reject hard rock music from before ’77 and shit like that. People are more comfortable liking the music that they’re parents like.

What’s it like to go from playing New York’s Alright/Damaged City Fest to playing Coachella?
M: It’s definitely a little weird.
T: Coachella sucks a lot more. It’s not as fun and the other ones are, like, the most fun ever.
K: It feels like work even though they make it really comfortable for you at those festivals. Not to complain about it, like, you get a trailer, all the food and drink and shit but it’s definitely a weird environment to be in.
T: People also don’t give a shit about you. At Coachella they don’t give a shit! Maybe a handful of people but most of them are just there to be seen in their white tunics.

You guys released a few rad 7"s over the past few years. What took so long for  the LP?
K: We were just waiting because we knew we wanted to do it right. Not to sound cliché but we didn’t want to have one of those cop-out LPs that’s, like, eight songs or something. I wanted to make sure we had, like, three 7"s worth of good songs but all in one. We didn’t want to wait super long to do it because we wanted to tour, play shows and be a band and have stuff coming out for people. I was writing songs for this in the background all along. We took a good half of last year to just bang it out once we were ready and now it’s ready to go.

My favorite track on the new album is “Meet Me In The Street”. Killer riffs with tough lyrics, perfect combo. What are the key components to a good rock song?
K: I mean, it’s not rocket science. With a song like “Meet Me In The Street,” I don’t want to say we dumbed down but sort of simplified stuff. Like, let’s not take forever to write these riffs and not worry about it too much and lets just do a more of like you can predict where the song goes and it’s satisfying in a different sense. I’d say it’s just the right riff over the right chorus and the right structure. It’s just the tradition of learning from what you love.
M: I’d say structure and compelling theme in  terms of lyrics and something that’s not  ambiguous. That song is pretty clear cut. There’s not a ton of interpretation. It’s about going to the inauguration day protest in Washington DC. Lately I’ve been trying to leave ambiguity out of my songwriting and make my meanings more concrete.

The vocals are amazing. What’s your go-to karaoke song?
T: Shit—uh, it was “It’s Raining Men” for a long time but I don’t know. I have a lot of go-tos—
K: That’s a loaded question.

Alright, well I’ve got another loaded question for you. Collectively, who are your favorite rock bands or biggest influences?
M: Between all five of us, it’s probably something like The Clash, The Ramones, Metallica—
K: I like a lot of ’70s rock. One of my favorite bands is ELO in terms of songwriting. Dire Straits, Queen, I don’t know—a lot of stuff like that. We get comparisons to Thin Lizzy all the time, so i gotta throw that in.
T: I love Thin Lizzy. I love The Band, Etta James.

Thin Lizzy is my favorite band but I also hear some AC/DC in your music.
M: Yeah, for sure. It’s honestly like that list of 100 bands that you would expect to be there.
K: Except no Aerosmith or Eric Clapton. I wish I had some more secret missing-link bands that I could put in there that would surprise everybody.
T: The Runaways, Heart, they’re not saying any bands with girls in them but I will.

It seems like you’ve getting some well deserved recognition. You guys did  Seth Meyers and stuff like that. How far do you want to take it?
T: We’re taking it all the way!
K: To the top, baby.
T: We’re getting a Grammy this year.

Anything else you guys want to say?
M: Fuck the Nationals!