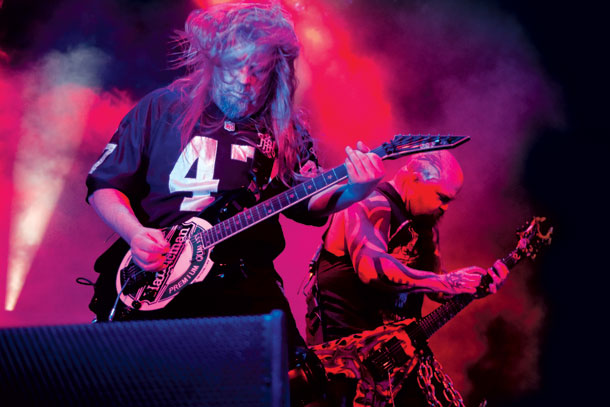 "It’s still about speed and heaviness but  there’s also definitely a group soul."

While many metal bands grew soft with age or just disappeared entirely, Slayer has kept with the same formula that got them started: Play fast and hard and don’t ever look back. If there’s ever an example in music for “if it’s not broke, don’t fix it,” it’s Slayer!  —Joe Hammeke

One of my favorite things about Slayer is your live show. You hardly ever talk and you rip through songs. The last time I saw you guys in San Bernardino, some guy ran out on stage while you were playing and you stopped, pushed him off, and went right back to playing. You didn’t even skip a beat. What happened?
Tom Araya: I saw him come up on stage and I looked at him, like, “What are you going to do?” He was standing outside of my perimeter, which was on the other side of my monitor, and the minute he lifted his leg up to take a step over my monitor was the minute that I knew he had to go. He just rolled off and I kept on playing.

What album would you tell kids to  pick up who’ve never listened to Slayer? The new one, World Painted Blood,  or would you tell them to listen to one  of your earlier ones like Hell Awaits or Reign in Blood?
I would tell them to pick the new one.  This record is fucking—I mean—I’m a fan,  and to me it’s an amazing record. And I’ve never really had that feeling. In all honesty, if someone were to pick up this record  they would be getting Slayer. This record is fucking amazing.

I watched a Slayer interview from 1985 last night. In it Dave Lombardo said that you guys would never change your style of music, and here we sit—this new album’s just as awesome as Hell Awaits. In that same interview you guys said it was all about speed.
It’s still about speed and heaviness but  there’s also definitely a group soul.

I’ve read Internet rumors that this may be your last album, or that you’re going to do a trilogy of new albums. Any truth to these?
I don’t know where the trilogy thing came from, but I know that we had a 10-album deal with Rick Rubin, and this album is the tenth. So what we do, how we do, and whom we do this next record with? I don’t know. All I know is we’re going to do a tour. We’ll do this tour and finish it, and if someone asks, “You guys want to do another record?” Then I’m sure we would come up with music for the record. That’s how it has been with everything we’ve done. The only time that we wanted to record was on the Christ Illusion album. That was the only time that we wanted to record, where we said, “It’s been long enough.” But usually it’s, “You guys want to do another record?”

Was that because Lombardo came back,  or because it’d been so long since God Hates Us All?
No. When Dave started playing with us again  we were auditioning drummers, but finally we just stopped because he said he would do the record. It wasn’t planned; things come up and opportunities present themselves and we roll with it. We knew we wanted to be a band and get a deal with a record label but we didn’t really do anything to pursue it other than do shows. That’s just how it’s been with this band, which I think is cool.

Are you a reader?
Yeah, sometimes. I find books in the airport, but sometimes I’ll seek out certain books because I’m in an area where you’re more likely to find certain things. We get censored quite a bit here in America. There are books you can find outside America that speak openly about what’s going on inside America, and you don’t find those here.

If you had to pick one serial killer, who would be the most intriguing to you?
That’s a tough one because there’s a lot of crazy fuckers out there. One would be Ed Gein because of the stuff he did with the body parts, using them as lamp shades and shit. And peeling complete faces off of heads. But I guess out of all of them,  it would have to be Ted Bundy. Because he was slick—no one knew. He knew how to talk, and if you know how to talk to people, they’ll listen.

Do you have to do any neck exercises?  Every time I see you your head is just going non-stop, and I know I wake up with a horrible bangover, so how do you do it?
I don’t, but I should. Right now I’m suffering.  My best guess, because I’ve been to the doctors already, is a pinched nerve right at the base of my fuckin’ neck that radiates down my arm.

Is it starting to fuck with your motor skills?
It’s not fucking with my motor skills, but it’s part of my war wounds or my battle scars.
Do you think you’ll ever go down the same path as some of the other great metal bands of your time—Metallica, Iron Maiden, etc—and cut your hair?
It’s my strength! By cutting it it’s like Samson  and Delilah.

Any final words for the kids out there picking up this issue of Thrasher?
Buy the album, it’s fucking amazing. And while you’re at, it buy all the rest! —Andrew Cannon
© 1981–2021 High Speed Productions, Inc.