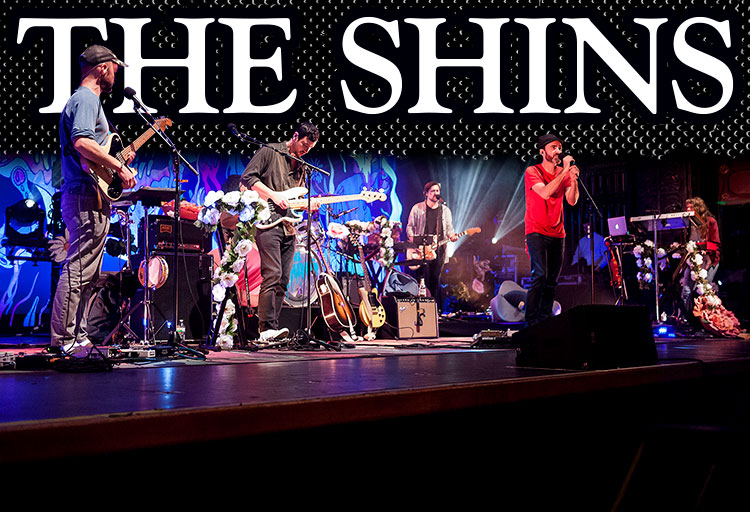 The Shins have been making some of the best independent pop music for years and their most recent release, Heartworms, is no exception. James Mercer’s empathetic approach to songwriting continues and is coupled with a wide range of musical approaches. We recently caught up with him after their show to discuss the new album and his love of skateboarding. —David Sypniewski

You’ve had some recent changes to the lineup. What are the updates?
Yeah, we lost Joe Plummer because he’s in Cold War Kids and they had a number one hit and stuff and he was just busy with them and they were recording a record right when we were starting to record ours. It just was conflict there, so he’s with Cold War Kids and Richard Swift is in The Black Keys and he’s doing The Arcs with Dan as well, and he’s producing and mixing all kinds of records, so he’s busy now too. Yeah, so we’ve got Patty King who’s amazing on keyboards and playing violin and singing. Mark Watrous is still with us; Yuuki Matthews is still with us. Then we got Jon Sortland who was in Broken Bells last tour and Casey Foubert.

It’s safe to assume that your new song “Mildenhall” is about is your discovery of music and skateboarding.
I was a skater and that kid in class looked at me and thought I was maybe hip and would be into what she was into. It’s one of those things: you’re in high school and you’ve got to pick and choose who you’re going to be friends with. You’ve got to be careful, right? That literally happened. Somebody gave me a tape and it was The Jesus and Mary Chain and then, through skating, I met just a few friends. There were probably five of us who were really skaters in that high school and just somehow, it’s hard to say what it is, but there’s always that link between skating and music. It’s funny because when we were at Tony Hawk’s place today he played the Dead Kennedys and I was, like, “Goddamn it, man, that’s high school.” That, along with a lot of other stuff, though, too. I got into playing guitar in there somewhere and started trying to learn Smiths songs and stuff like that. I was one of those kids who had friends who were really into hardcore punk stuff, like the Cro-Mags and stuff, and I’d totally be down with them. Then I’d listen to Echo & the Bunnymen and The Smiths and stuff like that.

The Descendents helped me through the emotional teenage years.
Music can turn some shit that’s basically a real negative thing that you are going through or something you might do and it can kind of pull a rabbit out of the hat. Descendents are a great band to do that. They represent kind of nerdy, goofy guys who are filled with angst and they want the same shit everyone else wants. They want to have a life. We all want to be accepted, we want to have a girlfriend and we want to deal with this crazy fucked-up thing that it is to turn from a kid into an adult. Especially in this fucked-up society that doesn’t give a fuck about you either way. Music turns into something beautiful. Skateboarding, it really saved me too. It pulled me out of social ineptitude. It gave me an athletic outlet. The organized athletic system of school doesn’t work for everybody. If you’re not a certain body type or a certain sort of athlete you can’t be on the fucking football team. It ain’t gonna happen. You still might be a scrappy type of motherfucker who can do some shit, but there’s nothing sanctioned for you. Skateboarding, you find to be a wonderful outlet. Skateboarding is so stylistic. It’s an aesthetic thing as well as athletic thing. There’s something about skating that is art. Skateboarding is everything.

You just made a video for “Name for You” with Savannah Headden and Samarria Brevard skating in it. What the song about?
I’ve got three daughters and I think that when you think about them growing up and stuff, I just— I had this song and I don’t know exactly why but the chorus just came out, “Name for you, we’ve got a name for you.” I was thinking about the concept of slut shaming that you’ve heard about and I remember being a young guy and entertaining that double standard that we apply to women, and it’s just funny how my perspective has changed because it really is, I think, so unfair. I guess I was thinking about that and just wanting to write something that was encouraging and just cheering on young women and maybe just identifying or empathizing with the plight of being a young woman today.

At the show tonight, you said that your new favorite song to play is “Fantasy Island.”
Yeah, we’ve been really enjoying it. That’s a new one and we’re playing it even though it’s not out yet. I know what it’s like to be in the audience and you hear a new song from some band and you really want to hear the old stuff, so I’m a little apologetic about it. It’s, like, “We’ve got a new song we want to play you, just please sit tight, wait for a second.” It was really good I thought. A friend of mine told me, “You shouldn’t play so many new songs.” I was, like, “God, what do we do? We’re here to support this record; it’s almost out; it’s going to be out.”

Are there those kind of rules when you’re playing, like, you have to make sure to play the hits?
Some bands go and they’ll just play the new record. They’ll play the new shit and hardly anything old. I’ve seen bands like that and it is a little tiresome.

Well, how long do you have to be a band before you do the full album?
Like, go back and play an album? Right, that whole thing. I don’t know; that is pretty cool. I went and saw The Zombies and they did Odessey and Oracle and then they played a bunch of songs afterwards. It was pretty rad. We could probably do that.  Oh, Inverted World would probably be the one that people would want to see us do the whole record.