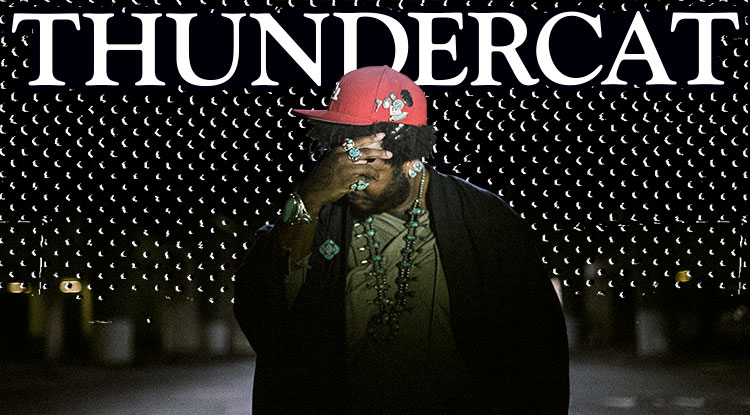 Thundercat commands a bass almost the same way as a conductor commands an orchestra and in a way, his music is just as complex. On his latest solo project, Drunk, each of the 23 tracks soar with intricate parts and clever lyrics with guest spots from Kendrick Lamar, Kenny Loggins, Wiz Khalifa, Steely Dan’s Michael McDonald and Pharrell. But Thundercat’s career goes way deeper than his solo material. The former Suicidal Tendencies bassist has played bass for everyone from Erykah Badu and Flying Lotus to (most recently) N.E.R.D and Red Hot Chili Peppers. He’s more immersed in  the music industry than most people may realize. We caught up with the 33-year-old  Los Angeles native to talk spirituality, Dave Chappelle and why sometimes you just gotta pick your nose. —Kyle Eustice

How important is your spirituality in music?
It’s very important. I feel like this is the right connection. They work together. There’s no way it’s not gonna come through in the music. It’s how you were raised, what you choose to pick up and what you choose to believe. These things all factor in your processing I think at different levels and different points in life. You try to hold onto yourself. You hold onto the way you’re brought up because if you don’t know where you came from, you don’t know where you’re going.

We are living in a really weird time. We have all these really polarizing things happening in society and it’s kind of an ugly place right now. How do you navigate around all that and how has it affected you this year?
Reality is, we know, the biggest juxtaposition—trying to have a religious standpoint and trying to maintain a sense of being in the now, too. The reality is that, people are people. We’re human. Humans are crazy. We’re crazy as hell. It just comes with the territory. If you don’t experience crazy in your time, you are a lucky person. I watched Dave Chappelle’s stand-up recently and he’s the most sane guy. When you hear him talk, everybody can see. Even if he has these viewpoints that every now and again rub people the wrong way, his sincerity and genuineness about how he presents himself, it’s the same as  I feel. That’s the most sane person I feel like I’ve seen in the last year.

He’s very logical.
Yeah. Everybody says, “Well, he walked away from the millions.” It takes a person with that kind of integrity to see straight. And a lot of the time I think that can translate over into how people deal with each other. We could look a little bit past the money, look a little bit past the idea of the success and fame that comes on whatever level it is of what we do. You can be a little bit more forgiving of people because the reality is everybody wants it. Like Andy Warhol said years ago, someday everybody’s gonna be famous and that’s kinda where we are now.

Right, especially with social media.
Yeah. Everybody’s on a soapbox. Everybody’s just saying anything they want. It’s a bit of a double-edged sword because it’s kind of what’s created the backdrop of what we’re dealing with now. But, at the same time, it’s that kind of energy that helps to bring creative things about.

Totally. And propel change, too.
Yeah. That’s just how it works. It’s just an unfortunate by-product of what we’re experiencing now. Truth is, you could also turn  it off.

Isn’t that kind of what your album Drunk is about?
Yeah, it is.

I think it’s the second song “Captain Stupido” where you’re talking about you get up, look at your screen and you’re watching life go by.
Yeah. It’s not saying you gotta be on the front lines with a gun, but at the same time, you can turn your computer off for a second. You can just sit there and do nothing. You could pick your nose and get it as clean as possible.

Just for like a good five minutes. That could be cathartic.
The best thing ever is when Apple was, like, “Yeah, we intentionally slow our old phones down.” And it was, like, well, you guys sucked anyway. Now you just admitted you suck.  We already knew you sucked but geez, thanks for making sure you stamped it in gold.

Speaking of stupidity, did you see Trump’s response to the author of the new book Fire and Fury?
Oh my God. Sometimes it’s almost like a car crash. I can’t look away.

He tweeted something like, Michael Wolff is a total loser. Who says stuff like that?
What, are we on the set of Clueless?

It’s to the point of comedy for me almost.
That’s what I’m saying. I think people are crazy.

The only thing you can really do is laugh and smile through it sometimes. That’s all you really have, you know?
You gotta laugh. You gotta be able to laugh.

That’s what I’ve always liked about your music. The music itself is kind of cerebral, but the lyrics are really funny, but you have to pay attention.
Yeah. Honestly, I just want a good healthy balance for how everything functions. The big important thing is being able to laugh. Because I think that’s gonna be the key to 2018, ’cause this shit is about to be really funny.

Well, some people probably thought Reagan was the devil, too.
Yeah, you know? People can’t wait to talk about how terrible Obama was. It’s almost  like when you can see it in front of you, even with the terrible things that could have  happened that didn’t happen, the reality is what he did, he brought us together. It’s one of those things that’s, like, again, the ups and downs are gonna keep coming. You just gotta try to laugh.